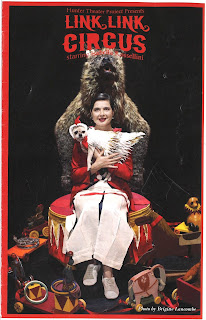 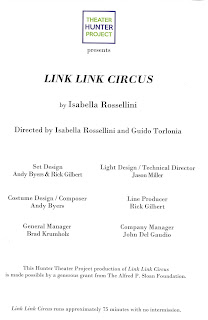 Renowned actress Isabella Rossellini, who notably starred in David Lynch’s Blue Velvet as the mysterious lounge singer. Dorothy Vallens, is a lifelong animal lover, now completing a Master’s at Hunter College in Animal Behavior and Conservation. She has transformed her studies into a 75-minute solo performance at Hunter College running through early May. Link Link Circus, directed by Rossellini and Guido Torlonia, is an absolutely charming “theatrical conference” on Rossellini’s academic research and conclusions which she performs as the ringleader of a children’s circus. Coltish and didactic, charming and effective, the work is a must see for any animal lover.
The title harkens to Darwin’s linking of primates to humans and his theory of evolution. This, though, is Rossellini’s classroom, and her lecture covers the breadth of her personal and academic interests: addressing animal behavior, the relationship between animal and human anatomy, animal imagination, and animal consciousness. The work, though, is rarely desultory, and while silly, never capricious. An erudite, natural performer who communicates with great confidence and focus, Rossellini is refreshingly playful and informative.
Clad in a red ringleader coat, Rossellini waltzes around the stage. Red surrounds her, covering the performance space at Hunter’s Frederick Loewe Theatre. A crimson toy train demarcates the lip of the stage and a red toy piano lives center-right, no more than a foot high. Five red, cardboard mannequins of academics who contributed to the field of animal behavior studies constitute the upstage line. Upright is Aristotle, followed by two medieval monks, Beatus and Angelicus. Up left is René Descartes, while right of him is B.F. Skinner. The set, designed by Rick Gilbert and Andy Byers, with lighting by Jason Miller, evokes a circus-like atmosphere.

Aided by her performance partners, Rossellini teaches us about trophallaxis (the mating ritual of defecating on a partner) and “cryptic female choosing” (a complicated anatomical method that allows female animals to choose their partners) and many other subjects. I particularly enjoyed the section on culturally constructed vs instinctively generated gestures in apes. Byers, also a skilled puppeteer, helps create small constructions or diagrams that Rossellini uses in her lessons. An incredibly adorable dog named Peter Pan (Pan for short), is dressed up in different costumes to help Rossellini teach her subjects.

The performance works because Rossellini is genuinely fascinated in the subject matter and shares it with an open heart. Her interest is infectious, and we get excited as she does. Her passion for the subject has led researchers to name a new species of beetle in her honor, Ptomaphaginus Isabellarossellinae, which seems extremely appropriate.

The last bit of research Rossellini shares feels particularly personal. She reverses the common trope of “humans have domesticated the dog” to “dogs have domesticated humans,” as reflected in how we talk and cuddle canines as if they were babies. This conclusion rests at the heart of our love of animals as well as at the forefront of the scientific community’s developing understanding of animals. This is exactly where Isabella Rossellini belongs, and every animal lover belongs at this show.

Aron Canter studied theatre theory and alternative performance at The New School and is working toward an Art History masters at Hunter College. He has been a theatre and art critic, a supernumerary at The Metropolitan Opera, and currently works as a medical professional. aron.canter@gmail.com