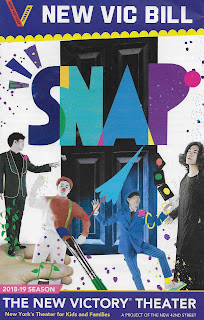 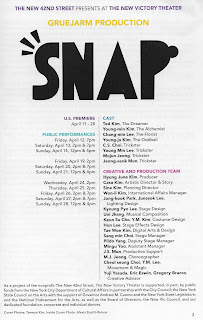 By the authority vested in me as a former young actress who moonlighted in clowning for five minutes and used a magic kit to perform a few tricks at birthday parties in the outer boroughs, I shall now review a magic show.

Brought to the New Victory Theater by Korea-based GRUEJARM Productions, SNAP’s something-for-everyone assortment of magic acts delivers on its promise to create the fantasy of an altered reality through mime, fairytale storytelling and Chaplinesque vaudevillian comedy.

If you surveyed the family-comprised audience on their favorite act, the answers would likely vary a whole lot. The youngest attendees were full-on roaring at the Tricksters’ slapstick antics, wonderfully delivered by C.S. Choi, Young Min Lee, Mujun Jeong, and Jeong-seok Mun.
Adults were transfixed by dream-like acts from The Alchemist (Young-Min Kim) and The Florist (Chang-min Lee), who evoked magic with sand and rose petals in acts practically cinematic in their beauty and poetry, accented with the majesty of Uni Jhang’s classical music underscoring.
My tween and teen agreed on their favorite act: Secret of the Atelier, a reprise of an earlier scene, Haunted Atelier, that provided a different perspective on tricks we’d already seen. Plenty entertaining for everyone, but with a nuanced sophistication for the older guests.
As any magic show should, SNAP offers plenty of “how did they do that moments?”—a standout for me involving a disappearing shoe—but what sets this production apart is the engaging narrative it creates. The tricks are so seamlessly integrated into scenes that the magic becomes almost secondary, as if the tricks are simply lines of dialogue, a magical quality in a nonverbal production.
Clever is another word I’d use. There’s a throwback video game sequence that’s a real crowd pleaser featuring The Dreamer (Ted Kim) and Jung-Kook Park’s exciting lighting. The Oddball’s (Young-ju Kim) next-level juggling is both impressive and a hoot. A recurring umbrella and adorable red silk scarf become characters in their own right. With this elevated level of entertainment value, SNAP doesn’t need to resort to a guy swooshing around a . . . er . . . larger guy’s belly rolls to earn laughs (though laughs it sure got). My 10-year-old whispered, “That’s mean.” I agree.

But don’t listen to me. Here’s a sampling of comments I heard shouted by miniature critics at the New Vic:

Do that scene again!
That’s real magic—not just a cheesy kids’ show.
Wow! Wow! Wow!
How is that funny? (Hey, there’s always one.)

Reading the program bios, I was stricken by one commonality among the performers: most have been practicing magic from a very early age. Between the highly amusing production and corresponding magic-themed activities offered to children both before and after the show, here’s hoping the New Vic keeps pulling budding young magicians out of its hat.