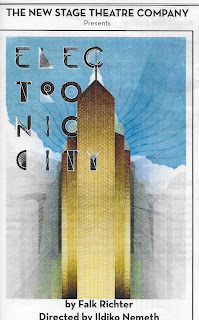 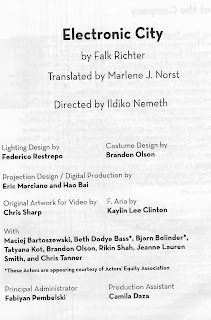 Since its premiere in 2003, Electronic City by Falk Richter has been translated into 40 languages, and I wonder if it makes sense in any of them. One can argue that I should know what I’m getting myself into when I sign up for experimental, avant-garde theatre touted as “absurdist humor.” To that I say touché—take my review with a grain of salt from someone who is perhaps not the target demographic (though I do very much like the New Stage Theatre Company’s performance space, nestled in a nifty basement beneath a Upper West Side hostel).

The story revolves around Tom (Brandon Lee Olson), a man who travels so much for work that all the airport business lounges and hotel rooms look the same to the point where he forgets where he is. Poor baby!
Drawing more empathy is the character of Joy (Jeanne Lauren Smith), a cashier whose register breaks down, causing hysterics as a bunch of businessmen queue up impatiently. Somewhere in there is a sort-of love story between Tom and Joy, who enjoy a quick airport romp and attempt to continue their courtship long-distance. Too bad Tom can’t even remember what country he’s in, let alone his girlfriend’s name.

Director Ildiko Nemeth has updated the piece to reflect modern advances in technology, but it feels like the changes have been slapped on in the form of Facebook and Instagram projections on the walls (projection design by Eric Marciano and Hao Bai). This show is determined to show how disconnected and alienated we all are in the digital world. However, without exploring social media’s role in making connections, it’s even harder to extract meaning from an already abstract production. Why should Tom forget where he is in an era where connection is more readily available than ever?
I know, I know. I’m taking this plot point too literally. It’s not about being physically lost, silly; it’s a metaphor. One that’s played over and over again but in different ways, sometimes with random words running across the walls, sometimes with video projections of emojis, and almost always with the cast roaming frenetically about the stage like they’re participating in an acting class improv.

The cast wanders around in matching black clothing and wigs to suggest, I guess, the sameness of all us robots in the fictitious-but-not Electronic City. For me, the actors are this production’s greatest asset, as they’re fully invested and energetic.
The staying power of Electronic City and its many productions around the world prove there’s clearly a connection and appeal for audiences that appreciate multimedia theatre and dark/absurd humor. If you’re in that demographic, you may enjoy your experience. And if not, there’s an affordable hostel upstairs if you and your date wish to redeem your evening.