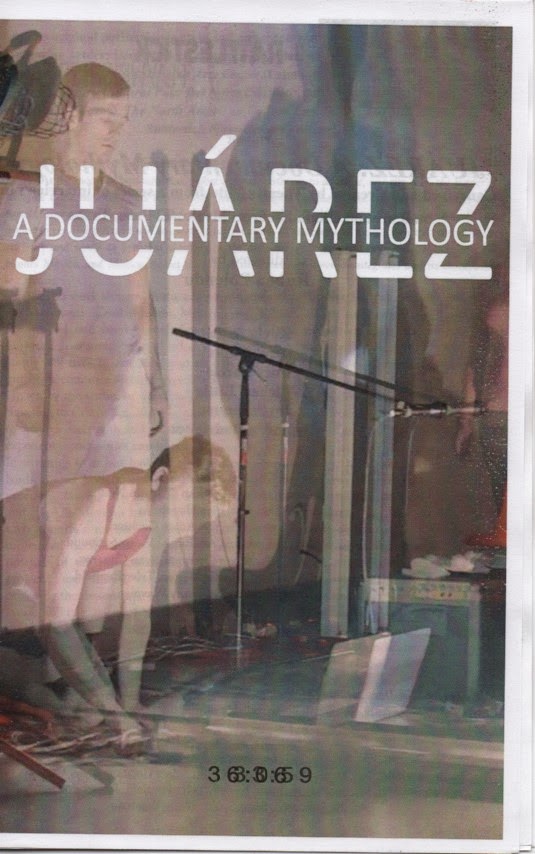 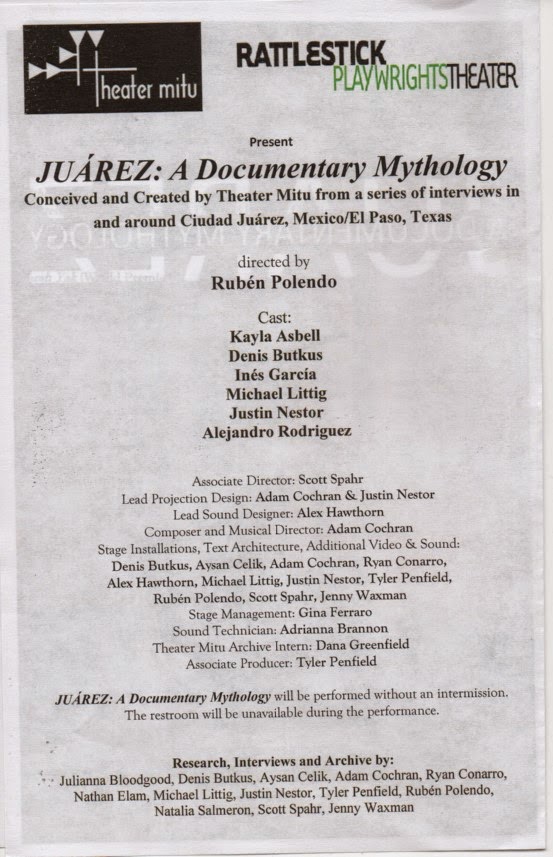 Docudramas come in various styles and shapes, and some subject matter is better suited for one than another. Take, for example, JUÁREZ: A DOCUMENTARY MYTHOLOGY, now playing at the Rattlestick Playwrights Theater. This is a devised theatre piece dealing with the story of the Mexican border town of Ciudad Juárez, just across the border from El Paso, TX, its sister city. While Juárez became known over the past three decades as “the murder capital of the world,” El Paso was touting itself as the safest city in America, which claim can actually be documented. The socially conscious experimental theatre company Theater Mitu, which developed the piece at various institutions in Lebanon, Abu Dhabi, Mexico, Texas, and elsewhere, performs it in a markedly stylized way under the vision of director Rubén Polendo, who says in the program note: “I made this work with the company members . . . as a way to rediscover my hometown—Ciudad Mexico—and El Paso, TX. . . . For years I had been overwhelmed by news about the violence, cartels, kidnappings, murders, drug smuggling and other woes that plagued this border community.”

The company approach immediately reminded me of my advice to a friend who just the other day asked for my feedback on the outline of a five-hour docudrama he’s writing about an important Holocaust-related historical event. I wrote to him, in part:


I am very doubtful that it should be dramatized as a straightforward docudrama recreating in verbatim detail what happened. . . . It needs an imaginative theatricalist approach that condenses the material into no more than 2 hours, with characters and scenes that are overtly theatrical and nonrealistic; with a cinematically episodic, swift-moving style (Living Newspaper comes to mind) using the whole arsenal of projections and lighting; with actors playing multiple roles with minor physical changes, music, and so on. There also needs to be ironic humor. . . .We go to the theatre for dramatized history, not recreated history.

Apart from there being barely any humor, ironic or otherwise, JUÁREZ essentially follows this template, even though its subject matter covers several decades while my friend’s play focuses on only six days. Given Theater Mitu’s ambitious project to document the local people’s responses to Juárez’s decline into crime and a level of violence whose cruelty often exceeds that of ISIS, the approach fits the subject matter, but also reveals some of the pitfalls such stylization can create. A more successful recent blending of theatricalization and realism to tell an historical story would be Robert Schenkkan’s ALL THE WAY, which doesn’t allow conceptual creativity to get in the way of the narrative material.
Theater Mitu has done an admirable job of research and documentation, including having its company members visit Juárez and interview “anyone who would sit down and talk to us, to create a piece with and about its citizens.” Its six actors, Kayla Asbell, Denis Butkus, Inés Garcia, Michael Littig, Justin Nestor, and Alejandro Rodriguez perform a text developed by Messrs. Butkus, Littig, and Nestor, along with Aysan Celik, Adam Cochran, and Ryan Conarro. They each play multiple anonymous roles, identified on a flat screen hanging over the stage by their ages and professions (journalist, activist, writer, librarian, teacher, graffiti artist, political scientist, etc.) or some other marker, such as father, great grandmother, and so on. Mr. Polendo narrates large sections on what I assume is a recording.
There’s a note in the script explaining that “The text is never performed. It is transmitted, conveyed, offered, but never emoted or inhabited. They speak as witnesses.” This seems a bit disingenuous because, whatever the intentions, the actors do indeed perform, if only unconventionally. They alter their voices to play the different roles, for example, not realistically but in a variety of offbeat ways, using microphones that sometimes greatly alter how they sound (including making an actress sound male). And there are choreographed sequences that, regardless of their alienated manner, are indeed “performed.” The problem is that, interesting as these choices seem at first, they become, like so much of the production, mannerisms that point to the ingenuity of the staging and acting rather than as a means for furthering the emotional impact of the material.
The stage (described in the script as looking “more like a rock concert than a theater piece”) is essentially undecorated, but filled with music stands, amplifiers, microphones, portable light stands, and folding chairs. A silver tarp-like screen covers the rear wall for the rather extensive and sophisticated projections (designed by Adam Cochran and Justin Nestor), and a number of smaller screens are brought on and held up for other projections or different purposes. Alex Hawthorn is listed as the lead designer of the sound, which plays a major role in the show. The show’s aesthetic is more “found” than “designed,” with a large number of company members credited for “Stage Installations, Text Architecture, Additional Video and Sound.”
Much of what we see and hear concerns the nostalgic memories of Mr. Polendo for Juárez when he grew up there before the era of the drug cartels. These memories (and those of other locals) are contrasted with information, fed to us in numerous ways, from videos, projections, maps, and shadow puppetry, to songs and straight narration. We’re introduced to a wide assortment of perceptions and particulars about the causes behind the city’s decline, with most of the blame going to the North American Free Trade Agreement (NAFTA) and the development of manufacturing plants (maquiladoras) to which American companies outsourced thousands of jobs at ridiculously low wages ($5 a day) to needy Mexicans, who rushed north to take employment in a city whose infrastructure was completely unequipped for such a mass migration of workers. We’re told that the employment of women, traditionally stay-at-home mothers and housekeepers, led to feelings of emasculation by the male population, and a consequent rise in incidences of “femicide,” i.e., the killing of women merely because of their gender.

In a program note, much of it reading like grantspeak, Mr. Polendo says the production’s goal is to theatricalize “what we witnessed; to convey in a theatrical grammar what this place feels like; how the offices, streets, cafes, homes entered our bodies—what we as corporeal creatures witnessed—the artist as archive.” While I learned a lot about Juárez, I didn’t share the company’s experience of what the city feels like to them. Instead, that feeling got lost somewhere in the distanced and self-conscious acting style and the tangle of technical and aesthetic decisions that often took precedence over what the witnesses were saying. The most affecting elements were not so much about the accumulation of corpses, the bloody rivalry between cartels, and the conflict between the citizens’ needs and the government’s inability to satisfy them, but those in what is essentially the play’s frame, the story of Mr. Polendo’s charismatic father (seen in multiple videos), whose wisdom acts as a kind of through line in helping his son make sense of Juárez’s story.
Toward the end of this intermissionless, 90-minute docudrama, we hear some encouraging news regarding Juárez’s future; we can only hope that the situation continues to improve.