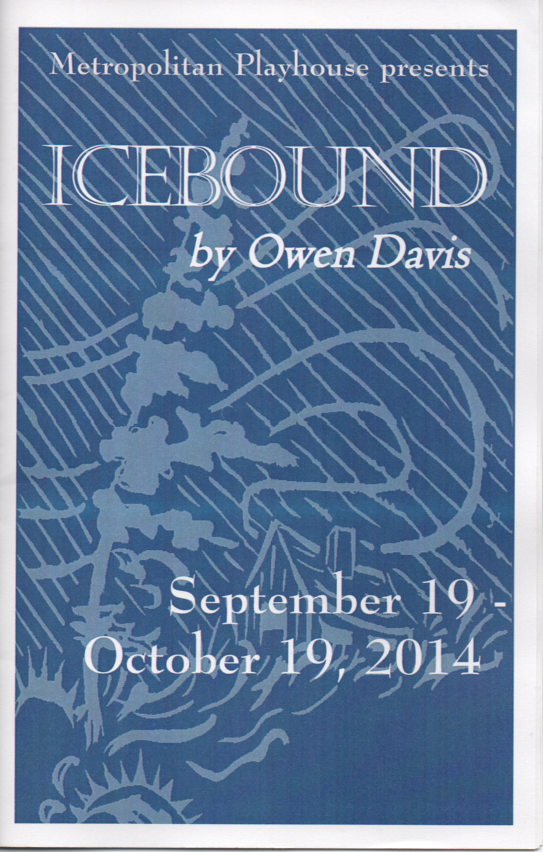 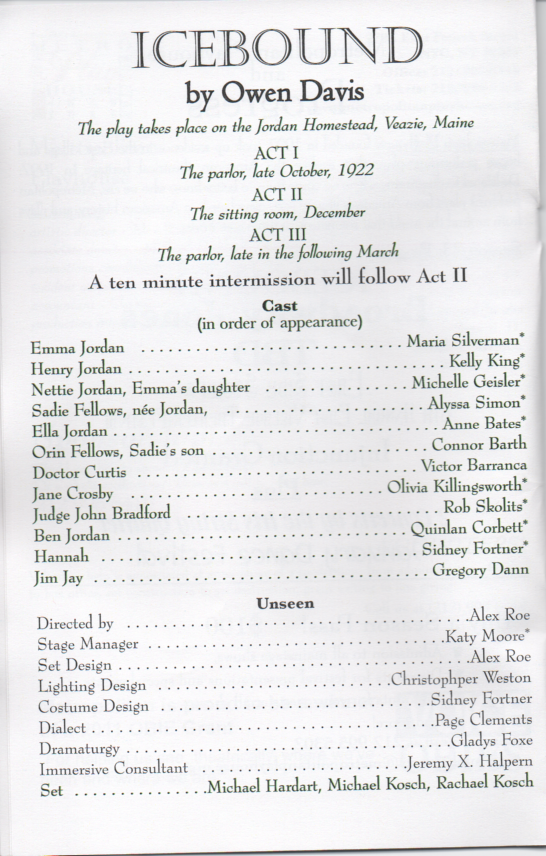 If you look at the list of Pulitzer Prize-winning dramas since the award was first given to a playwright in 1917 you’ll find a few plays you probably never heard of or, even if you’re a theatre professor, never read or saw on stage. How about the very first, WHY MARRY? It’s likely that the 1923 winner, ICEBOUND, by the prolific Owen Davis, may also be unfamiliar to you, but you now have an opportunity to see it if you scoot on down to E. 4th Street in Alphabet City, where the diminutive Metropolitan Playhouse has thawed it out and attempted to give it new life, as they have with so many other forgotten plays over the years. The production itself is imperfect, but not so much that you can’t get a clear idea of Davis’s intentions. Davis, by the way, was previously the author of dozens of popular melodramas, such as BERTHA THE SEWING MACHINE and NELLIE THE BEAUTIFUL CLOAK MODEL. His turn toward serious drama suggests the influence of Eugene O’Neill, especially in ICEBOUND, set as it is in a repressed New England environment.
When first produced in 1923 at Broadway’s Sam H. Harris Theatre (parts of which are embedded in 42nd Street’s Madame Tussaud’s Wax Museum), where its 170 performances qualified it as hit, it received only mixed reviews, despite its ultimately getting both the Pulitzer and being selected as one of Burns Mantle’s Ten Best Plays of the Year. Like so many other Pulitzer winners, its choice now seems odd when looking back on plays that were bypassed; the 1922-1923 season, after all, included Elmer Rice’s expressionistic THE ADDING MACHINE, which became a minor classic; George Kelly’s THE TORCH-BEARERS, which, while lightweight, still gets revived; John Colton and Clemence Randolph’s sex-soaked RAIN, also still produced; and Czech Karel Capek’s influential R.U.R., which gave us the word “robot.”
ICEBOUND, which a contemporary critic called a “vivid and biting study of a New England family,” is described in my Encyclopedia of the New York Stage, 1920-1930 as being about “the waiting of a family of greedy, selfish survivors for the offstage death of tightfisted old Grandma Jordan, so that they may learn what she has left for them in her will.” Mrs. Jordan, anticipating their greedy response, leaves her entire estate (apart from token bequests) to a distant cousin, 24-year-old Jane Crosby (Olivia Killingsworth), who nursed her for eight years in the small town Maine home in which the action is set.

Jane has been requested in the will to use the money to regenerate the old lady’s wastrel grandson Ben (Quinlan Corbett), a fugitive accused of setting fire to someone’s barn, and who Mrs. Jordan thinks Jane can tame and marry. Ben, who shows up unexpectedly to be there when his grandmother passes, goes to work for Jane on the farm in return for her signing his bail bond, an act overseen by Judge Bradford (Rob Skolits), who’s in love with Jane but agrees to use his influence to have Ben’s indictment squashed. However, when she discovers Nettie (Michelle Geisler), the impetuous teenage stepdaughter of Ben’s older brother, Henry (Kelly King), in Ben’s arms, Jane declares she’ll hand over the property to him and leave. Ben, who’s matured under her guidance, realizes how blind he’s been to her love, and decides to marry her, as his late grandmother had predicted.
The other family members are Henry’s second wife, Emma (Maria Silverman); the old-maid sister Ella (Anne Bates); the busybody Sadie (Alyssa Simon); and Sadie’s child, Orin (Connor Barth), whose mother is constantly reprimanding him. This bunch, whom Ben calls “crow buzzards,” are now beholden to him. There’s also a wise old family maid, Hannah (Sidney Fortner), who actually gets to deliver the tag line. ICEBOUND’s title refers to the icebound nature of the family’s hearts and souls, which are like the frozen world of a Maine winter.
Alex Roe, the Metropolitan’s hardworking artistic director, staged and designed the production. He’s combined Acts 1 and 2 into a single act, followed by a 15-minute break before Act 3 begins. The Jordan house’s two rooms, a parlor in the first and third acts, and a sitting room in the second, are indicated by simply having the actors move the same furniture into different positions, a common practice at this low-budget theatre. The audience of around 50 surrounds three sides of the set, with the upstage wall covered by an abstract painting of a bleak landscape.
This is all well and good, but because Mr. Roe apparently wants to further emphasize the close bond between the dreary, unadorned interior and the natural environment of the farm on which the household is situated, he creates a visual metaphor by putting two trees at either upstage corner, right inside the house, and covers the floor with wood chips. The odd result makes it look like the characters are living in a stable (there’s one outside).
Moreover, the dialogue says that it’s beginning to snow during the first act, so Mr. Roe actually has snow falling inside the parlor, the phony flakes falling on furniture and actors alike (rogue flakes have been falling from the start and continue to do so throughout the evening, even when the season turns to spring). These are unnecessarily distracting choices, as is Mr. Roe’s decision to have several characters read the playwright’s scene-setting descriptions at the start of Acts 1 and 3, much as a Pearl Theatre production did last year for a program of J.M. Barrie plays, in which an actor playing Barrie spoke them.
The actors offer competent performances, some more acceptable than others. Kelly King is fine as the selfish older brother, who needs to keep borrowing money from Ben to resolve his business problems; Anne Bates gives Ella, who wants money to begin a dress-making business, a semblance of truth; and Rob Skolits does well by Judge Bradford, making him both stern and reasonable. Ms. Killingsworth’s Jane is far too wishy-washy and lightweight to represent a woman who must have a spine of steel to handle her mean-spirited relatives and run a farm efficiently. Mr. Corbett simply lacks the charisma and three-dimensionality to be acceptable as both the black sheep son and the reformed lover.
The play seeks to reproduce the speech and manners of these mostly narrow-minded, religiously conservative, and stubbornly petty characters, so Maine accents should be an essential component of ICEBOUND’ atmosphere. A dialect coach has worked with the cast, but her students need more coaching as the mélange of accents—some close, some distant, and some in no man’s land—could use a dialect GPS to guide them back to the northeastern United States.
ICEBOUND deals grimly with grim small town folk, and it has some interest as a naturalistic period piece. There’s a tiny bit of humor, and the everyday dialogue sounds authentic enough. The highlight comes when the judge reprimands the blinkered Ben about how much Jane has done for him. I’m not sure Davis intended the audience to laugh as I did, but the moment underlined a problem in Ben’s character by emphasizing his utter naiveté, not a proper virtue in a romantic leading man.
ICEBOUND is the second Davis drama produced by the Metropolitan, which did his first serious play, DETOUR (1921), a couple of years ago. Now it might be fun to dig out one of his old mellers. I’ve always wanted to see BERTHA THE SEWING MACHINE GIRL.
Posted by Samuel L. Leiter at 8:26 PM