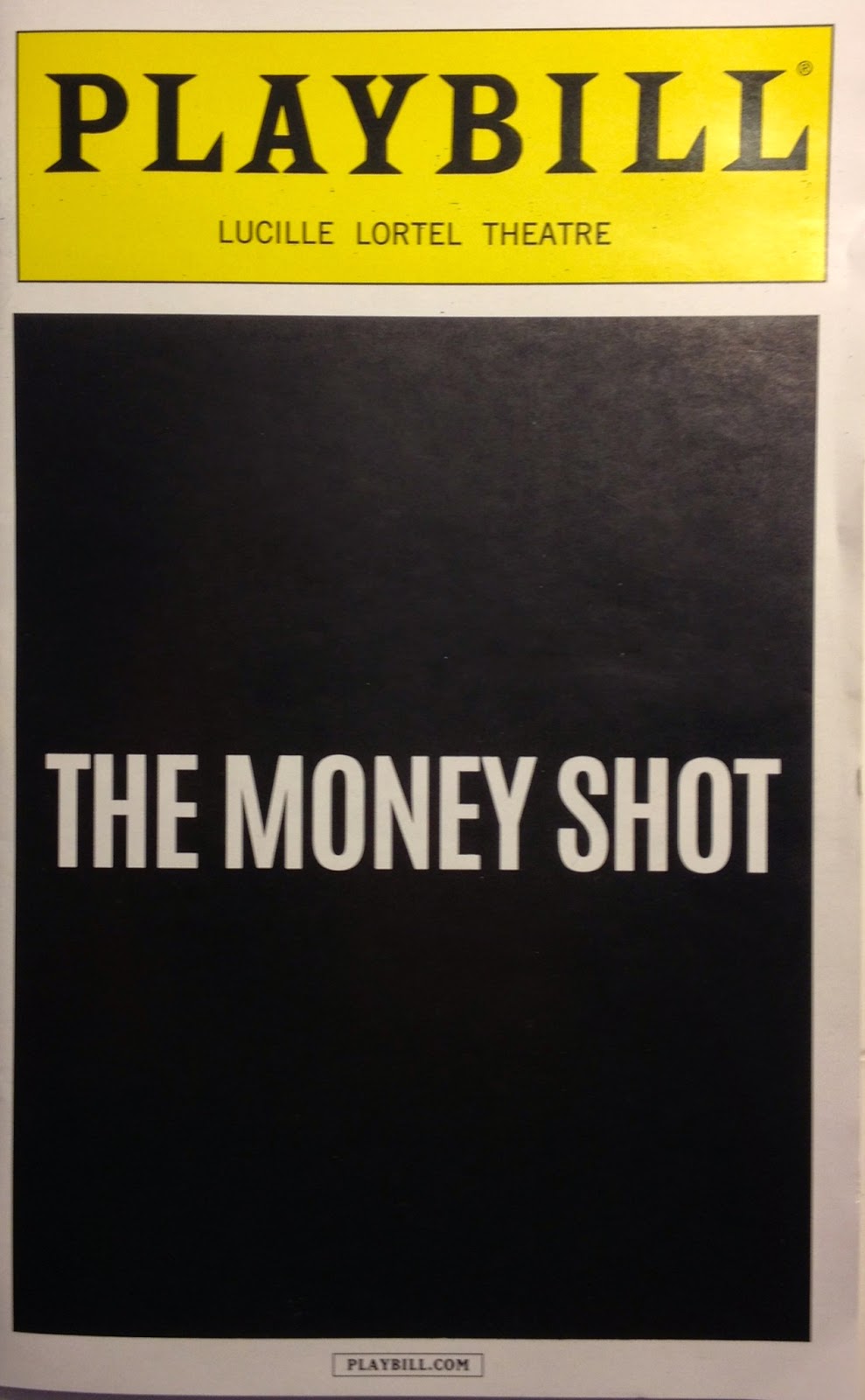 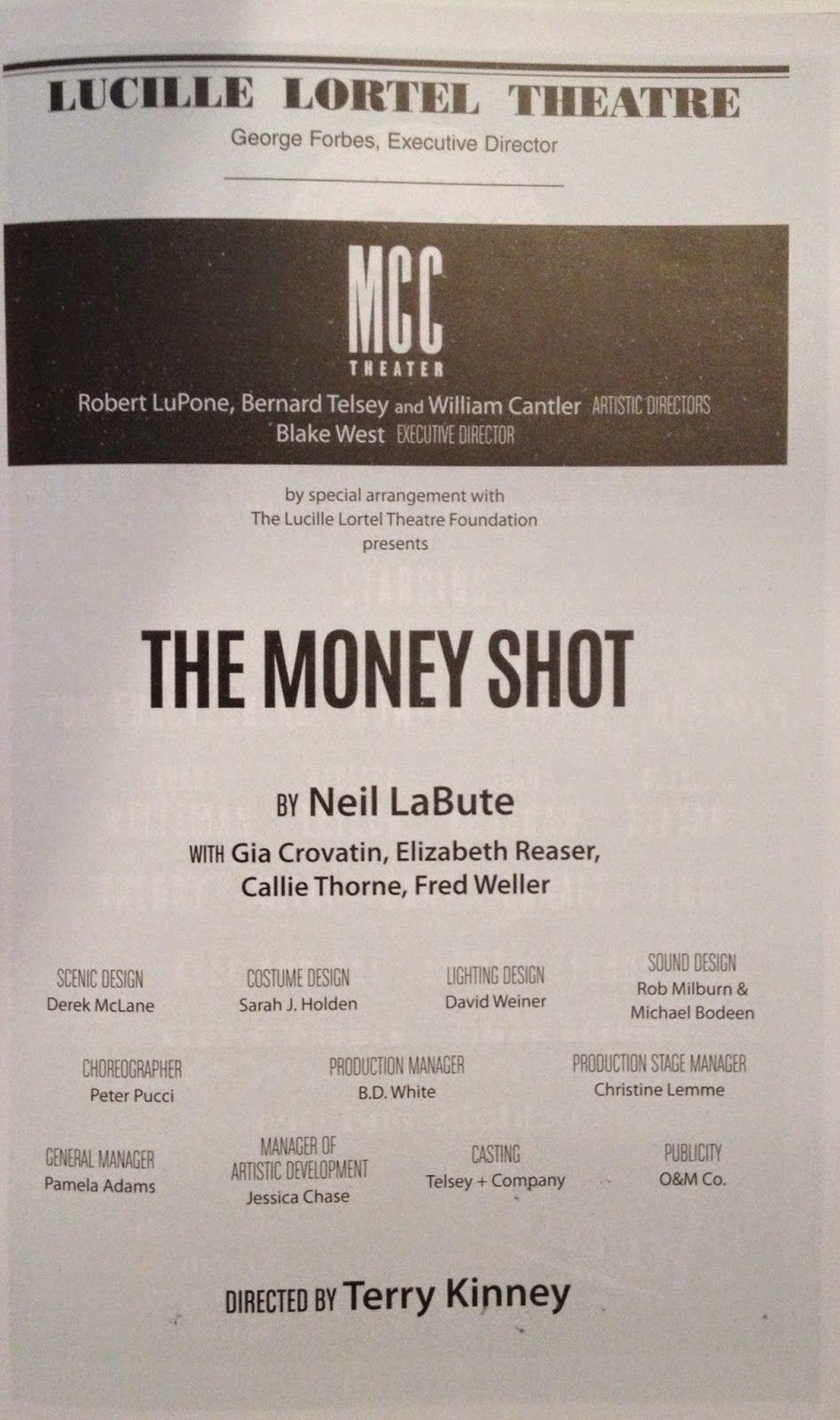 In THE MONEY SHOT, an MCC production now at the Lucille Lortel Theatre, playwright Neil LaBute thrusts the long blade of his sharpened rapier into the world of Hollywood film stars, skewering their arrogance, extravagance, solipsism, sexual mores, ignorance, and sheer stupidity, with frequently laugh-worthy results. Much of this is clichéd, of course, but it might have worked better if Terry Kinney’s pushy direction didn't put such a crimp in the hilarity quotient by allowing his actors to overplay from the very beginning, too quickly emphasizing the characters’ cartoonish behavior and thereby damaging their credibility. Given the subject of the play, you might call it a case of premature exaggeration.

Disappointed as I was, I have to admit the play is still very funny, even if much of the humor comes cheap, and only makes me long for a production that takes a dryer, more subtle approach. There are plenty of comic firecrackers waiting to be exploded in THE MONEY SHOT and to ignite them properly the play needs to create a sense of reality around the characters early on, not allow them to bolt from the starting gate in full gallop.

﻿
There are four characters in this 90-minute, intermissionless piece, all of it set in the fancy $7+ million dollar Hollywood Hills home of uncloseted lesbian movie star Karen (Elizabeth Reaser) and her partner, Bev (Callie Thorne), a film editor. Visiting for dinner and a business-related conversation are action movie star Steve (Fred Weller) and Missy (Gia Crovatin), a gorgeous blond airhead he’s been married to for a year. We quickly learn that the subject the evening is leading to is an upcoming love scene between Steve and Karen in the movie they’re costarring in, but we don’t find out until much later that the scene in question concerns the actors’ willingness to follow their artsy Belgian director’s wish that it involve real sex, ejaculation and all. Both actors, afraid their careers may be on the downturn, see the commercial potential in being the first major screen stars to have actual, rather than simulated sex, in a Hollywood film, but they seek their respective partners’ green light before they’re willing to go ahead.

Before we get to that point, however, Mr. LaBute has fun blowing up the actors’ vacuity and egotism, including Karen’s pseudo-involvement in social causes and her preoccupation with commercial branding; it doesn’t take long before you wonder how she and the intelligent Bev can have a meaningful relationship. But the main target of Mr. LaBute’s satire is Steve, a vanity freak obsessed with his age, which he will go to any lengths to insist is 48 rather than 50, and whose ignorance of basic facts is so enormous that it makes his superstardom seen totally unreal; surely, the celebrity media would have torn him to pieces by now. When proven wrong about anything his stock respose is the old “we agree to disagree” ploy. If he disagrees with a Wikipedia article, he says the site can’t be trusted. This is a guy who uses “C and A” as his abbreviation for what he thinks is “cause and affect,” who fears it might be insensitive to insult the Nazis, and who insists that Belgium isn’t part of Europe. When, challenged, he looks it up on his IPhone, then crows triumphantly because he finds that Belgium is part of the European Union, which he assumes is some offshoot of Europe, not the continent itself. Satire needs more substantial targets than this pushover if it’s going to make a point.

Steve’s persistent opponent is Bev, the only one present with brains and education (from Brown), whose frustration with his appalling obliviousness to facts continues to grow whenever he opens his know-nothing yap. As things heat up, with smartphones being the weapon of choice, Steve and Bev let loose their nastiest invectives, his being laced with rancid homophobic slurs. Eventually, a decision must be made about the sex scene, the phones get put aside as the acrid adversaries let literal push come to shove as they engage in a full-fledged wrestling match.

Mr. LaBute’s dialogue is often point blank blunt, and the scene where the actors and their partners discuss with straight faces just what sexual activities they’re willing to condone and which are no-no’s may cause your face to redden, but there’s no denying the yocks it produces. This being a farce, extreme physical activity has a crucial place. One example is the wrestling match; another is a dance routine combining cheerleading and gymnastic moves that Missy, who played one of the “possessed” girls, performs from her high school production of THE CRUCIBLE. She says Arthur Miller sued. Peter Pucci is credited with the purposely idiotic choreography, which I assume also includes the wrestling moves. Again, anything goes here for the sake of a laugh.

The Lortel’s auditorium is only slightly raked so, sitting in row G, I had to keep moving my position to see around the huge head in front of me. What I saw, when I could, was Derek Lane’s attractively designed patio of a movie star’s fancy home high over Hollywood, whose distant lights can be viewed upstage in the distance. A second story over the patio suggests a place for unseen action to take place near the play’s end. Sarah J. Holden’s costumes are reasonable facsimiles of the casual duds well-heeled movie people hang out in, while David Weiner’s lighting and Rob Milburn and Michael Bodeen’s sound design provide appropriate visual and auditory ambience.

Fred Weller (whose own Wikipedia article says he’s 48) is a slim actor with chiseled features and an equally chiseled torso (revealed during his wrestling bout), so he’s physically plausible as someone with an action movie franchise; he gives Steve the appropriate clueless cockiness but he delivers his lines in a monotonously whiny delivery that fails to reflect what you’d expect a Tom Cruise-like movie star to sound like. Even Vin Diesel would be more acceptable.

Elizabeth Reaser, who took over the role of Karen when real movie star Heather Graham left early in the rehearsal process, has some amusing moments, but she goes over-broad too often, which can’t always be excused on the grounds of Karen's being tipsy. She has a really big screaming scene at one point, but if less had been more previously, more would have been more here.

As Missy, Steve’s tall, slender bride, Gia Crovatin gets all the mileage possible out of playing a wannabe actress who can’t resist stuffing her hungry face with shrimp thingies when her husband isn’t looking. More Steve’s accessory than his wife, she makes the moment when her worm turns memorable, even though this development in the way Missy is written, thematically satisfying as it is, seems forced.

Most authentic is Callie Thorne as Bev, who gives the least exaggerated and most grounded performance. Judging by the all the talk about Bev as an athlete, I expected a more physically imposing performer than Ms. Thorne, who’s considerably shorter than Mr. Weller. Nevertheless, she has the kind of confidence and aggressive attitude Bev needs, and you soon accept her without reservations.