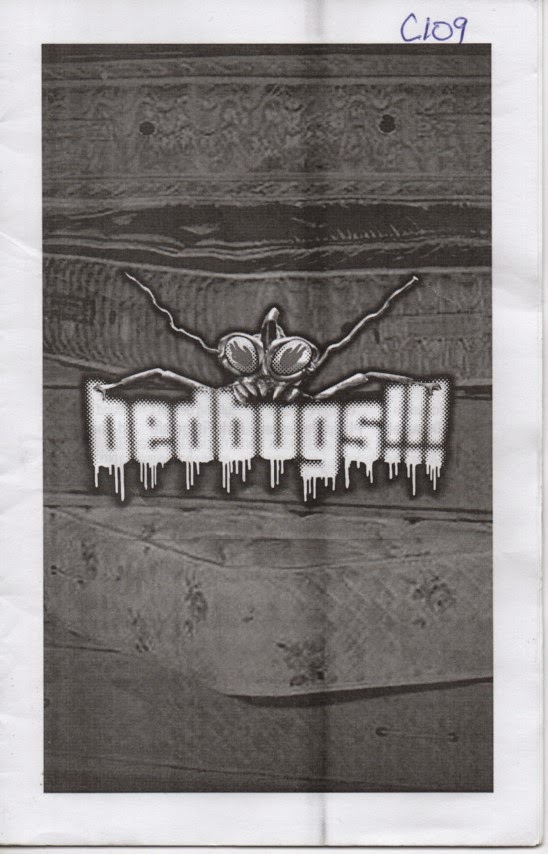 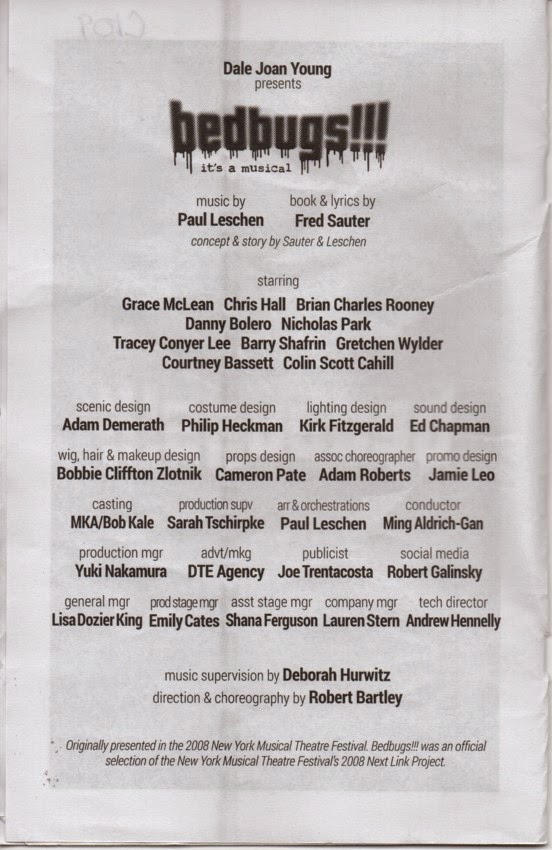 If you’re itching for a good bite on your rock musical butt you couldn’t do better than to flit on over to the ArcLight Theatre on W. 71st Street, where BEDBUGS!!! THE MUSICAL will be happy to oblige you. Highly praised during the 2008 New York Musical Theatre Festival, BEDBUGS!!!, like those pesky pests that inspired it, hasn’t been easy to get rid of, and now it’s back in a regular Off-Broadway production that includes several sensational performers with nuclear-powered voices who’ve been with it all along.

BEDBUGS!!!  is in the tradition of those nutty, campy, exaggerated, and high-energy Off-Broadway shows that arrive every year, and mostly vanish soon after. It may not be as funny and its music not as tuneful as classics of the genre, like THE ROCKY HORROR SHOW and LITTLE SHOP OF HORRORS, but its creative inspiration, which includes an array of costumes designed by Philip Heckman that range from glamorously glitzy to captivatingly clever, goes a long way toward scratching that itch.

Conceived by composer Paul Leschen and book writer/lyricist Fred Sauter, BEDBUGS!!! is performed on a scruffy set designed by Adam Demerath, who has filled it with discarded old mattresses, garbage bags, and other detritus, with a hot four-piece band, led by Ming Aldrich-Gan, stuffed into an elevated corner up left. A filthy mattress, which can open like double doors, stands up center, and, at stage left, the off kilter frame for a TV screen is placed on high. A reporter named Belinda Bedford (Tracy Conyer Lee) periodically sticks her face in it to update us on news regarding New York City’s bedbug infestation. All is flashily lighted by Kirk Fitzgerald.

﻿
﻿﻿
The show begins with a flashback to 1989 when Young Carly (Grace McLean) is watching a Johnny Carson show on which French-Canadian singing star Dionne Salon (Brian Charles Rooney) is the guest. At the same time, though, Carly’s mother (Gretchen Wylder), seeing that the bed bugs (two words, according to Google) she thought were gone are not, trips and dies, leaving Carly with an indelible hatred for Salon. Flash forward to the present when dowdy grown-up Carly (Ms. McLean) is a rogue scientist trying, with the help of her gay brother, Burt (Nicholas Park), to discover a pesticide powerful enough to eliminate the city’s overwhelming bed  bug problem, even though this means using a radical combination of chemicals. What seems at first her success turns out to be a frightening failure, as she’s actually succeeded in creating a mutant breed of insects who take the form of humanoid creatures led by a tall, charismatic dude with glam-rock attitude named Cimex (Chris Hall). He and his ravenous battalions of buggy buddies begin munching the citizenry and, unless a new spray can be invented, it looks like the Big Apple’s residents will be reduced to trail mix. Participating in this catastrophe is the Celine Dion avatar, Dionne Salon, who has an addiction to eating cheese, and whose shady, unfaithful husband-manager, Dexter Diabolique (Danny Bolero), seeking a comeback, is planning a concert for her at Madison Square Garden, even in the midst of the bed bug crisis. And deepening the dilemma is Cimex’s seduction of Carly, who transforms from bespectacled nerd into the flame-tressed, glam-goddess Queen of the Bed Bugs. Will humanity survive? Will Carly find happiness as an insect bride? Will Salon give her concert? Will she overcome her cheese habit? Will Carly conquer her hatred of Salon? And what about poor Burt, who may have a solution to the bugs but has been partly eaten by one of them?

Despite the show’s pertinent pointers, like its emphasis on eco-friendly themes (there’s a marvelous number, “Silent Spring,” sung by Carly and featuring an oversized version of the Rachel Carson book of that title, with an actor’s face protruding from its pages), the show seems much more concerned with having fun with human edibles than educational edification. Its score is filled with 80s-style tunes, many of them requiring the kinds of powerful voices we associate with rock stars of the period, but Celine Dion-type power ballads also get their stage time, if only to be ruthlessly parodied. The lead performers all have the extreme vocal chops needed to rock their routines; the ensemble, each of whom sings, dances, and plays multiple roles, is exceptionally well rounded.
﻿﻿﻿

Mr. Sauter’s book and lyrics are as silly as these things usually are—which is part of the fun—even though there are a number of places where the humor groans with effort. A memorably cringe-worthy example is when a Hasidic Jew (Danny Bolero) sings:


Vontzes, vontzes everywhere.
I can’t bear.
They start at Tsipkilah’s feet,
Climb through the hole in the sheet,
And bite my putz!

The several plot strands, one of them dealing with Burt and his boyfriend, Mason (Barry Shafrin), all come together smoothly enough, however, and despite the cheekiness of the performances and concept, the show never winks at itself too obviously. Robert Bartley’s direction and choreography make the small venue bounce with vitality. He gets awesome mileage from his leads, starting with the huge-voiced Ms. McLean who nails both Carly’s goofiness and, after she bonds with Cimex, her sex appeal. Mr. Hall’s slinky Cimex struts his stuff in a fantastic black and gold costume, part football uniform/part samurai warrior, with a bug headdress replete with golden antennae. Just as memorable is the exceptional drag queen performance of Brian Charles Rooney as the glamorous, determinedly well-meaning Salon; speaking with a comically overripe French-Canadian dialect and singing with a high-pitched voice that hits every challenging note, Mr. Rooney makes an unforgettable Celine mockup. In the less flamboyant role of Burt, Nicholas Park does a solid job, while, among the many excellent ensemble members, Gretchen Wylder’s comic presence stands out in her multiple roles as Carly’s mom, a bug who chats with Cimex by “clicking,” and a Brooklyn diner lady, among others.


As expected, the most reiterated line in this somewhat overlong two hour, 20 minute show is “Sleep tight. Don’t let the bed bugs bite.” I have a feeling, though, that many fans will be bitten but want to return.  “Once bitten, twice shy,” the saying goes. Maybe not for BEDBUGS!!!
Posted by Samuel L. Leiter at 1:23 PM