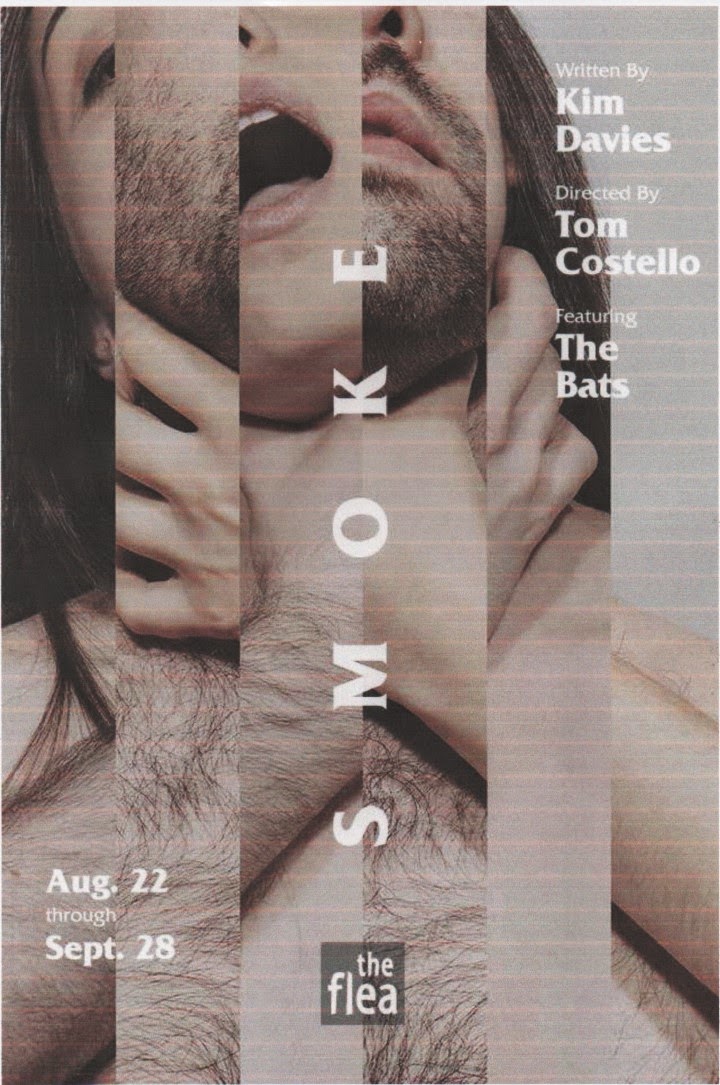 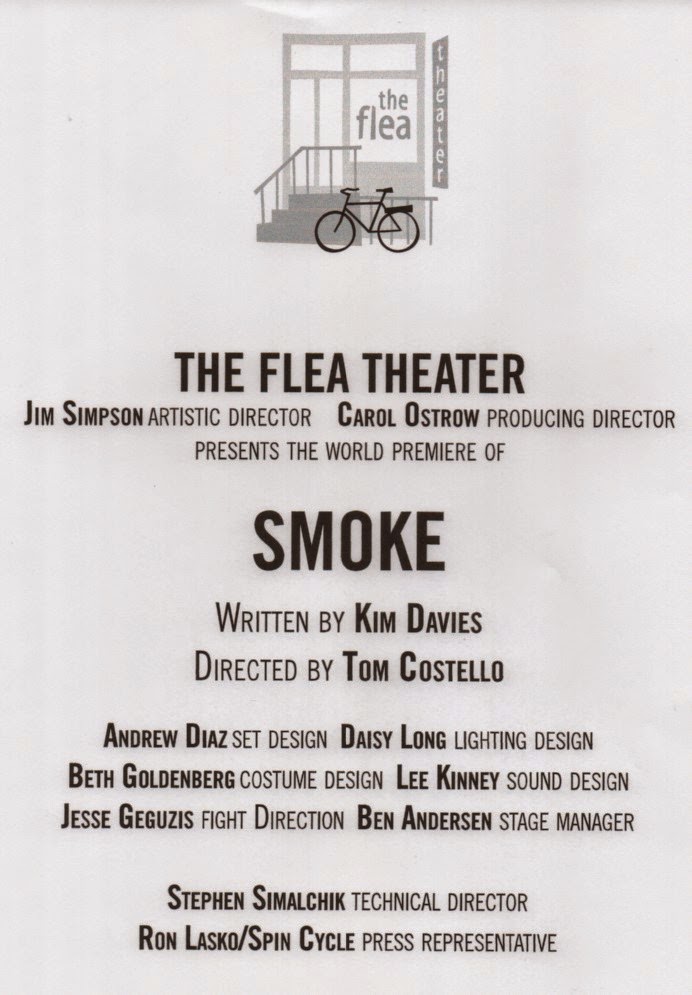 Earlier this week I reviewed a show called BASTARDS OF STRINDBERG, a program of four one-acts commissioned by the Scandinavian American Theatre Company (SATC) to find new ways of thinking about August Strindberg’s groundbreaking 1888 play, MISS JULIE. Most of these efforts were disappointing, and I wrote that being commissioned to write a play as a contemporary response to a classic was extremely difficult because the best new plays usually are born out of the artist’s need to express him or herself exclusive of restrictions. Ironically, when watching a new play last night in the tiny basement at the Flea, I was delighted to discover that the playwright, Kim Davies (who has an MFA in playwriting from Brooklyn College), had written just the kind of play the SATC had been seeking; at 90 minutes, it would have been too long for their program, but it’s far and away superior to anything they’re providing. I was further surprised to find that, while some critics mentioned VENUS IN FUR as an analogue, none of the several reviews I looked at afterward (including the one in the New York Times) mentioned any connection between SMOKE and MISS JULIE; I’d be amazed, though, if someone else hasn’t pointed it out somewhere. To top it off, my theatre companion, a retired theatre professor, director, and playwright, argued that I was wrong, suggesting that even if SMOKE was indeed based on MISS JULIE, it was probably unconscious on Ms. Davies’s part.

There are, of course, major differences between MISS JULIE and SMOKE, which is why this new play, despite its possible source, is a sizzlingly original creation, like Tom Stoppard’s HAMLET spinoff, ROSENCRANTZ AND GUILDENSTERN, or any other famous stage work taking its cue from a classic predecessor (Anouilh’s ANTIGONE, or the musical WEST SIDE STORY, for example). Still, there’s no avoiding the parallels: here are a few of the more obvious examples. Both plays take place in a kitchen during an offstage party (Midsummer Night’s Eve in MISS JULIE, a Harlem BDSM party in SMOKE). There are only two characters in SMOKE, a young woman named Julie, and a slightly older man named John, while in MISS JULIE there are three, Julie, Jean, and Kristin.  However, a third character, John’s girlfriend, is present via her cellphone texts and calls. Her name: Kristen. Jean has a menial position working for Julie’s father, a famous artist, just as Jean is a valet in the household of Julie’s powerful father, the Count. Like MISS JULIE, SMOKE explores the sexual power struggle between the upper-class Julie and the lower-class John, and includes moments of sadomasochistic wordplay and byplay (although taken to sharply different degrees in each). In MISS JULIE, Jean suggests that he and Julie run off to start an enterprise in Switzerland; in SMOKE, the proposed destination is Detroit. In both MISS JULIE and SMOKE, the characters have sex, offstage in the former, on in the latter. Still, as per various modern stagings of MISS JULIE (including two plays in BASTARDS OF STRINDBERG as well as last year’s South African version, MIES JULIE), the sex in SMOKE is on a kitchen table. MISS JULIE makes much of Jean’s razor, which in SMOKE becomes a pair of knives, one big, one small. Miss Julie exits with the razor in an ambiguous conclusion that many believe will lead to her suicide; the script of SMOKE ends without mentioning a knife, but in the production Julie takes up the folding knife, which earlier has been used in a dangerous sexual act, holding it in a way designed to make us contemplate her next step.
﻿In SMOKE John (Stephen Stout), 31, is hanging out in the kitchen to smoke, which isn’t allowed at the otherwise freewheeling party. Julie (Madeleine Bundy), a 20-year-old college student, enters, asking for a cigarette. She’s spotted John at the party, recognizing him as her father’s assistant, and knows he’ll be in this room. He’s a downtown type, a would-be artist (who’s worked mainly as a barista) with a five-o’clock shadow, side hair trimmed close with a shock that falls over his forehead, black jacket, black shirt, black boots, and black droopy-assed jeans with skinny legs; a long chain dangles in a loop at his side. Julie’s wearing a flared, black schoolgirl-like miniskirt, thick-soled boot-shoes, and black knee-high socks. (The spot-on costumes are by Beth Goldenberg.) ﻿
Soon enough, as the exposition unrolls, we begin to see Jean’s initially dominant position as the older hipster begin to blur as Julie’s at first seemingly submissive girlishness peels away to reveal a craftily manipulative creature seeking to use her position as the daughter of John’s employer—to whom John professes loyalty while also putting him down—to her advantage. There’s lots of talk about this or that being “gross” or “creepy,” and it’s not always easy to tell when the characters’ occasionally extreme behavior is real and when it’s “playing,” as they put it, since the premise of the party is people choosing partners to make “scenes.” Mirroring such offstage scenes are those of John and Julie engaging in acts of dominance, submission, and sadomasochism. There’s also talk of the need for permission in these activities, as people won't always be as nice in such situations as those at this party. Julie, whom John thinks is a “sub” (submissive), says she’s interested in being treated roughly, while John, who claims he’s a “het dom,” likes to dish it out, although he knows just how far he can go. For him, with his cache of knives large and small, his ability to inflict pain in sensual encounters is a skill he enjoys practicing with willing victims; she, for her part, needs to prod and poke at his defenses so she can eventually put him down as the “lapdog” to her father she accuses him of being. ﻿


The authentic-sounding, often profane, dialogue sounds perfectly real in the mouths of these gifted young actors, who invest their roles with the kind of naturalistic believability of which Strindberg could only have dreamed. The tiny venue has been arranged by set designer Andrew Diaz so that the kitchen is placed at what is usually the stage right end of the elongated space, with the audience seated around it on two sides. The actors are so close that any false notes would be immediately apparent, yet you rarely feel they’re acting or aware of your presence, so intent are they on carrying out their actions, which include moments of violence and intimacy; female flesh is shown, but there’s no actual nudity. Of course, certain restrictions apply; in real life the characters would have gone further in their physical behavior than director Tom Costello, who has done a masterful job in helping hone these performances, allows. This is a play, after all.


Whatever debt it may owe to MISS JULIE, SMOKE is a fresh and novel look at sexual power politics in its most elemental form. Made even more vital by its intensely convincing performances, it’s one of the best things currently available on the Off Broadway scene. If the SATC wants to see how MISS JULIE can speak to today’s audiences with a contemporary point of view, they need only take a trip downtown to White Street. This show is s-m-m-mokin!