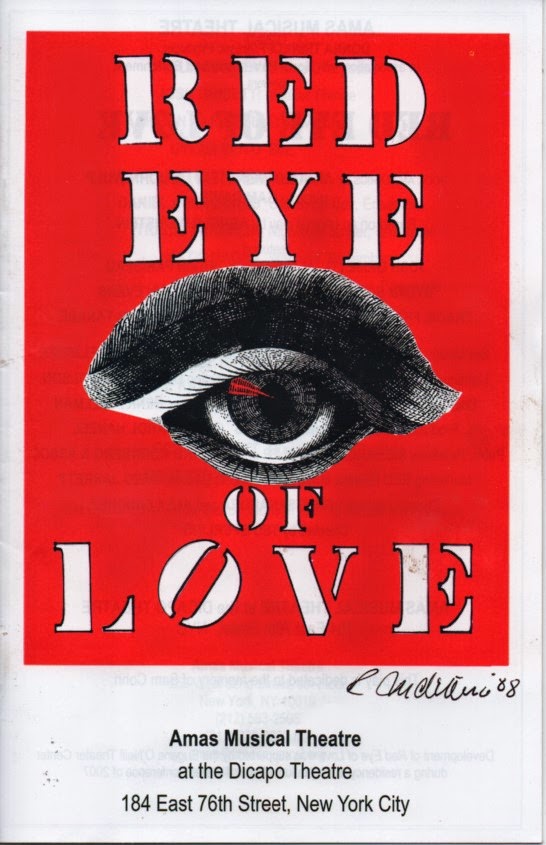 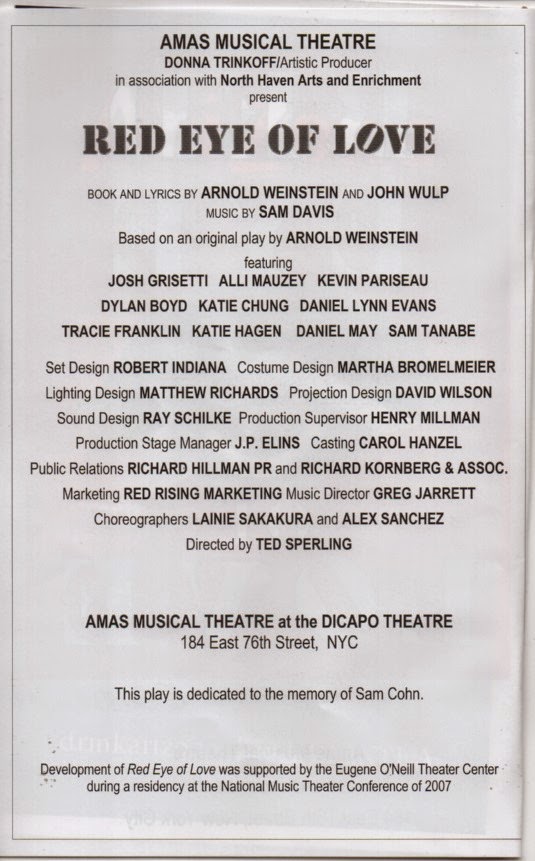 You’ve got to hand it to John Wulp, co-librettist and co-lyricist, with the late Arnold Weinstein, of RED EYE OF LOVE, the new musical produced by the Amas Musical Theatre at the DiCapo Opera Theatre on E. 76th Street. The distinguished 86-year-old theatre artist, whose illustrious credits include staging the Tony-winning 1977 Broadway revival of DRACULA, starring Frank Langella, won an OBIE for his direction of Weinstein’s original version of RED EYE OF LOVE, when it was a nonmusical absurdist play presented by the Living Theatre in 1961. That was in the days shortly before the experimentally adventurous Living Theatre, led by Judith Malina and Julian Beck, became one the world’s most provocative avant-garde theatre troupes of the 1960s. Offbeat as RED EYE OF LOVE may have been in 1961, its essential sweetness and optimism, even in a world of capitalist oppression, seems galaxies away, aesthetically, from such Living Theatre landmarks as PARADISE NOW.
Following DRACULA’s success Wulp and Weinstein sought for years to convert RED EYE OF LOVE into a musical comedy; after running into various hurdles and being stashed in a drawer, the project was revived in 2007, two years after Weinstein’s death. But no producer was interested until composer Jan Warner’s score was scrapped and a new one by Sam Davis introduced; its mission was to make the show “lighter and funnier than in previous incarnations,” according to an article in the New York Times. “They wanted me to write something more tuneful, more musical comedy,” said Mr. Davis. Then, after a North Haven, Me., staging in the summer of 2013, by Todd Sperling (whose THE OTHER JOSH COHEN was so memorable in 2012), the show was noticed by Donna Trinkoff of Amas, and now has opened Off Broadway, over 30 years since Mr. Wulp and Mr. Weinstein began developing its musical incarnation.
It would be the greatest pleasure to report that, after all the decades, dreams, and determination involved that a hidden treasure has been unearthed and brought back to surprisingly gleaming life. While there are definitely delights to savor in the enterprise, as reflected in the preview audience’s generally warm response, the overall result seems dated, precious, and ponderously whimsical (whimsically ponderous also works).
RED EYE OF LOVE—which Mr. Sperling has staged in the manner of a vaudeville show—bears various superficial signs of Eugene Ionesco’s 1950s theatre of the absurd comedies with few, if any, of the master's compelling insights into the absurdity of the human condition. Its hero, Wilmer Flange (Josh Grisetti), is a Berenger-like everyman who falls in love with the cute, blond sales clerk Selma Chargesse (Alli Mauzey) when he seeks employment at the Martinas Meat Emporium, a meat department store owned by O.O. Martinas (Kevin Pariseau), Selma’s illiterate employer;  Martinas's oft-mentioned inability to read or write, by the way, is neither laugh worthy nor significant, which can also be said of his persistent use of “becount” for “because.”

The show charts the on-off love affair and marriage of Wilmer and Selma, complicated by her marriage to the meat millionaire, whose successful business is represented by a store that evolves over the years from a 13-story building into one 49 stories tall, selling every kind of meat imaginable. Martinas is the kind of capitalist that political protest theatre often lampoons by dressing him in dollar signs; still, the authors also give him what might pass as a likable side. Selma, who says it's her “duty to marry for money,” must choose who to love, the aggressive businessman or the goofily charming idealist seeking the “key” to the universe, which will range from the movies to dolls.
Beginning in the New York of the 1920s, the action moves forward through the Depression (when Wilmer’s status as “a bum” becomes comic fodder), and then into World War II, peacetime and a succession of other wars. The songs take flabby swings at a world that can create a Depression and find war a profitable endeavor. An extensive amount of time is taken up with Wilmer unsuccessfully trying to invent a doll that will suffer all the human symptoms of disease and death, a preoccupation that forces his wife and son to leave him, at least temporarily. The ongoing rivalry between O.O. and Wilmer for Selma’s love is resolved in a happy ending that satisfies all concerned. Despite its potentially pertinent subtext, however, RED EYE OF LOVE seems far more interested in providing a quirky entertainment than making any original political statements.
As we follow the lives of the three principals, all sorts of peripheral material is introduced as excuses for tepidly amusing songs and dances. Clichéd as it is, one of the better numbers focuses on our obsession with movies, for example, performed in outrageously melodramatic silent movie terms, down to a mustachioed villain tying a heroine to the railroad tracks from which she’s rescued by the hero in the nick of time. Another extensive sequence offers a Ziegfeld Follies-type review  centered on Martinas’s meat business, with dancing cows and strip-teasing lamb chops, among other meaty images. So much prop meat moves off and on it almost seems that someone got a bargain on all those beef carcasses left over from ROCKY.  I even wondered why the show was called RED EYE OF LOVE (the title of one of the songs) when RIB EYE OF LOVE would have been a bit more to the point.
Fantasy dominates reality in the narrative—like the characters’ idealistic decision near the end to live among the Navajo—and many lines border on being non sequiturs. The characters' motivations are all schematic rather than real, the would-be comical effect of their behavior and dialogue taking precedence over psychological truth. On the other hand, sexual byplay is practically nonexistent, limited to an offhand reference to Martinas’s impotence and a ham-fisted sequence in which Selma declares that she and Martinas don't hit it off “in any manner or form,” a phrase repeated several times to hit the audience over the head with its nuance.

Mr. Davis has supplied the musical comedy score for which he was asked; some of it is forgettable (“Two Fat Cats”), some of it is serviceable (the title song), and some verges on the enjoyable  (“I’m Going to the Movies”), but since there’s no orchestra per se—just a pair of straw hat-wearing musicians (Greg Jarrett and Roberto Sinha) sitting opposite each other at upstage twin grand pianos—the songs don’t get the full treatment a richer orchestration could provide. Aside from the songs that strain to exploit meat metaphors (“Does your heart go bump / at the sight of rump”), most of the lyrics are blandly unimaginative. Lainie Sakakura and Alex Sanchez have provided a substantial amount of choreography, including a well-executed tap dance routine by a trio of dancers in silly Guernsey cow costumes, and a 1940s boogie woogie pastiche; much of it is appealing, but a good deal looks wearily familiar.
Visually, the show benefits from clever and attractive costumes by Martha Bromelmeier, who captures the essence of the changing years without being too pedantic about it (although I wondered why a sequence from World War II has Wilmer in an authentic period GI helmet and his three companions in helmets from World War I). The big design name involved is that of painter Robert Indiana, the 85-year-old op art star (his LOVE emblem with its leaning O forms part of the program cover he also designed). Mr. Indiana, who happens to be a neighbor of Mr. Wulp’s, contributed the upstage panel (originally seen in a 1998 version in Maine), which lists various types of meat in a simple crisscross pattern that serves as a background for the noteworthy (and abundant) projections of David Wilson. Matthew Richards’s lighting does a fine job of sculpturing the essentially bare stage (there are star patterns on the floor), which uses minimalist set pieces to move the episodic proceedings along.
At two hours, with one intermission, RED EYE OF LOVE is under-flavored and overcooked. To paraphrase what Spencer Tracy said of Katharine Hepburn in PAT AND MIKE, “There’s too much meat on her and what there is ain’t ‘cherce.’”