75. SCENES FROM A MARRIAGE 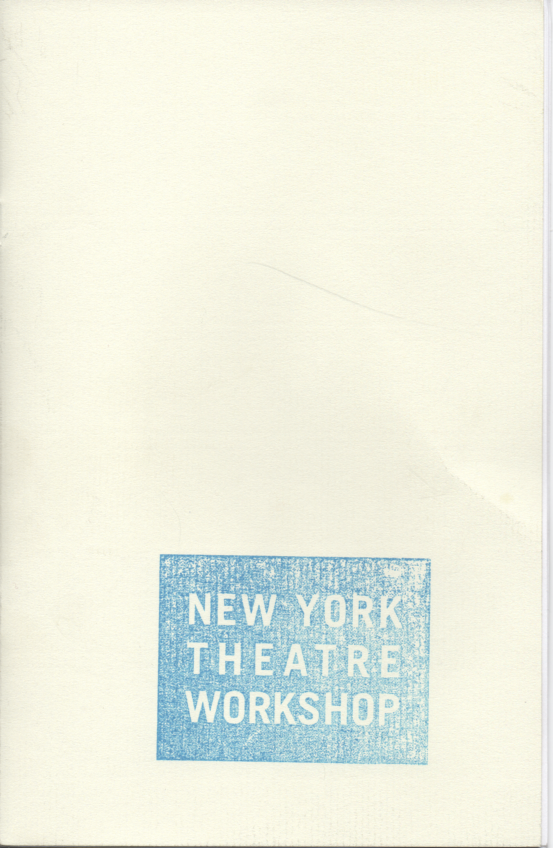 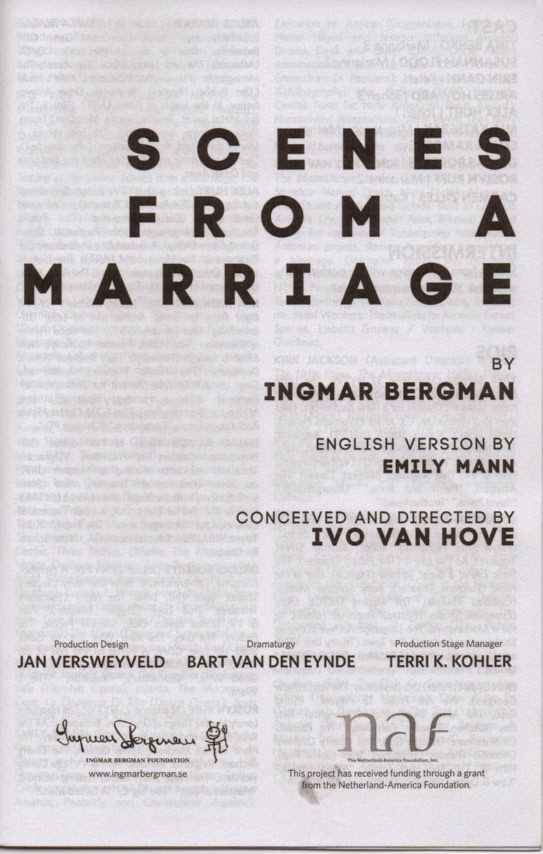 Like the unseen, artsy Belgian film director in Neil LaBute’s THE MONEY SHOT, at the Lucille Lortel Theatre, the artsy Belgian stage director Ivo Van Hove likes to break boundaries. One can question the necessity of Van Hove’s boundary breaking, but it can’t be denied that he’s gained a considerable name for himself in New York with the series of works he’s staged at the New York Theatre Workshop. Since 2000, when he staged Susan Sontag’s ALICE IN BED there, he’s put his personal stamp on such NYTW revivals as THE LITTLE FOXES, THE MISANTHROPE, A STREETCAR NAMED DESIRE, and HEDDA GABLER. His newest venture at this East Village venue is SCENES FROM A MARRIAGE, in an English version by Emily Mann based on the 1973 Swedish TV miniseries of that title, written and directed by Ingmar Bergman and starring Erland Josephson and Liv Ullman. A considerably trimmed down version of the miniseries appeared not long afterward as an internationally successful movie.

I realize some critics (including Ben Brantley of the New York Times) love this production (as did a couple of theatregoers I overheard when the show ended), and that the fence-sitters and more seriously disappointed reviewers veer toward the minority. Just this morning, a respected playwright and theatre journalist posted on Facebook that “everyone should try to see SCENES FROM A MARRIAGE. It’s not only fascinating in itself, for anyone who makes theatre it will kickstart your imagination.” I, on the other hand, couldn’t shake the feeling that the emperor was naked.

SCENES FROM A MARRIAGE is an essentially straightforward drama of marital dysfunction, made memorable in its original screen form by the luminosity and insight of Josephson and Ullman, as directed by Bergman with intensely scrutinizing close-ups. The NYTW production, however, does everything possible to draw attention to itself and away from its source. And without actors of even half the brilliance of the originals to make the blood flow in its veins, the script comes off as hackneyed and overblown.

Most of the critical fuss concerns the unique way that Mr. Van Hove, who originally directed the work with his Toneelgroep Amsterdam company in the Netherlands, has staged the play. At considerable expense, he’s emptied out the interior of the NYTW so that a theatre-in-the-round configuration of three or four rows of red, plush seats can be installed. In the large open space thus created, designer Jan Versweyveld has placed an elaborate tripartite setting that cuts the audience seating into three discrete units, each facing one of three rooms. These functional rather than decorative rooms are equipped with doors and windows. The windows face into a sort of triangular general interior space into which the actors can enter, and where they can be seen, gathering props, turning music on, or dealing with their feelings. (The effect is something like a recording studio.) The only furnishings in the outside rooms are a table each in two scenes and a bed in a third. The tables force the actors to use them as chairs, beds, and whatnot.

The first of the play’s two acts contains three principal scenes that chart the progress of Johan and Marianne's marriage over a period of nearly 20 years. Each scene is acted in its room simultaneously with those in the other rooms. This is because there are three sets of actors playing Johan and Marianne; they’re labeled with numbers, as in Johan 1 and Marianne 1, but essentially they’re young Johan and Marianne (early 30s?), older Johan and Marianne (late 30s?), and oldest (late 40s?) Johan and Marianne. No couple in any way resembles the other, and one, in fact, is racially mixed. As per the logistics mentioned in the next paragraph, the actors repeat their scenes three times during the evening. You can sometimes see the actors in other rooms through the windows, and hear their voices or slamming doors. Actors from other scenes can also be seen in the interior room, and, occasionally, there’s a counterpoint effect between what you glean from another scene while you’re watching the one before you. One actress actually takes a moment to acknowledge something going on elsewhere.

The ambience is purely contemporary America, although certain music choices, such as  “Bridge over Troubled Water,” take us back a few years. No costumer is credited for the actors' clothes, which are mostly contemporary grunge, with around 80% of the company wearing jeans.

Spectators are given a colored wristband before entering the theatre, the color designating in which area they’ll be seated. My blue wristband meant my friend and I were seated in the room where the first scene was to be performed, and we were able to watch the three scenes in chronological succession. The other options would be to see scene two followed by scenes three and one, or to see scene three followed by scenes one and two. At the end of each scene, an actor comes out and casually asks the audience to move through the curtains to its right to enter the next room.

A 30-minute intermission follows while the set is rearranged for the second act. The evening was a lovely one, so standing outside and chatting was perfectly fine. Given the small lobby, I pity the audience that has to find shelter on inclement nights. The production, by the way, intermission included, takes three hours and 15 minutes, which was 15 minutes shorter than I’d expected. This was one of the event’s more positive takeaways.

The script is about Johan and Marianne, a successful couple—he a professor, she a lawyer. Former radicals, they now appear the perfect middle-class couple. When first seen (with Alex Hurt as Johan and Susannah Flood as Marianne), they’ve been married for ten years, and a visiting couple, Peter (Erin Gann) and Katrina (Carmen Zilles) are envious of what seems their ideal relationship. Peter and Katrina, however, reveal their own marital problems and they have a major brouhaha. Afterward, Marianne tells Johan that she’s pregnant, and we see cracks forming in their relationship when they discuss what to do about the baby.

In scene two, Johan (Dallas Roberts) and Marianne (Roslyn Ruff) bicker over the “little boxes” of domestic life they feel obliged to fill, and Marianne expresses her growing discontent with their married life, despite its seeming placidity. The idea of infidelity is raised and passed over. Johan interacts at work with Eva (Emma Ramos), a pretty colleague; is there something going on? Marianne counsels Mrs. Jacobi (Mia Katigbak), a woman who wants a divorce from her husband of 20 years. Her reason: “There’s no love in our marriage.” Marianne senses a connection to Mrs. Jacobi’s dilemma as a woman who has everything but still seeks “something unattainable she calls love.” Soon, Marianne and Johan reflect on the cooling of their sex lives.

The crux of scene three is Johan’s (Arliss Howard) revelation that he’s in love with a 23-year-old student and is going to leave Marianne (Tina Benko) and their children. What’s wrong with his marriage? For starters, its ordinariness, responsibilities, nagging, pleasing others, holiday planning, etc. Marriage itself seems the culprit, as it does throughout the play, not anything egregious one or the other partners does prior to Johan’s affair. This may be why SCENES FROM A MARRIAGE was considered so controversial in Sweden: after its release the number of divorces leaped, with many pointing their fingers at the miniseries and movie.

When the audience returns for the second act, the rooms have vanished, replaced by a large, round space with a few select properties. If actors need to sit or lie down, they do so on the floor. For much of this act, especially the earlier sections, all three Mariannes and Johans appear at the same time. They sometimes speak chorally, sometimes in overlapping sections, and sometimes one after the other, but the same lines are spoken by all. They do so in varying configurations around the space, occasionally mixing with actors who are not their designated partners. This is all carefully orchestrated, of course, as is their wide-ranging movement. Much of what they say is indecipherable because of the jumble of voices but enough comes through to allow their feelings to be expressed, especially during an extended argument that evolves from shouting to physical tussling (shades of THE MONEY SHOT again!).

The plot follows Johan and Marianne through the dissolution of their marriage to their later marriages and affairs, showing them as inextricably bound through it all as if they still were married.  For most of the latter part of the play, only the oldest Johan and Marianne are present, and there are brief incursions by other characters, notably Marianne’s mom (Ms. Katigbak again), whom Marianne questions about her own marriage to Marianne’s late father. Once the multiple couples disappear, the performance settles into conventional narrative terms again, and, apart from the minimalist environment, is indistinguishable from any other drama of the type.

My objections to Mr. Van Hove’s deconstruction of SCENES FROM A MARRIAGE are many, but I’ll keep them brief. For one thing, very few of the actors--several of them well known locally--seem able to make the writing real, no matter how naturalistic they seek to be, and the many emotional transitions come off as forced and hollow. The scenes of kissing and fondling are completely unconvincing, as if the actors aren’t very comfortable with their partners. Every kiss, for example, seems to be done with lips together. Several actors, such as Susannah Flood and Carmen Zilles (so good last year in ADORATION OF THE OLD WOMAN), are acceptable, and Ms. Katigbak makes a good impression in her two supporting roles; her chief drawback is that she barely differentiates one character from the other. My friend, an established director and professor of directing, who couldn’t bring himself to stay for act two, thought Stella Adler would have shredded most of the other actors to pieces.

Mr. Van Hove’s conception, with its multiple casting and multiple sets, succeeds in suggesting the universality of marital dysfunction, but so, actually, does Bergman’s original, with its traditional approach. The subject of SCENES FROM A MARRIAGE is basic human territory, but the presence of great actors under an even greater director make it exceptionally powerful, meaningful, and moving. In this theatrical version, with its look-at-me gimmickry and unpersuasive actors, the text simply can’t be prevented from sounding banal.
Posted by Samuel L. Leiter at 1:55 PM