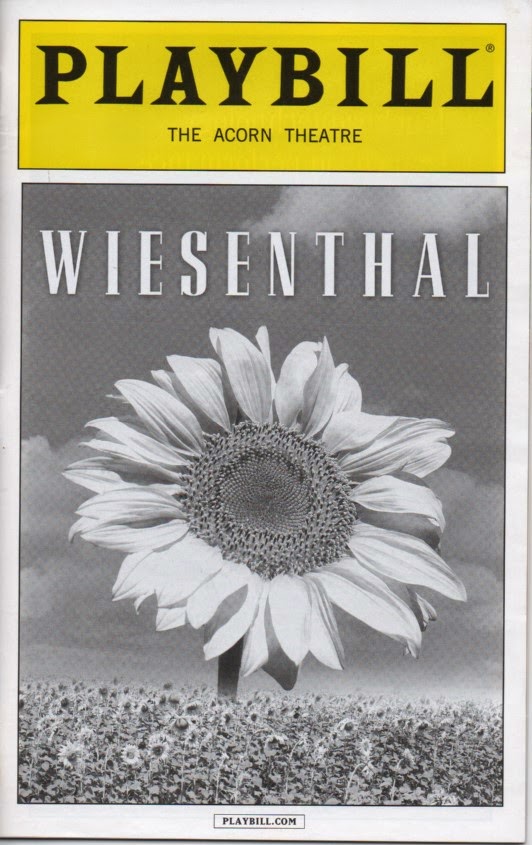 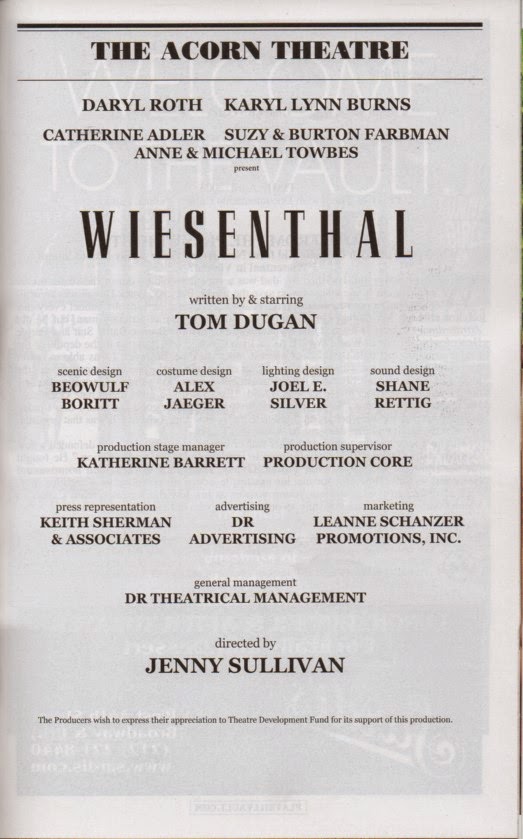 The Holocaust is no laughing matter, but that doesn’t stop famed Nazi hunter Simon Wiesenthal—or rather, Tom Dugan, who’s playing him (in his New York debut) and who wrote the script—from beginning WIESENTHAL, a 90-minute, one-man biodrama, with an innocuous joke, nor from introducing humor at various points in the narrative. As he points out midway through, “When I’m confronted with opposition in my life—and that happens a lot—humor can be used as a bridge. People who are laughing together sometimes forget to kill each other.”

The play is informative and, often, engrossing, but—regardless of its powerful subject—only occasionally moving. Wiesenthal even warns the audience early on that “It is not my goal today to produce tears,” for which they can “go home and watch soap operas.” His purpose, he insists, “is to produce knowledge,” and on that score he delivers.
Mr. Dugan, a 53-year-old Irish Catholic actor-playwright from New Jersey, was inspired to write and perform WIESENTHAL by memories of his father, who was in a unit that liberated a concentration camp in 1945. Despite what he witnessed there, he told his son that the reason he didn’t hate all Germans was because he refused to judge people by the group to which they belonged, but rather on the way they behaved as individuals. This philosophy was shared by Wiesenthal, a Jew born in what was then the Ukraine who had suffered enormously from Nazi policies, yet who insisted that even the Nazi SS had a few good apples mixed in with all the wormy ones.

The dramatic premise is that the 93-year-old Wiesenthal is closing up his office at the Jewish Documentation Center in Vienna in 2003 (two years before his death), having finally agreed to his wife’s ministrations that he retire. The audience, treated as his last group of visitors, listens as the frail but still spirited old man offers a panoramic overview of his life, taking us through “Simon Wiesenthal’s greatest hits,” as he calls them, from the prewar years through the horrors of the Holocaust to the postwar years when he became the leading pursuer of Nazi war criminals, eventually participating in the capture of 1,100 such persons (far more than that, however, were never found).
Wiesenthal, tottering on shaky legs, moves around his book-lined office, designed with realistic detail by Beowulf Boritt, dressed in a tweed jacket, maroon sweater, and shirt and tie (Alex Jaeger is the costumer). Under the direction of Jenny Sullivan, he trowels on the charm with his strong (but largely unconvincing) German accent, giving the impression of an avuncular professor doing his best to make the horrible history lesson he is offering as palatable as possible.  Every now and then he asks for an audience reaction, and at one point even shares the seedless grapes he’s eating with people in the front row. His shrugs, his smiles, the twinkle in his eyes, and his many expressive hand gestures, coupled with his frequent references to his wife, Cyla, and daughter, Paulinka, present an image not so much of the “Jewish James Bond” but of a stereotypical Jewish grandpa. One of several running jokes, for example, is his need not to forget his wife’s request to bring home milk. It’s presumably this ordinariness that makes his extraordinary life so distinctive.
Much of the play’s first half concerns Wiesenthal’s early life, his relationship with the woman he married, the arrest and deportation of the Jews (including his beloved mother), and his concentration camp experiences. Wiesenthal introduces the ethical values that drove his pursuits, talking about the Holocaust not as a Jewish tragedy, but a human one; about the need to confront genocide wherever it occurs; about the difference between justice and revenge; about why he continued to live in Austria, despite its anti-Semitism; about his mission to convince the “doubting boys of Europe” regarding the reality of the Holocaust, and so on.
The play fails to mention it, of course, but Wiesenthal, for all his outstanding achievements, is known for having contradicted himself in many places and--being something of a self-promoter--for unnecessarily embellishing an already remarkable story. He mentions, for example, having been sent to a dozen camps but fact-checking historians say it was only five. There’s no mention of his failure to identify Kurt Waldheim’s Nazi past when he was originally being vetted as Secretary General of the UN, and many—including the then head of the Mossad—claim he greatly exaggerated his role in the capture of Adolf Eichmann, the Nazi mastermind responsible for millions of deaths. The play briefly alludes to the latter controversy, with Wiesenthal—despite publishing a book in German whose title means I CHASED EICHMANN— dismissing it, admitting that while he didn’t actually capture the “bookkeeper,” as he calls Eichmann, he introduced a new word into the lexicon of Nazi hunting, “Wiesenthal.” It was, in fact, this book that brought him the celebrity that allowed him to do much of the work for which he became famous.
To give the play a sense of reality and prevent it from seeming too much of a lecture (which happens, nonetheless), Wiesenthal interrupts his presentation to use the phone as he tries to contact a reporter regarding Alois Brunner, a Nazi he’s hunting, or to call a hotel employee in Damascus, Syria, to learn if Brunner is hiding out there.  For additional theatrical interest, his stories incorporate dramatic lighting changes (designed by Joel E. Silver), offstage sound effects (by Shane Rettig), and vocal and behavioral alterations as the actor briefly impersonates various characters, male and female.
While Wiesenthal’s Holocaust experiences are gripping, they’re not greatly different from the many that have been written about or dramatized on stage and screen over the years. It’s his Nazi hunting exploits that make him significant, and—had they been the main focus—might have made this play even sharper. Those exploits have, of course, been turned into a number of narrative and documentary films, some excellent, which Wiesenthal references, not forgetting to throw in a few Hollywood anecdotes. Nevertheless, when Mr. Dugan does get to this material, with stories about such beasts as Eichmann, Franz Stangle, Franz Murer, and Karl Silberbauer, the policeman who arrested Anne Frank, the narrative sometimes stumbles, finding it difficult to sustain interest during what’s little more than a string of anecdotes (and then I caught . . . ).
WIESENTHAL is a worthy project, with a noble educational objective. The writing and performance don’t always rise to the level necessary to make it truly noteworthy, but the importance of what it says requires that we welcome its presence.