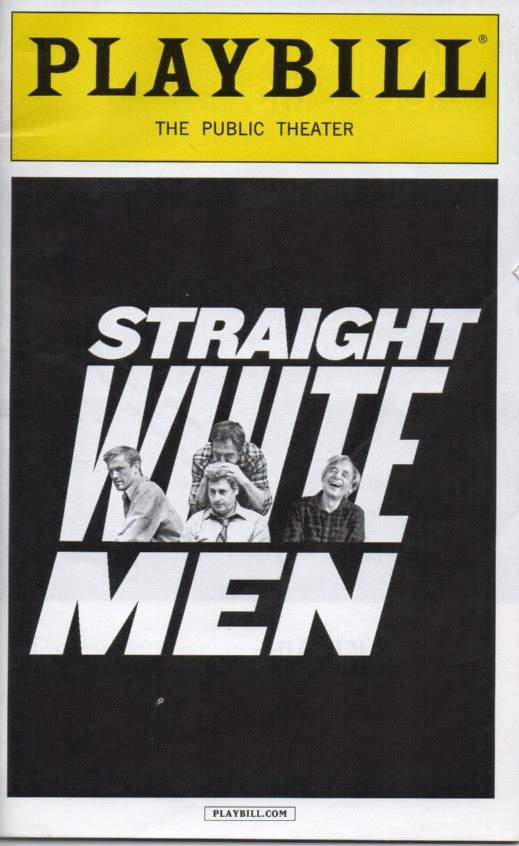 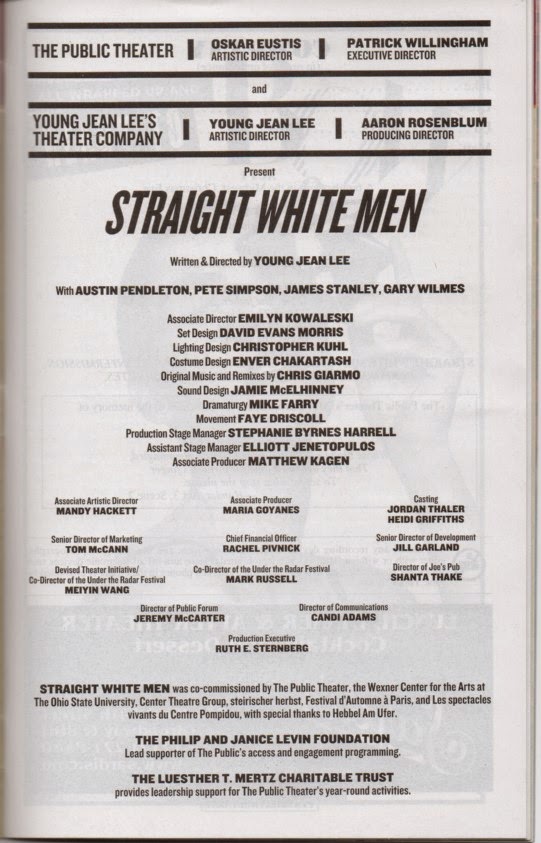 The eye-catching title of Young Jean Lee’s new play, STRAIGHT WHITE MEN, is something of a red herring. Perhaps a more accurate title would be SOME STRAIGHT WHITE MEN or FOUR STRAIGHT WHITE MEN. Lee’s title—assuming it relates only to Americans of that description—suggests something universal about a human subset that the very well-performed play fails fully to either exemplify or clarify. A multi-award winning Korean-born playwright of considerable stature who’s best known for her nonlinear experimental plays, which often examine issues of identity politics, Lee turns in this play—now at the Public Theater’s Martinson Hall—for the first time to a linear, naturalistic form.
The action unfolds over three acts, covering 90 intermissionless minutes, in the generic family room of a white, liberal Midwestern home (designed by David Evans Morris and brightly lit by Christopher Kuhl) belonging to a retired engineer and widower named Ed (Austin Pendleton). Ed’s brood of three sons, all in their forties, has gathered to celebrate the Christmas holidays. The oldest is Matt (James Stanley), highly educated and strongly committed to social justice (he once got a school theatre teacher fired for producing an all-white Oklahoma!), but adrift, unable to make use of his knowledge and abilities. He’s been living with his accommodating dad as a sort of substitute mom, handling various household chores. Matt holds down a temp position doing menial work (Xeroxing) with a socially responsible organization, but is burdened by a large student loan debt.
The visitors are the middle son, Jake (Gary Wilmes), a banker, recently divorced, with kids of his own, and the youngest, Drew (Pete Simpson), an unmarried college teacher (one four-hour class a week) who writes novels on political themes, and whose positive experience in therapy leads him to recommend it for Matt. Aside from brief scenes where the dialogue engages with personal and social issues of white privilege, you’d never guess from their incessant adolescent hijinks, profanity (they especially love to throw the word “dick” around), and crude horseplay that they were (apart from the rudderless Matt) accomplished professionals. Ed, for his part, is a quietly bemused spectator to their childish behavior, not always getting it, but never raising his voice. He serves as the essentially neutral moderator when the play’s central issue comes into focus.
This happens when, as the family is eating Chinese take-out, Matt begins weeping (if only briefly); the play now begins to deepen as Drew reaches out to uncover the source of Matt’s unhappiness, drawing the others into the conversation and, if only sporadically, igniting something of a discussion drama. Matt, for all his alleged brilliance (none of it ever demonstrated), can’t explain his sadness or his loser’s inability to use his gifts to move on in life. The causes of his unassertiveness are hard to grasp, and even he can’t articulate them, making his unanswered dilemma the play’s biggest question. To help give Matt the confidence he seems to lack, Ed stages a mock interview, as if hiring Matt for a job, but Matt handles it poorly, even after trying to emulate Jake’s performance when he demonstrates the proper way to do it. In the end, Ed’s forced to make a difficult, if belated decision, about his son.
The play has lots of vivid activity and offstage music (some by Chris Giarmo, with sound design by Jamie McElhinney) as the brothers roughhouse with each other; everyone dances wildly (movement is by Faye Driscoll) at one point to loudly thumping music (with Matt doing comically robotic movements), but this doesn’t make up for an essentially inert dramatic structure. STRAIGHT WHITE MEN wants to confront issues of white privilege (Drew and Jake even play a version of Monopoly their late mother cleverly adapted into a game called Privilege), but, a few moments aside (some of it related to that board game), little of it goes very deep nor does it demonstrate much that might not also be associated with nonwhite, non-straight, non-male behavior, although the male component is probably the most incisive. Generalizations are fun, but what do they really prove?
Ms. Lee also serves as her own director, which works well enough for the acted scenes. However, this is 2014 and it’s time for directors to recognize that if you’re going to stage a naturalistic play whose action must be interrupted for scene changes, you should either use a curtain, dim your lights to near darkness, or choreograph your actors to cover the shifts. Bringing a handful of black-garbed stagehands, headsets and battery packs in place, onto a barely dimmed stage won’t do if you wish to sustain any sense of illusion.
Austin Pendleton gives a convincingly paternal performance as the easygoing Ed; seeing him amidst the fairly strapping actors playing his sons reminds us that tiny acorns can produce mighty oaks. Each of the sons is believable, but the sum total of their performances still doesn’t enlighten this straight white man about his own condition. Perhaps, in Young Jean Lee’s eyes, that likely is itself part of the problem.
STRAIGHTWHITE MEN