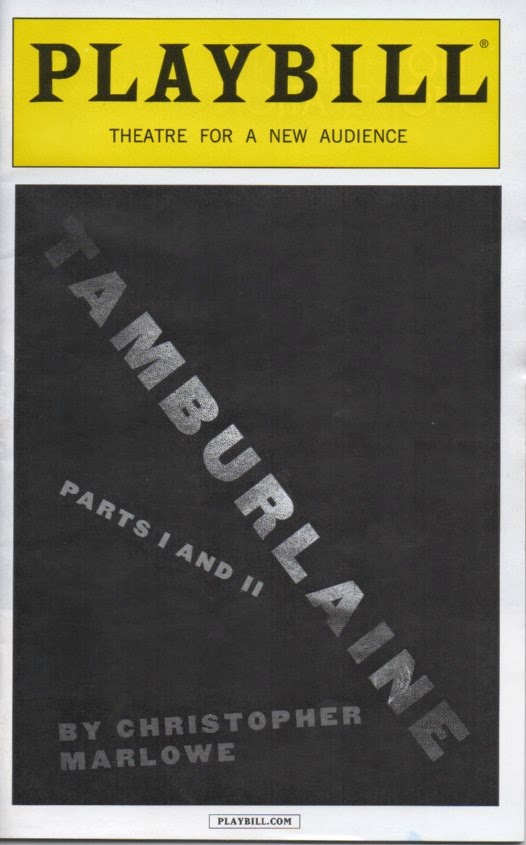 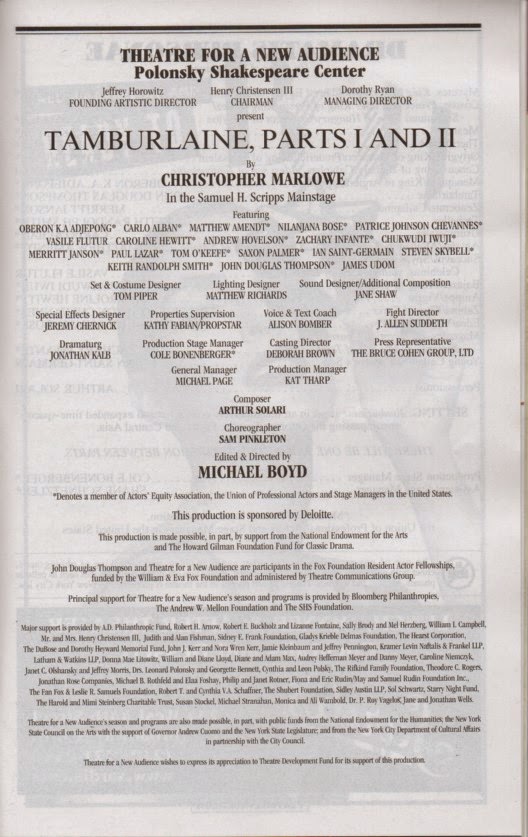 As those members of the audience at the Polonsky Shakespeare Center still remaining at the conclusion of TAMBURLAINE, now being revived by Theatre for a New Audience, rose to warmly applaud the production, my friend and I wondered: Were they truly appreciative of a masterful production? Were they acknowledging the fortitude of a company that had just completed an exhausting schlep through over three hours of rhetorical bombast? Or were they expressing their mutual joy in having survived the event intact without being hung, shot, trampled, mutilated, raped, stabbed, or otherwise brought to an untimely end?


For make no mistake, this production is a blood and thunderfest in which a man slices open his arm to display his valor, a woman seeking death paints her throat with a potion she claims will make her invulnerable as a ruse to have herself slain, a father angry at his son’s lack of warlike fervor thinks nothing of killing him, someone else’s tongue is sliced off and tossed about, an emperor and empress commit suicide by bashing their brains out against their cage, a cohort of Muslim virgins is hung, men are forced to pull a conqueror’s carriage with bits in their mouths as he snaps a whip above them, and so on.


As directed by Michael Boyd, the extremity of much of the play’s onstage viciousness is symbolically indicated by having someone—often a sweet young lad (Ian Saint-Germain)—take a bucket of blood and pour it all over the victims, or use a brush to paint their white garments bright crimson. So much red stuff (144 gallons a week) is spilled, splashed, and splattered, in fact, that a half-hour break between the two parts of the production (stretching the evening out to three and a half hours) is required so that the stage crew can wash the stains away (Lady Macbeths need not apply). I can’t even imagine the laundry bill.
And, to be honest, TAMBURLAINE, which premiered in 1587, isn’t really a masterpiece, although it’s extremely important historically for how effectively it demonstrated the theatrical power of blank verse. Its author, Christopher Marlowe, murdered in a barroom at 29, was famous for his “mighty line,” and, to capitalize on the play’s enormous success, wrote a sequel, here conjoined to the original in a two-part event that, were it not “edited” by Mr. Boyd, would last well over five hours.
TAMBURLAINE was given its first New York production, in 1956, by Canada’s visiting Stratford Festival, in a reportedly rousing production staged by Sir Tyrone Guthrie, adapted from Parts I and II by Guthrie and English actor Donald Wolfit. It starred England’s Anthony Quayle (with an as yet unknown William Shatner as Usumcasane), and took a relatively fleeting two and a half hours to complete. For a modern audience, that should be enough, since the play is little more than the expression of the eponymous megalomaniacal conqueror’s insatiable desire for worldwide power, no matter how many millions must be slain in the process. (17 million people are believed to have died in his campaigns, five percent of the world’s population at the time.) Apart from his love for Zenocrate (Merritt Janson), the beautiful daughter of the Soldan of Egypt (Paul Lazar) he takes captive, Tamburlaine (John Douglas Thompson), “the scourge of God and terror of the world”—known to history as Timur or Tamurlane (1336-1405)—has no redeeming features, unless you consider military prowess and incomprehensible ruthlessness to be admirable qualities.
When he’s not busy extolling Zenocrates’s loveliness, Tamburlaine—who reputedly began life as a Scythian shepherd—is wreaking havoc all over Asia (from the Middle East to India), Europe, and Africa. Much of the action takes place in Persia (Iran) and Syria, and places we now hear of daily in the news are among the episodic play’s locales. TAMBURLAINE seems little more than an incessant series of confrontations with one local king after another; when such potentates refuse to surrender, he unleashes his humongous armies to turn the resistant kingdom or city into dust, ashes, and blood. Tamburlaine, swollen by hubris, ultimately places himself above the gods; he defies Mahomet (Mohammed), and even burns the Qur’an (the Alcoran in the play), but is soon struck down by illness—admittedly, too lenient a punishment—and dies. A recent London production at the Barbican created a controversy about censorship when the book burning and references to the prophet were both modified and cut. The material remains intact here.

Before Tamburlaine goes to hell, or wherever such creatures go, we first must endure his never-ending boasting and the various ways in which his ambitions bring out the cowardice and treachery, as well as the heroism, in others. With all of this presented in high-sounding rhetorical speeches, many of them quite lengthy, monotonous, and lacking in the human insight we get with Shakespeare, and with characters who are little more than verbal fountains, we look instead to see how well the director and his company can bring their artistic inspiration to Marlowe’s violent dramaturgy.


Mr. Boyd has opted for a minimalist approach, forgoing Guthrie’s colorful pageantry. The Polonsky uses an Elizabethan-like structure in which a large thrust stage is surrounded on three sides by galleries, with one audience section in the pit area facing the front of the stage. Tom Piper’s stage proper is bare, with a grated trap at center into which, when opened, bodies can tumble or characters emerge. At the rear of the stage is a multilevel wall, at whose uppermost position is a musicians’ room where composer-percussionist Arthur Solari can be seen accompanying the action with drums, gongs, and xylophone.  Below him is a curtain of heavy plastic strips, the kind you pass through to the refrigerated sections in large food stores. Thanks to Matthew Richards’s lighting, we view actions taking place there through the translucent strips, which, when their time comes, get a healthy dose of blood showered on them.
Mr. Piper, who also designed the costumes, uses a dullish black and white palette, with touches of red, making this a rather unattractive presentation. The costumes are in the increasingly clichéd “timeless” mode, combining modern elements with pieces redolent of differing eras, with tunics, long coats, robes, and pajama-like costumes thrown together helter skelter, usually with a long scarf, in a quickly forgettable mix.
﻿﻿

Although many actors play multiple roles, little effort is made to distinguish their different parts with costuming; with so many characters, most of them branded with unfamiliar and exotic names—Mycetes, Cosroe, Usumcasane, Meander, Theridamus, Ortygius, Menaphon, Callapine, Techelles, yada yada—the audience needs a program to know who the players are. Barely changing their appearances is just another pretentious gimmick (among many in the production) serving no other purpose but confusion. One of several egregious examples is when, after Mycetes, King of Persia, played as a witless fool, is killed, the same actor (Mr. Lazar) appears as the King of Egypt in a similar costume and wearing the same royal crown, a choice made even more puzzling by having the latter also played with foolish mannerisms. Later, when Mr. Lazar plays Almeda, the jailer, his costume is slightly changed but his manner and the crown he eventually is given are much the same as in his earlier roles.
The choice of having Zenocrates, as soon as she is dead, don a ragged coat (soon discarded) to signal that she’s now playing the male role of Callapine is another head scratcher. It’s not so much the cross-gender casting, which is, of course, becoming an increasingly faddish option, but the lack of clarity engendered by having an actress suddenly become a man without any notable change in costume or attitude. Just because the actress is established as a male character through a brief staging transition doesn’t mean we have to believe or accept it. Seeing her play the role in white pajamas and with bare feet, with only a crown to denote her rank, and in no way adopting masculine vocal or physical attributes, doesn’t help us suspend our disbelief. In a more familiar play, like HAMLET, such business might be used to make a point about gender because we recognize the characters and can ponder the surprising manipulation from the expected. In a rarely produced play, like TAMBURLAINE, where the characters are all new to us, it’s just one more example of the intrusive artsy-fartsyism that often threatens to overtake classical theatre revivals.
The company is vigorous and well-spoken but no one is exceptional. As Tamburlaine, a role in which even the highly regarded Anthony Quayle failed to bowl the critics over nearly 60 years ago (too much shouting, wrote Brooks Atkinson in the New York Times), John Douglas Thompson gives a hearty, lung-challenging performance, demonstrating physical agility and personal presence. If there were any substantial scenery present, it would have been lustily chewed. The part, however, remains an abstraction, and, for all his determined efforts, Mr. Thompson, a gifted actor who recently starred as Louis Armstrong in a one-man play, never quite makes this terrifying tyrant human.
Guthrie’s production used 19 actors, one less than Mr. Boyd’s. Judging from its cast list, there was no doubling, and some of the minor roles mentioned (a Prologue, Persian messenger, a Basso) don’t appear in the current revival. The scene in which a king uses several virgins to seek mercy from Tamburlaine was dropped, and it’s not difficult to imagine other scenes that were deemed unnecessary. I don’t know if Mr. Boyd looked at the Guthrie-Wolfit script, but it would be interesting to do so to see just how much more might have been trimmed from the current adaptation. Where, one wonders, was the sharp edge of Tamburlaine’s sword when it was most sorely needed?