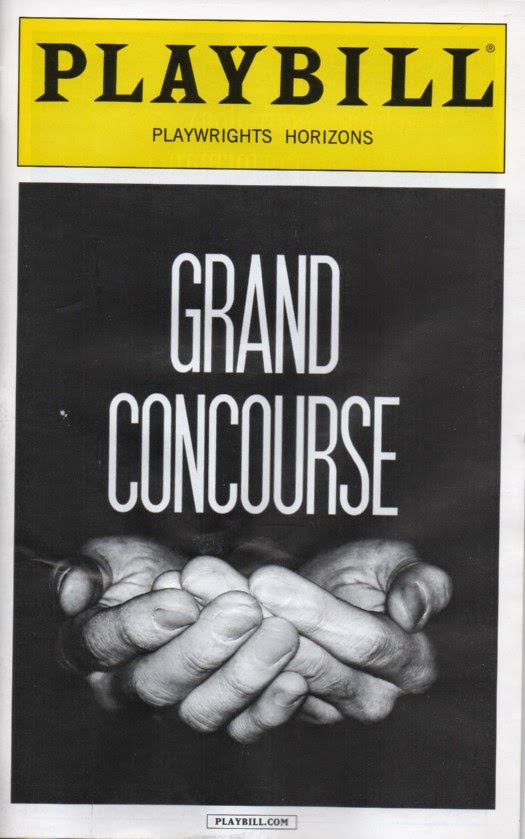 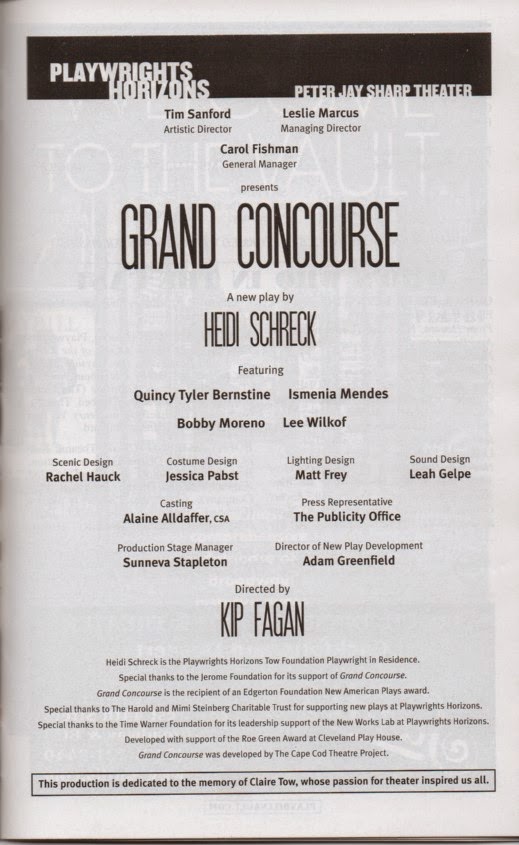 A lot of celebrities grew up in the vicinity of that famous Bronx thoroughfare, the Grand Concourse, among them Penny and Gary Marshall, Ralph Lauren, Calvin Klein. Robert Klein, and Rob Reiner. Heidi Schreck’s eponymous new dramedy, however, has nothing to do with them, nor with the history of that once fabled, now largely faded, street. Instead it deals with people living at the other end of the social spectrum, the drunks and derelicts requiring the services of a neighborhood church’s soup kitchen, one presided over for the past 15 years by a nun named Shelley (Quincy Tyler Bernstine). 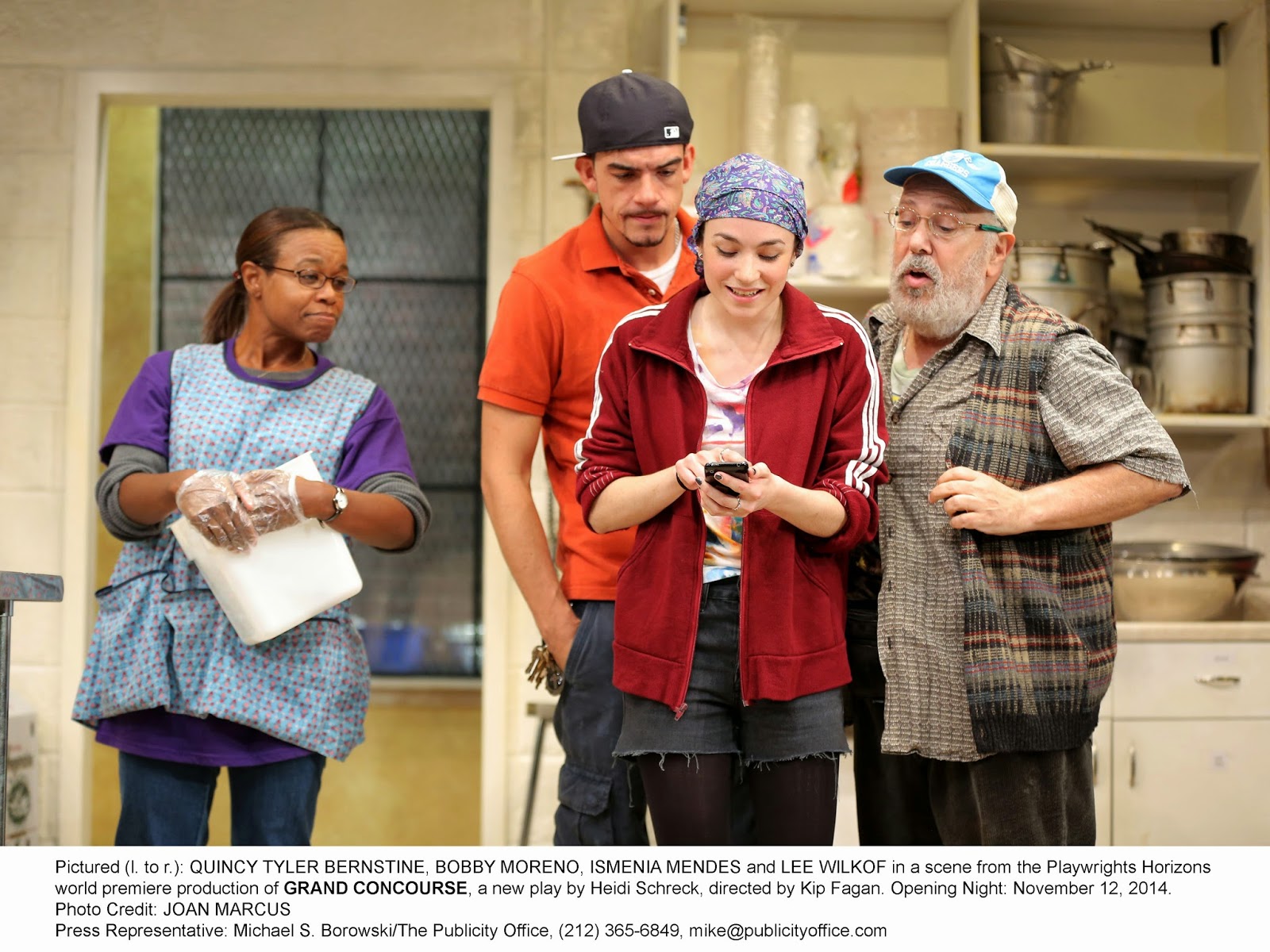 Actually, except for one character, the play is really about those who run the kitchen and not those who receive its largesse. In addition to Shelley there are Oscar (Bobby Moreno), a 30ish security guard/maintenance man from the Dominican Republic; Frog (Lee Wilkof), a dumpy, scraggly, but articulate old drunk and druggie, whose psychological issues have put him on the dole; and Emma (Ismenia Mendes), a pretty, middle-class, 19-year-old, her hair streaked in blue and red, who turns up at the kitchen to “give back,” as she says, by doing volunteer work.
GRAND CONCOURSE puts its slow-simmering, lightly seasoned plot on a back burner while it concentrates on exploring its richly flavored characters and their interactions. Ms. Schreck’s dialogue, written in unpunctuated verse, has the tang of reality while being juicily theatrical. Despite the overall serious tone, it includes a satisfactory sprinkling of funny remarks.
Shelley, 39, is a down-to-earth, basketball playing, do-gooder having considerable difficulty in sustaining faith in an increasingly stultifying vocation that tests her patience and powers of forgiveness; she uses a microwave to time her prayers, hoping to get beyond a minute and up to five. A modern nun, she eschews a habit in favor of mufti. (The costumes are by Jessica Pabst.) When she’s pushed to emotional extremes, the vulgarity of the streets flows trippingly off her tongue. Ms. Bernstine, a fixture on New York stages over the past few years, sinks her teeth deeply into this hearty role. As Shelley fulfills the requirements of her pressure cooker job, Ms. Bernstine beautifully balances the character’s piety with the everyday ordinariness of a secular employee. In the climactic scene at the play’s close, her struggle in responding to behavior she considers evil, even if not malicious, makes us ponder just how strained the quality of mercy can be.
Oscar is an energetically animated, sweetly charming street dude, his various baseball caps worn backwards or to one side, his speech delivered in tastily accented Latino tones. A student at City College hoping to move on to better things when he graduates, his relationship with the girl he loves, Lydia, is endangered when the attractive newcomer, Emma, shows an unsettling interest in him. Mr. Moreno, so distinctive in last season’s THE YEAR OF THE ROOSTER, avoids making Oscar a stereotype; the stage tingles with electricity whenever he appears.
Frog, the most overtly unconventional (and exaggerated) character, is a bundle of quirky, even paranoiac, old geezer mannerisms—including a passion for corny jokes—that make him both appealingly odd and potentially worrisome. There are times when the veteran Mr. Wilkof overdoes Frog’s clownishness, but, for all his eccentricities, he’s capable of evoking considerable pathos.
The ladle that stirs Ms. Schreck’s dramatic pot is the psychologically damaged Emma, who presents herself as a college dropout suffering from a fatal disease. Her desperate need for acceptance, combined with a sincere desire to help the less fortunate, lead to impulsive (unexplained but seemingly bipolar) behavior that helps bring the action to a boil. Ms. Mendes, another rising talent, demonstrates considerable ability in making this vulnerable assortment of contradictions worthy of both compassion and rage. The play shows how Frog, Oscar, and Shelley respond to her, and asks us to consider what our own reaction would be. As Frog reminds us, we’re all “angels and assholes.”
GRAND CONCOURSE examines issues of faith, forgiveness, depression, mendacity, and redemption in an episodic succession of 18 scenes covering what seems like at least a year. Each scene begins with a clicking sound as the fluorescent lights pop on. However, director Kip Fagan, who does very well with his actors, might have found a less distracting way of covering the scene shifts; as handled by the actors in dim light as pop music plays (Leah Gelpe did the sound design), they break the illusion in what is otherwise a work of, dare I say it, kitchen sink naturalism.
And I mean naturalism. This is the second production in a row at the Peter Jay Sharp Theatre (upstairs at Playwrights Horizons) set in an industrial strength (so to speak) kitchen. The red and white Madison Avenue restaurant kitchen of MY MANANA COMES is here replaced by Rachel Hauck’s totally credible, white soup kitchen (convincingly lit by Matt Frey). New York’s kitchen suppliers must be rejoicing at having found a regular customer on W. 42nd Street.
The kitchen activity, by the way, includes a lot of slicing and dicing with demonstrably sharp knives. The day I saw the show the New York Times carried a story about the two cuts (one requiring five stitches) sustained by Hugh Jackman slicing lemons onstage during previews of THE RIVER, at the Circle in the Square; it’s hard not to wince every time a potato, carrot, or eggplant in GRAND CONCOURSE is cut into tiny pieces. When a character does get realistically nicked as part of the action, you can bet the stage manager is ready to call EMS just in case.
GRAND CONCOURSE serves up a nourishing theatrical stew, filled with chunks of solid acting. It may take its time to heat up, but isn’t slow cooking the way to go nowadays?