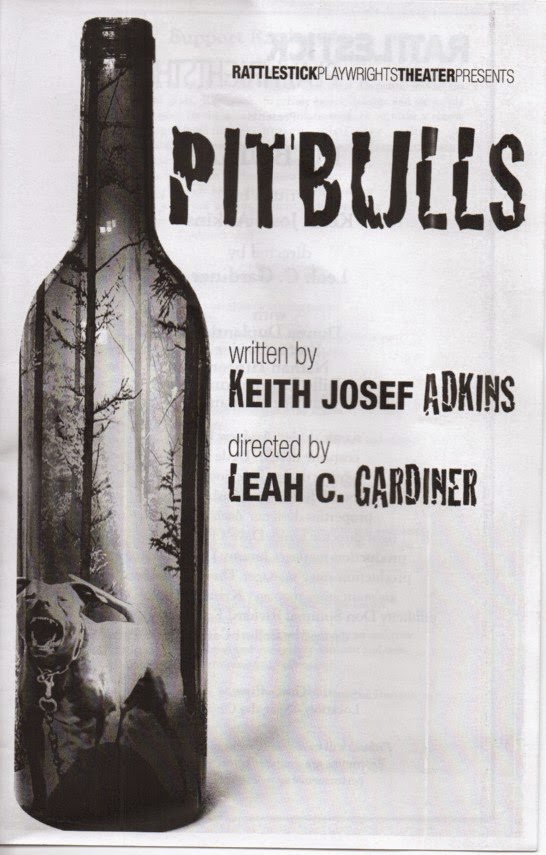 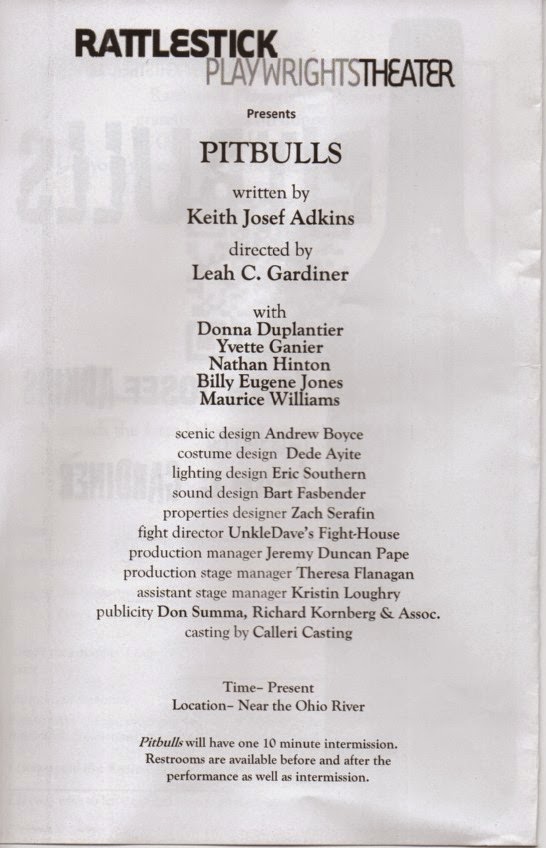 Need some gritty grunge in your playgoing diet?  If so, you can usually depend on the Rattlestick Playwrights Theatre to provide it. Looking back on the past couple of seasons, I can recall feeling the need for a shower after sitting through several of THE HILLTOWN PLAYS, THE LONG SHRIFT, THROUGH THE YELLOW HOUR, A FABLE, and THE FEW, plays usually filled with shiftless, scruffy, swearing characters in rundown settings depicting a world of losers and miscreants. So it was no surprise on entering the theatre to encounter the shabby trailer trash environment Andrew Boyce has put together for PITBULLS, Keith Josef Adkins’s intermittently interesting examination of life in an African American Bible Belt community somewhere in the Appalachian backwoods, near where the Ohio River meets Ohio, Kentucky, and West Virginia.
Pit bull (two words, not one) fighting is not only acceptable around here, but even the town’s mayor and chief law enforcement officer advocate for it with a Fourth of July Pitbull Summit intended to help local breeders make a profit on dog sales, making the place America’s “pitbull capital.”
Although much of the play is about pit bull fighting’s significance to the town, nothing is said about its legality. According to Wikipedia:
In addition to [dog fighting] being a felony in all 50 U.S. states, the federal U.S. Animal Welfare Act makes it unlawful for any person to knowingly sell, buy, possess, train, transport, deliver, or receive any dog for purposes of having the dog participate in an animal fighting venture.
It’s hard not to be puzzled about this in a play where only one character opposes the fighting, and no one ever cites the laws against it; on the other hand, the play doesn’t shy away from iterations about other local infractions, including flag burning.
PITBULLS is a domestic drama portraying five black hillbillies (Hill Jacks, the play calls them), and focusing chiefly on a blowsy, feisty termagant, Mary (Yvette Ganier), whose ideals—she’s the one against pit bull fights and for flag burning—clash with those of everyone around her. Mary and Dipper live in a decrepit trailer, where she inexplicably keeps her washer outdoors and earns her living by making bootleg wine, which Dipper sells at the nearby highway off-ramp. Her libations are also used for various healing purposes, for which some consider her a witch.
Mary is fiercely protective of Dipper (Maurice Williams), her feckless 20ish son, whose name, we learn in one of the play’s brief—but not very credible—infusions of poetic atmosphere, was inspired by Mary’s fascination with the stars and constellations. Her overprotectiveness involves her keeping him away from people and pit bulls, but, bored and lonely, with barely any outlets for “funning,” Dipper’s inclinations aren’t easy to repress.
The local sheriff, Virgil (Billy Eugene Jones), is a swaggering ex-Marine and torch-bearing former lover of Mary, who returned from service (where is unspecified) with a mean streak that makes him potentially dangerous to anyone with whom he disagrees. Virgil is intent on making Mary admit she tried to blow someone up in their truck some years past for having killed her pup (an incident about which she still obsesses), and we have to wait until late in the play to find out what actually happened. Mr. Adkins, whose play seems mainly interested in squeezing as much local color from these folks as he can, doesn’t create much suspense about this or other matters, including the killing of two dogs.

Possibly Dipper’s father, Virgil arrests Dipper, accusing him of blowing the head off a pit (the grisly remains appear in a bowling bag), forcing Mary to choose between Dipper’s going to prison or joining the Marines, which latter possibility Mary—seeing what military service did to Virgil—vehemently opposes. Without revealing the outcome, I can suggest that, from what we’ve seen of Dipper, even if he decided to serve, his chances of actually being accepted, regardless of Virgil’s inside line to recruiters, would be unlikely; the idea of him shooting missiles at the enemy stretches credulity to the breaking point.
Then there’s Wayne (Nathan Hinton), a door-to-door salvationist seeking to become a full-fledged minister. Wayne, however, is an avowed porn-watching sinner, cussing freely and, despite being married to the bible-thumping but equally hypocritical Rhonda (Donna Duplantier), having casual sex with Mary, for whom he serves as a Mr. Fixit. “It’s better to speak your sins,” he declares, “than to hide them.” Mary, for her part, has little but ridicule for Wayne’s piety, or for any religious belief. Wayne’s immediate aim is to gain the mayor’s approval so he can offer the official benediction when the summit is held, thus enhancing his ministerial aspirations. This creates conflict when he hesitates about helping Mary in her attempt to shield Dipper from incarceration.
Mr. Adkins requires that the actors speak in a local dialect that shouldn’t be confused with Southern black speech; it’s hard for me to tell the difference, although my companion, who once lived in Ohio, felt that Ms. Ganier sounded authentic. The language is colorfully ripe and vulgar (the local mountains are referred to as “tittified babies”), the characters are profanely earthy, and, one supposes, are intended to serve as human representatives of the tenacity with which pit bulls never let go.
With much of the action taking place on Independence Day, there’s clearly a link to the characters’ respective needs to establish their own independence from their living conditions. The townspeople, for their part, need the sort of independence they can get by separating themselves from poverty by making money from the summit. To Virgil, Mary’s rejection of pit bulls is a rejection of these needs, which is why he informs her that town can tolerate her flag burning but not a “disregard for pitbulls.”
Despite the play’s clunky storytelling, the actors offer vivid performances, most especially Ms. Ganier, who works hard to make her character’s negativity artistically positive. Leah C. Gardiner’s direction keeps things moving; Mr. Boyce’s set cleverly squeezes several naturalistic locales into the tiny space available; Dede Ayite’s rural costumes look authentic; and Eric Southern’s lighting offers acceptable indoor and outdoor effects.
Mr. Adkins’s play is both nominally and thematically about dogfighting, a subject into which not many may wish to sink their canines. It would, at the least, have to have more red meat than what’s been put on the platter here.