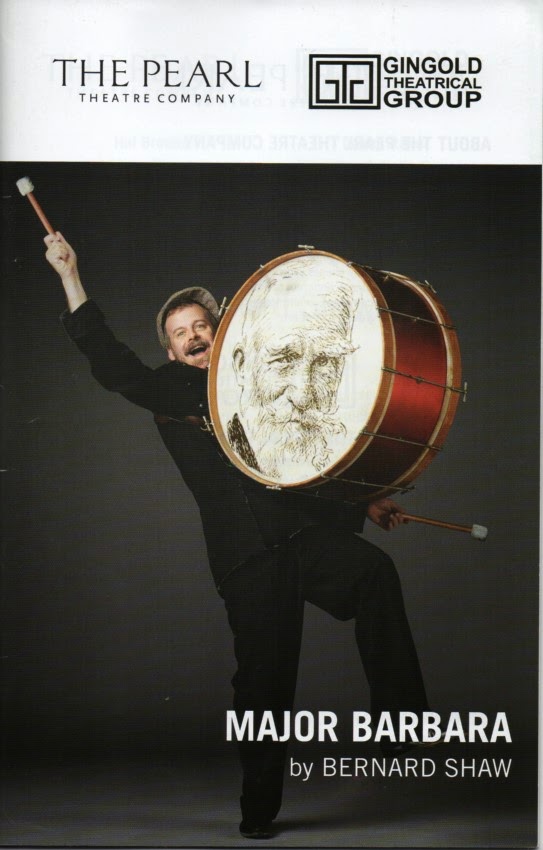 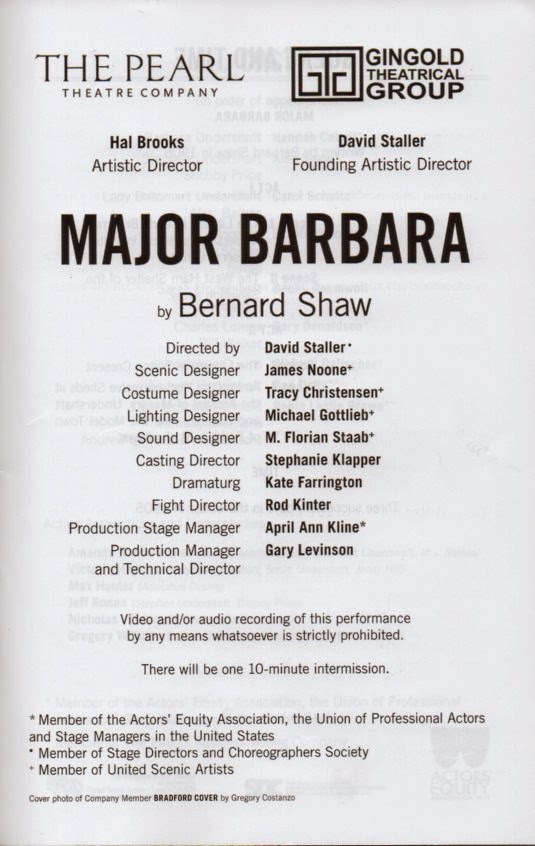 No dramatist can mess with an audience’s moralistic preconceptions with as much sharp-witted, brain-twisting dialogue and colorfully expressive dramatic situations as George Bernard Shaw in his best plays, among which MAJOR BARBARA continues to hold a place of high esteem. A mark of this comedy’s excellence is that while its ideas may no longer be quite as explosive as they were over a century ago, they’re still not only pertinent but have the ability to set your head spinning as they fly at you like machine gun bullets.
﻿

MAJOR BARBARA was first produced in New York in 1915 and was revived in 1928 by the Theatre Guild. Its only other Broadway revival was in 2001, starring Cherry Jones in the title role and with David Warner as Andrew Undershaft. Off Broadway’s Pearl Theatre is now offering a revival that, although troubled by some uncomfortable choices, nevertheless serves as a suitable introduction to this intellectually complex, subtly allegorical play about good and evil, power, religion, charity, idealism, poverty, crime, war, and money.
The three-act play—here divided into two acts of two scenes each—presents three persons around whose ideals the fiery, yet often comically rich, rhetoric glows. Barbara Undershaft (Hannah Cabell) is an idealistic Salvation Army major seeking to save souls through spiritual power; her father, Andrew Undershaft (Dan Daily), is a fabulously wealthy munitions manufacturer who believes that only money, beneficently used, can save mankind; while Adolphus Cusins (Richard Gallagher), a professor of Greek who’s also Barbara’s fiancé, holds that humanistic thinking is necessary to civilization’s progress. Their beliefs are hammered out in a family drama concerning Undershaft’s search for a foundling (such as he himself was) to inherit his profitable factory of death.


Invited back to the bosom of his family by his estranged wife, Lady Britomart (Carol Schultz) so as to provide financial support for his grown children, whom he hasn’t seen in two decades, Undershaft takes a special interest in Barbara, who’s appalled about the source of her father’s wealth.  Each wishes to convert the other to their values. He, believing poverty to be man’s worst crime, agrees to visit the shelter in the West Ham slums where she provides succor for the poor, while she consents to visit his weapons factory.
At the shelter, the Salvation Army leader, Mrs. Baines (Ms. Schultz), rejoices when Undershaft agrees to match the large donation of a whiskey distiller named Bodger in order to save the Army from ruin, but Barbara resigns, unable to accept such tainted money to aid the survival of her sacred cause.  Afterward, during Barbara and her family’s visit to her father’s factory, at Perivale St. Andrews, and to the socialistically utopian village, replete with cultural amenities, that he’s built for his well-fed workers as his way of abolishing pauperism (and, as a result, charity), she and Cusins combine their beliefs with his. To do good, apparently, one must recognize and employ evil. Barbara finds in the well-fed but spiritually malnourished workers a new source of inspiration for her soul-saving aspirations.
The play may be called MAJOR BARBARA, but Undershaft, a stand-in for Shaw, is the most dynamic and interesting character, and it’s ultimately his positions that prevail. He’s given the revival’s best performance by Mr. Daily, who brings both a commanding presence, good humor, and raw power to his arguments. As Barbara, Ms. Cabell, so memorable last season in the one-woman play GROUNDED, speaks with intelligence and authority, but she misses the character’s sweetness and charm. Mr. Gallagher makes an enthusiastic and well-spoken, if not especially charismatic, Cusins. The remaining company members, with a variety of upper- and lower-class British accents ranging from solid to shaky, are acceptable without being memorable.
Mr. Staller’s decision to have many actors double (or triple) their roles may have been necessitated by financial considerations; artistically, the results are questionable. As already noted, Ms. Schultz plays both Lady Britomart and Mrs. Gaines. Alec Shaw, cast as Undershaft’s feckless son Stephen, also plays the impoverished Snobby Price. Bradford Cover is cast in three roles: the butler Morrison, the unemployed Peter Shirley, and Bilton, Undershaft’s foreman. Becky Baumwell plays both Sarah Undershaft, the family’s colorless daughter, and the Salvationist Jenny Hill, while Cary Donaldson handles Sarah’s fiancé Charles Lomax and the ruffian Bill Walker (so distinctive in the movie version as played by Robert Newton).  Despite changes in attitudes and accents, these actors are simply not the chameleons such casting requires.
Even more questionable is the use of the same set for every scene. Shaw’s play is extremely particular about the specifics of each location, yet all we see throughout is the set for the library at Wilton Crescent (misspelled Cresent in the program). Since this is a rather striking design (by James Noone) in black with gold trim, with a staircase at either side joined at the rear by a crossover bridge, seeing it as the shabby shelter without so much as a change of furniture is disconcerting. Simply hanging a sign saying “Salvation” is not enough, nor is the problem solved by hanging two vertical banners upstage saying “Ashamed” for the space to be transformed into what the program says is “Among the High-explosive Sheds at the Arsenal of Messrs. Undershaft and Lazarus, near the Model Town of Perivale St. Andrews.” If budgetary constraints are responsible, it would have been preferable to find some simpler, more suggestive approach that allowed the audience to recognize at once the relationship of the action to its locale. Having an elaborate set for one locale and nothing at all for the others makes no sense, especially when it backs a scene meant to depict dire poverty.
Perhaps as a nod to his casting and design decisions, director David Staller has chosen to emphasize the play’s existence as a work of theatre and not reality. He introduces members of the cast at the beginning in black, the men in slacks and t-shirts, the women in dresses, and has them remove pieces of clothing from the side walls to don their full costumes. As they do so, a scene of Barbara—standing before the library set—speaking to an open air crowd (we, the audience), transpires, with the actors offering comments from the sidelines. Although I see no attribution in the program, these words seem to have been adapted from Shaw’s screenplay for the film. The scene then crossfades into the play’s actual first scene. The actors, again all in theatrical black, reappear at the end just before Undershaft’s tag line to cite other snippets, these being intended as the main characters’ thoughts, but essentially being their most cogent and compactly stated comments: “People may differ about matters of opinion, but how can they differ about right and wrong?” “I am a millionaire. That is my religion.” “What price salvation, eh?” And so on.  I can just see Shaw firing one of Undershaft’s cannons at this were he still around.
Michael Gottlieb’s lighting design is satisfactory as are Tracy Christensen’s Edwardian costumes, apart from the drably unflattering coat and hat Barbara wears in the final scene. Apart from his gimmicky intrusions, Mr. Staller’s staging is spirited and his pacing upbeat. But without fully fleshed out characterizations in the secondary roles, it’s hard to sustain continued interest for two-and-a-half hours of Shavian rhetoric. On the other hand, the final debate among the three principal characters is worth the wait, and it’s here that Mr. Daily, as the volatile arms maker, blows up the stage with his enthusiastic arguments.

The world, of course, still has not been able to get rid of poverty, and great national economies continue to be heavily supported by an arms industry whose products get ever deadlier; this makes the issues raised by MAJOR BARBARA still pertinent and the play itself worthy of seeing, even in a less than fully satisfactory rendering.
MAJOR BARBARA
555 W. 42 Street
Through December 14