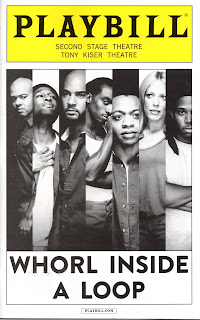 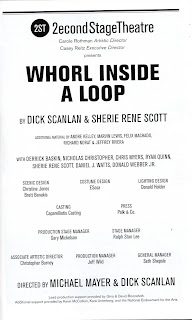 Teachers (bad, good, worn out, inspiring, and every shade in between) have long been a staple of novels, films, and plays. Just a week or so ago a professor friend who’s researching the history of plays about teachers accompanied me to see (as part of FringeNYC) the excellent solo piece, RIPPLE OF HOPE, written by and starring Karen Sklaire, a heroic educator  telling of her own experiences using drama as a way of reaching difficult children in inner city New York schools. Dick Scanlan and Sherie Rene Scott’s WHORL INSIDE A LOOP—whose title refers to a fingerprint pattern associated with talented people, but who show less desirable traits as well—is related to Ms. Sklaire’s piece in its imaginative depiction of its writers’ personal experiences teaching in another potentially tense environment, a men’s prison in upstate New York, where writing and performance helped hardened criminals make personal breakthroughs. Convicts as well as troubled schoolkids can often be rehabilitated through the arts.
In 2011 Mr. Scanlan and Ms. Scott, well known, among other shows, for their successful collaboration on EVERYDAY RAPTURE (2010), a semi-autobiographical musical in which the Tony-nominated Ms. Scott played a version of herself, signed up to teach a personal narrative class to 13 inmates at Woodbourne Correctional Facility through a volunteer organization called Rehabilitation Through the Arts. The class involved getting the inmates to write and perform brief biographical monologues for presentation under the title Theatricalizing Personal Narratives. What began as a one-day workshop proved so successful that additional classes were given once or twice a week for several months.
The abundance of stories, both tragic and funny, painful and poignant, that emerged, and which touched even prison bureaucrats, eventually took seed in Scanlan and Scott’s creative imaginations and blossomed into WHORL INSIDE A LOOP, an intermissionless 100-minute mostly fictionalized amalgam of their experiences. Five of the inmates (four of them eventually paroled) whose stories are integrated into the play—Andre Kelley, Marvin Lewis, Felix Machado, Richard Norat, and Jeffrey Rivera—are credited for “additional material” and earn a piece of the profits for their contributions. Still, ethical and legal questions, described recently in the New York Times, linger.
Although a talented performer, Mr. Scanlan eschews acting here in favor of codirecting with Michael Mayer (HEDWIG AND THE ANGRY INCH), while Ms. Scott plays a character seemingly based on her but called “the Volunteer.” The directors have had designers Christine Jones and Brett Banakis clear the Tony Kiser Theatre’s capacious stage area to reveal the bare walls, painted in drab prison gray, with a large wooden platform and metal chairs serving most needs. A rolling green blackboard stands up left.
A trimly attractive blonde with an insistently peppy personality, Ms. Scott's milky presence (someone calls her “Whitey McWhite”) contrasts starkly with her African American costars (Derrick Baskin, Nicholas Christopher, Chris Myers, Ryan Quinn, Daniel J. Watts, and Donald Webber Jr., all excellent). This orange-jumpsuited ensemble plays not only inmates (each a convicted murderer) but prison personnel (including an acting female warden and a nun who teaches voice and speech) and the Volunteer’s circle of outside family and acquaintances (including Hillary Clinton in a hair salon). With slight alterations of their uniforms and caps (costumes are by ESosa), the actors, playing both men and women, and creating the sound effects themselves, display their versatility through distinctive alterations in body language and speech; despite the laughs they draw, however, these bits—especially the racial and gender-crossing ones—tend to be distractingly exaggerated.
The Volunteer—a Broadway actress doing community service as restitution for a drunken driving conviction—thinking she’d be working at a women’s minimum security prison, is surprised to learn where and whom she’ll be teaching, and of the various security measures she must follow; a running gag about the metal in her bra and the security guard’s inability to say “bra” quickly dries up. Fearing for her safety, and declaring that having a son gives herself something in common with her students, she kicks into gear her revved-up, cheer-leading energy (whose relentlessness, combined with insufficient vocal variation, eventually grows wearying). Quickly, she gains the surprisingly accommodating prisoners’ confidence. A mantra of confidentiality is established: “What Happens in This Room in Prison Stays in This Room in Prison,” or, as an inmate scrawls on the blackboard, W.H.I.T.R.I.P.S.I.T.R.I.P.

Eventually, each inmate gets to perform his monologue (one involving a boy of 16, in prison for 14 years but mentally still 16), and various responses emerge, including the fear of “glorifying” the crimes so openly described. The horrific social conditions that led to their misdeeds are, of course, laid bare. Still, it’s a stretch to accept the premise that each inmate is not only a gifted writer, but a powerful and polished performer, even if sometimes in need of the Volunteer’s coaching and encouragement.

However, drawing attention away from this world of incarcerated literati is the self-absorbed,
occasionally clueless Volunteer’s own story as, breaking the W.H.I.T.R.I.P.S.I.T.R.I.P. rule, she casually gossips about her experiences with her outside friends (including her husband, an attorney, a producer, and a gay "hair therapist"); despite her rationalizations, she’s prepared to use them for her own aggrandizement. These outside sessions allow some discussion of the issue of prison reform, but, in the cartoonish behavior of Ms. Scott's smug white friends, they tend to dissipate what’s happening behind bars.

With WHORL INSIDE A LOOP my professor friend has another interesting, if flawed, play to add to his collection.