"The Dark Is Not Dark Enough" 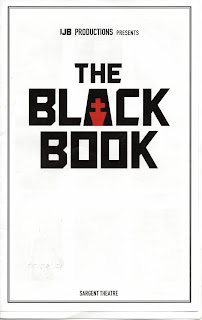 It was just one of those nights, one of those crazy nights a reviewer occasionally bumps into over the course of the hundreds of shows visited during a New York theatre season. The venue was the Serene Sargent Theatre, an intimate, gently shabby space on the fourth floor of an old building on West Fifty-Fourth Street, and the tech staff for Phil Blechman’s play, THE BLACK BOOK, was having problems with the lights. These things happen, of course, so the small audience gathered in the lobby waited patiently to be allowed into the auditorium. Around 8:00 p.m., the youthful Mr. Blechman, who also directed the play, informed us that the malfunctioning lighting board couldn’t be fixed quickly and that we could choose to leave or stick it out and watch the play without its lighting effects. As far as I could tell, everyone chose to stay. Most people, having given up a valuable evening and made the trek to see a play, will choose to remain rather than go home and try again. Who knows, lighting problems could strike twice! 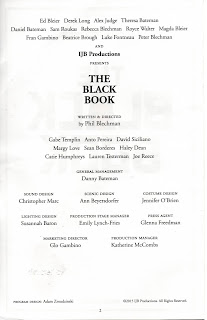 BAD CHOICE!! Not only did the production suffer greatly from the lack of its multiple lighting effects—the exceedingly episodic script calls for blackouts on almost every page—but viewing this muddled, nearly incomprehensible play in the gloom created by a handful of dim houselights was tantamount to having been forced to don a translucent blindfold just before the action started.

THE BLACK BOOK, a well-intentioned play inspired by the suicide of one of Mr. Blechman’s classmates in 2007, was produced at Syracuse University in 2011, had an Off-Off Broadway showing in 2012, and is now, as it says, once more challenging “its audience to stay one move ahead.” My advice is to face that challenge by staying one move behind, or to put it more plainly, by avoiding THE BLACK BOOK entirely.

I’m afraid a brief summary of the plot is beyond my limited skills, and all I can say is that most of the action transpires on a college campus, that it involves a troubled, black-book carrying student (David Siciliano) who’s written a poem that his poetry professor (Gabe Templin) believes may indicate suicidal thoughts; that he and his drama professor buddy (Sean Borders) are somehow inextricably involved in the student’s tortured psyche; that the troubled student is jealous about the relationship between his friend (Joe Reece) and a blonde named Nicole (Haley Dean); that a ghostly girl (Antonieta Pereira) in a white straitjacket with dangling sleeves wanders vaguely through the action; that there’s a female school psychologist (Margy Love), whom the drama professor keeps hitting on, and a female psych professor (Catie Humphreys) who teaches a course about suicide; that time is fluid; that we keep hearing the troubled student's line, "I am slowly going crazy"; that all the women dress fashionably, wear lots of makeup, and have perfect hair; that characters are not who they seem to be; that a rope hanging from a branch as well as a pistol play a role; and that none of it is anywhere near as clear as these random facts may suggest.
And, oh yes, in the one scene that actually got me interested, one of the professors, a Mets fan, has a diatribe about the team’s perpetual tendency to collapse in September whenever it’s doing well. Much as his complaint seems about to become totally irrelevant, given the Mets current ascendency, it was certainly far more interesting than the context in which it was spoken. In fact, I have no idea of why it’s even in the play other than that, perhaps, Mr. Blechman was so frustrated about the Mets that he simply couldn’t resist slipping it into his play to vent it in a public forum.

While its goal of dealing with the problem of suicide is certainly laudable, the play is such a confusing mishmash of surrealism and realism—mingling dreams, memories, soliloquies, direct address, violence, loud whooshing noises (the busy sound designer is Christopher Marc), and numerous other pretensions—all of it performed on a raked stage floor painted as a chess board (design by Anna Beyersdorfer), that whatever message it seeks to convey is lost in the dramatic detritus. (Yes, part of the action is staged as a chess game.) Soon enough you’ll wish that not only the lighting board but the entire electrical system had suffered an outage. Whatever talents the actors have (an open question) are squashed by the opaque script, but they should be congratulated for keeping their poise throughout this fumbled exercise. THE BLACK BOOK claims to have a running time of 99 minutes, not 100, mind you, so you may wish to check its accuracy. Even at 99 minutes, though, it’s at least 89 minutes too long.