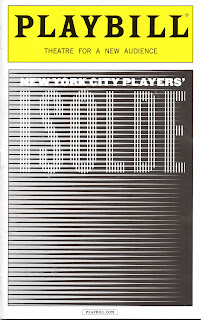 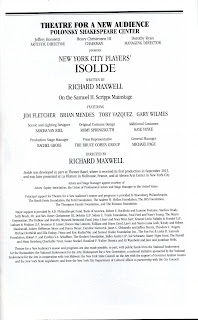 The first sign I knew I wasn’t in sync with playwright-director Richard Maxwell’s highly lauded ISOLDE—shown briefly last year at the Abrons Arts Center and now at Brooklyn’s Polonsky Shakespeare Center—was my failure to find funny the seemingly innocuous lines stirring tentative chuckles in several people near me as well as throughout the theatre. This continued, occasionally varied with more robust bursts of laughter on lines I found easier to appreciate if not to laugh at myself. I realized soon enough that Mr. Maxwell, considered by some to be one of America’s most gifted experimental dramatists, was simply operating on a wavelength into which I wasn’t tuned.

I don’t mean to suggest that others who previously warmed to ISOLDE (including an enthralled Ben Brantley) were off the mark; it’s simply that its story, loosely based on the Celtic legend of the adulterous lovers Tristan and Isolde, best known from Wagner’s opera, while superficially interesting in that regard, failed to engage me either by its ideas, characters, dialogue, or dramaturgy. Partly, this may be owing to Mr. Maxwell’s distinctively cool directorial approach, which uses a symbolically spare setting to arrange his four actors in simple patterns, keeping his use of movement to a decided minimum, and often having his cast speak while looking out toward (but not directly at) the audience. When scenes conclude the actors become themselves, casually moving the chairs to new positions before walking off or joining a new scene; only toward the end, when the play makes a striking stylistic change, are there obvious lighting or other markers defining scene endings and beginnings.

The actors retain a fundamental realism in speech and behavior, although now and then displaying modicums of passion (including a vivid sex scene and a mock duel with swords); there’s a dispassionate air to them, as if they’re deliberately holding in their feelings. This rather dry, pause-filled style sometimes reaps rewards when, because of the contrast between content and delivery, certain lines resound more sharply than they might otherwise. The dialogue itself is mainly realistic, and there are several eloquent ruminations on memory and love, but some passages are decidedly elliptic and, on the page, incomprehensible. The combination of realism and aloofness must be difficult to sustain, but the actors do it admirably, maintaining their concentration and thereby implying, if not demonstrating, a deeper level of emotion than may be apparent on the surface. Over the course of an intermissionless hour and 25 minutes, however, the exercise grows thin, and I was thankful to be rescued from growing sleepiness, if only briefly, by the more notably theatricalist shift taken toward the end.
ISOLDE is about a late 40ish couple, the title character (Tory Vazquez, Mr. Maxwell’s wife), a famous actress and her husband, Patrick (Jim Fletcher), a successful contractor. Although they already own several homes (and four cars), Isolde envisions an ecologically advanced dream house on a lake near where she and Patrick are presently living. Isolde’s memory is slipping (we watch her struggle to learn her lines to a new play) and she may be in the early stages of dementia; Patrick, hoping it will be therapeutic, indulges Isolde in her project. She engages a dashing, award-winning, published architect, Massimo (Gary Wilmes). He, however, given to theoretical bloviating, and clueless about guy things like sports and wine, produces only a sketch of his ideas. This brings him into conflict with the practical-minded Patrick, who detects impracticalities in the project and needs to see plans, blueprints, and a budget. His skepticism is matched by that of a relative, Uncle Jerry (Brian Mendes), also in the home-building business, and desirous of landing the architect’s contract. Meanwhile, Massimo is more concerned with conducting an affair with Isolde than satisfying her husband’s demands.
After Patrick decides to fire Massimo, the play shifts stylistic gears to present a mimed tab version of a Tristan and Isolde play, apparently the one with whose lines Isolde has been struggling and which she still can't master. Some of Wagner's music can be heard in the background. The actors wear medieval costumes and the set is altered by the opening of an upstage curtain painted with a rustic glade. The action then returns to a scene between Jerry and Massimo before coming to an ambiguous end.
For most of the play, the action transpires in a minimalist set (designed by Sascha van Riel) representing Isolde and Patrick’s ostensibly luxurious home as merely a collection of partial, unadorned wall units, the supporting timber for one clearly visible so as to emphasize its artificiality. Furnishings are represented by stackable chairs, a modern leather love seat, and a drink trolley. There’s surely a symbolic relationship between the incomplete home we see, the troubled marriage of its residents, and the “perfect” home Massimo has been hired to design, but, honestly, when ISOLDE ended, I really didn’t care one way or the other and wanted only to return to my own imperfect home for a cup of Maxwell House--the caffeinated kind.
OTHER VIEWPOINTS:
New York Times
Daily News
Vulture
AM New York
New York Post
Theater Pizzazz!