61. Review: DESIRE: AN EVENING OF NEW PLAYS BASED ON SIX STORIES BY TENNESSEE WILLIAMS

"Tennessee Williams: As You May or May Not Desire Him" 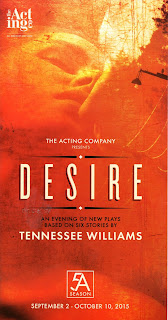 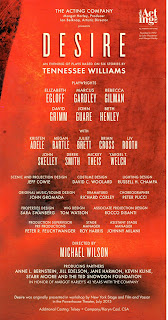 The Acting Company, still going strong 43 years after being founded in 1972 by John Houseman and Margot Hartley (the latter continues as its producer), has on several significant occasions turned literary properties—like THE ROBBER BRIDEGROOM (1975) and THE HEART IS A LONELY HUNTER (2005)—into viable works of theatre. It does so once again with DESIRE: AN EVENING OF PLAYS BASED ON SIX STORIES BY TENNESSEE WILLIAMS, a two-act program of adaptations by a half dozen highly regarded dramatists. This kind of thing is always a dangerous undertaking as the literary requirements of the short story form and the dramatic ones of one-act plays don’t always mesh, even when the short story writer is also a great dramatist. Perhaps that’s why Williams chose to write these works as stories rather than plays. The plays on view—each with its own take on the titular theme, one that (on the basis of how loosely it applies here) can be hung on many other plays—range from mediocre to memorable.

Playwriting issues aside, Williams lovers will appreciate that several of the plays contain material reminiscent of characters and themes found in his major dramas; spotting such refracted images in other guises is part of the pleasure of this nicely staged, attractively designed, and generally well-acted evening, although Michael Wilson’s direction works better in some pieces than in others. Each play takes place on Jeff Cowie’s effective unit set of wood-planked floor and backdrop, with an odd tree-like construction standing down right whose upper portion is reached by a ladder. Mr. Cowie’s lovely projections, the attractive costumes of David C. Woolard, and the exquisite lighting of Russell H. Champa help overcome some of the weaker plays’ problems while also making the more successful ones better. The plays, by the way, are not necessarily close adaptations of their sources; each playwright was encouraged to take appropriate liberties to realize the stories on stage. Most are placed in or near their original periods, but two are updated to today.

Leading off is Beth Henley’s “The Resemblance between a Violin Case and a Coffin,” from a 1950 story. Set in a small southern town in the 20s, this slight, elegiac piece focuses on 14-year-old Roe (Juliet Brett, excellent in a role that instantly conjures up Laura Wingfield) and 11-year-old Tom (Mickey Theis), loving siblings who occupy their time playacting in sketches of their own devising. Roe, a talented piano student, is paired by her teacher, Miss Alley (Kristen Adele), for a duet with a newcomer, Richard Miles (Brian Cross), a golden lad who carries his violin in a case. Tom, fearful of losing Roe to her budding friendship, presciently likens the case to a coffin. The pulsing bond between Roe and Richard is rendered null when, shortly after Roe experiences her first period (the bit with her bloody undies isn’t needed), she succumbs to psychological issues. Richard’s sad fate a year later is briefly narrated by Tom, still burdened by his sister’s problems, remembering it all years later. Tom’s attraction to Richard in the story, though, is missing here.
Although the play teeters on the brink of preciousness, Mr. Wilson—doing his best work of the evening—manages to lift the skimpy material to a higher plane through imaginative staging, especially when a bicycle is represented by two boys holding and spinning a wheel apiece, with the rider in between, as it circles the stage accompanied by offstage piano music and the projection of spinning wheels upon the background. Filling in as Roe and Tom’s mother and grandmother, respectively, are Megan Bartle and Liv Rooth.
In the evening’s least interesting piece, Elizabeth Egloff’s dramedy “Tent Worms,” based on a 1980 story but set today, two characters hold the stage, a writer named Billy (Derek Smith) and his editor wife, Clara (Ms. Rooth), spending their 15th summer at a rented cottage on Cape Cod Bay. Billy’s preoccupied with an infestation of tent worms in the foliage, while his editor wife is drowning in Tom Collinses. They discuss his new novel, about “an old Nazi and a mountain lion on Coney Island” and lament how things have changed locally, which Billy attributes to the devastation wrought by the tent worms. Even sex with his yearning wife can’t distract him from his obsession with the troublesome insects, a metaphor for some mortal illness he’s suffering from, in addition to his writer’s block. The actors do their best, but this uninvolving play, with its dreamlike conclusion involving a fire and the appearance of a handsome, shirtless fireman, fails to click.
More interesting, if mainly because of its depiction of Betty, the girlfriend alluded to by Jim O’Connor, the Gentleman Caller in THE GLASS MENAGERIE, is John Guare’s “You Lied to Me about Centralia,” based on the 1943 story “Portrait of a Girl in Glass.” (It was published in 1948, four years after the play premiered in Chicago prior to its 1945 New York opening.) The story, thus, came before the famous play.

We meet Jim (Mickey Theis) and Betty (Megan Bartle) as they sit on a bench at the Wabash Railway Depot in St. Louis, where Jim’s upset because he’d waited for her on the track from Centralia when, in reality, she was returning from Granite City. Her mission: to ask her well-off Uncle Clyde, whom she barely knows, for a $600 wedding gift. He denied her request, offering instead a Dutch oven and two steel pots, everything painted to look like granite. She also admits to feeling “sick” about his relationship with his black “secretary,” Rainbow. Jim describes the evening he spent, while she was gone, at the home of his shoe factory coworker, the poetry-writing “Shakespeare,” along with Shakespeare's sister and mother, an account that varies in small details from how Williams immortalizes the event in THE GLASS MENAGERIE. Betty’s superficiality and small-mindedness, including derogatory remarks about Shakespeare’s effeminacy, make her the perfect embodiment of the girl Jim shouldn’t be marrying.
Without its connection to THE GLASS MENAGERIE, this play would be disposable, but both actors, especially the delightfully prattling Ms. Bartle, make it work.

The audience returns after the intermission for “Desire Quenched by Touch,” Marcus Gardley’s adaptation of “Desire and the Black Masseur,” in which the eponymous character, Fountaine Le Grand (Yaegel T. Welch), a sweet-talking man in his 30s, is having his comments recorded by the racist, homophobic Detective Michael Bacon (Mr. Smith). The place is New Orleans, the time 1952 (four years after the story was written), and the case involves a missing young man, a white mortician named Anthony Burns (John Skelley). Grand recounts his experiences as the gay Burns’s masseur, telling of the young man’s masochistic requirements and how he gradually became absorbed in supplying what his well-paying customer demanded. Ultimately we see the results of the men’s sadomasochistic relationship, whose conclusion explains why Burns disappeared. Think Sebastian in SUDDENLY LAST SUMMER.

You may not have an appetite for this sort of thing, with a character who cries out, “HURT ME, I SAID! I WANT TO BLEED!!!!” but it’s well enough done, especially the increasingly macabre scenes at the Turkish Baths. Mr. Welch and Mr. Skelley give standout performances.
“Oriflamme,” based by David Grimm on a 1974 story (its title referring to a kind of battle flag), is a two-character play serving mainly as a showcase for the female character, the bleached blonde, Jean Harlow-ish Anna (Ms. Rooth), who, seeking some sort of personal “revolution,” finds herself in an elevated section of a St. Louis park on a hot day in 1939, where she meets a crude boozer named Rodney (Mr. Smith), “Hooch” to his friends. (This character, not very well fleshed out here, isn’t in the original, which focuses exclusively on its unnamed heroine.) Rodney’s distracted from his racing form by this attractive department store sales clerk who appears, like a dream, in a striking red silk evening dress. (The script says the dress clings “to a ravaged body,” but there’s nothing ravaged about Ms. Rooth’s physical attributes.) Anna’s cursed with theatrical garrulity, speaking in an even more heightened lyrical manner than Blanche DuBois, of whom she’s clearly an avatar; her emotional vulnerability clashes with Rodney’s prosaic earthiness (vaguely shadowing Stanley Kowalski), leading to a momentary but interrupted sexual engagement and ending with a moment out of CAMILLE.

The Blanche connection is the sole reason for this play’s interest, and Ms. Rooth does a quite lovely job despite having to speak so many overwritten, pseudo-poetic lines, many of which suggest a far higher level of education than a sales clerk would have. At least Blanche was a teacher.

Happily, a more substantial piece, “The Field of Blue Children,” adapted by Rebecca Gilman from a 1939 story, provides a satisfactory finale. On the other hand, very little about it has the aura associated with the playwright. It’s not unlike how the movie CLUELESS gave Jane Austin’s Emma a contemporary vibe. Updated to the University of Alabama in the present day, it depicts a group of college students afflicted with many of the amusing tics and attitudes we often see in kids that age today, albeit charmingly heightened for the stage.
Fashion, hair, and makeup are preoccupations among Layley’s friends (Chacos or Tory Burch are the sandals of choice). Layley (Ms. Bartle), a typical sorority girl (called Myra in the source story), is taking a poetry workshop in her senior year because she wants to improve the way she speaks. She and the poetically talented Dylan (Mr. Skelley), whose poems move her, are attracted to each other; Dylan (Homer in Williams’s story) sees, by comparison, how snottily critical Meaghan (Kristen Adele), his Birkenstocks-wearing girlfriend, is. Layley—fighting conventional expectations—decides to ignore the “big game” (Alabama vs. Ole Miss) to attend a poetry reading with Dylan. Uncomfortable in her own skin, she feels as if she’s misplaced something, and is standoffish with her handsome jock beau, Grant (Brian Cross). Dylan, alone with Layley, encourages her to find her own voice in her writing, which leads to canoodling, which leads to his head going under her dress, which leads to her spewing a nonstop stream of trivialities as she gasps and sighs until, as her chatter coincides with her feelings, Dylan completes one manful task and begins another. Will Layley overcome expectations to stay with the poet, or will she return to the jock? And will she ever discover just what it is she feels she’s missing?
Although thematically connected to Williams’s writing, “The Field of Blue Children” may not sound or feel like it sprang from one of his works. Perhaps that’s because, in Ms. Gilman’s original way with her characters and dialogue, she’s spun something new and original from her inspiration. Given its terrific performances, it brings the otherwise uneven evening to a smoothly satisfying close.
Onstage
TheaterPizzazz!
New YorkTimes
Newsday
New YorkTheater
Daily News
New York Post
WNYC
Talkin’Broadway
See SHOW-SCORE.COM, the Rotten Tomatoes for theatre

DESIRE: AN EVENING OF NEW PLAYS BASED ON SIX STORIES BY TENNESSEE WILLIAMS
59E59 Theaters
59 East Fifty-Ninth Street
Through October 10