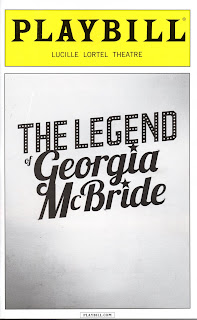 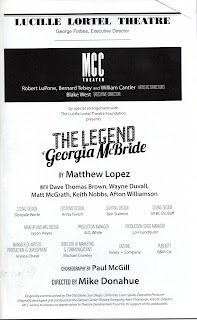 On the one hand, Matthew Lopez’s THE LEGEND OF GEORGIA McBRIDE is a cliché-ridden, sentimental, contrived, totally implausible, and frequently predictable backstage soap opera cum lip-syncing musical offering yet another view of the world of flamboyant drag queens (see, for example, KINKY BOOTS and HEDWIG AND THE ANGRY INCH). On the other, however, the material has been transformed into a thoroughly engaging, sometimes hysterically funny, occasionally poignant, and perfectly cast production, part play-part drag show. There was so much electrical enjoyment at the preview I attended, that, if Off Broadway’s Lucille Lortel Theatre could have harvested the buzz, it would have enough juice to light the joint for a week.
Designer Donyale Werle has created a unit set that combines the cheesiest of honkytonk barroom dressing rooms with an equally decrepit apartment in Panama City, Florida; when shiny streamer curtains drop into place, the rattrap setting is instantly converted into a vibrant stage for a spectacularly costumed and bewigged drag show, taken to another dimension by Ben Stanton’s creative lighting. Featuring a cast of five (with Keith Nobbs playing two sharply contrasting roles), THE LEGEND OF GEORGIA McBRIDE makes stage-worthy hay out of a simple premise that, while hard to swallow, nevertheless slides down smoothly when lubricated by the charm of its performers.

Casey (Dave Thomas Brown) is a slender, sweet-faced, and rather decent Elvis impersonator (sans dark hair, wig, or sideburns) at Cleo’s, a rundown, failing bar/performance venue run by the avuncular Eddie (Wayne Duvall, just right), who also serves as the clumsy (at first) MC. Casey and his wife, Jo (Afton Williamson, on the mark), a fast food worker, are way behind in their rent, but the overly optimistic Casey, thinking his act’s on the cusp of a breakthrough, buys himself a fancy Elvis jumpsuit that puts the couple even deeper in the hole. Their grungy friend and landlord, Jason (Mr. Nobbs), threatens to evict them despite Jo’s discovery that she’s pregnant. Making matters much worse, Casey’s fired by Eddie, who, desperate to boost his flagging business, hires his cousin Bobby, a towering, middle-aged drag queen known as Miss Tracy Mills (Matt McGrath), as his new attraction.

Miss Tracy’s not unlike other drag queens you've seen on stage, replete with flamboyant wigs, costumes, and demeanor. She’s wise and caring, yet notably vulnerable, and quick on the trigger with laser-sharp, bitchy zingers. Gifted with a heart of gold, she suggests that the depressed Casey stay on as a bartender. But when her equally glitzy, but more acerbic, booze hound partner, Roxy (Mr. Nobbs)--stage name Ms. Anorexia Nervosa--whose act includes a routine as French chanteuse Edith Piaf, gets stinko and can’t perform, Eddie orders Casey to go on her place, but as Piaf (of whom he’s never heard), not Elvis.
This opens the door for a sensational sequence in which the determined Miss Tracy dresses the reluctant Casey as Piaf—a wickedly funny transformation, with its improvised wig, underwear, and female padding. She gives him urgent pointers on how to fake his lip-synced performance of the French lyrics to “Padam, Padam,” not a word of which he understands, by mouthing “watermelon motherfucker.” Totally ill at ease, Casey’s a trouper, though, and manages to stumble through well enough that he becomes the disgruntled Roxy’s replacement. The crowd buys it, the money starts getting tucked in to where bar patrons tuck money, and we soon watch Casey’s nightly improvement, under Miss Tracy’s guidance, to where he not only does a knock-your-socks-off job but actually looks gorgeous doing it.

The dramaturgic kicker is that Casey’s so ashamed of his new profession that he fails to tell Jo about it, even when his new-found income pays off all their bills, with plenty to spare. Whatever suspense there is lies in how she'll react when she finds out, but meanwhile the play, which takes its title from the stage name Miss Tracy improvises for our hero, spends nearly as much time providing examples of the budding star’s gender bending chops, as well as those of the fabulous Miss Tracy. There’s even a surprisingly extended show-within-the-show during which the mentor and her mentee run through a wild and wacky medley of over the top lip-synced numbers, wearing a series of uniquely styled costumes (kudos to Anita Yavich, who must have had a ball) and wigs (a bang-up job from Jason Hayes). Coming almost as welcome relief from this memorably raucous songfest is a quietly simple folk song of Casey’s own creation, sung as he sits on a stool in a lacy white dress, strumming on a guitar.
This MCC Theatre production, brightly staged by Mike Donahue and lovingly choreographed by Paul McGill, is as feel-good a show as you can want, so everything comes together at the end, and not only Roxy but Eddie and Jo are able to join in the gratifyingly delightful grand finale. It’s all schmaltzily manipulative, but I’ll still take it over most of the shlock one has to sit through in the average theatre season.
Dave Thomas Brown and Matt McGrath lead a terrifically talented, highly charged ensemble. In what should be a star-making performance, Mr. Brown is outstanding as the struggling, ambitious Elvis wannabe who can’t bring himself to tell his wife the truth about how he's been earning all those symoleons. His metamorphosis from an ostensibly straight guy into a stunningly convincing cross-dressing entertainer is thoroughly impressive. Equally unforgettable is Mr. McGrath, who originated Miss Tracy when the show premiered at the Denver Center Theatre Company; he carries himself with regal assurance, combining strength and dignity with perfect comic aplomb, sometimes archly dry and sometimes with hilariously zany facial reactions and vocal sounds.
When the intermissionless LEGEND OF GEORGIA McBRIDE, which runs an hour and 45 minutes, concludes, you may want to stuff a few dollar bills down some padded bosoms yourself. 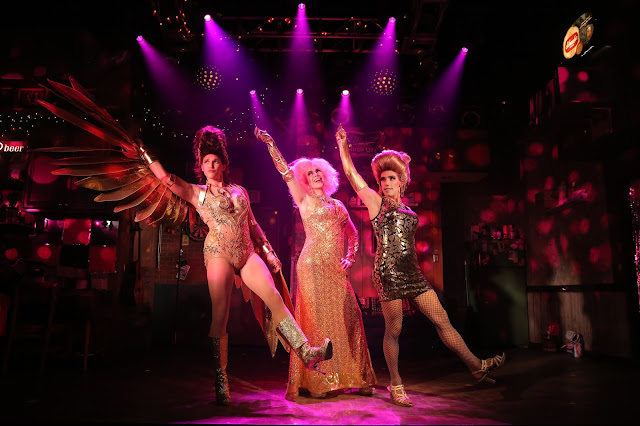