"A Pondling from Across the Pond" 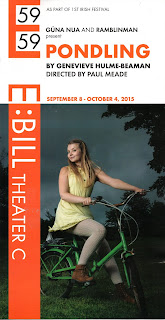 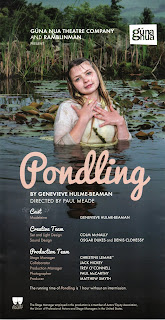 In PONDLING, Genevieve Hulme-Beaman, an interesting young Irish actress-writer, stars in her own offbeat, lyrical, yet slightly grotesque, one-hour solo play. This is a dark, not quite realistic comedy about a prepubescent farm girl with vivid fantasies of glamour and romance; its title refers to the girl’s likening of herself to a swan. The hour-long play is in the tiny Theater C at 59E59 Theaters under the auspices of Dublin’s Gna Nua Theater and Ramblinman as part of Origin’s 1st Irish Theatre Festival. Ms. Hulme-Beaman won the Best Actress Award of the 2013 Dublin Fringe. PONDLING also played the Edinburgh Fringe.

The unnamed child, who calls herself Madeline Humbel Buttercup, wears a little girl dress and sweater, patent leather Mary Janes and white knee socks, her hair parted in the center with barrettes; she looks a tad like Alice in Wonderland, but she’s nothing like Lewis Carroll’s heroine. She lives with her brother and grandpa on a rural Irish cattle farm where her closest friends are the chickens, whom she’s taught to like her by feeding them a barley porridge, but she’s also familiar with the indignities of being shat on by a cow. She escapes her gritty surroundings by riding her "Little Pony" bicycle and fantasizing about the handsome 14-year-old Johnno Boyle O’Connor, with whom she longs to make love and smoke cigarettes. For all her determined efforts to catch his eye, including regularly working out to an exercise video, he barely notices her. Johnno, in fact, already has a sweetheart, a “long armed” girl whose identity the jealous “Madeline” is eventually dismayed to discover.

Madeline, innocent as she may superficially appear, is actually a strange and lonely little girl, one that passes her time crushing cans and thinks nothing of trying to yank a chicken’s head off to show a newly befriended rich girl what happens afterward. The scene where she does this, all in mime, of course, is disturbing, but, given what she’s already done with a cat and one of her grandpa’s cows, not entirely surprising. Her obsession with feminine glamour is also rather bizarre, especially when she has a chance to immerse herself in it on finding herself alone in the bedroom of her new friend’s beautiful mom, a sanctum replete with every accouterment the beauty-addicted, apparently motherless child could desire.
As directed in a heightened style by Paul Meade on a spare set (designed by Colm McNally) occupied mainly by beaten up old suitcases and a freestanding window and window seat, Ms. Hulme-Beaman convincingly carries off the illusion of being around 12, giving her an oddly disturbing charm, a malicious smirk sometimes stealing over her face, and a touch of cruelty invading her burning eyes. At times, you wonder if she isn’t mad; taken literally, she’s not a kid who’d have the freedom to behave as she does, nor would her rich friend’s mother trust her for a minute, so you’ll have to work at suspending your disbelief. Her movements are broad and gangly, and the angles of her arms, hands, and fingers cut distinctive patterns, especially when lit from below to throw eerie shadows on the wall (Mr. McNally also did the lighting).
Making the most of her surprisingly potent voice and sharply articulated accent, more British than Irish, she spouts a poetic prose that’s both captivating and a bit off-putting with its occasional vulgarities and sprinklings of French. (I love the line about a kiss that ends with “a saliva string of love” connecting lovers’ lips.) Indeed, her whimsical imagination often takes her off to France, where she whizzes about in a convertible, her hair flying as she smokes a cigarette. At one point, she even sings Edith Piaf’s “If You Love Me.” This, though, is not someone it would be easy to love.

PONDLING is a fine showcase for Ms. Hulme-Beaman, both as a writer and performer. She'll be welcome on these shores anytime she chooses to wing her way across the pond.