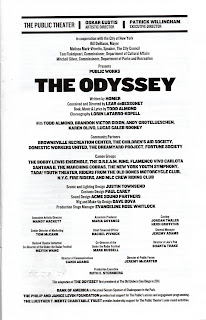 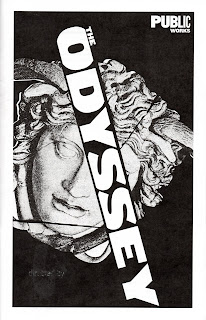 When “Welcome Home,” the  rousing, full-company finale of the Public Works production of Homer’s THE ODYSSEY at the Delacorte Theater in Central Park never seemed to end—as if unwilling to abandon the joy and love the show represented among its seemingly countless participants—I decided to take my leave, hoping to avoid the crush of the full house’s exiting crowd and catch my train for the long ride home to South Queens. As I hit Central Park West, I could–even with my faulty hearing—still hear the raucously happy sound floating through the warm nighttime air from the Delacorte, a sound that seemed to be boldly holding the end of summer at bay. But it was, after all, 10:00 p.m. on a Labor Day evening, the summer—at least the New York theatre’s summer—was now officially over, and, like Odysseus journeying home to Penelope in Ithaca at the end of the Trojan War, time to return to my patiently awaiting wife in Howard Beach. Happily, the subway trip took just an hour, not the 20 years marked by Odysseus’ odyssey. And, for once, there weren't any drunks, beggars, preachers, peddlers, pole acrobats, or break dancers to serve as surrogates for the Cyclops, Circe, or any of the other obstacles met by Homer’s hero.
For three years now, Public Works, a project sponsored by Public Theater (run by artistic director Oskar Eustis), has produced a summer-ending spectacle at the Delacorte—the previous ones being THE TEMPEST and THE WINTER’S TALE—with casts made up of over 200 participants combining a small contingent of professional actors with huge ones of amateurs from various community organizations. Given the diversity of ethnicities, communities, and ages (tot to tottering) involved, this is the New York City experience at its finest. Pulling it all together again for THE ODYSSEY is the young director, Lear deBessonet, who conceived the work, and the book writer, composer, and lyricist, Todd Almond. The lanky Mr. Almond, who’s also a capable performer, appears dressed in a black suit and open-collared white shirt to serve as the ubiquitous Singer, narrating the story in song and speech, and performing with the four-piece orchestra upstage right; he’s sometimes joined there by a cute backup trio, the Calliopes (Kelly Campbell, Joanna Fuentes, Mayelyn Perdomo).
Ms. deBessonet’s work channels the pageant productions begun in early 20th-century Europe and introduced in America as “Civic Theatre” by poet Percy Mackaye, best represented by his 1914 “masque,” CALIBAN BY THE YELLOW SANDS, inspired by THE TEMPEST. That extravaganza premiered in St. Louis using the talents of 7,000 citizens (!!), and was revived in New York two years later. Refused permission to use Central Park, he settled for Lewisohn Stadium, where 2,000-3,000 performers played nightly for 20,000 spectators. Central Park, of course, has since become a welcoming performance venue, but it’s unlikely that using so many performers playing for such huge crowds will ever again be possible, but we’ll settle for the Public Works approach, which is still bigger than anything else of its type.
THE ODYSSEY’s four performances are over, but as an event it will remain embedded in the memories of all who saw it. One could find this and that to quibble over, such as its uneven score, or reductionist and not especially dramatic Story Theatre narrative, but none of that matters as Ms. deBessonet and Mr. Almond have once again found a way to bring together a swarm of disparate artists in a heartwarming encounter with a classic story whose enthusiastic retelling helps to unite us all in the human experience.

Once again, we meet Homer’s cunning warrior, Odysseus (Brandon Victor Dixon, MOTOWN), trying to make his way home to Ithaca with his men after serving 10 years in the Trojan War. In Ithaca, his beautiful, eternally patient wife, Penelope (Karen Olivo, IN THE HEIGHTS), has been wooed by many crude suitors wishing to replace Odysseus as king, but has managed to stave them off by delaying completion of the weaving of her husband’s shroud. Her son, Telemachus (Jabari Johnson), longing for his missing dad, is depressed and the citizens are fearful of the thugs—performed in full biker regalia by middle-aged riders from several actual motorcycle clubs—who, as led by Aninous (Lucas Caleb Rooney), are itching to take over.
Meanwhile, Odysseus is delayed for another 10 years by a series of strange adventures, including encounters with the Cyclops (Andy Grotelueschen), suggested by a balloon-like eye on the end of a pole, with red fringes hanging from it; the sexy Circe (Ms. Oliva), masked and wearing shimmying fringes on a tight red dress while surrounded by a phalanx of red-gowned flamenco dancers (Flamenco Vivo Carlota Santana II); the sirens, dressed in sparkling green-sequined dresses and green tinted wigs; Scylla and Charybdis (presented as a shadow show as Mr. Almond describes the action in a  patter song); and the Princess of Phaecia, Nausicaa (Elizabeth Ely), and the Urkle-like prince (Travis Raeburn), in whose supportive presence he agrees to tell his tale. Finally, Odysseus, disguised as a crippled old beggar, is greeted by his faithful dog Argos (Linnea) and son; throwing off his beggar’s robe, he wins a contest in which he fires his arrow successfully through a dozen or so drums (held by the Marching Cobras marching band, in the guise of the Palace Guard) to hit the cymbals representing its target. All the joy in creation breaks loose and never seems to cease.

Holding everything together is dialogue mixing today’s colloquial language with more or less formal locutions; self-referential and self-deprecatory humor; shadow performances on a huge white sheet; era-crossing costumes (designed by Paul Carey) that include ancient Greek tunics, 1950s streetwear, and present day hip-hop gear; songs including vocal-cord busting power ballads, pop, country, hip-hop, and soaring gospel harmonies (sung by the white-robed Bobby Lewis Ensemble, watching from an upper level to represent the goddess Athena); and dances showing off flamenco chops as well as fresh-off-the-streets break dancing (The D.R.E.A.M Ring). (Lorin Latarro-Kopell is credited with the juiced-up choreography.) Making an impact as well are kids from the TADA! Youth Theater, playing underworld spirits, and the New York Youth Symphony. The rock concert-like scenic background and lights are by the ingenious Justin Townsend.

THE ODYSSEY is something of a kitchen sink production, throwing in whatever works, and, since most of it pleases the crowd, everyone leaves feeling satisfied. New York City owes a special gift of gratitude Ms. deBessonet and Mr. Almond, and especially to the Public Theatre. As I write this, I’m kicking myself for not remaining through the entire finale. Then again, maybe it’s still going on.