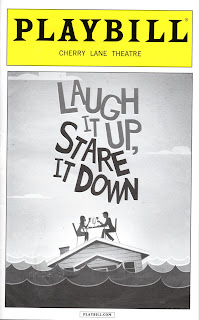 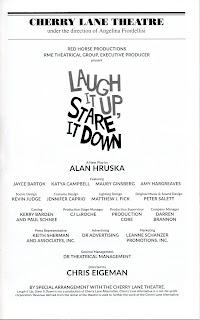 Alan Hruska, author of this uninspired marital comedy at Off Broadway’s Cherry Lane, retired as a law firm partner in 2001 when he was 68, but has since been very active writing novels, film scripts, and plays, as well as doing some directing and even co-founding a publishing house. I’m not familiar with his earlier work, so I can only hope it’s better than this blandly written, blandly performed, and blandly directed (by actor Chris Eigeman) concatenation of scenes from a marriage. Ingmar Bergman, where are you when we need you?
Despite scattered yock-lines, audiences are more likely to stare down this oddly titled play than laugh it up as it recites the marital history of the good-looking, well-dressed Joseph P. Allworthy (Jayce Brown, who bears a passing likeness to Dan Stevens of Downton Abbey), occupation unspecified, and the equally attractive Cleo (Katya Campbell, from Broadway’s DISGRACED). Cleo's a blonde fashion-plate of an anthropologist who looks and acts as much like a member of that species as Margaret Mead resembled Carole Lombard. (Costumier Jennifer Caprio offers little help.)
Following an opening scene in which Joe picks up Cleo (their intellectual level is suggested via strained references to Trollope and Fielding), the couple end up a week later at his apartment (decorated with a tortured self-portrait of Egon Schiele), where an awkward sex scene ensues. Cleo subsequently reveals her pregnancy during a weird date in a French restaurant whose menus are blank, whose only fresh dish is filet of sole, and where the waitress is something of cuckoo bird (Amy Hargreaves).
The play moves through the next couple of decades to show what happens to Joe and Cleo after they marry. Joe becomes wealthy working at a hedge fund; an oddball doctor (Maury Ginsberg) at the hospital where Cleo gives birth informs her that the baby has been lost (the nurse [Ms. Hargreaves] left him in the ladies’ room); Joe and Cleo befriend Dorothy (Ms. Hargreaves), a biologist, and her philandering physicist husband, Stephen (Mr. Ginsberg), opening the door for marital infidelity to enter the plot; Dorothy and Cleo share a scene with a fillip of lesbianism; Joe and Cleo’s home is burglarized by an English-accented thief (Mr. Ginsberg) who plays Russian roulette with his pistol aimed at Joe; a hurricane threatens the couple’s Rhode Island summer house; a presumed Venetian tour guide (Mr. Ginsberg) attempts to seduce the middle-aged Cleo; and, unbelievably, the play ends with Joe and Cleo clinging to a buoy—played by a large, swinging crystal chandelier that has gradually been descending throughout—after a Rhode Island tidal wave strikes. Apart from Kevin Judge’s attractive unit set with a backdrop composed of differently shaped window frames, colorfully lit by Matthew J. Fick, the buoy is the single most creative thing on view.
Mr. Hruska's stilted dialogue has the artificial ring heard in translations from foreign drama, and the general tone straddles an uneven line between realism and absurdism; as many “ideas” as possible are tossed in the pot to make the conversations sound like high-toned comic banter. A principal theme concerns the importance of the choices we make, each scene involving at least one important example, but the characters also touch on sex, romantic love, fate, randomness, destiny, death, and morality, chattering as well about adultery, cancer, and art, much of it either inconclusive, insignificant, or outright ambiguous. To borrow one of Mr. Hruska’s favorite words, most of the dialogue is “blithering.”
LAUGH IT UP, STARE IT DOWN concludes with a clumsily indeterminate final curtain, creating some puzzlement as to whether or not the play has ended. But there’s no mistaking the feeling of relief when it’s clear the thing is over.

LAUGH IT UP, STARE IT DOWN
Cherry Lane Theatre
38 Commerce Street, NYC
Through October 10