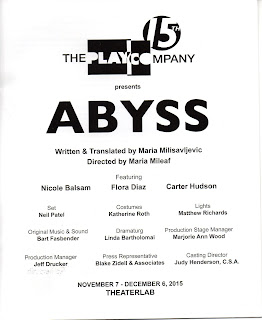 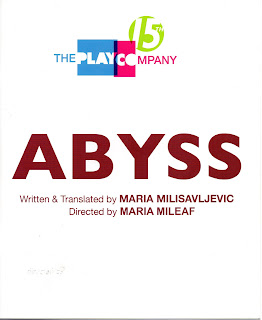 It’s become increasingly rare for translations of recent plays from non-English-speaking countries to appear on New York stages. Despite the plethora of local companies, many with their own niche, none specialize in producing foreign plays. So the Play Company must be applauded for producing ABYSS, a minor but promising play by the German-born playwright-director Maria Milisavljevic, in her own translation, at Theaterlab. ABYSS won the 2013 Kleist Promotional Award for Young Dramatists when it premiered as BRANDUNG in Berlin. ABYSS subsequently was seen in Vienna, Toronto (the Tarragon Theatre commissioned its English version), and London, each production being revised by the playwright to adapt it to the expectations of local audiences.

In adapting ABYSS, Ms. Milisavljevic says she sought to make what German audiences found stimulatingly ambiguous more immediately comprehensible by clarifying the storyline and character intentions. She noted that, if English-speaking audiences “hadn’t gotten ‘what it all meant’ by the end of the night, I had failed to do my job as a storyteller.” Ambiguities do remain, especially at the end, but it wouldn’t be fair to expect the playwright to entirely abandon what gives her writing its distinct tone.

ABYSS is written as a slightly elliptical narrative told by I (Flora Diaz), a Serb who shifts from storytelling to dialogue when she participates in the action. I tells the tale of Karla Richter, a 24-year-old German woman in an unnamed German city that includes a Russian quarter. One recent night, Karla went out to buy cheese for making pizza and never returned to the ménage à trois arrangement in which she’d been living with I and Vlado (Carter Hudson), a man whose father was Serbian and mother Croatian. Living with them is I’s younger sister, Sophia (Nicole Balsam). The script calls the actor playing Vlado “He” and the actress playing Sophia “She.” “He” also portrays Jan, a German computer expert with whom I falls in love. “She” performs as several characters, male and female. The character transformations are presented mainly through vocal and physical changes.
The action concerns the distress caused by Karla’s mysterious disappearance; the dismissive attitude displayed by the German police, who take their sweet time before seriously investigating; the lack of media attention toward Karla, whom they insultingly label “a party girl” when they do cover the story; and the efforts of Vlado, I, and Sophia to sleuth the situation themselves, including the use of social media and a website set up by Jan. Their efforts lead to a vodka-swilling Russian immigrant (Ms. Balsam) Vlado knows from his youth who directs them to a couple of Russian women living in a construction trailer; this brings about their confrontation with an elderly German homeless man (Ms. Balsam) who possesses Karla’s yellow bag, and who may or may not have something to do with her disappearance,
Secrets and lies are exposed, loyalties and priorities questioned, and lovers’ jealousies provoked. The poetic prose is filled with images of water, ice, fire, boots, and diving into the abyss (of despair?). Obscure but suggestive elements keep intruding, such as Vlado’s constantly polishing his knife to help him focus, or Sophia’s frequent interjections of “Do It Yourself” instructions on how to slaughter, skin, prepare, and cook a large rabbit.  Then there’s Vlado’s tendency to scream (on the page, at any rate) and recite lines from a once-popular German ballad about Nis Randers, whose frightened mother tried to prevent him saving a man from a shipwreck during a violent storm; this tic may be the result of his childhood trauma of seeing his mother die when her house was burned down during the Balkan wars of the 1990s. In fact, he seems to see in the eyes of the aged German man the embers of a similar experience. Elements like these tend to give the piece an artsy tone that draws attention from the central narrative. Hints of the difficulties faced by Balkan and Russian refugees living in Germany emerge, but they remain hints, valuable mainly as background color.

Director Maria Mileaf, working in a simple, white-walled room more suitable for play readings and rehearsals than full productions, does a good job of creating an engrossing and suspenseful mood. Set designer Neil Patel provides a spare, minimally furnished environment for the several locales, and the tension generated is helped considerably by Matthew Richards’s imaginative use of limited lighting equipment (much of it in the form of fluorescent lights), and Bart Fasbender’s effective sound design and original music. Two TVs inform us of how much time is passing during the search: “Three days”; “It’s been seven days. A whole week”; “Two days later. Ten days,” etc.

Ms. Balsam, with her multiple roles and accents, makes the most of her opportunities, and Ms. Diaz is reasonably effective in a part that requires her to keep shifting from direct address to character portrayal. Weakest is Mr. Hudson, who brings a modicum of charm to Jan, but makes the suffering Vlado little more than an uninteresting cipher with a tendency to mutter into the abyss of his beard.