“Shave and a Haircut, She's Dead” 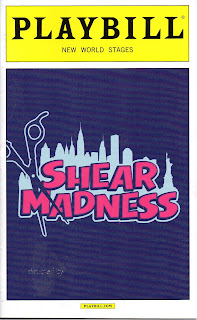 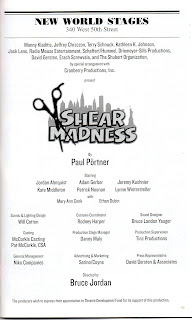 Talk about out-of-town tryouts! SHEAR MADNESS, the endearingly (and enduringly) silly audience participation murder-mystery farce that just opened at New World Stages, clocks in (according to the Guinness Book of Records) as America’s longest-running comedy, even though that record has been compiled elsewhere than in New York. (A few plays have had even longer runs in Europe.) Created by Bruce Jordan and Marilyn Abrams for a Lake George, NY, dinner theatre in 1978, it proved so successful that it was soon being shown in Boston (where it’s been running for 36 years), with companies springing up around the country in Washington, D.C., Philadelphia, San Francisco, Los Angeles, Chicago, and elsewhere, and as far away as Buenos Aires, Athens, Istanbul, Paris, Kuala Lumpur, Seoul, and God knows where else, grossing a reported $232 million. Mr. Jordan and Ms. Abrams have been involved with what has evolved into a cottage industry ever since; Mr. Jordan, who staged the original, is still its director.


This low-brow, highly funny novelty may have delayed its appearance on a local stage because it feared the snooty disdain it would receive from Manhattan audiences and critics. However, judging from the way the crowd I watched it with warmed up when invited to figure out whodunit, they could as easily have been from Podunk as from Park Avenue. I even spotted the New York Daily News critic raising his hand to pitch in with a comment. (He was ignored.)
Resembling a fast-paced, high-energy mashup of Agatha Christie murder mysteries (like The Mousetrap, the longest-running play in history), the board game “Clue,” The Mystery of Edwin Drood, and the louder door-slamming TV sitcoms (you can practically hear a laugh track in your head), SHEAR MADNESS is actually a translation of a 1963 German play called Scherenschnitt by Paul Pörtner, who died in 1984.
It’s set in the brightly lit baby blue, pink, and brick unisex hair salon of the title (lighting and set by Will Cotton), where the flamboyant Tony Whitcomb (Jordan Ahnquist, replacing Jonathan Spivey) cuts men’s hair (and flirts with everything in pants) and gum-chewing, bleached blonde, sexpot ditz Barbara DeMarco (Kate Middleton—no, not that one) handles the ladies. Customers include Mike Thomas (Adam Gerber) and Nick O’Brien (Patrick Noonan), who turn out to be detectives staking out the clip joint; a fashionable Park Avenue socialite, Mrs. Shubert (Lynne Wintersteller); and Eddie Lawrence (Jeremy Kushnier), a shady “used antique dealer.” In one way or the other, everyone’s a stereotype, which is part of the fun; then again, amusing as Mr. Ahnquist is when he’s not overdoing it, the gay hairdresser shtick tends to date the piece.
As per the show’s practice elsewhere, local references are to the city where the show is being performed. Thus Shear Madness’s address is at Ninth Avenue and 50th Street, down the street from the theatre. In D.C., however, it’s in Georgetown. Only time will tell whether jokes referencing things like Hell’s Kitchen will go over in touristy New York. If anything, the show could use more and better Big Apple yocks.
The inciting incident is the murder by barber shears of Isabel Czerny, the famed pianist who lives upstairs and whose incessant playing drives Tony nuts. Her killing precipitates an investigation, with Tony, Barbara, Eddie, and Mrs. Shubert all being potential suspects. The fun comes from the way the show breaks the fourth wall to allow the audience to participate. The characters are asked to quickly repeat everything that’s happened since the play began, and the audience responds—often raucously—whenever something doesn’t jibe with what they’ve seen. So make sure you watch closely if you want to join in.
After the intermission (the play runs two hours), the audience asks questions of the participants, until, finally, a vote is taken as to whom everyone thinks is the guilty party. As in Edwin Drood (and Ayn Rand’s The Night of January 16, which had a different onstage jury at each performance), someone else could be singled out nightly, with the actors prepared to respond with a separate scenario. The actors, especially Mr. Noonan, who handles the investigation, must know their material intimately in order to answer the very specific questions and comments made by observant theatregoers. (It helps that Mr. Noonan has been with the show, off and on, since 1998.)
Many of the laughs are of the wink-wink, self-consciously groan-worthy type, with characters who should know better nuking the language and setting off radioactive puns, double entendres, and malapropisms, which seem to explode in every speech. What do I mean by groan-worthy? How about the close friendship between two women being called a Lebanese relationship? I think I heard a groan. Or someone claiming she knows her constipational rights? Was that another one? Or correcting someone who calls a Steinway a Steinberg by saying they mean Steinbeck? Groan away, but there are so many you’ll eventually have to crack a smile.

There are no cellphones (the play maintains a 1980s ambience), but the wisecracks include a steady stream of up-to-the-minute jibes at pop culture (the Kardashians and Bill Cosby, natch) and presidential candidates such as Clinton, Carson, Trump, and Bush. As in Brendan Behan’s The Hostage, the company has to keep the jokes as fresh as the 6:00 news. The entire cast rises to the challenge of combining improvisation with set-in-stone dialogue and over-the-top characterizations.

Mr. Noonan told a New York Times reporter covering the show that “People aren’t going to walk out of the theater a better person . . . but they will walk out in a better mood.” True. Judging by the response when I attended, SHEAR MADNESS may have found yet another home for its worldwide franchise.