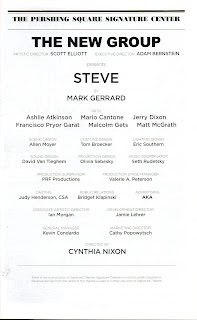 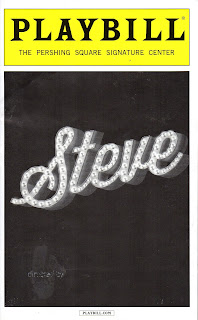 Plays with such characters sometimes combine their comic banter with a serious thread of mortality by having a beloved friend dying of AIDS. In STEVE, this becomes the imminent death from cancer of Carrie (Ashlie Atkinson), an overweight lesbian, abandoned by her lover and finding support among her male pals. Carrie, who wears a headscarf to cover her chemo-caused baldness (someone likens her to Steven Van Zandt), is everyone’s buddy but is especially close to Steven (the wonderful Matt McGrath, so good recently in THE LEGEND OF GEORGIA McBRIDE), a 47-year-old “failed chorus boy.” Carrie’s ashes even figure in a final scene played out at the gay mecca of Fire Island. (Steven, it should be said at once, is the center of the Steve-Steven-Stephen-Esteban character name game with which—to the audience’s occasional confusion—Mr. Gerrard has fun.)
The principal action concerns the troubled partnership—they’re not married, although the subject is mentioned—of stay-at-home Steven and corporate lawyer Stephen (Malcolm Gets), who have an eight-year-old adopted son, Zachary. Their troubles begin when, as they and their friends sit around a restaurant banquette celebrating Steven’s birthday, the birthday boy reveals his discovery that Stephen has been sexting with Brian (Jerry Dixon), boyfriend of their friend Matt (Mario Cantone). The cute young Argentine waiter, Esteban (Francisco Pryor Garat), a dancer, soon befriends the group and keeps popping up in their lives at his various waitering jobs. One other Steve, a muscular personal trainer referred to as “Trainer” Steve, never appears, but is part of most conversations, including a hilarious one in which he figures as part of a threesome with Matt and Brian.
STEVE, with its chirpy sit-com ambience, moves along swiftly, using a simple but attractive set (designed by Allen Moyer) of a translucent back wall broken into Mondrian-like panels that take Eric Southern’s attractive lighting well. This allows selective scenic pieces to be brought on and off swiftly as the episodic plot proceeds. When we move to Fire Island, the wall slides to either side, showing a beach-like drop behind it.
Mr. Gerrard occasionally uses the device of creating scenes that express what Steven might have said or done only to retreat to what actually transpired, and there’s also a considerable reliance on the projection of text messages (projections by Olivia Sebesky), since the characters depend a great deal on texting one another. One such scene requires a tour de force performance by Mr. Gets's Stephen, who conducts simultaneous landline conversations and message texting, including a back and forth with Brian, whose filthily explicit comments—replete with graphic images—are getting him aroused.

If you take your seat 15 minutes before the show begins you’ll be treated to a medley of old Broadway songs (“Friendship,” “Bosom Buddies,” “All That Jazz,” and so on) sung by the ensemble gathered casually around a piano (played by the talented Mr. Gets), providing an enjoyable foretaste of the people with whom you’ll be involved for the play’s 90 intermissionless minutes. There’ll be a few other songs along the way, and a pleasant closing medley, choreography included, with sprightly curtain calls performed to a song from the film of THE SOUND OF MUSIC, with which I, too, shall leave you: “So long, farewell/Auf Wiedersehen, adieu/Adieu, adieu/To you and you and you.”