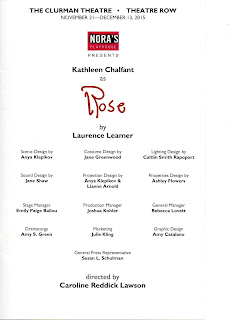 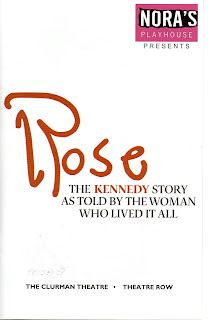 On the surface it would seem that Rose Fitzgerald Kennedy would be perfect material for a one-woman biographical play, the kind that allows an actor to inhabit an historical person and tell her story in an intimate, personal way. After all, Mrs. Kennedy, who lived to 104, was the matriarch of the most famous American political family; despite all the trappings of a privileged upbringing and fabulously wealthy marriage, she suffered a series of personal tragedies, enduring them with remarkable dignity and fortitude—thanks, in part to her devout Catholic faith.

But if ROSE, Lawrence Leamer’s solo play about Mrs. Kennedy, produced by Nora’s Playhouse, politely directed by Caroline Reddick Lawson, and starring an elegantly controlled Kathleen Chalfant, is any indication, she was a reticent woman and emotionally distant mother (especially to her daughters), subservient to her father and husband, believing women must make compromises for their men: “All my life I have obeyed men.” Ms. Chalfant’s reserved, delicately nuanced portrayal doesn't make her a gripping theatrical presence, no matter how powerful her family or tragic her life.

Ms. Chalfant, one of New York’s most distinguished and respected stage actresses, strives hard to inject dramatic interest into a character who—except for a few mild emotional outbursts and a gentle joke or two—simply doesn't appear to have been as charismatic as Jack, Bobby and Teddy. (She's the antithesis of another famous woman who recently ruled the stage: Gov. Ann Richards, as embodied by Holland Taylor in ANN.) The actual Rose, in fact, as seen in interviews on YouTube, comes off with more verve and color, almost suggesting something of a minor Katharine Hepburn; even Rose’s decided Boston Brahmin accent is tamped down in Ms. Chalfant’s restrained performance.

Mr. Leamer, whose first play this is, is the best-selling author of a trilogy of Kennedy books, so ROSE, based on 40 hours of taped interviews to which he had “unprecedented access,” carries the weight of authenticity. He sets the action in 1969, placing us in the 79-year-old Rose’s tastefully decorated living room (designed by Anya Klepikov) in Hyannis Port. The rear wall represents the partly draped windows through which one can presumably view the waters of Nantucket Sound on which Ted ("Teddy"), Rose’s only surviving son, is sailing before coming to visit. Rose, dressed in a lovely, white pants suit (designed by the distinguished Jane Greenwood), a rope of pearls around her neck, and her black hair carefully coiffed, welcomes us, the audience, into her home. Neither I nor my guest heard any reference as to who we are supposed to be, and the script doesn't make it clear, but a friend who saw the play a few days later, as well as another reviewer, note that the audience was intended to be understood as a Dublin ladies' auxiliary group.

Not long before, Ted was involved in the drowning death of Mary Jo Kopechne when he drove his car off a bridge while taking her home from a party on the island of Chappaquiddick. This became a national scandal that put Ted’s career on the line, and it provides the key that sparks the play’s ignition. As Rose waits for Ted’s arrival, she rambles through her memories, and peruses a photo album whose images are projected on the rear windows (thanks to designers Anya Klepikov and Lianne Arnold). Upstairs, her bedridden husband, the once powerful Joseph P. Kennedy, lies powerless after suffering a massive stroke eight years earlier.

Rose’s discourse is interrupted several times by phone calls from close family members: her alcoholic daughter, Patricia (whose marriage to movie star Peter Lawford failed); Ted’s alcoholic wife, Joan; Jacqueline Kennedy, John’s wife, now married to Aristotle Onassis; her daughter, Eunice Shriver; and Ted himself. Oddly, Rose makes no attempt to shield us from the private things she’s saying, further confusing the issue of what we’re doing there. These hurried phone calls are intended to offer fly-on-the-wall insights into Rose's familial interactions but only serve to underline their own artificiality.
Little is revealed during the play’s hour and 20 minutes that anyone paying attention during the peak Kennedy years doesn’t already know, but here and there are nuggets that may not be so familiar. I hadn’t realized, for example, that Red-baiting Senator Joseph McCarthy was close friends with the Kennedys (JFK and RFK were both rabid Communist haters in the 1950s); unfortunately, this potentially fascinating tidbit gets only a single sentence.

Rose’s principal story, of course, concerns her children and her marriage to the influential Boston businessman, Joseph P. Kennedy, who became America’s ambassador to the Court of St. James, eventually lost favor because of his isolationist ideas, and continued to live with Rose while carrying on a series of affairs to which she chose to turn a blind eye. Her Irish-American father, popularly known as Honey-Fitz, was mayor of Boston, and she and her Irish-American husband sought to overcome the prejudice against people of their background.

She had four sons and five daughters: Joe, Jr., “golden Joe,” as she calls him, was killed in World War II, John became president only to be assassinated, Robert was assassinated during his presidential campaign, Ted, a heavy-drinking Massachusetts senator, nearly destroyed his career at Chappaquiddick, her daughter Rose Marie (a.k.a. Rosemary) was given what appears to have been an unnecessary lobotomy, and her daughter Kathleen was estranged from the family for marrying a Protestant, who then died during the war; Kathleen herself died in a 1948 plane crash. Daughter Eunice, who founded the Special Olympics figures in the narrative, although not tragically, but nothing is said at all of daughter Jean Kennedy Smith, a successful diplomat and the only surviving sibling.

There’s no question that the Kennedy story is one of modern American history’s most absorbing, compared by some to Greek tragedy. In fact, we see Rose turning from the Bible to discover solace in Euripides’ HECUBA, about a mother who has lost two children. The Kennedys continue to play an important role in American politics and society. And, for those who don’t know much about them or about Rose Kennedy herself, there’s much to learn from the story of a woman who endured so much grief, and who reveals many of her own potentially controversial personality traits, warts and all. But the drama of this indomitable woman, who declares that, regardless of what happens, her family just keeps “marching forward. There’s nothing we cannot do,” remains subdued, and Ms. Chalfant, while offering a Rose that bears a passing physical resemblance to the real thing, lacks the thorns that might have drawn dramatic blood.