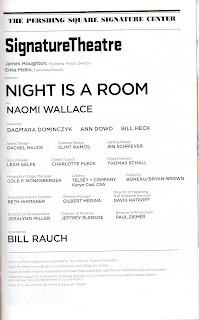 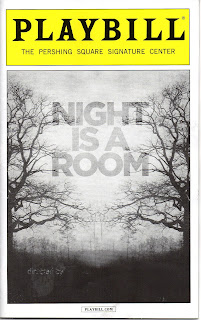 The promotional materials for NIGHT IS A ROOM, a new play from Naomi Wallace—Residency One playwright at the Signature Theatre—refer to “the unexpected turn of events” that occurs in the lives of the play’s three characters; the problem is that it comes three-quarters of the way through the first act. This not only makes everything that follows  anticlimactic, it makes revealing much about what happens earlier a bit tricky.

Ms. Wallace, who comes from Kentucky, sets the play in Leeds, England, where Liana (Dagmara Domincyzk), a beautiful ad agency executive of 43, lives with her attractive husband, Marcus (Bill Heck). He’s a popular history teacher at a girls’ school, where the girls are crazy for him while he deplores their privileging of facts over the emotional reality they represent. (This concern with facts will have ironic overtones later.) Their beloved 21-year-old daughter, Dominique, is studying art in Chicago. The only other character is Doré (Ann Dowd), a frumpy, homely, Yorkshire-accented, 55-year-old domestic worker 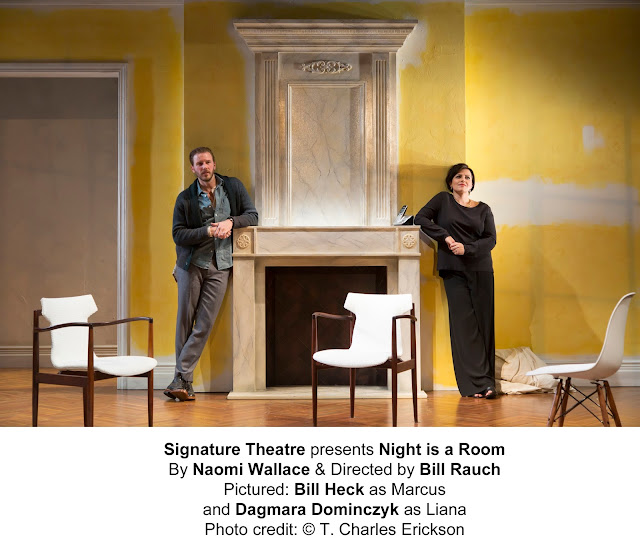 In the opening scene, the fashionable (costumes are by Clint Ramos), posh-accented Liana has tracked Doré down because she’s Marcus’s biological mother. Liana, meeting with Doré in the latter’s shabby garden, thinks what a great idea it will be to reunite mother and son for his 40th birthday. Doré hasn’t seen Marcus since, at 15, she was forced to give him up for adoption. Reluctant at first, the exceedingly shy, almost childlike, older woman agrees. 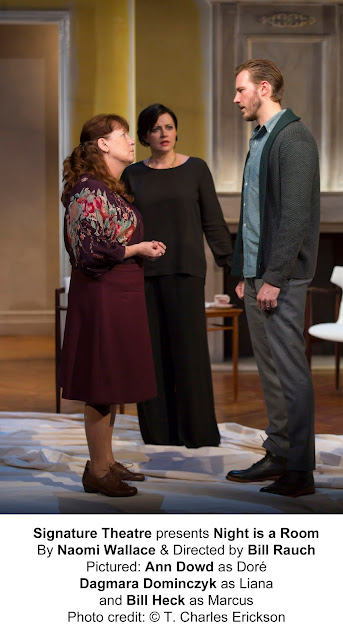 Three weeks pass after the (unseen) successful reunion of Doré and Marcus, who’s been visiting his mother every night, and we’re in Marcus and Liana’s sparsely furnished living room (nicely designed by Rachel Hauck); the elegant place is being redecorated, as signaled by the drop cloths, ladder, and walls prepped for painting. As they await Doré’s first visit, they have a graphic, if clothed, sexual encounter, showing how hot their relationship remains. Or does it? Marcus seems as randy as a young stud, but his interest is only in pleasuring Liana, not himself. Hmm. (Before visiting the theatre, I discovered online commentary by theatregoers who revealed how “shocked” they’d been by something in the production. Could this frank but—in this day and age—not disturbingly naughty scene be what they were referring to? Apparently not.) 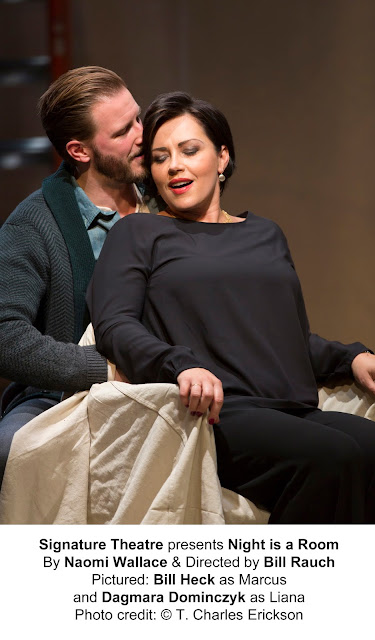 The dowdy, awkward Doré, whose unexpected intelligence and taste Marcus has been touting, enters. Soon, Doré’s reticence dissipates. Preferring to call Marcus by his birth name, Jonathan (which makes Liana uncomfortable), Doré talks of the affinity for trees she shares with him. She then recounts a recurring dream about a tree, a piece of flesh, and a thigh wound. 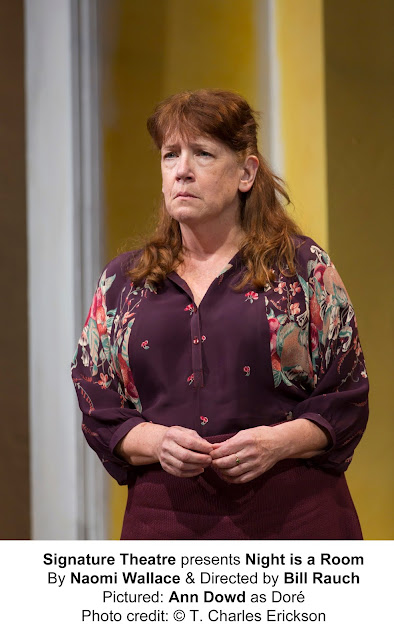 Not long after, the big shocker occurs. Many will find it far-fetched, but the play offers a rational explanation, and several audience members could be seen during the intermission verifying it online. This doesn’t mean, however, that, as dramatized by Ms. Wallace, the subject is being given the most effective theatrical representation. In fact, one could argue that the playwright has done more to sensationalize the matter than to treat it believably,and that the problem is exacerbated by the casting. 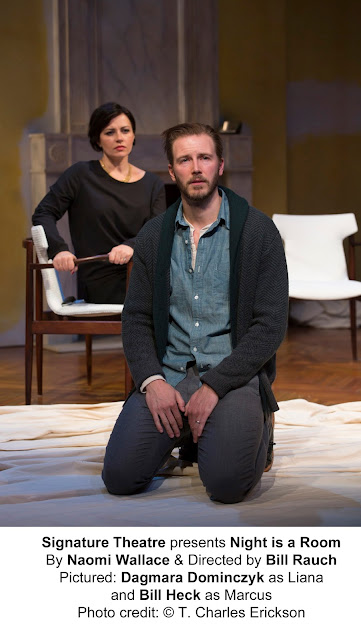 Ms. Wallace’s proclivity for sensationalism emerges yet again in act two, which takes place six years later, although the circumstances wil remain sealed. The only people involved are Liana and Doré, who each have experienced life-changing transformations.They clash verbally and—preposterously, physically—as they work out their issues. Since the play did what it had to in the first act, the second comes off like a Sturm und Drang afterthought. 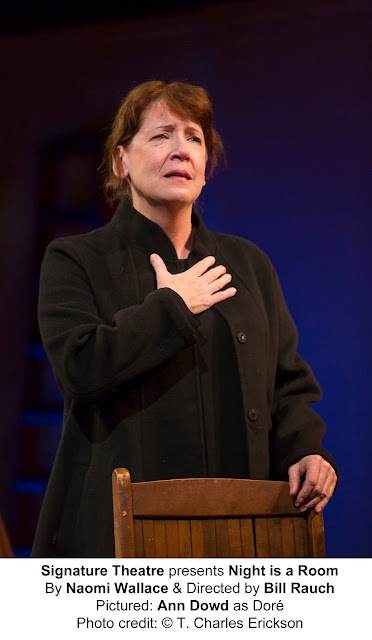 Ms. Wallace initially captures our attention with dialogue that’s ever-so-slightly oblique and gently poetic, the English accents and timing creating a Pinteresque mood of mild suspense. Something’s in the air as we wait for that other shoe to drop. Ms. Wallace’s conversations, which include richly raunchy exchanges bordering on the squirm-worthy, combine naturalistic passages with self-consciously literary ones, as when Liana explains why she calls people in her business “advert whores”:

Though often seen as money-grubbing executives of mass deception, intent on finding the precise instrument to stir the soul into spending its last pound of silver, we're more like poets, really. We find the “it” and then find a way to say it in other words. Our best jingles are set in iambic pentameter, metaphor as bribe and promise, image as loophole, as exemption from the rest.

Whatever one takes away from its provocative material, the production is held together by the compelling performance of Ms. Dowd, whose ability to mingle multiple shadings of wariness and bashfulness with determination and strength creates an intriguing sense of mystery. Mr. Heck and Ms. Domincyzk are both strong actors, but they can't avoid sounding stagy (possibly because of Bill Rauch’s unsubtle direction), thereby weakening instead of bolstering the plausibility of their unusual dilemma.

NIGHT IS A ROOM takes its curious title—never clarified during the play—from a passage in William Carlos Williams’s poem “Complaint,” apparently about a doctor (which Williams was) visiting a woman about to give birth:

Night is a room
darkened for lovers,
through the jalousies the sun
has sent one golden needle!
I pick the hair from her eyes
and watch her misery
with compassion.

I don't know how this applies to Ms. Wallace's play, but I do know there's precious little compassion in it.