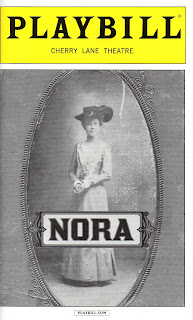 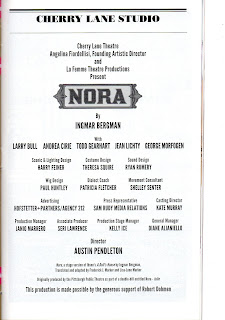 In 1981, the great Swedish stage and film director Ingmar Bergman wrote for the stage an adaptation of Norwegian playwright Henrik Ibsen’s 1879 classic A DOLL’S HOUSE that he called NORA. It’s now being revived at the Cherry Lane Theatre in an English version translated by Frederick J. Marker and Lise-Lone Marker, which has had a number of previous American productions, including its 2006 New York premiere in a three-week run at the ArcLight Theatre. (Several reviews mistakenly claim the present production to be New York’s first.) Local performances of A DOLL’S HOUSE itself, of course, have been abundant, most recently in a lauded 2014 Young Vic production at BAM starring Hattie Morahan. Yet another revival is on deck for the late spring of 2016 at Theater for a New Audience.
Bergman’s version, which strips the play down to its five principal characters, Nora (Jean Lichty) and Torvald Helmer (Todd Gearhart), Dr. Rank (George Morfogen), Christine Linde (Andrea Cirie), and Nils Krogstad (Larry Bull), packs its events into a one-act play running only an hour and a half, thereby focusing on the immediacy of the drama and giving it a bit more bite. It does, however, weaken the pathos of Nora’s famous decision to leave her husband, as we don’t see the kids she’s also abandoning. As directed by Austin Pendleton, the Cherry Lane production succeeds in making the play’s melodramatic machinations clear but suffers from inadequate performances in the leading roles.
This, of course, is the story of Nora, the pretty, young wife of rising banker Torvald, who treats his wife more like a doll than an equal marital partner. Nora finds herself enmeshed in a potentially scandalous situation when her husband, who’s been promoted to bank manager, decides to fire an employee, the unsavory Krogstad. However, Krogstad is the man from whom Nora secretly borrowed a large sum of money, forging the signature of her dying father, in order to pay for a recuperative trip to Italy needed to save the ailing Torvald’s life. Torvald’s always thought the money came from Nora’s father. Now, the widowed Christine Linde, Krogstad’s former lover and Nora’s girlhood friend, arrives, asking Nora to persuade Torvald to give her a job; Torvald agrees, hiring Mrs. Linde to replace Krogstad, who, having discovered the forgery, threatens to expose Nora unless she gets Torvald to retain him.
When the truth of Nora’s actions finally becomes known to Torvald, he blows a gasket, even though what she did saved his life, but he relents when Krogstad has a change of heart. Nora, however, has come to realize how little respect Torvald has for her as a woman and wife, and decides to leave him, something so shocking in its day that Ibsen’s play was even revised in some theatres so that Nora agreed to stay with Torvald. Eventually, Ibsen’s drama became a rallying point for women’ liberation, even though Ibsen said he hadn’t written it for that purpose.

Designer Harry Feiner has provided a simple, rather dark and dimly lit unit setting (Mr. Feiner also did the inconsistent lighting) on the small stage of the Cherry Lane's Studio space. The dreary result includes several pieces of furniture, one of which is a constantly present bed (that tired symbol again). Theresa Squire has provided attractive period costumes, and Ryan Rumery’s sound design contributes nicely to the atmosphere.
Mr. Pendleton’s staging repeats the bothersome convention he used in his recent HAMLET at CSC of having offstage characters remain onstage, sitting silently, not reacting to what’s transpiring in the scene before them, but present as symbolic references to the dramatic context. Strangely, though, Mr. Pendleton allows Dr. Rank, Torvald’s aging (and dying) friend and Nora’s secret admirer, to react with facial expressions to a scene between Torvald and Nora, as if he can actually hear them. There are a number of other directorial quirks, most of which do little to enhance the drama and serve only to draw attention to themselves. These include having Krogstad and Christine play their intimate scene of reconciliation (very well acted, by the way) while standing together on a small, round podium, or using that same podium for Nora’s demonstration of her tarantella dance, for some reason done in a perfunctory, slow-motion way. And then there’s the odd scene of Nora clearly flirting with Dr. Rank, played by the 82-year-old Mr. Morfogen, only for her to burst out indignantly when he shows signs of responding.
The ending, when Nora leaves Torvald, is also a headscratcher. It’s performed in the bedroom, where Torvald is lying naked in bed. His disrobing gets a totally unnecessary scene of its own (despite his period costume, he lacks underwear), and when Nora confronts him to say she’s going bye-bye, the poor actor is forced to wrap the bedclothes around him to perform the scene; I actually felt sorry for him during the curtain calls. Torvald’s nudity, which is mentioned in Bergman’s script, may suggest that his pretenses have been stripped bare, and that he’s powerless before his fully dressed spouse, but it’s awkward and unnecessary. Moreover, as is well known, Nora’s departure through the house’s door was a major moment in late 19th-century world drama, but, as confirmed by the script, there’s no door here, nor is there the sound of a door slamming, which is akin to eliminating Constantine’s offstage shot at the end of THE SEAGULL.You wait for it and when it doesn't happen you wonder if someone goofed.

Mr. Morfogen’s Dr. Rank, while far too old for my taste, once more reveals that actor’s sly intelligence and depth; he wrings every ounce of poignancy and wit from his scenes. Also fine is Ms. Cirie, who brings simple honesty and conviction to Christine. Mr. Bull’s Krogstad has a quiet dignity, reducing the man's creep factor, but his delivery sounds stagy, especially when he artificially emphasizes the “tt” in words like “better.” Mr. Gearhart is a handsome Torvald;, his acting, though, especially at the end, is superficial, constrained, attitudinizing, and passionless.

A reviewer friend writes that Ms. Lichty’s obvious maturity makes Nora’s girlish behavior that much more believable; it only served to irritate me, however, by stressing her shallowness, ignorance, egotism, and phony charm, thereby robbing her of the sympathy Nora should elicit. There’s a calculated quality to the actress’s choices and a lack of organic connection to her role that comes out most clearly in Ms. Lichty’s failure to give any indication throughout of her gradual emergence from the chrysalis of her doll life. When, in what sounds totally out of place in this world, she tells someone she'd like Torvald to "kiss my arse," it fails to register as anything more than a passing joke. Thus Nora's announcement that she’s going to leave Torvald comes out of the blue; her final moment before this scene shows her complacently allowing her husband to unbutton her dress, as, prior to making love, she says, without apparent irony, “And I thank you for your forgiveness.” Ms. Lichty and Pendleton should have found earlier ways to hint at what was coming.