“When You Reach Out and Touch Someone” 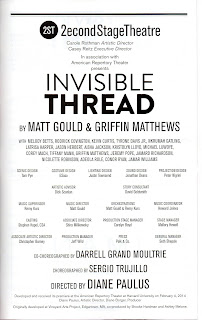 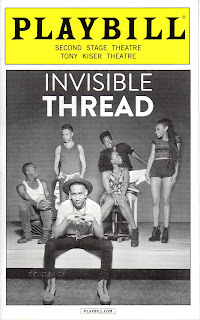 There’s one thing it’s hard to misjudge when you go to the theatre. That’s the spontaneity of an audience’s reaction to something they like, as opposed to the pro forma “everybody rise” of so many standing ovations. When an audience ignites with the enthusiasm of that at Second Stage for the new musical, INVISIBLE THREAD, you might disagree but you can’t ignore it.

The inspirational INVISIBLE THREAD was inspired by the actual experiences of African American actor-singer Griffin Matthews, who wrote the show with his life partner, composer Matt Gould. Griffin, the central character, is played by the actual Griffin, and the plot tells of how, in 2005, he was rejected by the pastor of his church, where he sang tenor in the choir, for being gay. Seeking to lift his spirits, he flew to Uganda where he volunteered to work in a church-run rural compound, building a schoolhouse. As dramatized, with the usual liberties, his story has him discovering that the religious leader, Pastor Jim, is planning to sell the completed project for a profit, which drives Griffin away.

He decides to fill out his brief allotted time in Uganda teaching a band of four impoverished, orphaned teenagers he’s befriended, some of whose parents died of AIDS. To his surprise, the kids think of this American as a white man, a mzungu, a term they aren’t shy using to his face. He sets the school up in an abandoned library. Soon, his white, Jewish boyfriend, called Ryan (Corey Mach) in the show, tired of teaching music to New York kids, joins him, but there are those who don’t welcome these outsiders. Moreover, Griffin and his partner could easily be in danger since Uganda metes out very harsh punishments to gays (something you might have thought the real-life Griffin would have known before going). [Note: a friend has informed me that Uganda's strict anti-gay laws actually weren't passed until 2009.]
The show premiered (as WITNESS UGANDA) in 2014 at the American Repertory Theatre in Cambridge, and already has raised a considerable amount of money to help 10 Ugandan students a year; each of those depicted in the show, by the way—as we learn during the upbeat finale—has succeeded in his or her career choices, one even becoming a doctor. INVISIBLE THREAD illustrates how tangible is the invisible thread that ties one human heart to another, but also illustrates how few lucky children get the help they need in the oppressive hellholes of the world. Much of act two, in fact, concerns Ryan and Griffin’s experiences trying to raise funds for their students—the show itself was born out of their efforts—after they’ve moved them to a boarding school. Thus the evening has a subliminal goal, although no one asks for money on your way out.
As the story develops, historical facts blend with infusions of melodrama, and some of the material goes a bit too far in amping up the emotional dynamics. The book also runs into trouble toward the end when important information is revealed in an extended dialogue scene that jars with the work’s musically oriented style. Lots of joyous, rousing, but not memorably distinctive African-inflected music is heard; there’s also an abundance of narrative-driven numbers in the relatively tuneless, big-voiced style so common nowadays. The ensemble songs stand out, especially “Bela Musana,” a gospel number led by the rafter-shaking voice of Melody Betts as a church lady when Griffin's accepted back into his church. For a rhythm-busting finale, it would be hard to beat the exuberant “Njakuwangula.”
Director Diane Paulus takes brilliant advantage of the music to inject loads of physicality into the production; her vivid staging, combined with the vibrantly enthusiastic choreography of Sergio Trujillo and Darrell Grand Moultrie, often succeeds in making the proceedings literally jump off the stage.
INVISIBLE THREAD is nothing if not energetic, colorful, and spirited while also finding room to be poignant and uplifting. It unfolds on a vividly accented unit set (by Tom Pye) covered with red earth, using flying elements and lots of projections (by Peter Nigrini), including e-mail messages, and a complex lighting scheme (by the always wonderful Justin Townsend). A nine-member orchestra, led by Mr. Gould, sits high overhead at stage right. The African setting gives designer ESosa a good opportunity for some eye-catching costumes.
There are no weak links in the 19-member company, with the slender, boyish Mr. Matthews leading the way with a performance mingling high-octane theatrics with convincing sincerity. As Joy, the cynical woman who runs the compound, Adeola Role shows off a vibrant personality and strong voice. As her intense, troubled brother, Jacob, who becomes closely (but not that closely) attached to Griffin, Michael Luwoye is fine, albeit too mature for the part, The teens that Griffin teaches—Nicolette Robinson as Eden, Kristolyn Lloyd as Grace, Jamar Williams as Ibrahim), and Tyrone Davis, Jr. as Ronny—are all sweet-hearted and earnest, and their infectious presence makes the time fly by.

This new musical has many imperfections, but it will still tie its invisible thread around your heart. 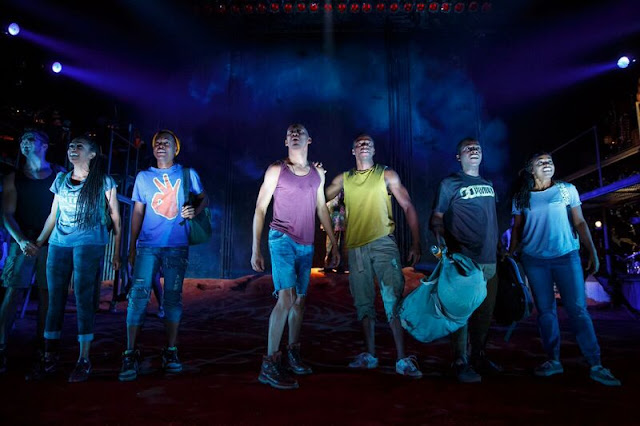