“Nor Any Drop to Drink” 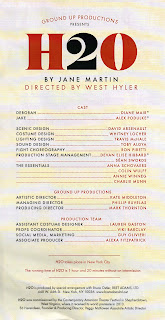 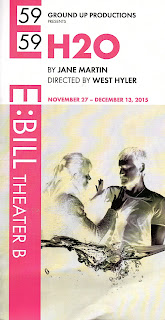 Water makes a couple of appearances in H2O, the uneven, 80-minute dramatic comedy by the award-winning, pseudonymous Jane Martin at 59E59 Theaters, but it’s more likely that the title’s an allusion to the emotional bond between its two actor-characters, a would-be Hamlet and Ophelia. The play originally appeared in 2013 at the Contemporary American Theater Festival in Shepherdstown, West Virginia, and was produced at St. Paul's Gremlin Theatre in 2014.


Jake Abadjian (Alex Podulk) is a movie star whose fame rests on three films he’s made as the superhero Dawnwalker, a role that’s earned him $30 million. He’s a scruffy boozer who was a sometime musician in L.A. when he caught an agent’s eye and wound up being cast as the superhero “who never speaks.” But Jake’s paying the price by finding the meaninglessness in an existence where he can have whomever and whatever he desires. Despite his vast inexperience, he’s decided to seek that missing meaning by playing Hamlet on Broadway, supported by a cast of mostly “British actor-elephants,” as he terms them. If you can digest the idea of an untrained movie star who never spoke a word on screen as a major production's Prince of Denmark, I congratulate you on your cast iron stomach.

A struggling actress named Deborah Elling (Diane Mair), from Fayette, Missouri, shows up to audition for Ophelia (the director and producer have turned her casting over to  the fledgling Shakespearean, which also requires some sturdy internal plumbing to accept). Arriving just after the depressed Jake has slashed his wrists, she saves him, thus initiating the painful relationship that constitutes the plot.

Deborah’s a 26-year-old fundamentalist (“Renewalist”) Christian virgin; she tells us (the play has lots of direct address) that, while she was reading a first folio at the New York Public Library, she heard Jesus informing her that acting was “her service.” “I won’t do plays that don’t enable God’s handiwork,” she declares. In her eyes, Shakespeare proves the existence of God. Jake, for his part, is a snarky skeptic who never misses a chance to get off a crack at Jesus’ expense. Intimidated by Hamlet’s language and the more experienced cast members, he thinks he needs Deborah’s help.
The play depicts the emotional and spiritual conflict between the cynical, rude, foul-mouthed, self-hating Jake and the artistically aspiring, profanity-hating, sexually unavailable, faith-driven Deborah, with the fate of Jake’s soul lying somewhere in the balance. Given the nature of their relationship and that of the characters they’ll embody in HAMLET, it’s clear that the play wishes to conflate their offstage lives with those in Shakespeare’s tragedy. Thus, despite several good laughs, H2O—which includes scenes of blood and attempted rape—comes down much harder on the dramatic than the comic side of the equation.
Set on a stage bare except for a door on rollers and a few pieces of furniture (David Arsenault is the designer), the play moves swiftly under West Hyler’s direction, using a quartet of black-garbed stage hands—the Essentials (Anna Schovaers, Colin Wulff, Annie Winneg, and Charlie Munn)—to rearrange the set pieces, deliver and retrieve props, and handle Ms. Mair’s onstage costume changes, which often reveal her in her bra and panties. The costumes, which include a lovely blue lace evening gown, are by Whitney Locher and the effective lighting by Travis McHale.
Ms. Mair and Mr. Podulke come across as earnest, hard-working actors, but neither transcends the often forced situations and dialogue to make us care for their unsympathetic characters. Deborah recites pious monologues about religion that reek with divinity school locutions, including words like “ontological” and “teleological,” while Jake riffs on the meaningless of acting and even offers a diatribe on Hamlet that may send some Shakespeare addicts bonkers with its questionable critique. Jake (who often speaks through gritted teeth) is intended to be a flop as Hamlet, so Mr. Podulke’s lackluster reading of the Prince’s lines can be excused, but Ms. Mair’s Deborah doesn’t make up for his lapses when she recites her own Bardic dialogue.
There are a few splashes of interest in H2O, and the actors sometimes generate a bit of heat, but the play itself never really comes to a boil.
OTHER VIEWPOINTS:
Show-Score
H2O
59E59 Theaters/Theater B
59 East Fifty-Ninth Street, NYC
Through December 13