"At the Old Balls Game" 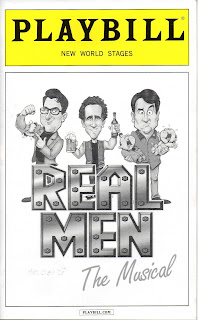 Whether you’re gay, straight, trans, or any other color on the gender rainbow, the New York theatre has a show for you. (There’s even a piece called SEX TIPS FOR STRAIGHT WOMEN FROM A GAY MAN.) At the moment, New World Stages is braying to the testosterone-heavy segment of the spectrum with, in one corner, MEN ARE FROM MARS, WOMEN ARE FROM VENUS, and, in another, REAL MEN: THE MUSICAL. Both seek to affirm all the conventional shibboleths about what it is to belong to that beleaguered, outdated, and henpecked demographic called the straight man (and, it seems, only the white subsection of that diverse population).
Although it calls itself a musical, REAL MEN—briskly directed by David Arisco—is really a modestly raunchy revue, with three talented, middle-aged performers appearing in a sequence of brief skits and over two dozen songs in a variety of show tune styles (no eleven o’clock power ballads, though). Two of those performers, Nick Santa Maria and Paul Louis, wrote the mostly tuneful, sporadically witty book, music, and lyrics; keyboardist Martin Landry and percussionist Brian Radock supply the accompaniment. Originally called REAL MEN SING SHOW TUNES AND PLAY WITH PUPPETS, it premiered at the Actors Playhouse in Coral Gables, Florida, in 2012, and was subsequently seen in L.A. It was shown in July at the New York Music Theatre Festival, where it was titled REAL MEN: A MUSICAL FOR GUYS AND THE WOMEN WHO PUT UP WITH THEM, and it’s the first of this year’s NYMF shows to get a regular New York run.
Working against a spangly backdrop designed by Gene Seyffer and lit by Patrick Tennent, Mr.  Santa Maria, Mr. Louis, and the third member of their trio, Stephen G. Anthony, sing nicely and demonstrate their comic chops in what’s structured as a 12-step program given to an insecure guy (Mr. Anthony) by a puppet-wielding shrink (Mr. Louis) about how to find confidence in his shrinking manhood: for example, “Step Four: Appreciate Your Woman,” “Step Six: Spend Quality Time with Your Loved One,” “Step Nine: Mature Gracefully.” Every so often, a preacher (or three) appears at a pulpit to instruct us about the precepts of manhood taken, not from the Bible but from The Book of More Men. For a sampling, let’s take the first five:

We believe Spring cleaning can be put off till Winter, . . . of the following year
We know about batteries.
Our T-shirts can be worn two days in a row, . . . three if you don't sweat much.
We think dog slobber is a good thing.
We like being sexually harassed

Ba da bum.
Much of this is clever and funny, but much is not; the humor’s original only in spots, its appeal depending heavily on the performative charms of the stars (who harmonize nicely) and the catchiness of several tunes. (I admit to laughing louder at Jason Alexander’s online promo video than at anything in the show itself.) If you think a sketch in which an actor dances about in a penis costume that flops over when he encounters his wife in housecoat, curlers, and rolling pin might roll you in the aisles, REAL MEN has a ticket it wants to sell you. Genital humor, of course, isn’t limited to this bit: there’s even a routine called “Look Straight Ahead” about urinal etiquette.
Several skits click, like the one called “Guy Talk,” in which Mr. Anthony uses doubletalk to “bullshit” his way through a beer-drinking session, impressing his bar partners with his knowledge of baseball, cars, and refrigerator repair. Among the more risible songs is “I’m Not,” in which Mr. Santa Maria checks off a list of all the stereotypically gay things he likes while dissuading us from thinking him anything but straight. One verse goes:

MY BED SHEETS ARE CLEAN
MY HYGIENE IS KEMPT
A SAD MOVIE SCENE CAN MAKE ME FERKLEMPT
(tissue box appears)
BUT I'M NOT GAY
It’s not all music and yocks, though, as the writers now and then offer snatches of sentiment to warm your heart, with material that touches on dads and babies. The trio’s very good at varying their personas with minimal changes of jackets and hats (good choices by costumer Ellis Tillman); each gets to use Muppet-like puppets (designed by Mr. Louis and Mr. Tillman), and there are sequences, reminscent of the great "Triplets" number in the Fred Astaire-Nanette Fabray movie, THE BAND WAGON, where their lower halves are hidden behind a platform so someone else’s hands can serve as their tiny feet (or is the other way around?). In “Prairie Men,” for example, they’re cowboys from the waist up, and ballet dancers from the tutu down.
If you’re thinking women might not go for this show, think again. My guest was a woman, and she liked it even more than I, while the lady sitting on my other side couldn’t stop shaking her head up and down and chuckling audibly. In fact, maybe you have to be a real woman to get the most out of REAL MEN.