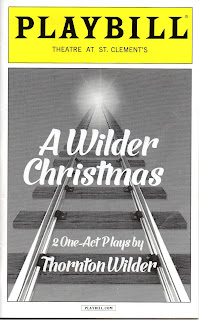 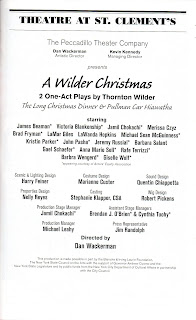 It probably can’t be proved, but it wouldn’t be too much of a stretch to suggest that the most beloved and frequently performed American play is Thornton Wilder’s OUR TOWN (1938). Wilder's (1898-1975) small number of full-length plays includes two other still important works, THE SKIN OF OUR TEETH (1942) and THE MATCHMAKER (1954; based on a 19th-century Austrian farce and itself the source for HELLO, DOLLY!). He also wrote many one-acts, several being among the most often produced in educational and amateur theatre circles. Two of the best—“The Long Christmas Dinner” and “Pullman Car Hiawatha”—are currently being pleasantly revived at the Theatre at St. Clement’s, nicely directed by Dan Wackerman for the Peccadillo Theater Company.


Both plays represent Wilder’s preoccupation with using experimental theatrical techniques to express cosmic ideas in an emotionally moving yet entertaining and accessible form. “The Long Christmas Dinner” (1931) employs a dramatic device then so unique that it inspired Orson Welles to use it for the breakfast scene between Kane and Emily in CITIZEN KANE, where the history of their nine-year marriage is covered in a striking montage.
Wilder’s gently humorous, mildly nostalgic, family drama—which has also been made into an opera by Paul Hindemith (1961)—begins with the Bayard family seated around a dining table on Christmas Day, 1840; during its 45 minutes it traverses 90 years in four generations of the family’s life. At the beginning, the house is new and the aged, wheelchair-bound Mother Bayard (Victoria Blankenship) can recall when Indians were still nearby; toward the end, industrial development soils the house with soot. Alcoholism, illness, childbirth, mortality, travel, moving away, filial rebellion, war, and so on intrude. Time goes too fast or too slow, depending on one’s perspective.
Using naturalistic illusion-shattering conventions derived from Chinese traditional theatre, the setting (designed by Harry Feiner) is little more than a bare stage on which the table is handsomely set for Christmas dinner; a portal at stage right is adorned with flowers and fruits; another, at left, which Wilder describes as “hung with black velvet,” is shown here with withered branches. That on the left represents birth, the other death. Wilder calls for a large turkey to be on the table and for the utensils to be imaginary, but this production’s turkey is imaginary and the utensils are not.

As the years pass, the actors freeze to indicate the passage of time, and family members whom we’ve seen getting older pass on through the portal of death (with a couple of returns), balanced by newborns wheeled on in carriages from the portal of birth. Anyone who’s sat at the same table for family gatherings over many years will instantly feel pangs of joy and sadness at how well Wilder captures the sense of time passing, with memories of loved ones now gone and of pleasure (to begin with, at least) at new ones arriving through birth, romance, marriage, and family connection.

Working in swift, brief strokes, Wilder introduces just enough exposition so we have a sense of who these people are, what they aspire to, what’s ailing them, how they’re aging, and a bit of what’s happening in the world outside. A noticeable theme is the friction between fathers and sons—succession in the family firm is a constant—as the generations evolve, with the biggest emotional climax being a quarrel between a misbehaving son, Roderick (Rafe Terrizzi), and his angry father, Charles (John Pasha).

The 12-member ensemble is uniform, with everyone offering firmly competent performances. Those who grow old before our eyes manage the feat with a minimum of fuss, even abandoning the use of wigs that Wilder asks them to “adjust upon their heads at the indicated moments.”

“Pullman Car Hiawatha” (1931) is even more unconventional; it offers a denser philosophical view of life and time’s passage. Using 16 actors, it prefigures OUR TOWN in a number of ways, using a genial, dapper Stage Manager (Michael Sean McGuinness)—dressed by costumer Marianne Custer in a double-breasted suit and red bowtie—to supervise the telling of a story set upon a Pullman sleeping car named Hiawatha wending its way from New York to Chicago in 1930. As the train moves past various towns, including Grover’s Corners, Ohio (OUR TOWN’s Grover’s Corners is in New Hampshire), its progress is a metaphor for the movement of human life. Similar themes, touching on life, death, and the position of humanity in comparison to the universe, are shared between “Pullman Car Hiawatha” and Wilder’s later masterpiece.

Mr. Feiner’s set—which departs from Wilder’s instructions that the passenger’s spaces be drawn by the Stage Manager in chalk on the stage floor, with the actors then bringing on chairs to sit and sleep on—contains a simplified row of lower berths running parallel to the audience on a raised, upstage platform. Downstage sections—separated by an aisle from the berths—represent the train’s regular compartments.

The characters, some unnamed, are allegorical but recognizable representations of a cross-section of everyday humanity. Those downstage include a young wife, Harriet (Anna Marie Sell), her husband, Philip (Mr. Pasha), an Insane Woman (Giselle Wolf), and her two, white-garbed attendants (Rafe Terrizzi and Kristin Parker). In separate berths upstage are two engineers, Bill (Jeremy Russial) and Fred (Brad Fryman); a doctor (James Beaman); and an Amiable Lady (Gael Schaefer). There’s also a black porter (Lamar Giles). Wilder’s unconventional dramaturgy allows us at one point to listen to the private thoughts of the characters, each with his or her own petty preoccupations.

Downstage, Harriet isn’t well and the Insane Woman is acting up. The doctor is summoned for Harriet, but it’s too late to save her. With Harriet’s death, the play moves onto a larger plane. From the microcosm of life seen on the train, we’re asked by the God-like Stage Manager to contemplate the macrocosm of the universe outside: “So much for the inside of the car. That’ll be enough of that for the present. Now for its position geographically, meteorically, astronomically, theologically considered.” Members of the audience (in this production, but not the script) are asked to read lines from famous writings. Three “beautiful girls” (Merissa Czyz, Lawanda Hopkins, and Barbara Salant) playing the Hours—a concept to which Wilder returns in THE SKIN OF OUR TEETH—appear in an aisle, contemplating time; each has a historical, philosophical analogue, St. Augustine among them.
After more such metaphysical and even theological occurrences, the upstage curtain parts and Harriet is led up heavenly stairs by an archangel (Mr. Giles); Wilder’s two archangels are reduced here to one. Harriet recites a speech reminiscent of the famous one Emily in OUR TOWN gives when she briefly returns to earth. The train arrives at Chicago, the passengers depart, and three scrubwomen mop the floor.
This is a respectable staging of a play whose metaphysical ruminations, theatrical as they are, aren’t always easy to grasp; it’s nonetheless so imaginatively original that it holds your interest even when you’re not quite sure of what you’re seeing and hearing. Mr. Feiner’s lighting creates several stunning visuals, one when the archangel, dressed in a formal white suit (blue serge in the text), climbs the steps with Harriet, and another when each of the characters is highlighted by a pin spot as they pose in silhouette. A fine sound design by Quentin Chiappetta provides a perfect auditory background. Ms. Custer’s period costumes add immeasurably to the experience.

It’s unusual for an Off-Broadway company to employ such a large cast, so in that alone A WILDER CHRISTMAS is unusual. The acting in “Pullman Car Hiawatha” is as smoothly effective as that in the first play, although there are several potent moments—one involving Ms. Wolf’s Insane Woman—but it’s the way the gears mesh rather than any specific performance that keeps this train on track.

Despite the evening’s title being wreathed in the holiday spirit, these plays are more contemplative than joyful, but they do offer as much rich food for thought as whatever you’ll be eating at Christmas dinner will for your stomach.