“The Men from Plaid” 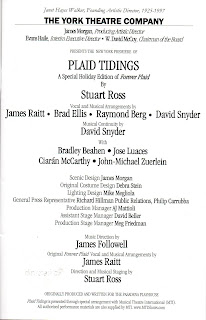 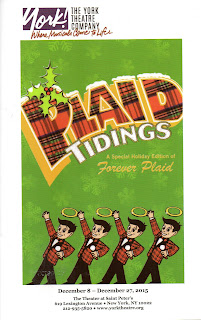 Tis the season to be schmaltzy, as anyone visiting PLAID TIDINGS, the entertaining, nostalgia-laden Christmas revue making its New York debut, can attest. The show, which premiered at the Pasadena Playhouse in 2001, takes theatregoers, especially those of a certain age, on a trip back to the days when “PC” stood for Perry Como (or “Perry Christmas”), whom even Donald Trump probably loved. The show's a holiday spinoff from another Off-Broadway revue, Stuart Ross’s popular FOREVER PLAID, which debuted in 1990, and was built around four young semi-professional singers calling themselves “Forever Plaid” who are devoted to smooth harmonizing in the 1950s tradition of “guy groups” like the Four Aces, the Four Lads, the Hi-Los, and the Four Freshmen.

The premise of the original show is that the fellows, clean-cut high school buddies, were headed for their big break on February 9, 1964—at an Airport Hilton cocktail lounge—when they were killed in a collision with a bus carrying Catholic high school girls to see the Beatles on “The Ed Sullivan Show." They get the chance to return to earth so they can perform the show they never got to do, covers of pop standards of the day that were on the verge of obsolescence with the rapid rise of rock ‘n roll.

PLAID TIDINGS uses the same idea, but the singers, Sparky (Jose Luaces), Smudge (John-Michael Zuerlein), Jinx (Ciaran McCarthy), and Frankie (Bradley Beahen), now return—cue the lightning and thunder—during the holiday season. They’ve been sent back for some cosmic gobbledygook reason, and give a two-act show, wearing plaid tuxes and cummerbunds in act one and cherry red cardigans (with plaid ties) in act two. One guy suffers from asthma, another from nosebleeds, and another from stuttering.

The slightly overstuffed two-hour show is packed with tasty bonbons in the form of expertly performed songs and clever musical staging. The comic shtick is hit or miss, though, and the corn is as high as an elephant's eye, The group is supposedly awkward and prone to mishaps, emphasized by business like having one or the other pretend to be out of sync. With the same music playing in every store and elevator these days, the music holds few surprises; nonetheless, it’s well enough done that it really doesn’t matter.
At first, the Plaids sing songs like “Stranger in Paradise,” “Sh-Boom,” (wittily performed with the use of long-handled plumber’s helpers), “Besame Mucho,” and “Kiss of Fire”; when the Christmas spirit starts to move them we hear “I Saw Mommy Kissing Santa Claus,” “Hark the Herald Angels Sing,” and “It’s the Most Wonderful Time of the Year.” But they continue to make side trips into non-holiday songs before they finally get the heavenly message (from Rosemary Clooney) about what they should be singing, and the Yuletide gates open all the way, starting with “The Christmas Song.” Before act one ends, there's an audience sing-along of the calypso“Mathilda” (with lyrics referring to Mathilda’s taking “me money” to “go Christmas shopping”). For Chanukah celebrants, “The Dreidel Song” gets a spin.
Act two’s many nicely wrapped presents include, among others, “Cool Yule,” “Rudolph the Red-Nosed Reindeer” (given a hilarious a capella rendition by Frankie during which he makes an impassioned spoken plea on behalf of the beleaguered Rudolph), a hip-hop “Twas the Night Before Christmas,” “Let it Snow,” “Carol of the Bells” (a bell-ringing routine in which an audience member participates), “Mr. Sandman” (changed to "Mr. Santa," also on the bells), “It’s Beginning to Look a Lot Like Christmas” (sung as backup to a video clip of Perry Como from one of his Christmas specials), “Jingle Bells,” “Have Yourself a Merry Little Christmas,” and so on. The evening’s showstopper isn’t a song, though, but a condensed rendition of “The Ed Sullivan Show” referencing as many of the acts that used to appear there as there are angels on the head of a pin (yes, Liberace, Alvin and the Chipmunks, and Señor Wences are there!).

All the technical and design elements are in tune, including James Morgan’s cabaret setting, and Mike Megliola’s Christmas-accented lighting. Mr. Luaces, Mr. Zuerlein, Mr. McCarthy, and Mr. Beahan move well, are funny enough, and capture the still wonderful period sound. If you’re thinking about a reasonably priced holiday gift for your theatre-loving friends, this musically lighthearted, sentimental throwback, silly and old-fashioned as some of it is, would be a great choice. You might even want to put PLAID TIDINGS on your own wish list.