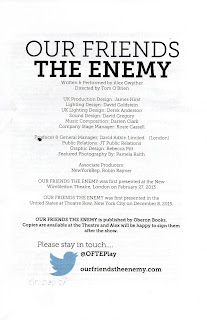 Imagine. A time precisely 101 years ago when two enemy armies sharing common religious beliefs were able—in the midst of one of history’s most horrendously brutal wars—to briefly put down their arms and celebrate their mutual humanity and faith, even playing football (soccer), exchanging gifts, singing carols, and donning one another’s helmets, before resuming the slaughter. Something like this—with varying degrees of fraternization or military activity (including burials and prisoner swaps) at different locales—actually happened in France during one of the most unusual moments of World War I’s carnage, only five months after hostilities began.

This moment, when England’s Tommys and Germany’s Jerrys faced each other at Christmastime in freezing, wet, and muddy trenches across a couple of hundred yards on the Western Front, is the subject of British actor-playwright Alex Gwyther’s somber but disappointingly undramatic solo play, OUR FRIENDS, THE ENEMY, starring Mr. Gwyther under the direction of Tom O’Brien. The piece comes to Theatre Row’s Lion Theatre after a well-received 2013 run at London’s Wimbledon Studio Theatre, on tour, and at the Edinburgh Fringe Festival..


It was December 1914 when—at one frontline site after another—the spirit of the season spontaneously inspired what came to be called the Christmas Truce, a momentary (and unofficial) cessation of hostilities, created, not by the warring commanders or their governments, but by the men themselves (the Germans are said to have initiated it). Picture it: two dirty, cold, hungry, homesick armies—the wounded, dying, and dead nearby—laying aside their weapons by common consent to fraternize in no-man’s land during a momentary peace.

In a program note, Mr. Gwyther says he wrote the play because he felt “more people had to know about the Truce.” One might think, therefore, that he’s uncovered a little-known story begging for dramatization. In fact, whether you’ve heard of it or not, the Christmas Truce is a quite well-known part of the Great War’s lore and is deeply embedded in the cultural mythology associated with that conflict, including popular songs, movies, TV programs, and plays (one example of which has been performed at Minneapolis’s Pantages Theatre annually since 2008).
OUR FRIENDS, THE ENEMY takes place on a mostly bare black stage covered with earth,  and using a minimum of props (whatever’s covering the ground can’t be seen from the theatre’s rear, where I was seated). Lighting designer David Goldstein keeps the atmospherics suitably moody and grim, often isolating Mr. Gwyther with gloomy shadows from below, and Darren Clark provides a musical background of gentle piano tinkling that, at first, sounds like someone’s IPhone going off. During the preshow moments, Mr. Gwyther, a good-looking young man, dressed in a filthy uniform and a soft military cap (no helmet?), busies himself with his rifle and other mundane things, but when the piece proper begins—and when it ends—he’s got his hands behind his head, praying, as if waiting to be shot.
He’s Private James Boyce, 1st Queens Regiment, Surrey, and he soon begins recounting his experiences directly to us (who we are is not mentioned), occasionally citing specific dates (beginning December 19, 1914, and then shifting to December 24) to mark the way, as if the words come from a diary. He speaks of his soldier friend, George, of their casual conversations, of his rations, his hardships, the preparations for a coming attack, and so on, giving us a sense of what the British cannon fodder were experiencing in the trenches on a day to day basis during the first Christmas season of the war. He also tells us of similar concerns on the German side, “a grenade’s throw away,” thus giving him a narrative omniscience and diminishing the idea that we’re hearing the firsthand account of an actual person. This transfer from the personal to the universal goes back and forth throughout.

As the narrative continues, we learn of his encounter with German soldiers while foraging at a barn, of his inability to shoot an enemy counterpart in cold blood, and of their agreement to continue such secret meetings. He describes how the Brits and Germans are tentatively celebrating the holiday, moving the story from his own location to what was happening at the same time at battlegrounds elsewhere on the front, something he could, of course, have had no idea of at the time. Meanwhile, the bombs and gunfire (none of which are audible) continue to rain death on both sides. Gifts arrive on Christmas day, the enemies cautiously come together, cigarettes are shared along with gripes about the hellish conditions, various amusements help pass the time, and corpses are laid to rest, but the moment passes, and the apocalypse returns
.
The story is profoundly powerful, but its heartbeat rests in incidental moments, not in a cumulatively engrossing drama; instead, an elegiac mood takes precedence over dramatic development. Sincere as are Mr. Gwyther’s intentions, they never coalesce into an emotional fireball. His soft-voiced delivery, except for a few moments of heightened feeling, has a monotonous sameness that, even for a performance only 55 minutes long, borders on the tedious. The soldiers Mr. Gwyther honors endured godforsaken agonies we can only guess at, but OUR FRIENDS, THE ENEMY barely conveys either their discomforts or the sharply contrasting comfort that the Christmas Truce surely must have brought them.