“Sticks It to the Man” 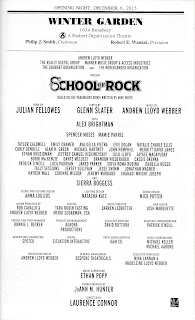 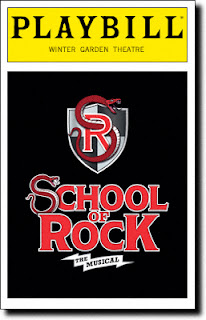 Back in 2003 actor-musician Jack Black created what is still his most iconic character, the schlubby, chubby, wannabe rock musician Dewey Finn, in Richard Linklater’s movie SCHOOL OF ROCK. Dewey, you’ll recall, becomes a substitute teacher at an elite prep school and leads his brilliantly talented grade school kids to compete at the Battle of the Bands. So popular was the film—it made more money than any movie musical in history until bypassed this year by PITCH PERFECT 2—that it was only a matter of time before someone put it on the Main Stem. (You’re thinking whatever happened to THE SOUND OF MUSIC and MY FAIR LADY?)
While SCHOOL OF ROCK isn't a conventional movie musical, in which the songs are integral to the narrative, that—at least, in part—is what it’s become in its Broadway adaptation (a world premiere), with a company of 35 performers singing music (much of it uninspired, high-decibel hard rock) by Andrew Lloyd Webber (PHANTOM OF THE OPERA, yes, but also JESUS CHRIST SUPERSTAR) and lyrics by Glenn Slater (SISTER ACT, THE LITTLE MERMAID). The book, which follows the movie’s plot while offering some additional material—the strained relationships between the kids and their fathers (“If Only You Would Listen”), and a romance between the leads—is by Julian Fellowes (DOWNTON ABBEY: surprise!), and the enthusiastic direction is by Laurence Connor (LES MISÉRABLES). With such a powerful creative team, a show with sky-high name recognition, a company of insanely talented boys and girls, and a promising new star, its success is practically guaranteed, no matter what its flaws (and they're undeniable). Judging by the many youngsters packed into the Winter Garden at the Saturday matinee I attended, this one is bound for family hitdom, and may even inspire a new generation of hard-rockin’ headbangers.

Singer-guitarist Dewey (Alex Brightman) is fired from his heavy metal band, No Vacancy, for drawing too much attention to himself. Broke, and needing money to pay his rent to his best friend, Ned Schneebly (Spencer Moses, amusingly tall and thin as a straw), and his henpecking girlfriend, Patty (Mamie Parris, very good), he secretly takes a substitute teaching job intended for Ned at Horace Green Prep School. At this hallowed institution, where parents pay $50,000 a year (updated from $15,000 in the film) for a year’s tuition, he encounters the uptight young principal, Rosalie Mullins (Sierra Boggess in the Joan Cusack role). As in the film, Dewey’s demeanor is the exact opposite of what’s expected: he’s slovenly, unpunctual, snarky, lazy, and totally anti-establishment. His mantra of “stick it to the man” becomes the show’s theme and one of its best songs, reprised for the splashy finale.
Once ensconced in his fifth-grade classroom, the hungover Dewey does everything he can to ignore the anxious preppies, just hoping to make it through the day, but when he discovers that the kids have musical talent, the rock music-obsessed Dewey schemes to train them to compete in the Battle of the Bands under the name School of Rock, with him as the front man. The kids, needing the attention they’re missing at home, latch on enthusiastically, and Dewey makes the most of each one’s special talents (“You’re in the Band”), including the officious little genius named Summer (Isabella Russo, as smart as she’s cute), who’s assigned the role of band manager. The withdrawn Tomika (Bobbi MacKenzie), adopted daughter of two gay men, is bypassed until she bursts out with an awesome R&B cover of “Amazing Grace.”
Of course, it’s all a fairy tale. How else could you believe a loose cannon like Dewey passing as a teacher in an elite school, and secretly forming a sensational band out of a random group of fifth-graders who just happen to be virtuosi musicians and singers? Or accept the prince of grunge being the object of the prim and proper Rosalie’s affections after she downs a single drink and learns that Dewey’s as crazy as she about Stevie Nicks (whose “Edge of Seventeen” he plays on the jukebox)? Nonetheless, while the show’s on you believe and you accept because it’s presented with a just enough skill and charm to make it irresistible. In fact, you’ll probably even wipe away a happy tear or two.
The vocally gifted Ms. Boggess delivers, showing off both operatic chops (“Queen of the Night”) as well as her Broadway belting with the show’s big ballad, “Where Did the Rock Go?”; I wish, though, her Rosalie were more a character than an outline. Mr. Brightman is sure to get raves—and award nominations—for his singing, guitar playing, clowning, and manic energy, but what he offers is essentially a terrific replication of Jack Black’s unforgettable portrayal. There are sensational riffs from the kids, in particular, the insecure Zack (Brandon Niederauer) on electric guitar, the cool Freddy (Dante Melucci) on drums, the lip-puckering Katie (Evie Dolan) on bass, and the nerdy classical pianist Lawrence (Jared Parker) on the keyboard. A large supporting cast smoothly covers the ensemble roles of teachers, parents, and musicians.
Anna Louizos provides not only great character-defining costumes but a set using elaborate sliding and flying panels for the 20 scenes, providing solid-looking school interiors, among other locales; the visuals are abetted perfectly by Natasha Katz’s lighting wizardry, including rock show razzmatazz at the end.
SCHOOL OF ROCK teaches us that it’s sometimes okay to break the rules and stick it to the man, but also that Broadway (presently graced with seven shows featuring child actors) has a bottomless pit of extraordinarily talented kids who can do practically anything the stage requires, including making a B-minus show into an A-minus one.