"Much Ado about Mugging" 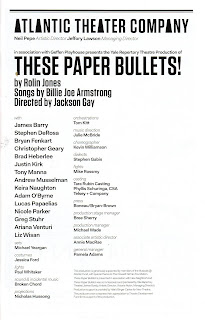 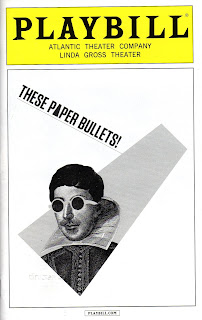 For my review of THESE PAPER BULLETS!, please click on THE BROADWAY BLOG.

Dear friends:
This is my last review of 2015. I hope to be back in 2016, but, for now, I want to wish you all a Happy New Year and to thank you for reading my posts. I reviewed 196 shows in 2015, and would have covered even more had I been able to wrangle press seats to them. But that's another story.

I recently was asked to pick my ten best shows of the year for inclusion on the Theater Pizzazz website. Here’s what I came up with.

Obviously, they’re not all great plays or musicals, but each one affected me so memorably--by some combination of its thoughtfulness, humor, music, production, performances, or emotional values--that just seeing its title was enough to demand its inclusion.

I originally included the Broadway production of HAND TO GOD but removed it after seeing THE COLOR PURPLE. HAND TO GOD was one of my choices when it was premiered Off Broadway last year, so it had to go when I was bowled over by THE COLOR PURPLE. If you’re wondering why such highly praised shows as THE KING AND I, THE HUMANS, A VIEW FROM THE BRIDGE, and FIDDLER ON THE ROOF aren’t represented, it’s because press seats were strictly limited. I also tried to keep several Off Broadway shows on the list, which is why, for example, SCHOOL OF ROCK isn't listed.

Thanks again for your support, and a special shout out to those who’ve signed up to follow me on Show-Score.com!

Please continue to check THEATER PIZZAZZ and THE BROADWAY BLOG, where you'll find excellent coverage of the New York theatre scene by a number of other writers.