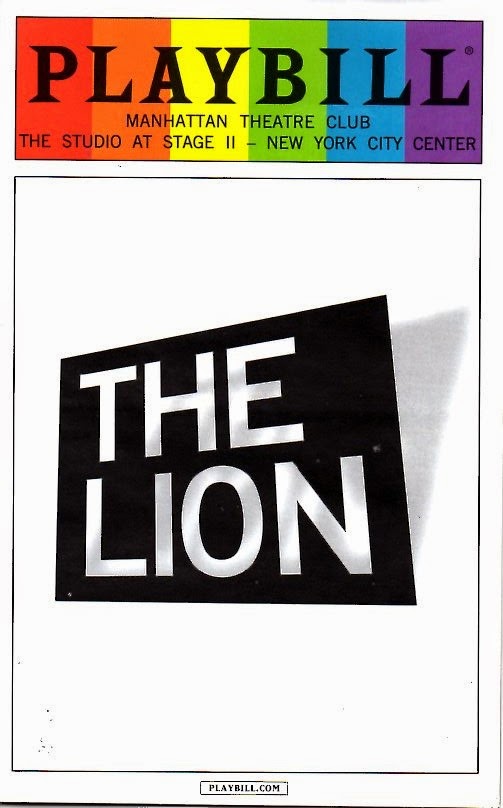 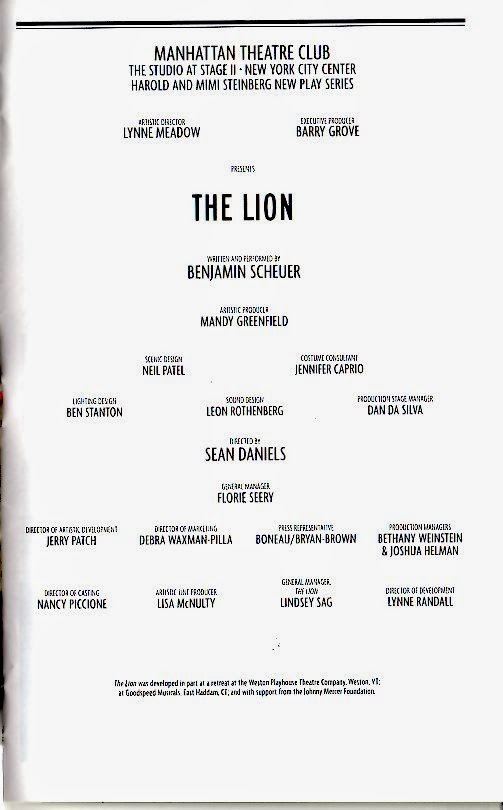 The setting (designed by Neil Patel) at City Center II is a semicircular upstage wall, painted a mottled tan and brown, vaguely suggestive of a recording studio or cabaret stage, with a single door, three chairs, half a dozen guitars of varying sizes and styles (mostly acoustic with one electric) standing on their bases, and several mikes. During the ensuing performance, Ben Stanton’s lighting will play exquisitely across the space, following its ever-changing emotional arc.
Through the door enters a handsome young man—his chiseled features convey something of a cross between Colin Firth and Jeremy Renner—in his 30s, with a mane of wavy, blondish brown hair, wearing a bluish-gray, well-tailored suit, with a crisp white shirt and tie. Later, he’ll remove his jacket to reveal a classy set of suspenders. This is Benjamin Scheuer, songwriter, composer, guitarist extraordinaire, and writer of THE LION, presented by the Manhattan Theatre Club. Under Sean Daniels’s flawless direction, he’ll hold you in his thrall for the next 70 minutes as he sings and talk-sings about his life. 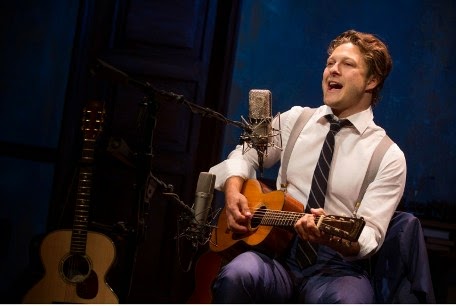 
Speaking the lines of all the characters, he focuses mainly on his relationship with his polymath of a dad, Rick, an economist, lawyer, mathematician, and gifted guitarist. Ben, whose mom is English, tells of his two younger brothers, and how he and they learned music from their beloved dad. A wonderful tune about his father’s making him a toy banjo out of a cookie tin is heard early on and late. But as Ben grew into his teens, his father, to whom he was attached mainly through the music they shared, began to treat him more harshly than his boyhood misdemeanors warranted; his father, who had began having serious headaches, died of a brain hemorrhage when Ben was fourteen. The connection between his father’s ailments—especially the depression of which Ben learns much later—and his treatment of his son is never made explicitly, but is easy to imagine. The theme tying Ben’s story together is his constant preoccupation with trying to come to terms with his love-hate relationship with Rick, a man so admired and loved by many people in prestigious positions that a book of encomiums about him was produced. Ben had great difficulty reconciling the man others knew from the father he remembered. 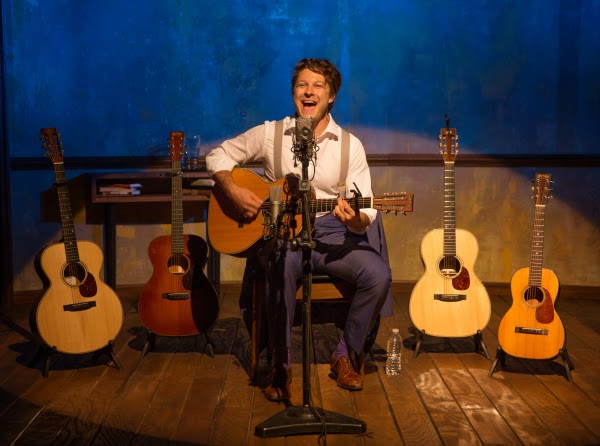 Benjamin Scheuer. Photo: Matthew Murphy.
Ben, his mother, and brothers moved to England, but Ben eventually returned to New York and became a rock musician, playing at CBGB, among other venues. He tells of his love affair with Julie, which ended when she decided to travel the world, and then of the central and defining development in his life thus far, bone cancer, the suffering this produced, and his ultimate cure. A song about how one grows by weathering life’s storms emphasizes a principal dramatic theme. Always anxious to play music like his dad, he eventually learns to play music like himself. By this time, the tie is off, the suspenders lowered, his socks removed, and the man Ben is shines through.


Mr. Scheuer recounts the emotionally fraught tales of his familial and romantic loves while seated in one or the other of the room’s chairs, always with a guitar on his lap, through his original music and lyrics, some rhymed and some not. Apart from the loud, insistent chords of defiant rock on his electric guitar, played during his rock musician phase, Mr. Scheuer’s folk/folk-rock music has an appealingly direct, storytelling quality, the melodies and rhythms usually being subordinate to or  supportive of the  words, which he delivers with easy charm and poignantly affecting richness. He isn’t equipped with a superbly musical voice, but with one that is perfectly attuned to the kind of personal and directly touching music he composes. There’s a quality of naturalness, ease, and niceness about him that makes you feel that, after little more than an hour in his company, you not only know but trust him.


With his charismatic looks, sweetheart of a smile, perfect timing, and accessible feelings, Mr. Scheuer could easily be a movie star. Who knows, perhaps this lion will roar one day from the silver screen. In his sensitively conceived new solo musical, THE LION, Ben Scheuer is one big cat that can truly sing, “within my gentle paws I’ve got devastating claws.” Grrrrr.
Posted by Samuel L. Leiter at 2:01 PM