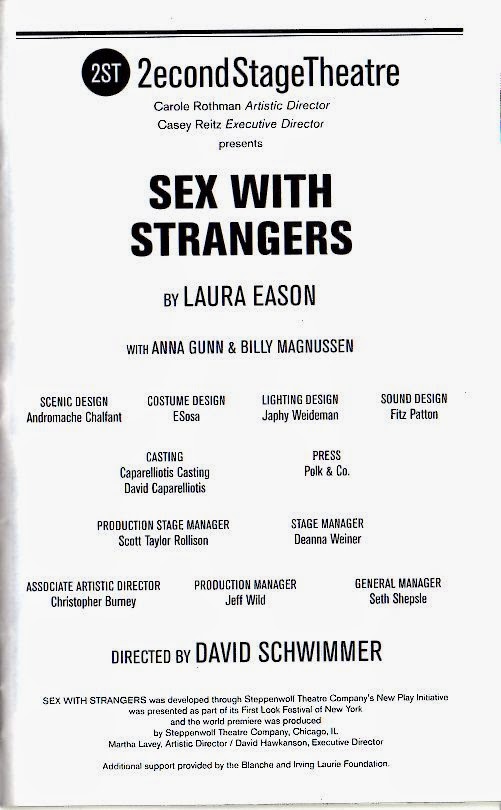 There are essentially two kinds of plays (or films) about writers, biographical ones that tell the stories of actual authors, like Shakespeare, Truman Capote, or Mark Twain, and those about fictional writers, like DEATHTRAP or THE SEAGULL. In the former, you at least have the works of the authors to refer to when the writing is discussed, but with fictional authors you have to take the playwright’s word for it when characters offer critical assessments. The latter is the case with SEX WITH STRANGERS, the terrifically written and acted two-act, two-character comedy-drama at Second Stage (originally produced in 2011 at Chicago's Steppenwolf Theatre). During much of it we contemplate the work of two diametrically opposed writers without ourselves actually reading or even hearing a word of what they’ve written. Ms. Eason’s often hilarious piece depicts a sizzling relationship between these two sharply contrasted writers, while offering useful insights into how the publishing industry is rapidly changing as it adapts to the demands of the digital age. 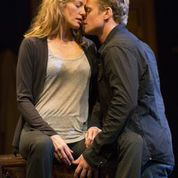 Anna Gunn, Billy Magnussen. Photo: Joan Marcus.
Olivia (Anna Gunn, of “Breaking Bad”) is an attractive 40ish novelist holed up during a snowstorm in a rural Michigan bed and breakfast to work on her new book when in from the cold bursts another writer, Ethan (Billy Magnussen), a blonde hunk nearing 30. It soon becomes clear that Ethan has sought Anna out because he loved her first book, which went nowhere 15 years earlier, but was recommended to him by a mutual friend, himself a Pulitzer Prize winner. The commercial failure of Anna’s first novel, which received mixed reviews, has made her very insecure about her next work, but Ethan’s determined to coax her into releasing her new book, albeit possibly with ulterior motives.


While Olivia, a school teacher by profession, is generally cool and reserved, Ethan is something of a force of nature, a man-child who’s equal parts wide-eyed little boy, self-promotional manipulator, self-deprecating clown (he keeps calling himself an "asshole"), and disingenuous sexual predator. He’s also a very successful author of two books that were on the New York Times best seller list for five years. This fact, combined with the various attributes of success accompanying his celebrity, gradually sneak under Olivia’s at first resistant skin and seriously impress her.


Although Ethan has aspirations to write a serious novel, his best sellers were nonfiction works called SEX WITH STRANGERS and MORE SEX WITH STRANGERS. They morphed into book form after beginning as a blog based on his descriptions of the sex he had with a series of women he met and discarded. The blogosphere exploded with interest in his brutally frank writing, most of it true but some admittedly made up, with some of the women themselves blogging about his accounts. A movie based on the book is in the works, and its development forms one of the plot lines.


The snowstorm has knocked out the bed and breakfast’s Internet and Wi-Fi, and the place has no TV, making Ethan feel totally lost (“What if you have to look something up?” he screams) without electronic access to the outside world. Inevitably, chemistry and Ethan’s natural inclinations take over, and by the end of scene one the inevitable happens, indicated by a stage direction to be repeated several times before scenes reach blackout status: “Sex is imminent.”
Anna Gunn, Billy Magnussen. Photo: Joan Marcus.


Over the course of the play’s two hours and 15 minutes, Ethan and Olivia carry on an intensely sexual relationship tempered by Ethan’s attempts to move Olivia’s career forward by rebranding her first book and even changing her name. When the second act, set in Olivia’s Chicago apartment, opens, Olivia, whose career is starting to flourish, has done some Google research on Ethan, and read his book, so when they get together again and she lets him know how upset she is with him about his chauvinistically cruel behavior toward women, emotional sparks fly as he tries to justify himself and argue that he’s not as dangerous as Olivia fears. His sharp shifts in personality cause speculation about who the guy really is, the ruthless Lothario signified by his penname, Ethan Strange, or the decent, ambitious writer, Ethan Kane, his actual name. Strange or Kane, Olivia, for all her objections to his tasteless behavior, struggles not to give in to his sexual magnetism.


Ethan’s seemingly selfless efforts on Olivia’s behalf lead to her getting a lucrative contract offer for her new book from a major publisher, even though the publisher wants to put the book out as an e-book rather than a hard copy, a concept Olivia earlier had difficulty accepting. With the money being dangled in front of her, she’s ready to abandon her ideals. However, her choice ignites a conflict set off by Ethan’s wish for her to abandon the publisher and instead give him the book for publication on a new app he’s launching to promote upcoming writers. His passion to include her book sparks an act of betrayal, which seriously damages their relationship.


The play ends with a scene set a year and a half afterward, a conventional technique for allowing us to see how far each character has moved over that time span. There’s nothing very surprising in what we learn, but Ms. Eason ends the play in a smartly ambiguous way, although my theatre companion overheard a woman complaining that the ending was a copout. I can’t offer details without providing spoilers but the situation the playwright sets up is appropriate to a dilemma that doesn't need the playwright to resolve definitively.


The give and take between Olivia and Ethan as their relationship evolves is priceless, with the relatively prim and proper, highly educated Olivia playing straight man to the self-educated Ethan’s whirlwind ardor; despite the contrast between them, both in age and temperament, each character clearly finds the fulfillment of a deep need in the other, and the actors’ honesty and vulnerability make every moment vibrant with stage magic. Mr. Magnussen has the showier role, and brings to it much of the same comic vitality and aggressive charm he revealed last year in Christopher Durang’s VANYA AND SONIA AND MASHA AND SPIKE, for which he received a Tony nomination. Like that play, this one gives him several opportunities for showing off his impressively ripped torso, but it also allows its actors many moments in which to display their acting chops, from the broadly comedic to the powerfully dramatic.


Director David Schwimmer handles his actors with sensitivity, and gets from them more colors than in a rainbow. Each line, whether it be a single syllable, like “Oh,” or one with many words, is invested with subtextual meaning. Mr. Schwimmer’s physical staging is fine, including the nicely choreographed, steamy sex scenes that end several scenes (before blackout interruptus).

Andromache Chalfant’s bed and breakfast set seems a bit abstract and nonspecific. I also was surprised that a home in rural Michigan would have a front door leading directly to the outside without a storm door there as well. Olivia’s Chicago apartment is supposed to be so filled with  books that Ethan even comments on it, yet all we see of this is a normal bookcase, like one any moderate reader might have. Japhy Weideman’s lighting captures the various times of day and weather conditions, while Fitz Patton’s sound design adds to the reality of this world with perfectly timed ring tones, texting sounds, and phone vibrations.


If I had to list the five outstanding new, non-solo, plays of the season, I’d pick: AN OCTOROON, THE FEW, THE CITY OF CONVERSATION, ARRIVALS AND DEPARTURES, and SEX WITH STRANGERS. In fact, given the latter’s open ending, I’m already looking forward to the sequel, MORE SEX WITH STRANGERS.
Posted by Samuel L. Leiter at 3:15 AM