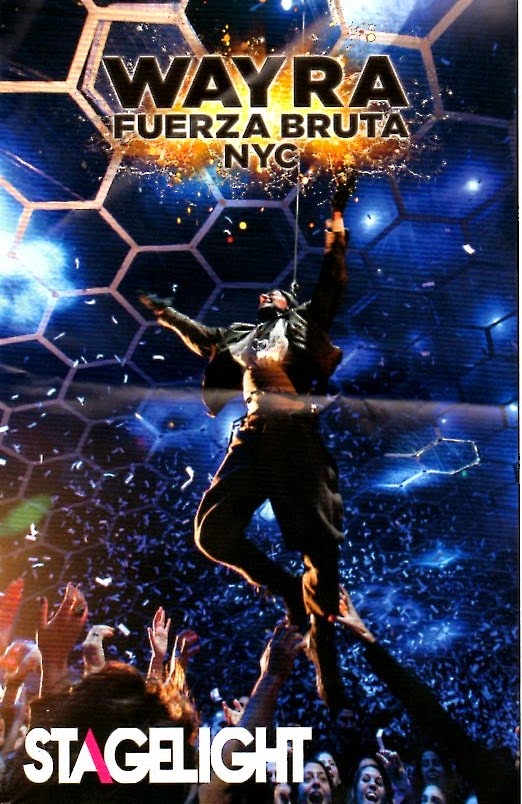 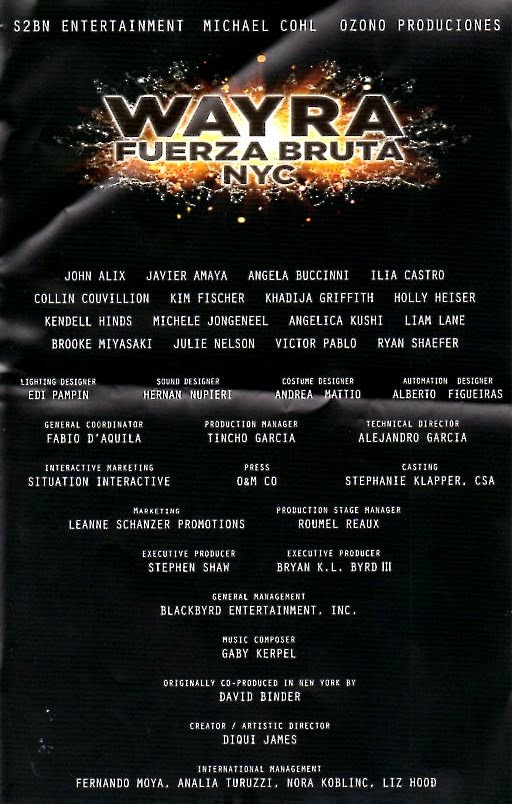 FUERZA BRUTA means “brute force,” which is a pretty good way of describing the nonstop energy of this show’s no-holds barred assault on an audience’s ocular and aural receptors. This Argentinean explosion of immersive theatre, created by Diqui James, which has been performed in many international venues, is back at the Daryl Roth Theatre, where an earlier incarnation enjoyed a run from 2007 to earlier this year. The new production is called WAYRA, which means “wind” in Quechua, certainly a suitable word for a show whose effects depend to such a great degree on powerful wind machines. Critics who’ve seen it before note that much of what they saw in its most recent incarnation as FUERZA BRUTA is being repeated; since I never saw the show before it was all new and, technically, at any rate, memorably impressive. 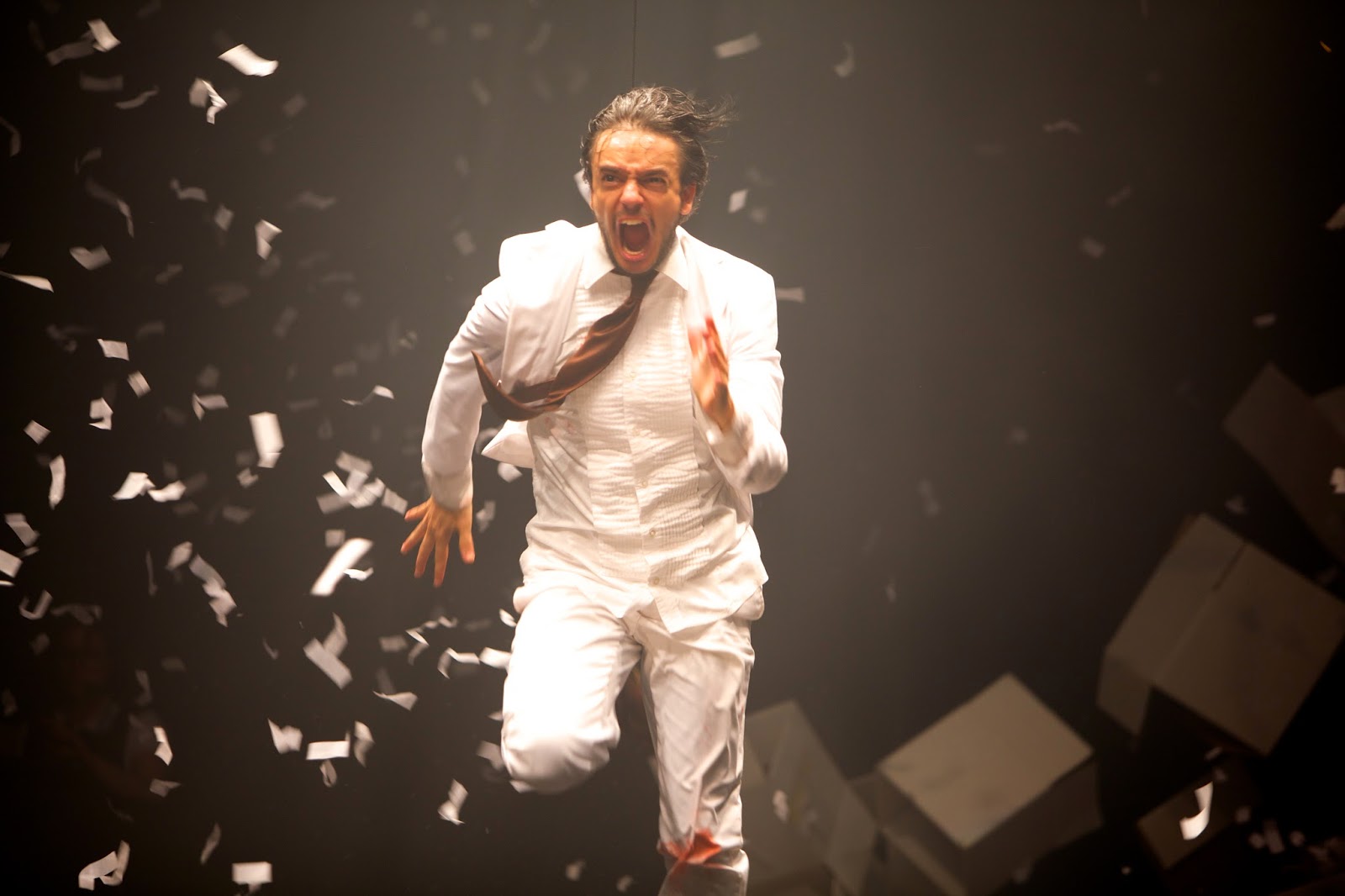 FUERZA BRUTA. Photo: Jacob Cohl.
Content-wise, WAYRA might be considered a demonstration of sheer technological wizardry devoid of characters, plot, or any semblance of story, with occasional flashes of potential drama that ultimately blend into the relentless display of lights, acrobatics, flying, head-pounding taped and live music, and treadmill running, with the audience on its feet throughout in a large, high, dark, open, and fog-filled space. When the show begins, we see a man in white walking and running on a treadmill, being passed by others who slide by him only to fall backward into an invisible trashcan, as others take their place. Plastic tables and chairs also rush by to meet the same fate, as do large framed portals filled with paper, Styrofoam, and cardboard, through which the man on the treadmill smashes, sending shards everywhere. At one point, he’s shot (BANG!) and collapses, his shirt all bloody. Not to worry, as he’s soon up and running again. Meanwhile, a group of fiery percussionists on a raised stage at one side begin banging away and singing (music by Gary Kerpel) in what sounds like Spanish but--because the words are mostly drowned out by the noise--could as easily be a made-up language like what you hear at CIRQUE DU SOLEIL.


Soon, a pair of  female aerialists start flying above us, hanging sideways as they race around and bounce off a huge, Mylar-like curtain that slowly surrounds the audience. It’s hard to tell if they’re happy or angry, but they’re definitely not placid. This hyper-expressivity runs throughout the show.
FUERZA BRUTA. Photo: Jacob Cohl.


In another feature, clearly the most spectacular, a transparent pool slides into place over the audience and, as water rushes into it, cast members go dashing, crashing, careening, sliding across, and banging their  fists on it. You stand there, craning your neck (as during so much of this aerially-oriented show) to watch these activities directly overhead, wondering about the safety of having a large pool made of some Lucite-like material filled with water and half a dozen performers suspended over a couple of hundred spectators. Then the pool descends slowly so you’re able to actually raise your hands and touch it, reaching out to the performers, who touch back (albeit with the plastic between them and you), all the while noting how the lighting keeps changing the colors of the water and actors’ bodies. 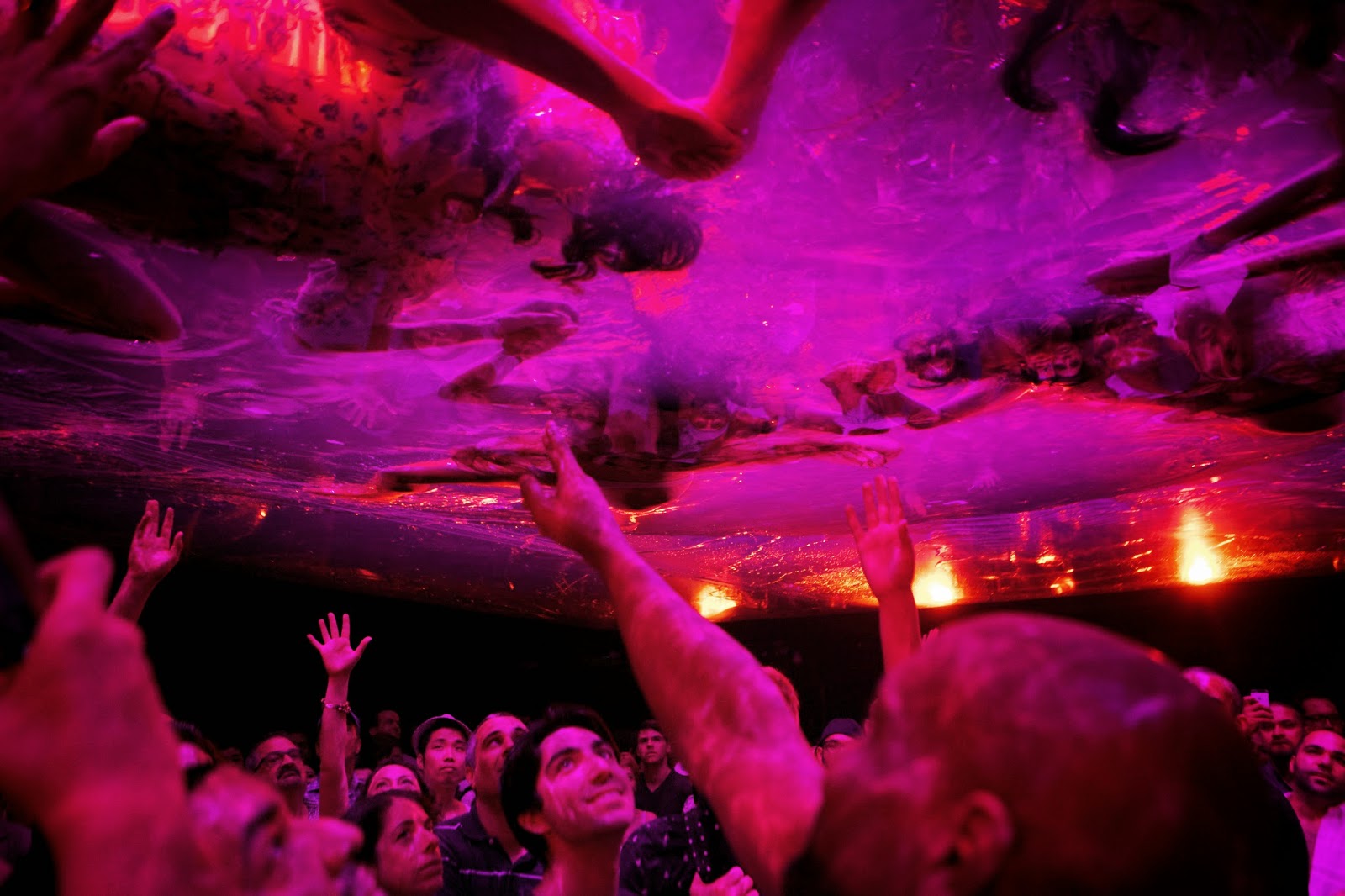 FUERZA BRUTA: WAYRA. Photo: Jacob Cohl.
The audience often has to move to make way for the technical equipment, such as when a giant disk-like sheet of silver-coated fabric is pushed to the center of the space. Suspended horizontally on either side are a man and woman who do a frantic sequence of movements as they attempt (or seem to attempt) to get to the other side of the disk, whose orientation shifts frequently. As with all the other performances in WAYRA, they display admirable acrobatic agility and skill, but a serious nod of respect also must be given to the hardworking technical crew whose efforts at controlling the movements of the disk and aerial wires are quite visible during this routine.
FUERZA BRUTA. Photo: Jacob Cohl.


In another remarkable number, you help move a heavy clear plastic sheet, crisscrossed with white tape across the space over your head, only for a wind machine to blow the plastic higher and higher until it forms a gigantic dome. You’re essentially inside a balloon, and a male and female aerialist (joined later by another man) do a sequence of movements on the outside surface, also flying in through large holes whose covers they remove. A willing audience member even gets hooked up to the apparatus and, legs locked around the female performer, flies off into the upper reaches of the space before returning safely to terra firma. Then a large tube is joined from the wind machine to one of the holes in the surface of the inflated plastic, and the male performer does various acrobatic things while suspended in this wind tunnel, as bits of paper swirl all around him (there’s a lot of confetti to clean up when the show is over). 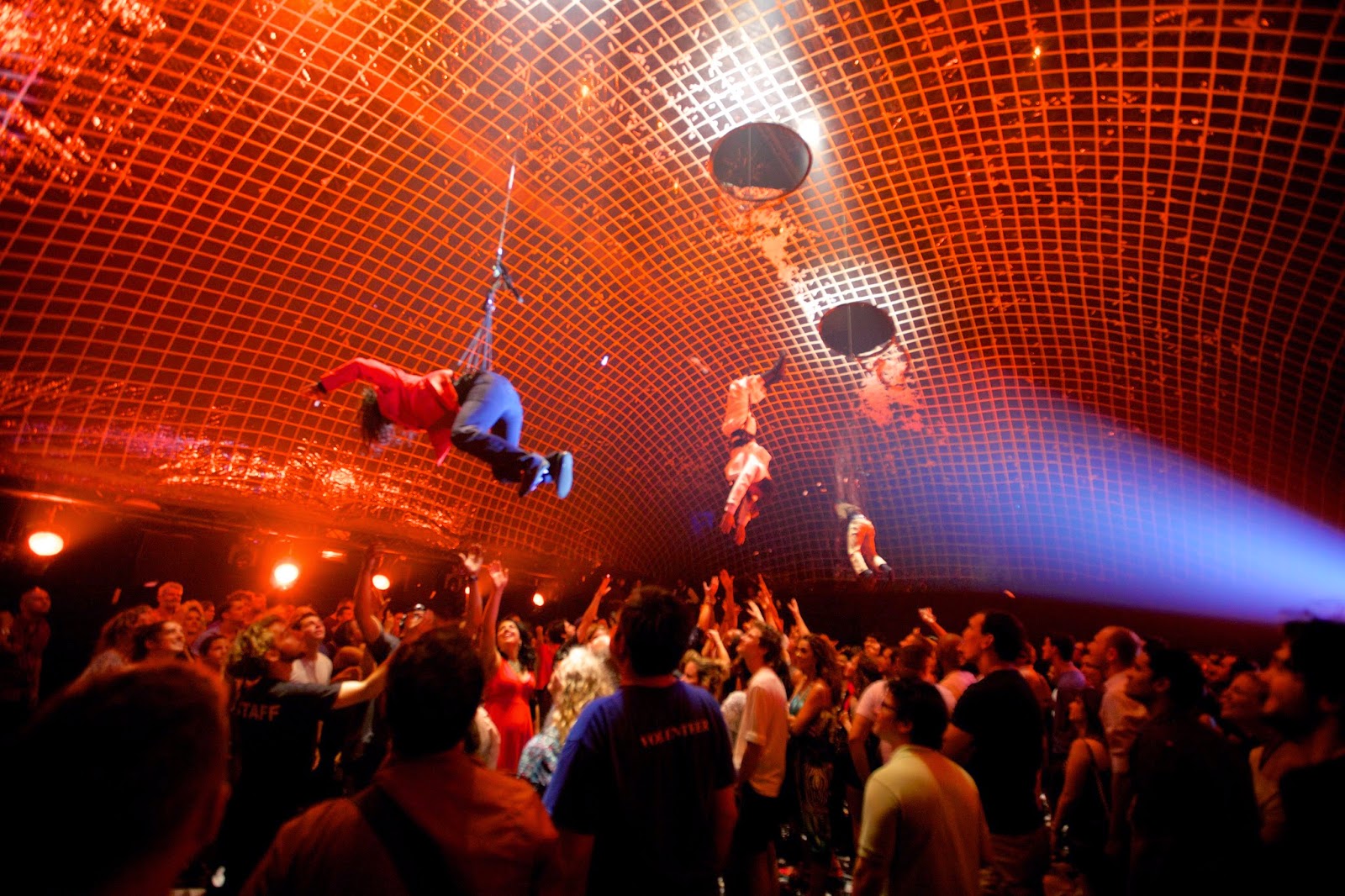 
As the lights continue changing or strobe-flashing, the music blasting with a hypnotic beat, the audience dancing and moving about as they clap or wave their hands overhead, and performers even dancing with you, you feel as if you’re in some postmodern rave, but even as you enjoy yourself, it’s hard not to worry about your safety or even about how people manage in such close, confined quarters (don’t go if you’re claustrophobic) to maintain their personal space and respect that of others. The show could easily be dismissed as mindless sensationalism, but it’s hard to ignore the input of some rather clever and ingenious minds in conceiving and putting it all together so seamlessly.


At the conclusion, a shower spigot opens above and those at the center of  the space get soaked. Amazingly, the mostly young audience under the sprinkler stayed right where it was. In fact, my theatre companion, a woman in her mid-30s, raced right to the water to participate in this joyful ritual. She emerged soaked but happy, but after 70 minutes of standing and stretching my neck upward, this septuagenarian has to admit he was glad to still be dry as he hastened out into the warm summer air at Union Square.
Posted by Samuel L. Leiter at 12:02 PM