45. PIECE OF MY HEART: THE BERT BERNS STORY 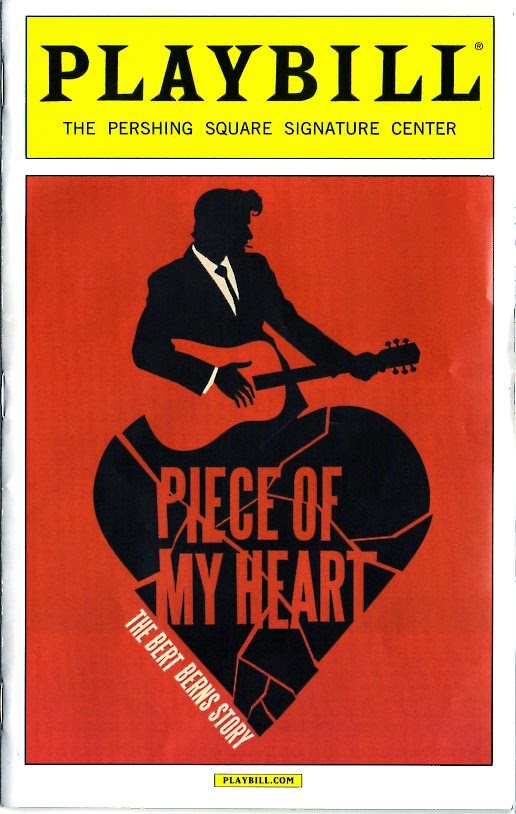 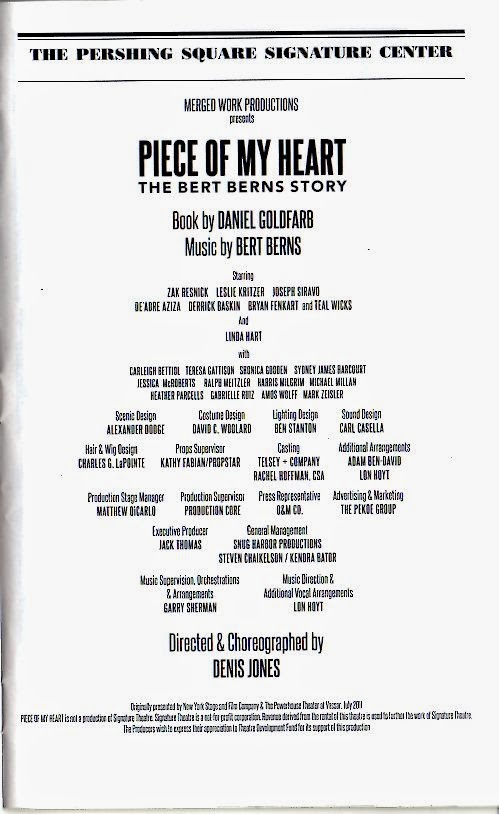 For the second time in less than a year, the song that gives this new jukebox musical its title is rocking a New York stage. Written by Bert Berns and Jerry Ragovoy, it was featured in last season’s A NIGHT WITH JANIS JOPLIN, whose Broadway production closed in February; a planned reopening Off Broadway in April was canceled at the last minute. Had it not been, there would have been two major Off Broadway shows simultaneously featuring not only “Piece of My Heart” but “Cry Baby,” another Joplin hit written by Berns and Ragovoy. While A NIGHT WITH JANIS JOPLIN was also a jukebox musical, it centered on a great singing star and the songs she sang, delivered in an approximation of a concert performance interlarded with personal anecdotes; PIECE OF MY HEART, as its subtitle indicates, is a bio-musical about songwriter and record producer Bert Berns, a name few, apart from musical aficionados, recognize today.

PIECE OF MY HEART makes Berns out to have been something of a guitar-playing singer as well (the program cover depicts him in semi-Elvis mode), although there’s no way of knowing if he was as skilled in this department as Zak Resnick, who plays him. The rock ‘n roll and soul songs he wrote were recorded by many top artists, none of them named Bert Berns (and barely any of whom are mentioned in the script). Bert Berns, in fact, was only one of several names he used, but the show doesn’t touch on this. 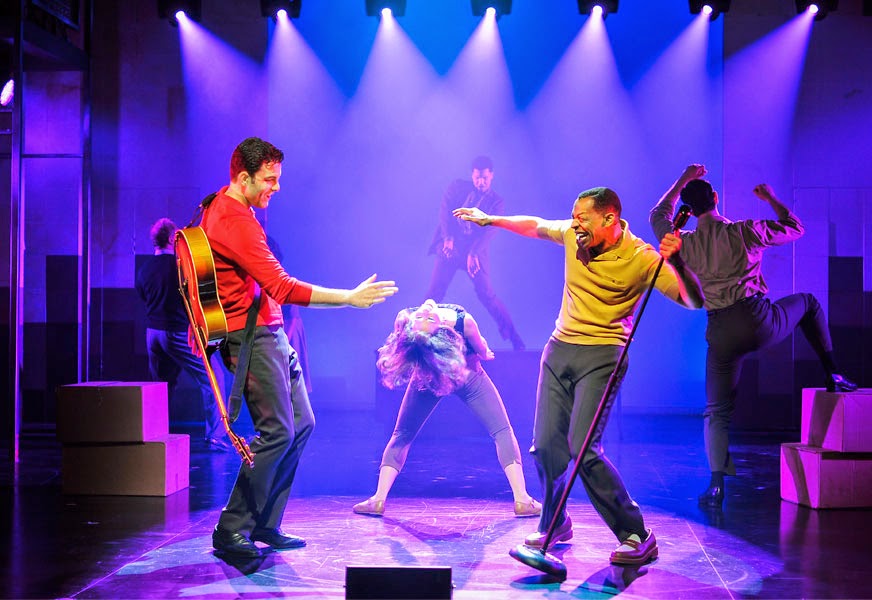 In telling “the Bert Berns story,” book writer Daniel Goldfarb dramatizes Berns’s brief but impressive career from 1960 to 1968, when he died of a heart attack at 38. Having suffered from rheumatic fever at age 15, Berns constantly lived under the shadow of death, and the show keeps harping on the necessity of living life to the fullest while you still can. According to the libretto, Berns, the Bronx-born son of Russian-Jewish parents, was fond of quoting the ancient Jewish philosopher Hillel: “If I am not for myself who is for me? And being for my own self, what am I? And if not now, when?” the last sentence being repeated several times during the show. Hillel’s words stand out amid a plethora of dialogue for which banal would be a compliment. 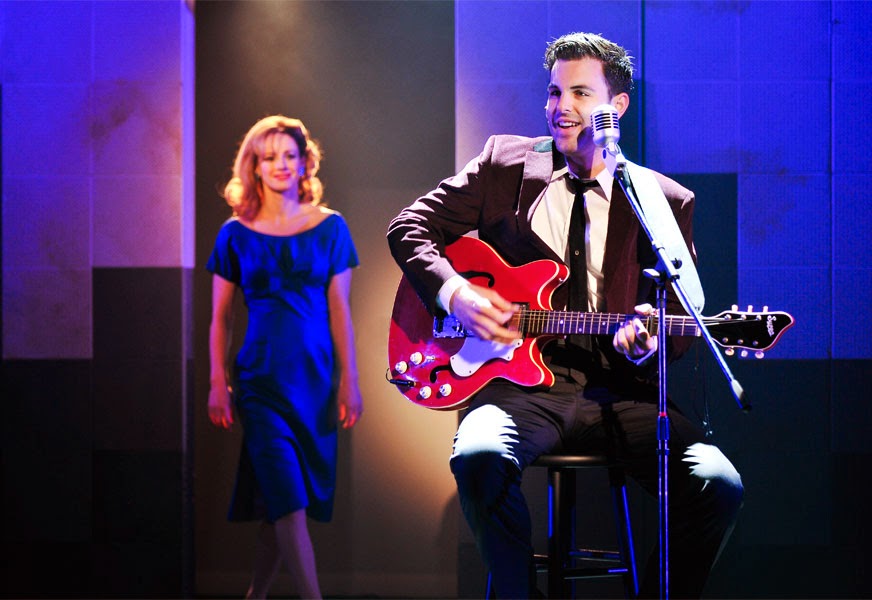 Teal Wicks, Zak Resnick. Photo: Jenny Anderson.
Since every jukebox musical seems to need a frame, Goldfarb provides one by introducing Berns’s daughter, a struggling singer-songwriter named Jessie (Leslie Kritzer), living on the West Coast, who receives a mysterious phone call from a tough-sounding New Yorker to come East for an important reason he’ll divulge only when he meets her. The man she encounters in her dad’s old office in the famed songwriting emporium known as the Brill Building (fast becoming a stock Broadway setting) is an Italian-American nicknamed Wazzel (Joseph Siravo), a middle-aged man who looks, sounds, and behaves like a refugee from “The Sopranos”; Bern’s one-time manager, he’s concerned about the need to protect Jessie’s father’s musical legacy. Her mother, Ilene (Linda Hart), he informs Jessie, is on the verge of selling the rights to Bert’s catalogue for a large sum of money, without getting her kids’ okay. This opens the door to Wazzel’s recounting his memories of Berns, memories that will be countered by those of Ilene, as their stories are enacted in flashback, with younger versions of Wazzel (Bryan Fenkhart) and Ilene (Teal Wicks), a one-time go-go dancer, playing out  their lives as their older counterparts look on.


Like BEAUTIFUL: THE CAROLE KING MUSICAL and so many other shows of this ilk, PIECE OF MY HEART: THE BERT BERNS STORY tells of the trials and tribulations, musical, professional, and personal, of its eponymous subject. Unlike BEAUTIFUL, its recreation of Berns’s life isn’t about how he came to write his many hit songs (a remarkable 51 in seven years), but looks mainly at how he lived his life as a songwriter, producer, friend, lover, and husband. Naturally, we get the standard clichéd glimpse into the ruthless world of record producing in the 1960s, with recording sessions featuring major producer Jerry Wexler (Mark Zeisler); there’s even a scene with a young Phil Spector (the actor is uncredited), whose ideas on how to produce “Twist and Shout” Berns adamantly rejects, leading to his own career as a big producer.

Although some of the biographical material (like the over-extended scenes about Berns’s visit to pre-Castro Cuba, where he ostensibly was influenced by Latin music) is based on fact, it’s hard to determine how much is true and how much claptrap; there’s a strong feeling that the balance falls on the latter. For example, the name of Berns’s daughter—born only months before Berns died—has been changed from Cassandra to Jessie (to make her “an amalgamation,” says the program), even though Cassandra Berns and her brother Brett are two of the lead producers. For all the efforts to show Berns’s seamier side, there’s clearly an air of hagiography here; you have to take what you get with a chunk of salt.

The biggest problem is the decision (à la MAMMA MIA!) to use Berns’s music for storytelling purposes, finding ways to incorporate it that somehow are related to the events being enacted. For an egregious example, think of Berns’s ultimate heart attack and the show’s title song. Then there’s “Cry Baby,” sung to a crying infant in a bassinet. Moreover, since, of the 26 songs performed, only nine have both lyrics and music by Berns, most of the lyrics can’t even claim to be autobiographical. Even if they were, their lack of chronological connection to Berns’s life would invalidate this way of telling his story. (It’s also curious that Berns’s lyricist collaborators get no mention, giving the impression that he wrote each song entirely on his own.) Forcing the songs into the drama creates an uncomfortable feeling that at least some of the drama was created to match the songs.

There’s no question that Berns made a striking contribution to the music of his generation (he was posthumously inducted into the Rock and Roll Hall of Fame in 2009), but, despite his having written many successful tunes, it’s unlikely that most theatergoers, even those around during the 60s, will recognize them. Many will be familiar with “Piece of My Heart,” “Twist and Shout,” “Here Comes the Night,” “Hang on Sloopy,” “I Want Candy,” “Tell Him,” and “Cry Baby,” but I wonder how many can hum the tunes of “Heart Be Still,” “If I Didn’t Have a Dime (to Play the Jukebox),” “Show Me Your Monkey,” or “I’ll Be a Liar”? Not that this is a bad thing, as one aim of the show is to reintroduce Berns’s music to a public that, by and large, has forgotten most of it. And some of the songs do deserve a new life, among them “I’ll Be a Liar,” sung with fierce determination by Linda Hart’s Ilene when accused by her daughter of not telling the truth about Berns (sample spoiler: he didn’t go to Juilliard). But, in general, few of the songs hold up as distinctively as they may once have, and, even with Garry Sherman’s new orchestrations, there’s too generic a period feel to many of them. Played as dramatic arias within the storyline, they take on feelings and attitudes that may have had nothing at all to do with what inspired them, or how they were interpreted by the artists who once made them popular.

Set designer Alexander Dodge’s opening image on the stage at the Pershing Square Signature Center is an iconic one of an abstract New York skyline with a bold shaft of light illuminating a stool slightly off center. Surrounding the space is steel scaffolding on the upper level of which sits the eight-member orchestra. The atmosphere is what one might expect for a cabaret-type show, and we get that impression when Bert and others enter for the opening number, but the show has multiple locales to recreate, which it accomplishes through sliding units that provide just enough scenery and props to establish locales. It’s all standard stuff for shows like this, just as are Ben Stanton’s multifaceted lighting and David C. Woolard’s mostly period costuming. All very professional and respectable, but, like the show itself, not particularly different from what you’ve seen many times before.

The singing is first rate, as is much of the acting, although Bryan Fenkhart’s Young Wazzel overdoes the stereotypical thugishness, and Zak Resnik’s Bert seems increasingly melodramatic, especially all those times he grabs his chest when facing a crisis. Both Ms. Hart and Teal Wicks are outstanding as Ilene, the slender Ms. Hart with her tough Jewish mother routine, and the beautiful Ms. Wicks as Ilene’s younger self, in whom we can sense her older persona’s sharp pragmatism. Ms. Kritzer, always a talent to admire, is not particularly charismatic as the rather downbeat Jessie. Derrick Baskin as Hoagy Lands, the black soul singer Berns was forced to betray—at least in the script—by replacing him on “Twist and Shout” (with the Isley Brothers, unmentioned), does a fine job in an undeveloped role, and the sleek De’Adre Aziza, who played Nina Simone and Odetta in A NIGHT WITH JANIS JOPLIN, makes a strong impression as Candace, the sensual black woman with whom Berns has a love affair before meeting Ilene.

Denis Jones’s direction and choreography do what’s needed to keep the multi-scened, time-spanning material moving, but, even played at a mostly up-tempo pace, and with several numbers that get your pulse racing and your toes tapping, the two hour and 20 minute show tends to drag because its inherent drama is so thin and its lines so uninspired. As presented here, the conflicts are simply not big enough to twist and shout about, and the major suspense lies in waiting for that preordained moment when a piece of Bert Bern’s heart gives out. Still, when the company assembles for the curtain calls and gives its all with reprises of two big numbers, your own heart may jump as you find yourself clapping along with everyone else.
Posted by Samuel L. Leiter at 8:07 PM