If we were to listen to the thoughts of one of this play’s characters, Tanya Saracho’s MALA HIERBA (at Second Stage Uptown’s McGinn/Cazale Theatre) might be viewed as a contemporary take on the story of Lilith, a demon-like female in Jewish folk mythology, who was married to Adam before the more docile Eve was created, but who refused to be subservient and therefore left him. The Lilith character is Liliana Cantu (Marta Milans), the stunning, Mexican trophy wife of a wealthy drug magnate living in the Rio Grande Valley on the Texas border. Like any employee holding a profitable job dependent on someone else’s whims, this woman in her late 20s is constantly engaged in a struggle to strengthen her status by strategizing to make the most of her assets. Her husband, Alberto, we learn, has been married so often she refers to him as Henry the Eighth, so she’s quite aware of the precariousness of her position. At first, this is expressed mainly through her seeming vanity; her hours are filled with an obsession to look perfect for her husband, clothing, makeup, hair, and the creeping presence of body fat (she’s a former bulimic) being her pet preoccupations. 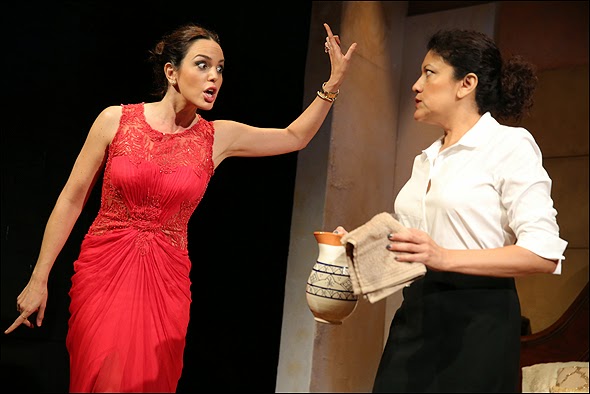 Marta Milans, Sandra Marquez. Photo: Joan Marcus.
We never meet Alberto, whose 55th birthday is being celebrated at the house with a big, expensive party. His threatening offstage presence is palpable, however, and the characters constantly worry about his moods; among his habits is tranquilizing others by feeding them Tafil pills, and having sadistic sex with his wife. Those closest to Liliana include her whiny, spoiled, cocaine-snorting, foul-mouthed, bratty stepdaughter, Fabiola (Ana Nogueira, sensational), a 25-year-old out-of-control case of arrested development who lies about attending college and manipulates Liliana to get clothes, jewelry, money, and even her brand new car (truck, actually, a Ford Expedition). “Why are you the best?” she asks her stepmother. “You are my favorite of my dad’s wives, you know that? Totally mean it.” Liliana, sensing the danger Fabi represents, and thinking she needs her good will, grits her teeth and gives in to her insistent demands.


Yuya (Sandra Marquez), the older woman who raised Liliana, now works as her maid, confidante, and enabler, and serves as the play’s voice of reason. Finally, there’s Maritza (Roberta Colindrez), a butch lesbian artist from Chicago, dressed in black 80’s blazer and skinny jeans; once Liliana’s girlfriend, she shows up, to Liliana’s initial distress, even though it’s in response to a desperate phone message Liliana left her in a moment of panic. After they reignite their relationship, Maritza tries to persuade Liliana to give up her glamorous lifestyle and run off with her back to Chicago. Liliana—dubbed by Maritza’s mother the “bad seed/weed” alluded to in the title—is torn between her love for Maritza, her sense of responsibility for her family’s wellbeing (her dad’s medical bills, her mother’s house, her sister’s tuition), her unease with her marriage, and Yuya’s pragmatic advice on how to get rid of Maritza and use her wits to make the best of things. Nothing is free in this life, including the supposed benefits of marriage to a wealthy and powerful man.


These pressures lead to a melodramatic confrontation with Maritza on a dirt road, at which point Ms. Saracho opts for an implausible resolution; without giving away what happens, I can observe that the plot not only stumbles into unlikeliness but that a huge hole remains unfilled as it moves to its conclusion.


Much of the action in this 90-minute, intermissionless, drama transpires in Liliana’s bedroom, at stage right, with the area at left available for exteriors. A scene later in the play takes place in a motel but if you don’t listen closely you’ll assume it’s the same place. (Raul Abrego did the set design.) Since there’s no obvious difference between the two rooms, the bed as seen in Liliana’s room is unable to match the script’s description as “The best that money can buy and the tackiest money can buy”). In the motel it’s the site of a sex scene between the curvaceous Liliana, wearing very sexy, scanty black lingerie, and the bone-thin Maritza, fully clothed; for all its kissing and groping, though, you should see the movie BLUE IS THE WARMEST COLOR if this is what you’re looking for. Live mainstream sex scenes like this in small venues like the McGinn/Cazale either have to really break barriers or find some way to suggest what’s going on without actually showing it.

Jerry Ruiz’s direction is not much more than satisfactory; the more physical scenes, including the several moments of violence (credited to fight director Thomas Schall but certainly the director’s responsibility as well), are unconvincing, possibly because the actresses are being too tentative. And surely, when Yuya makes up the bed in the first scene, the director should ensure that the actress does a better job. My wife would never let me get away with all those saggy creases.

On the other hand, Mr. Ruiz elicits a couple of strong performances. Ms. Milans, who hails from Madrid, is a pleasure to look at and delivers her lines with authority; it’s too bad she lacks the tangy color of actresses like Penelope Cruz or Sophia Vergara. While her English sounds almost American (she also speaks five other languages), I hope it doesn't sound racist to suggest that a spicier Latina accent would be helpful.  Much stronger is Ana Nogueira’s Fabi; she electrifies the stage with her needy, greedy, self-centered behavior, only to reveal true vulnerability when her father finally puts his foot down. Her single false note isn’t her fault; Ms. Nogueira is at least a head shorter than Ms. Milans, and clearly not as voluptuous, but when she dons a fashionable dress of Liliana’s she likes (Carissa Kelly did the fine costumes), it fits her like a glove. Sandra Marquez’s Yuya, whose dialogue, like Liliana'a, is littered with Spanish expressions, is every inch the smart cookie who helped shape the south of the border hot tamale she serves. Ms. Colindrez as Maritza slouches about in mannish fashion but her low-key manner grows dull; she was much more memorable in last season's FUN HOUSE, where she also played a lesbian.

Jen Schriever’s lighting and Jill BC Du Boff’s sound design—including an excellent selection of Latin transitional music—help make the production watchable and listenable. Ms. Saracho’s dialogue, with its constant mingling of Spanish and English, its profanity, and its considerable infusion of black comedy (funnier on the page than stage), is alive with colloquial vitality.

MALA HIERBA, boiled down to its essentials, is the familiar story of a disillusioned spouse who considers running away with someone else, the twist here being that the lover the spouse wants to hook up with is of her own gender. The playwright has created an interesting enough dramatic world in which to revisit this story, but the working out of the plot runs into difficulty and leaves one with a feeling of incompleteness. The Mexican-born Ms. Saracho, who writes for HBO’s “Looking,” is a playwright to watch, though, and MALA HIERBA shows the good seeds of a promising career.
Posted by Samuel L. Leiter at 7:55 PM