44. THE PIANIST OF WILLESDEN LANE 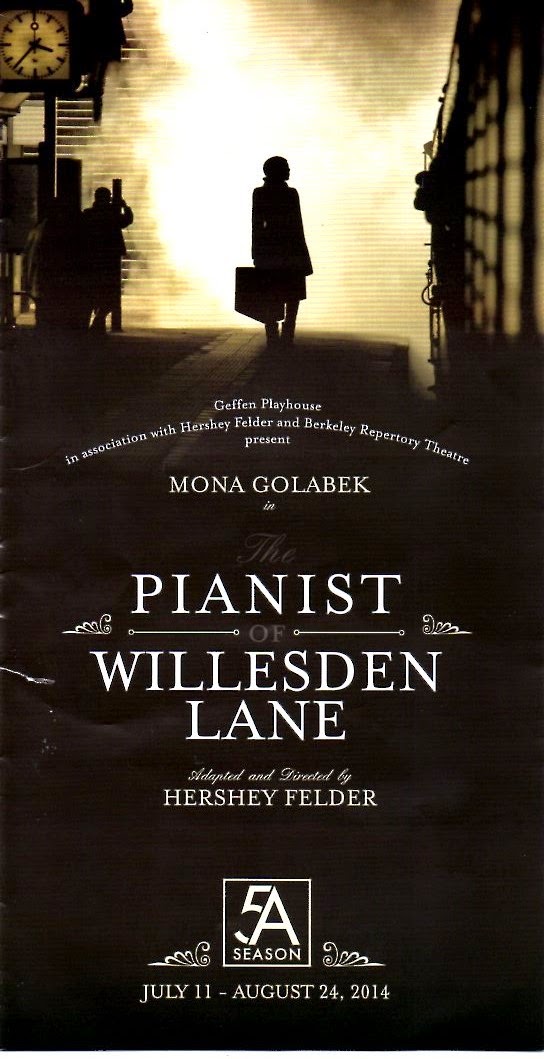 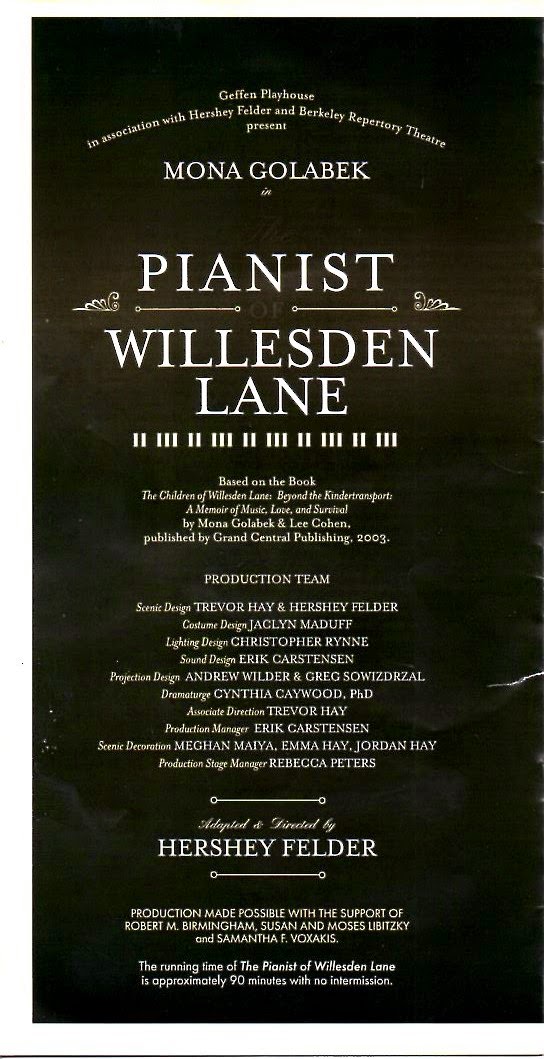 Twenty years ago the Manhattan Theatre Club produced Diane Samuels’s KINDERTRANSPORT, a moving drama about the 1938-1940 rescue operation that sent nearly 10,000 Jewish children from Germany, Austria, Czechoslovakia, Poland, and the Free City of Danzig to protection in British homes and schools. Most never saw their families again. Each of those children had a story to tell, of course, and a number of them have appeared in English as memoirs of one sort or another. One is The Children of Willesden Lane: Beyond the Kindertransport: A Memoir of Music, Love, and Survival, by Mona Golabek and Lee Cohen, which has been adapted for the stage by Hershey Felder as THE PIANIST OF WILLESDEN LANE. This touching, exceptionally well performed solo piece, directed by Mr. Felder (himself a renowned performer of solo plays about great musicians), originally was seen at Los Angeles’s Geffen Playhouse, and has been produced at other leading venues. It has opened in Theatre A at 59E59, and is a must-see, both for its sophisticated, deceptively simple presentation and the virtuoso performance of Ms. Golabek herself as she tells the story of her mother, Lisa Jura Golabek, who fled Vienna as a Kindertransport child in 1938. 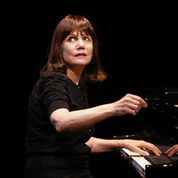 Mona Golabek. Photo: Carol Rosegg.
Ms. Golabek, a successful concert pianist who hosts a classical music radio program and who was taught by her mother, just as her mother had been taught by hers, introduces herself at the opening, on a black set (designed by Trevor Hay and Mr. Felder) dominated by a Steinway grand piano. The rear wall carries large, decorative picture frames in whose openings numerous projections (the excellent work of Andrew Wilder and Greg Sowizdrzal) will be seen, illustrating the story she tells. She wears a simple black dress (designed by Jaclyn Maduff) with gently puffed short sleeve. Her auburn hair (actually, a too obvious wig) is styled in a page boy cut with bangs; it hints at the youthfulness of the role she'll be playing, but also doesn’t seem out of place as the character matures. Ms. Golabek soon transforms into her mother, Lisa Jura, as a 13-year-old girl growing up in elegant, artistically abundant, prewar Vienna as the talented daughter (she had two sisters) of a pianist mother and high-class tailor. She tells us that when the Nazis begin tormenting Austria’s Jews, as most vividly represented by Krystallnacht, November 9 and 10, 1938, she was sent to Britain as part of the Kindertransport mission, leaving her sister and parents behind. The play recounts her various experiences in England, where she was treated kindly, and where her talents as a musical prodigy helped her get into the Royal Academy of Music, even though she also had to work in a factory sewing army uniforms. We learn of her friendships with other Kindertransport children and of her eventually playing piano in the lounge of London’s Howard Hotel, where she met the handsome French resistance officer she would one day marry. As her story progresses we get a taste of London life during the blitz as it was experienced by Lisa and her friends, including the destruction (and ultimate reconstruction) of the hostel she stayed at in Willesden Lane. Although her parents died, her two sisters survived the war, several years after which she immigrated to the United States, where she was followed by the French officer, Ms. Golabek's father. 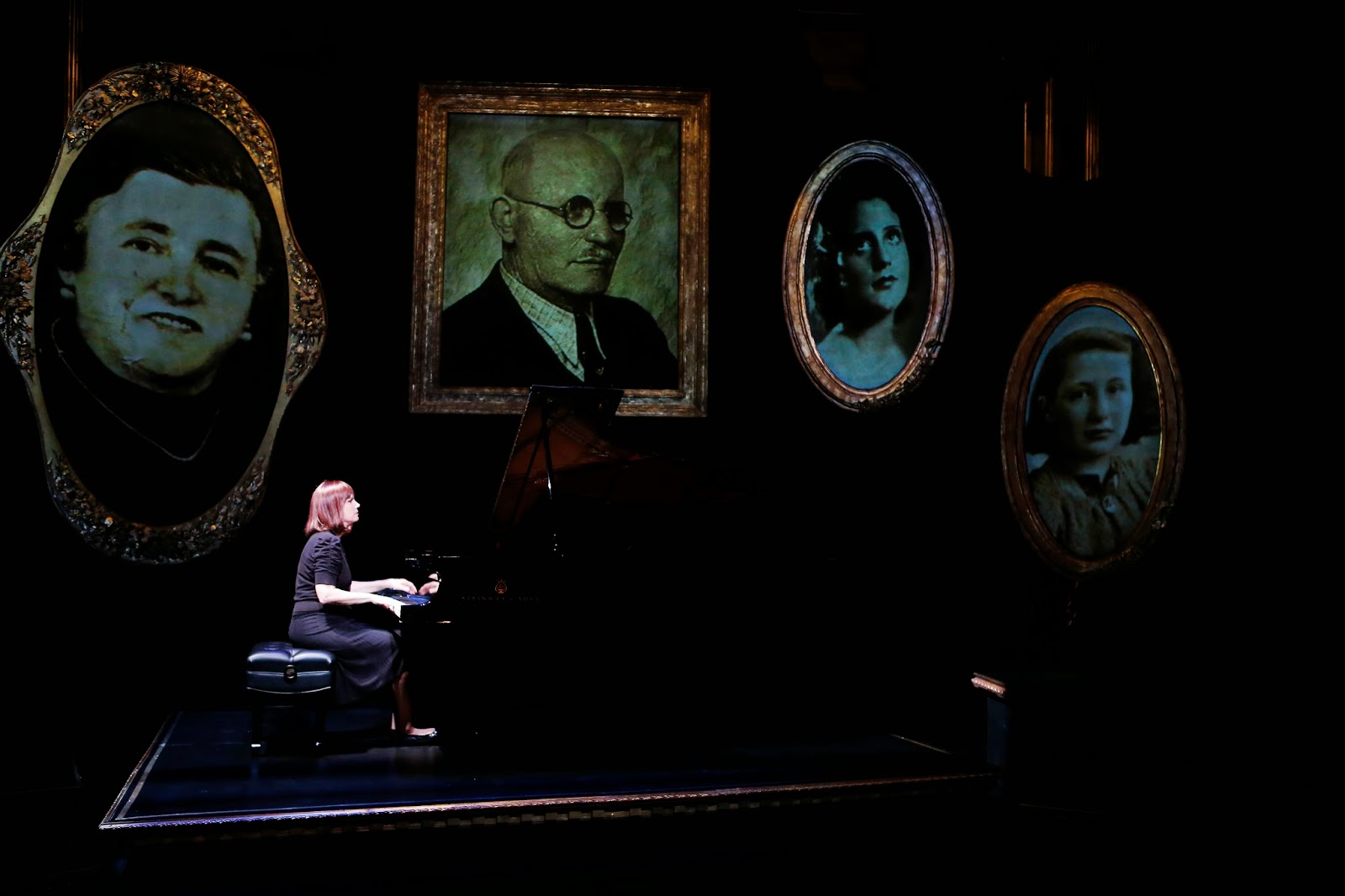 Mona Golabek. Photo: Carol Rosegg.﻿
As Ms. Golabek narrates she embodies different characters, male and female, old and young, altering her voice enough to convey the accent or gender of the person she’s representing. Although she doesn't do Jefferson Mays-type transformations, she manages to make it perfectly clear who’s talking. She never rushes, always taking care to be precise, both in the way she moves her hands to mime something, or in how her graceful body language expresses various emotions. Her acting seems at the start a bit tentative, but that impression gradually fades as we become ever more absorbed by her sweetness and sincerity, not to mention the innate interest of her story. Most remarkably, as she plays both Lisa and the other characters, she often sits at the piano to accompany herself with a variegated concert of mostly classical music, playing with delicacy and passion but never, until the final number, Grieg’s “Piano Concerto in A Minor, op. 18; third movement,” getting swept away by emotion. Throughout, no matter how complex the music—which includes familiar classics from Beethoven, Debussy, Chopin, Bach, and Rachmaninoff, with two nods to popular music in “Strike Up the Band” and “These Foolish Things (Remind Me of You”)—she performs with seeming effortlessness, the piano playing seeming more an extension of her acting than a performance of its own. I sat in the second row and could swear she never broke a sweat until she attacked the final Grieg concerto. I don't profess to know much about either classical music or virtuosic piano playing, but I definitely was caught up in the beauty and technical expertise of Ms. Golabek’s artistry.
Hershey Felder’s direction is perfectly in tune with the needs of the material, and is supported by an expert sound design by Erik Carstensen and significantly varied lighting by Christopher Rynne. THE PIANIST OF WILLESDEN LANE reminds us of a horrendous time in modern history, but it is an uplifting work that demonstrates both the resilience of the human spirit and the indescribable power of great music when exquisitely played from the heart. Brava.

A postscript, if I may: the Kindertransport story is a particularly timely one, as it reminds us of a moment not that long ago when Britain’s humanitarian impulses allowed it to open its arms in a time of crisis to 10,000 Jewish children who were in harm’s way. It’s impossible not to think of the catastrophe brewing right now in Texas over the plight of over 50,000 immigrant children fleeing repressive societies in search of a better place to live. In 1938, with war looming, the English people were facing a situation of life and death that would soon cause severe food and fuel shortages in their island nation, but despite the hardships they were about to endure, no one then or later spoke out against the arrival of the children the way so many are now doing in our country. Take, for example, the words of Gregg Griffith, who lives next to the shelter in Oyster Creek, Texas, where many of the children have been housed, as reported in the New York Times (July 17, 2014, p. 1): “That’s my tax money taking care of a foreign national. . . . I don’t want to take care of a foreign national. It’s not my problem. . . . I sort of feel like we should be taking care of our own first.” The situations, of course, are not really the same, but what’s happening now is definitely a humanitarian crisis involving threatened children; whatever the solution, saying one doesn’t want one’s tax money helping a mass migration of indigent kids because they’re not our own was not the way the British handled their problem 76 years ago.
Posted by Samuel L. Leiter at 8:10 PM