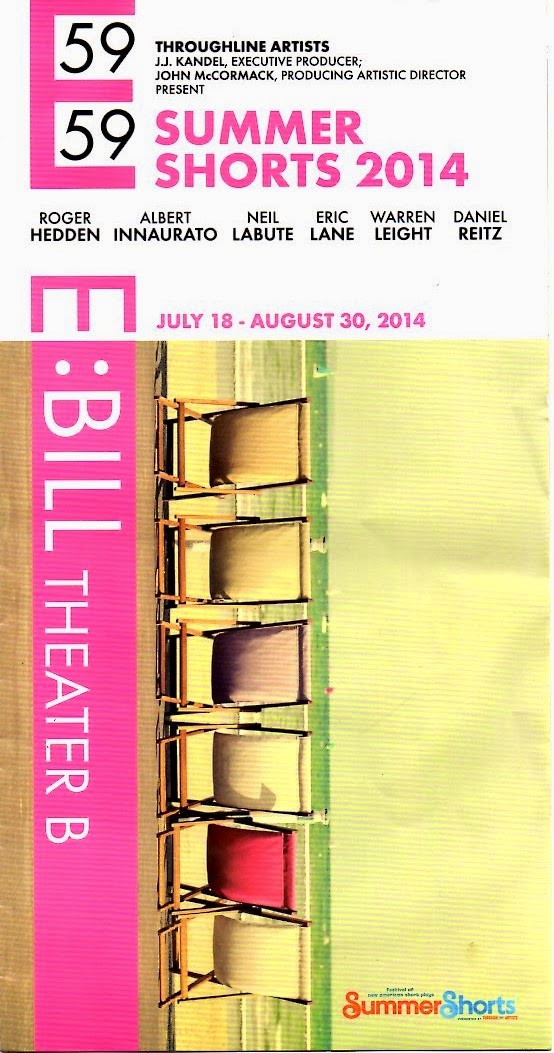 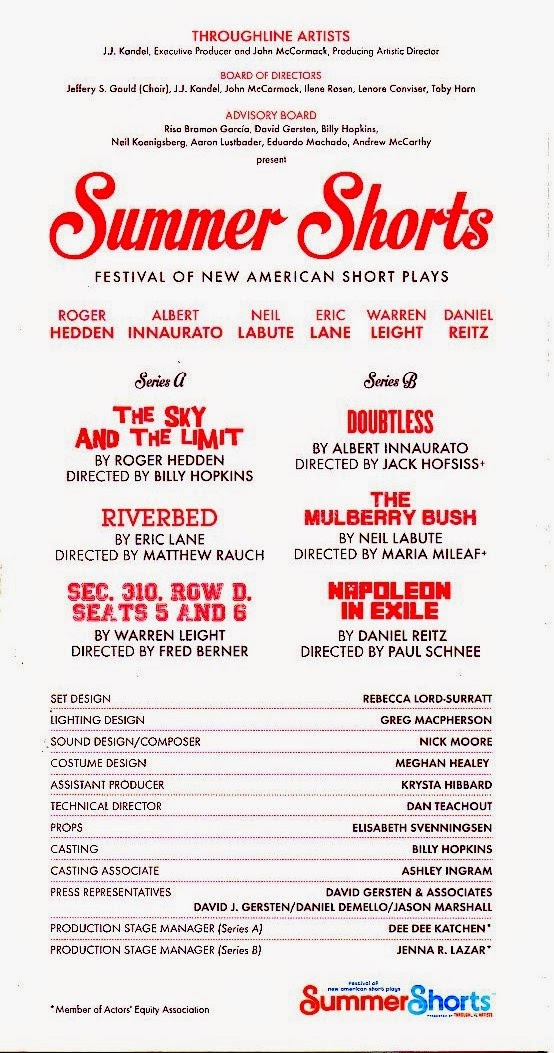 I greatly enjoyed much of the writing in the three one-act plays included in the first program of this year’s edition of SUMMER SHORTS at 59E59 Theatres. I did not, however, greatly enjoy their performances. This annual event, in which rising and established playwrights receive low-budget stagings of their new one acts in two programs, Series A and Series B, has opened with a trio of plays loosely tied together by themes of friendship, loss, and recovery, the losses being largely in the form of death, but of other things as well. 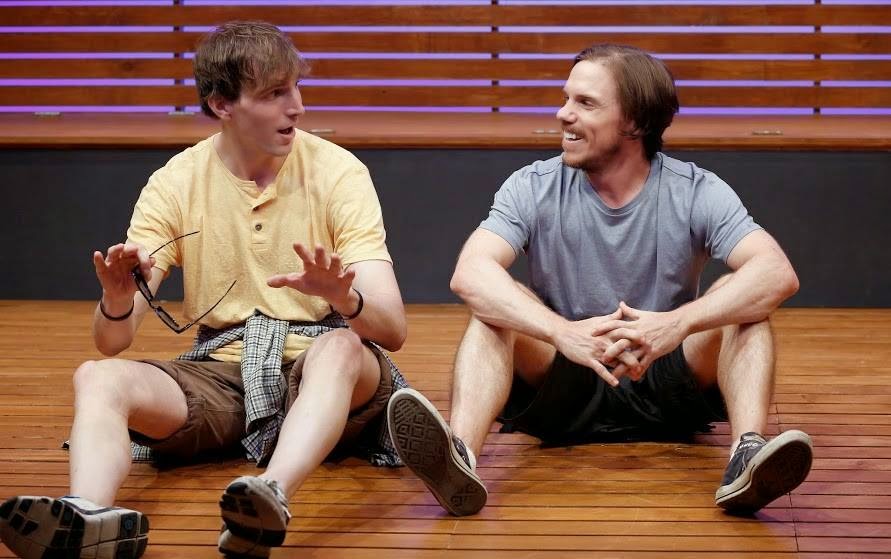 All three plays—performed seriatim, with no intermission, over an 80-minute span—use the same neutral set of horizontal wood slats, designed by Rebecca Lord-Surrat and lit by Greg MacPherson—looking much like the interior of an unfinished (or deteriorating) structure, set before a sky backdrop. It serves as anywhere the action needs to be, much the way a noh stage does. In Roger Hedden’s “The Sky and the Limit” it’s a mesa in some Southwestern desert where two stoner buddies, Aldie (Alex Breaux) and George (Shane Patrick Kearns), are out hiking. When the play opens George is lying flat on his belly, having landed thus after leaping from another mesa. Although he’s badly shaken and is experiencing pain, he seems otherwise okay, and is soon engaged in casual chatter with Aldie. Aldie, while concerned for his friend’s dilemma, treats it as essentially inconsequential, just a secondary mishap in the course of their excursion into the great outdoors. Questioning George about his mobility and receiving positive replies, Aldie asks, “Can you do the hokey pokey and turn yourself around?”

As George gradually recovers the guys banter about George’s foolish leap; the crooked shape of George’s penis (which, George learns, is common knowledge among their mutual friends); George’s love affair with a girl named Shawnee, whom he intends to marry on this spot because of its beauty; and Shawnee’s parents, a country club couple named Ruth and Lloyd Potter. Talk about the wedding leads to their role-playing as the snooty Lloyd and his wife, and to the revelation that the wedding might be a Jewish one. Some potentially laugh-worthy lines emerge.


GEORGE: Yeah, on her mother’s side.


ALDIE: Dude, that’s the side that counts.


GEORGE: What do you mean?


GEORGE: Who decided that?


ALDIE: The God of the Old Testament. But it’s against the Jewish religion to ever say his name. They call him G dash D. If they absolutely have to—and then they whisper it—G dash D.

The playwright milks the Jewish angle for additional humor as the conversation about the wedding and the mimicking of the Potter parents continue. The satire at the expense of these upper-class snobs is priceless, including the news that Ruth, like them, is a pothead (the boys themselves light up, of course). But, suddenly, the mood shifts when George takes a turn for the worse and the play veers sharply in a new and unwelcome direction.

After a brief pause, a scene taking place 40 days later follows, when Ruth (Allison Daugherty), dressed incongruously for a hike in the desert, shows up at the mesa, where she finds Aldie (wearing a laughably amateurish beard), who’s been camping here since the incident with George. Ruth wants Aldie to fly home with her and Shawnee, who she thinks might benefit from his company. This last scene seems tacked on and its revelations that Shawnee’s in therapy and Ruth’s not Jewish seem unnecessary.

On paper, Mr. Hedden’s script is hilarious; I must have snorted or barked with laughter a dozen times when reading it. During the production, though, I was dismayed to hear little but scattered titters and chuckles. The actors, while perfectly natural and believable, have been directed by Billy Hopkins to speak rapidly and underplay, which muffles laugh after laugh. Of the two leads, the mush-mouthed Mr. Breaux is notably lacking the comedy gene, at least with this kind of material. The play needs more than naturalistic acting to work; its humor is bound up not in physical behavior but in smartass and often ribald humor that the characters should enjoy getting off on when speaking it as much as we do when hearing it. So much is simply thrown away that the comedy remains as flat on its belly as George in the first scene.

The second play, by Tony-winning playwright Warren Leight (SIDE MAN), is “Sec. 310, Row D, Seats 5 and 6,” not an easy title to remember, and it, too, has much to recommend it. I’m sure my friends Jerry and Larry, avid basketball fans, would appreciate it much more than I because of all its inside commentary on the countless fiascos of the Knicks over the course of the past two fruitless decades. Still, even the basketball-challenged, like me, can appreciate the way Leight integrates the ongoing personal issues over those decades of three friends who share two season tickets at Madison Square Garden.

Two rows of seats (benches, actually) are seen, both presumably filled with fans during an eternal Knicks game that sees, in the eponymous front row, Josh (Cezar Williams), Eddie (Geoffrey Cantor), and Roman (Peter Jacobson) in varying combinations of two. Segments of frustrating games that are probably etched in loyal fans’ memories are viewed as time moves forward, one scene morphing into another as someone edges his way in or out past the invisible spectators to either side. (Unfortunately, these exits and entrances got more consistent laughs than anything else in the performance, although I had no idea of what the audience found funny in them.) As the characters intermittently respond in anger or desperation to the ineptitudes on the court, we learn of their romantic, marital, and familial issues. These keep evolving, sometimes with amusing developments, as when Eddie’s wife leaves him for another woman, or even poignant ones, but through it all, the one dependable thing in their lives is that the Knicks remain constant losers, no matter who the players or coaches are.

“Sec. 310, Row D, Seats 5 and 6,” directed by Fred Berner, is a clever enough time-passer, but it remains more interesting as a concept than as a fully realized human experience. The characters, for all the changes in their lives, look and act the same in the mid-1990s, when the O.J. Simpson case was distracting sports fans, as they do in more recent times. Despite their being at basketball games, they talk in ordinary conversational tones, becoming loudly vocal only when there’s something to bitch about in the game. Much like the tone in “The Sky and the Limit,” the talk is mostly passionless and dry, which can also be said for the final play, “Riverbed.” 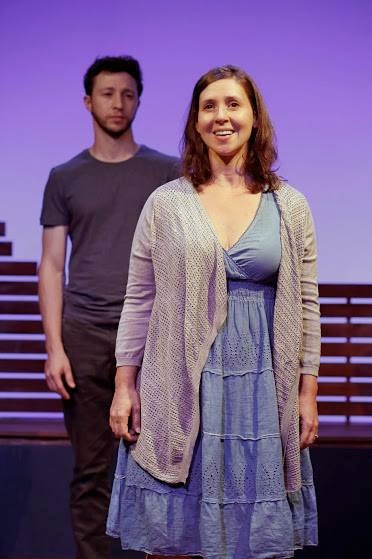 Adam Green, Miriam Silverman. Photo: Carol Rosegg.
In that piece, by Eric Lane, and directed by Matthew Rauch, we see a young married couple, Adam (Adam Green) and Megan (Miriam Silverman), who've been living an idyllic life in a house set on a riverbank. His profession isn’t mentioned but she’s an art history professor at a local community college. One Saturday morning, while she was teaching an adult ed class on Caravaggio’s “The Beheading of St. John the Baptist” and Adam was home caring for their young children near the dock, he turned for a moment to see a deer and, when he turned back to the dock his daughter, Lucie, had disappeared. Adam and Megan tell us all this, and then recount the aftermath, how the police came to her class to report the accident, the unsuccessful search for the child, the “what ifs” they couldn’t help asking, and how they coped with the loss, including the issue of forgiveness.

The vast majority of the dialogue is in the form of direct address, much of it in the present tense (“We do this,” “I do that,” and so forth) with only sporadic moments during which Adam and Megan speak to one another. It is, in fact, more like the reading of separate but related diaries than a play in the conventional sense. The writing is sensitively poetic and delicate but terribly restrained, just like the actors delivering it, as they speak with buried emotions, almost smiling in their effort to demonstrate their self-control. Feelings are talked about, but remain largely unexpressed, hinted at but more to be imagined than experienced. All well and good, but like so much else during the evening, fine actors have been reined in by their director and given no opportunity for passionate expression. I was especially disappointed to see such a polite performance from Ms. Silverman, who was so powerful in last year’s FINKS at EST.

SUMMER SHORTS, Series B, will offer three more one-acts, by Daniel Reitz, Neil LaBute, and Albert Innaurato. I look forward to quality writing, of course, and hope the productions will have some of the emotional lightning that failed to strike in Series A.
Posted by Samuel L. Leiter at 6:08 PM