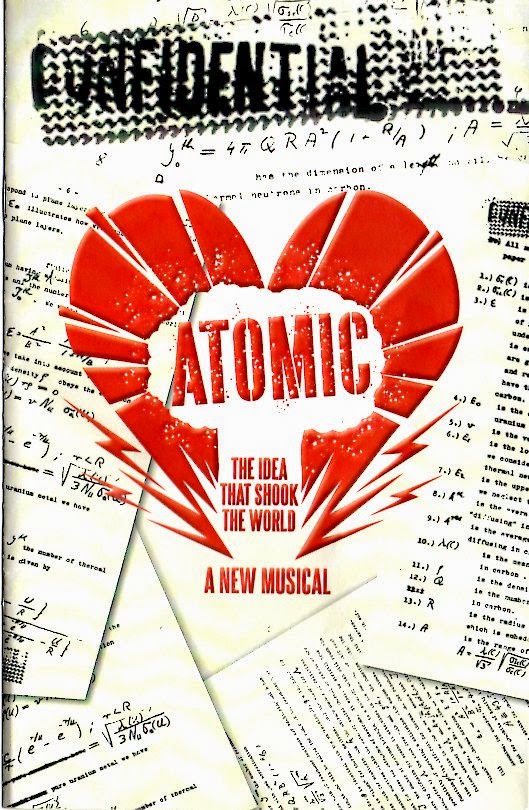 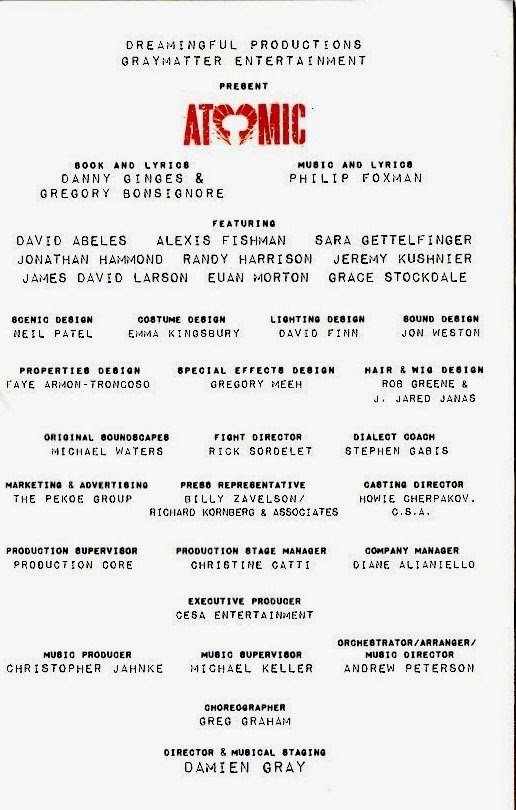 Usually, when an explosive device fails to go off we call it a dud. On the other hand, when a show turns out to be a dud we often call it a bomb. You can use either word to describe ATOMIC: THE MUSICAL, a new show (originally produced in Australia) at the Acorn Theatre, directed by Damien Gray, about the development of the A-bomb. The notion of musicalizing the multifaceted story of the Manhattan Project, which created the bombs that devastated Hiroshima and Nagasaki, is not a new one. As recently as 2005, DR. ATOMIC, John Adams and Peter Sellars’s generally well-received opera about the bomb, which focuses on scientist J. Robert Oppenheimer during the project’s last days, premiered at the San Francisco Opera House, followed by several other productions, including one at New York’s Metropolitan Opera in 2008. ATOMIC, which should have chosen a title less reminiscent of the opera, examines the story mainly from the viewpoint of Leo Szilard (1898-1964), the Hungarian-born Jewish physicist who studied under Albert Einstein in Germany, which he fled in 1933, and who came to New York in the late 1930s to take a position at Columbia University. 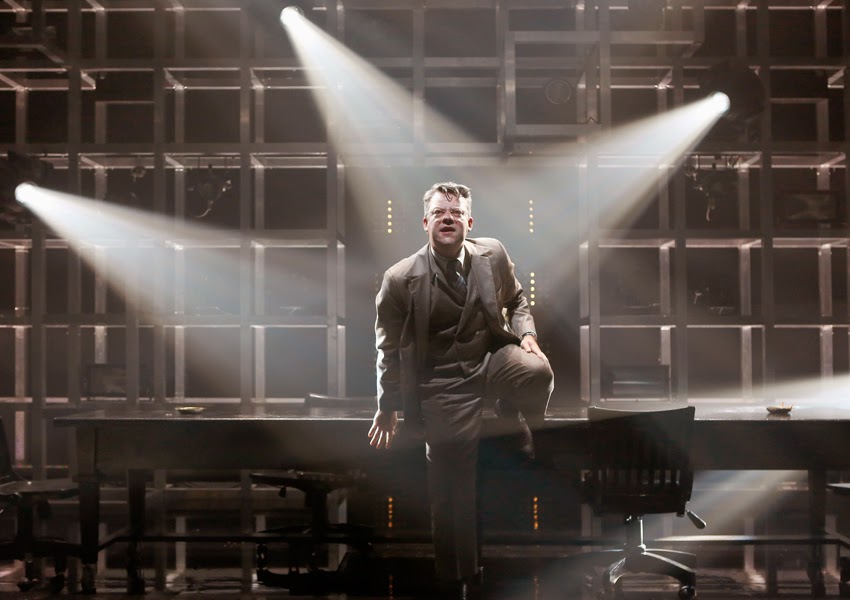 Jeremy Kushnier. Photo: Carol Rosegg.
Szilard (Jeremy Kushnier), who discovered how to create the chain reactions that made the atomic bomb possible, was one of the less well-known Manhattan Project scientists, which included such geniuses as the German Edward Teller (Randy Harrison) and the Italian Enrico Fermi (Jonathan Hammond), not to mention Oppenheimer (Euan Morton). He was outspoken in his belief that the principles of atomic energy should be used not for mass destruction but for mankind’s good. But he was caught up in the frenzy of a project that had to race against the clock to create the A-bomb before it happened in Germany, which had an even more advanced nuclear research program. He believed that once America had created the bomb it would be able to defeat Germany by simply revealing its existence. The fact that Szilard and so many of his peers were Jewish made their race to defeat the Nazis even more urgent. When Germany surrendered even before the bomb was completed, Szilard thought there’d be no use for the bomb, and was sorely distressed when it was dropped on Japan. Whether this was the right decision or not remains a hotly debated question, and is visited toward the end of ATOMIC, but despite all the serious issues and complex personalities forming the background to this story, the show remains mired in banalities and inconsequential personal matters, many of them surrounding Szilard’s relationship with Trude Weiss Szilard (Sara Gettelfinger), a pediatrician. For some reason, the play shows them as married, but that didn’t take place until 1951. 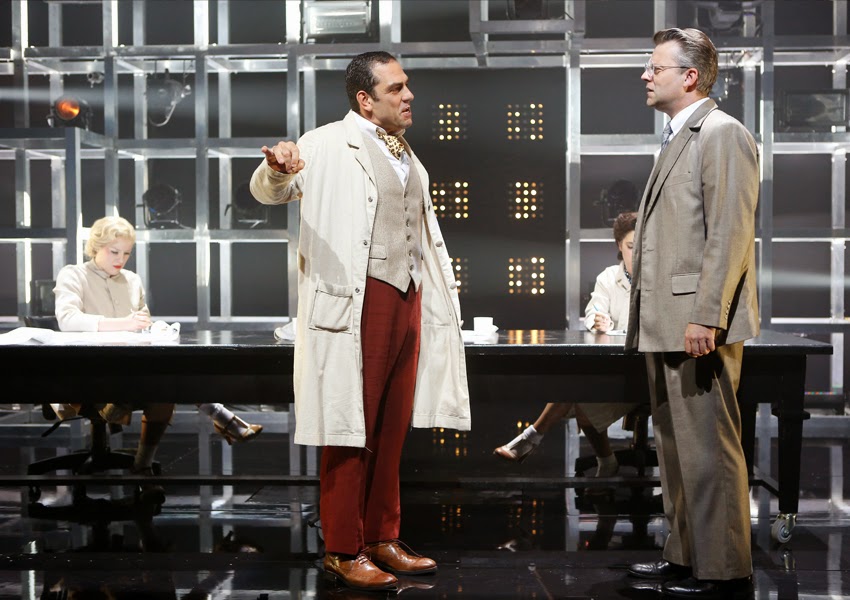 
Unlike the tighter focus of DR. ATOMIC, this episodic show—with book and lyrics by Danny Ginges and Gregory Bonsignore and music and lyrics by Philip Foxman—covers the immediate prewar years, as well as the years during World War II when the Manhattan Project was born in New York, moved to Chicago, and grew to immense size. An attempt is made to hold it together by framing it within the context of the 1954 hearings during which Oppenheimer (Euean Morton) faced a Congressional hearing that stripped him of his security clearance because of his communist sympathies. This sometimes seems, though, more an opportunity to introduce Oppenheimer’s unusual persona—shown here as a pedantic pontificator with a streak of showmanship—than to elucidate Szilard’s story, which was not the subject of the hearings. Randy Harrison, Jeremy Kushnier. Photo: Carol Rosegg.
Another frame is provided by an opening scene showing a Japanese couple in Hiroshima having a quiet morning conversation (in their native tongue) when—BAM!—a blast of white light and noise indicates they’ve been evaporated. Toward the end, this scene is repeated at somewhat more length, but the explosion is accompanied by a slow-mo choreographed scene (staged by Rick Sordelet) in which, amid the bright lights, Szilard is seen physically annihilating the couple (Bam! Pow! Crunch!, it almost seems to shout), as in a guilty nightmare where he feels himself responsible for their deaths. The show doesn’t end here, though, and continues wrapping up loose ends for at least another 10 minutes. At nearly two and a half hours (with one intermission), these scenes only extend a show that has long overstayed its welcome, never having demonstrated why it was necessary to make a musical of this historically interesting but not especially theatrical material. Chain reactions, radiation, protons versus neutrons, thermodynamics, anyone? 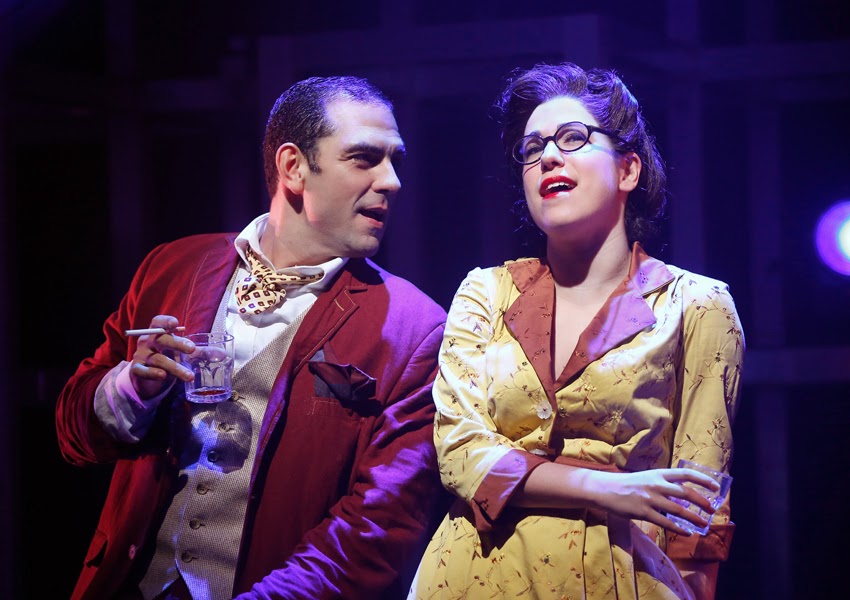 Jonathan Hammond, Alexis Fishman. Photo: Carol Rosegg.
Although music dominates the show, there are a significant number of spoken scenes that, had they been sung, might have qualified ATOMIC as a rock opera. Apart from a couple of songs, such as Enrico Fermi’s “America Amore” and the Andrews Sisters-like “The Holes in the Donuts,” sung by a trio of women (Sarah Gettelfinger, Grace Stockdale, and Alexis Fishman) dressed like Rosie the Riveter, the show is a series of big-voiced, familiar-sounding rock anthems, most of them filled with platitudinous and heavy-handed lyrics that sometimes rhyme and sometimes don’t. The “Donuts” number, choreographed by Greg Graham, is suggestive of a more appealing stylistic direction the show might have taken by using pastiche numbers influenced by wartime tunes. 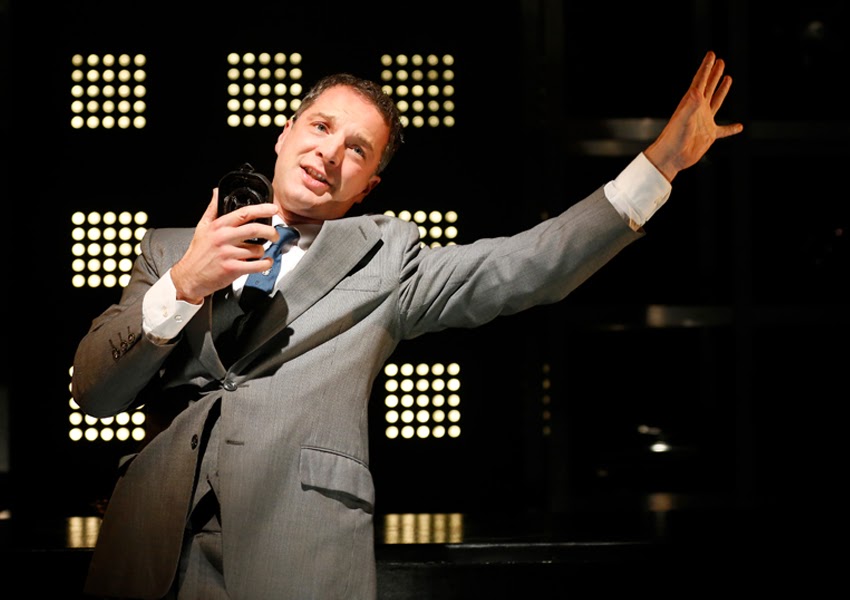 Euan Morton. Photo: Carol Rosegg.
A neutral setting of open-framed boxes, designed by Neil Patel to suggest the periodic table, allows for the many scenes to move quickly from one to the other without the need for cumbersome set changes; a long, six-legged table on wheels, moved about by the actors, figures in nearly every scene. The set allows for a myriad of rock concert-like lighting—strobes included—by David Finn, but even with all the light cues the visual elements eventually become dull and repetitious. Emma Kingsbury’s period costumes are generally effective, especially the Rosie the Riveter clothes, and Fermi’s reddish suit stands out, but not much else in this department is especially memorable. The white silk negligee worn in one scene by Trude, attractive as it is, seems decidedly out of character. 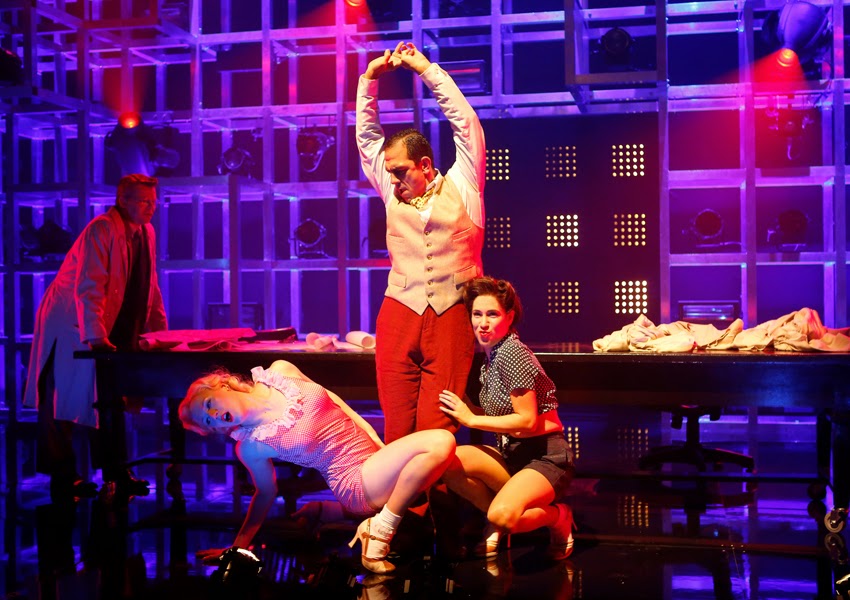 Photo: Grace Stockdale, Jonathan Hammond, Alexis Fishman. Photo: Carol Rosegg.
Given the dimensions of the subject matter, it’s clear that numerous shortcuts had to be devised to tell the story. The number of characters had to be greatly pared down, the scientific jargon reduced to a minimum (although there are several mouthfuls to digest), the personalities simplified, and some comic relief inserted. This means, for one thing, that important historic figures are caricatured rather than treated seriously, most egregiously Fermi, depicted as an oversexed, Italian-accented refugee who seems more interested in being in America because of its sexual opportunities than for the opportunity to pursue his scientific interests.
The cast, in good voice, sings its collective heart out, and, given the drawbacks of the material, does its best at making the characters lively, if not believable. Szilard, unlike Oppenheimer, is not the most charismatic physicist around whom to construct a rock musical, although Mr. Kushnier does a fine job in the role. Lurking in the story, however, is someone who, though her story is important for other reasons, might be worth the effort of dramatizing it (but not necessarily making it into a musical!). This is Leona Woods (Alexis Fishman), the only woman on the Manhattan Project team. Putting her life on the stage might create the right sort of theatrical chain reaction.
Posted by Samuel L. Leiter at 12:00 PM