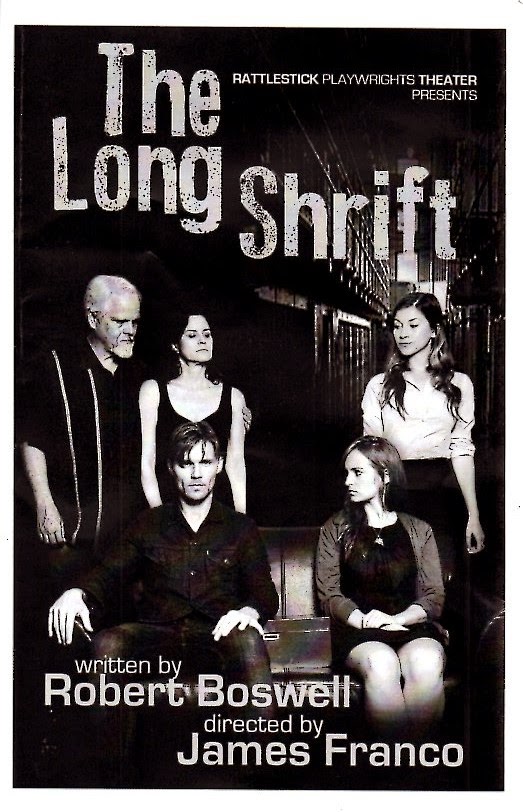 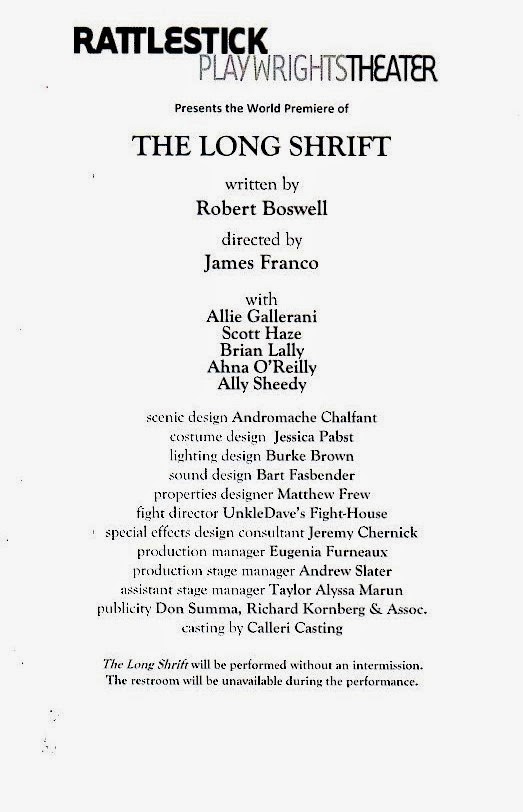 Given his status as one of the hottest (and most controversial) film and theatre entities on the planet, it seems appropriate to assume that James Franco—currently starring on Broadway in OF MICE AND MEN—could, if he wished, have had his pick from a large pool of new plays with which to make his Off Broadway directing debut. Unfortunately, the one he happened to choose, novelist Robert Boswell’s THE LONG SHRIFT, which opened the other day at the Rattlestick, is a static, generally lifeless, and clumsily composed slice-of-life drama in the pseudo-Sam Shepherd tradition about the potentially potent subject of high school rape. It’s torpidly staged with scant imagination and nary a shred of theatrical urgency, and acted with flat-line monotony that only now and then blips into life. If my wife had gone with me she’d have been saying someone should stick a pin in these actors. 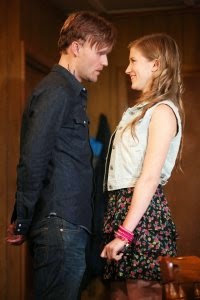 Scott Haze, Allie Gallerani. Photo: Joan Marcus.
Much is made in the media about Mr. Franco’s polymath interests, his program bio noting that he is “an actor, director, screenwriter, producer, teacher and author.” This makes him sound like the second coming of Orson Welles. To add to the many academic programs he’s been enrolled in, I’d recommend graduate courses in directing. His Wikipedia entry touches on his several other talents, none of which, however, have been put to very good use in THE LONG SHRIFT. Had he himself played the leading role, though, instead of the ineffably boring Scott Haze (who has appeared in several of Franco’s films), perhaps the stultifying evening might have had more dramatic interest than it does. That might have meant using another director, of course, which would have been all to the good, as Mr. Franco is no Orson Welles. 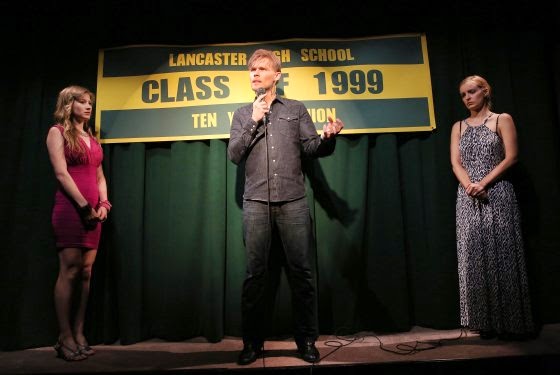 Annie Gallerani, Scott Haze, Ahna O'Reilly. Photo: Joan Marcus.
The gabby play runs 95 minutes, without an intermission, although at least four or five spectators, regardless of the discomfort to themselves and others, squeezed their way through the narrow rows to take their leave well before the final curtain. Most of the action takes place in a seedy, faceless, tiny, Houston apartment (designed by Andromache Chalfant), cheaply paneled and with a standard hollow wooden door that never seems to close properly. (The Rattlestick has a penchant for such cruddy locales.) This “hovel,” as they call it, is where Sarah (Ally Sheedy) and Henry (Brian Lally), have been forced to move after selling their house to pay the legal costs of defending their son, Richard (Mr. Haze), when, at 18, he was accused of raping the homecoming queen at Lancaster High School. For this assault, if it actually happened as reported, he spent five years in prison before the girl recanted her story and his sentence was reduced. When the play begins, not long after Richard’s incarceration, the cynical Sarah and Henry, a feckless Viet Nam vet, bicker over their perceptions of Richard’s guilt. Sarah, who won’t even visit Richard in prison, believes he did it and Henry stands up for his son.
The main action begins in the second scene, set ten years later, just when Lancaster is preparing a 10th year reunion for the class of 1999. Richard has recently moved in with his widowed dad. Who should show up at the apartment but Beth (Ahna O’Reilly), the rich girl whose testimony sent the working-class Richard to jail and who, for reasons to be uncovered, did an about face and got him released. Having suffered the consequences of the trial and his conviction, Beth—who’s greeted with a faceful of whiskey—seeks forgiveness, redemption, or whatever, although the incessantly simmering Richard refuses to hear what she has to say. Another visitor soon arrives, this being the attractive, enthusiastic, but rather oblivious Lancaster student body president, Macy (Allie Gallerani), in charge of the reunion; I’d like to know, by the by, in what high schools students are allowed to run reunions. Her dimwitted idea is to have Richard—his notoriety makes him a celebrity, doesn’t it?—be the keynote speaker. (She’s airheaded enough to let him put a move on her.) And Beth, naturally, will share the stage with him. Further, she agrees to do so wearing a dress of Richard’s late mother. This is only a sample of the improbable and implausible writing raging through Mr. Boswell’s play.
Richard’s speech—held before a curtain with a reunion banner on it—turns out to be a disaster during which he removes his shirt to reveal a large black swastika tattoo on his chest, a sign of the rites of passage prison life required. The lack of any strong negative reaction from the invisible crowd of former students and teachers to his diatribe against their failure to support him is yet another dramaturgic puzzle.
The play also indulges in a totally unnecessary dream scene between Henry and Sarah, played in green light, in the middle of which there’s a flashback, all of which seems amateurish and unnecessary. Burke Browne’s lighting, here and throughout, is decidedly inferior, with the actors’ faces frequently being so poorly illuminated as to make their expressions indecipherable from my seat at the rear of the theatre. This, too, must ultimately be laid at Mr. Franco’s door.
The play concludes with its only truly dramatic confrontation as Beth and Richard air their issues, but all this does is suggest the play that might have been, and the theatrical tension that should have driven the action from the start. There are valuable ideas hiding amidst the problematic writing, especially concerning the effects of rape accusations on victims and alleged perpetrators. Just yesterday, the front page of the New York Times ran a major story on a college rape and its aftermath: http://www.nytimes.com/2014/07/13/us/how-one-college-handled-a-sexual-assault-complaint.html?_r=0.
Hopefully, Mr. Franco will direct for the stage again, if only in an effort to wipe the slate clean and start afresh.
Posted by Samuel L. Leiter at 7:44 PM