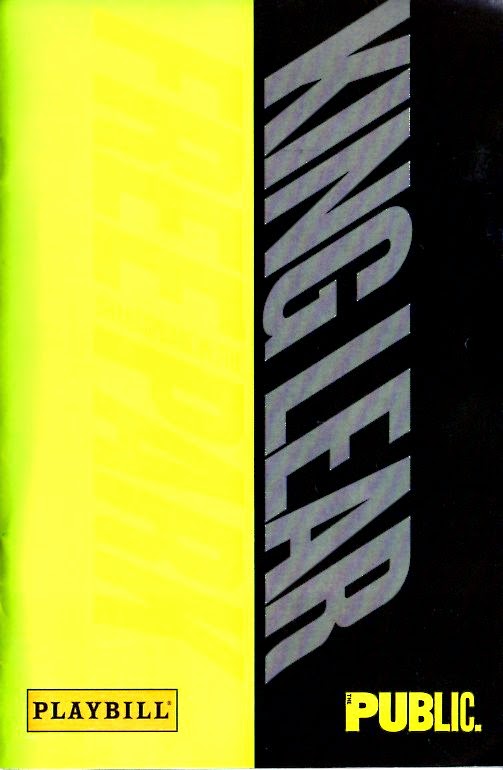 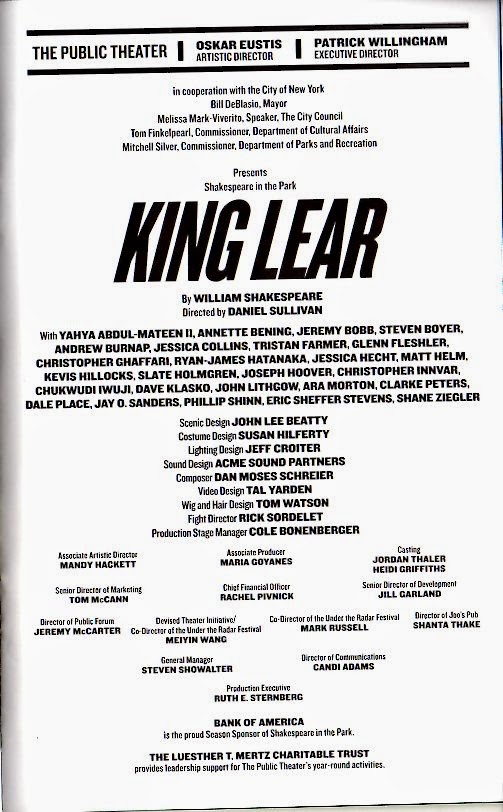 Seeing New York’s third major KING LEAR of the year, following productions starring Frank Langella and Michael Pennington, I couldn’t help thinking of Tom’s final line in THE GLASS MENAGERIE, “nowadays the world is lit by lightning! Blow out your candles, Laura—and so good-bye.” It didn’t rain during the performance I attended at the New York Shakespeare Festival in Central Park (it did, though, heavily, on July 27), but there were plenty of theatrical thunderbolts tossed, and the play, as in any good revival, illuminated once again the horrors of which humankind is capable. 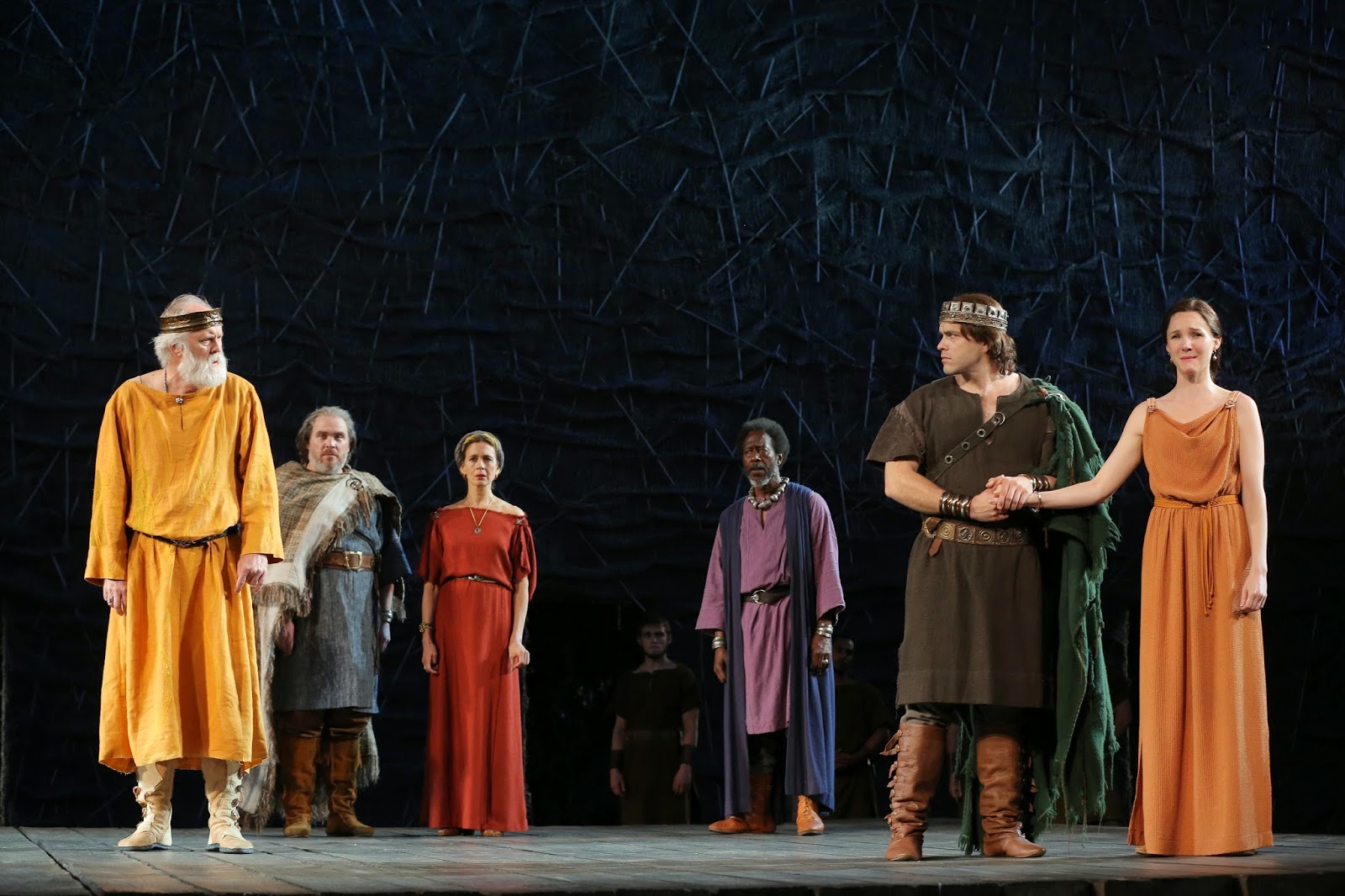 
Greed, corruption, betrayal, pride, lust, cruelty, mendacity, credulity, arrogance, and the like march side by side through this epic portrayal of familial dysfunction and pervasive evil. Edmund, Gloucester’s wicked bastard son, pointedly expresses the idiocy of blaming our misfortunes on planetary influence:


This is the excellent foppery of the world, that,
when we are sick in fortune, —often the surfeit
of our own behavior, —we make guilty of our
disasters the sun, the moon, and the stars: as
if we were villains by necessity; fools by
heavenly compulsion; knaves, thieves, and
treachers, by spherical predominance; drunkards,
liars, and adulterers, by an enforced obedience of
planetary influence; and all that we are evil in,
by a divine thrusting on: an admirable evasion
of whoremaster man, to lay his goatish
disposition to the charge of a star!
The culprit is man himself, and the often foolish choices he makes as he clambers through life. Very few characters in KING LEAR don’t contribute mightily to their own problems, no matter how “good” they are on the moral spectrum. Consider Lear’s ridiculous decision to disown his beloved Cordelia, Cordelia’s stubborn idealism in refusing to pamper the old king, Kent’s incessant and impolitic brusqueness, Goneril and Regan’s overwhelming selfishness, Edmund’s filial and fraternal treachery, Edgar and Gloucester’s blind gullibility, Cornwall’s inhuman sadism, and Oswald’s slavish loyalty. Gloucester may say, “As flies to wanton boys are we to the gods. They kill us for their sport,” but there’s no escaping our own culpability in our fates. Thus goes the world, which, once again we see going to hell in a hand basket every time we turn on the TV or computer, or pick up a newspaper. And thus it is in KING LEAR. It’s no wonder the old man goes nuts. 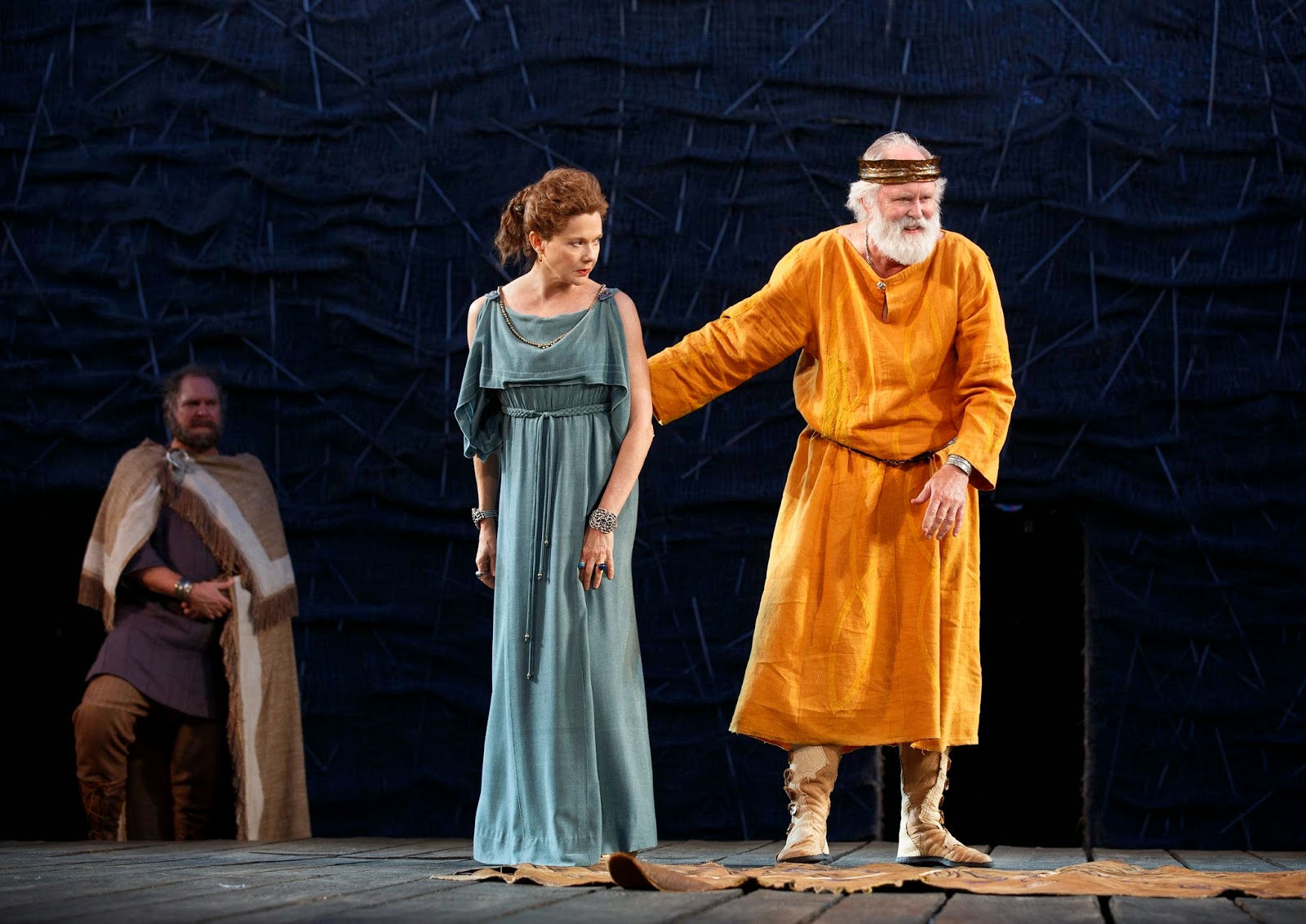 
Dan Sullivan’s compelling two-act production at the Delacorte, running three hours (it ends at 11:10), avoids gimmickry, doing nothing drastic to alter the text or ambience of Shakespeare’s dire tragedy. This is a straightforward classical revival performed on John Lee Beatty’s uncluttered unit set, consisting of a large wooden platform, set on an angle, with short flights of steps at the front and sides, backed by a long wall punctuated by five doorways. The wall’s textured surface seems to have had thousands of oversized pick-up sticks flung against it. Jeff Crozier’s multifaceted lighting design, combined with Tal Yarden’s imaginatively abstract video projections (including fiery battles seen off in the distance), make the most of this wall, whose patterns keep changing in keeping with each scene’s mood. 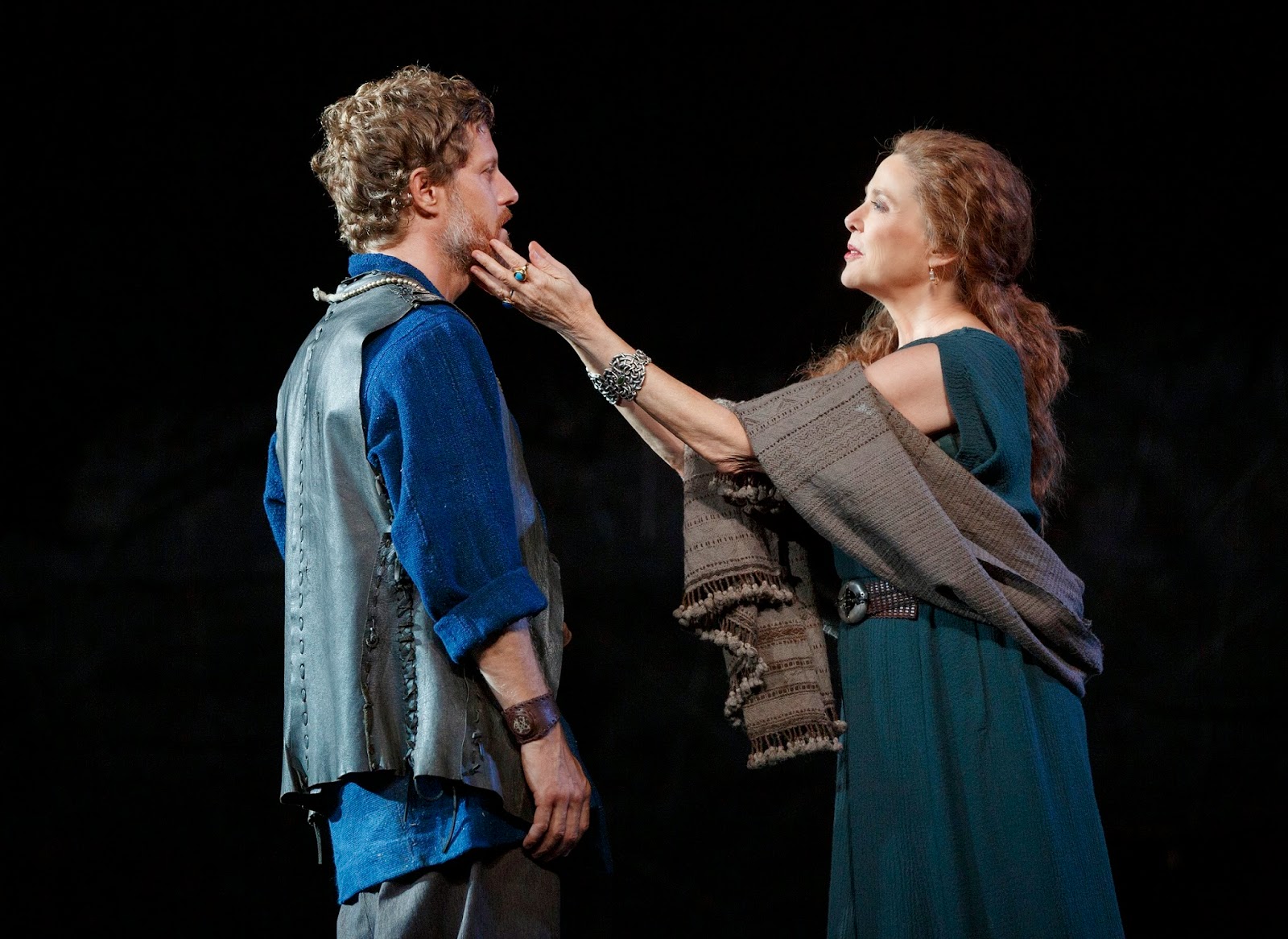 
Within Mr. Sullivan’s clear-cut rendering, Mr. Lithgow is very real, very human, and very touching as the octogenarian Lear. Looking every inch the king, with his fringe of white hair and full white beard, he first appears as a benign figure, in contrast to the more authoritarian ruler Frank Langella provided, but when he’s unable to get Cordelia to fawn over him like her sisters, his anger grows and we begin to see the powerful but annoyingly petulant ruler. The business with the map is the conventional one of a large leather skin tossed on the floor, with Lear using a piece of chalk to divvy up the land.
Mr. Lithgow offers no notably original interpretive decisions, just a solid, sturdy, transparent, clearly articulated, and convincing portrayal, with countless insightful and appropriate readings that make sense of every line. The mad scene, so awesomely difficult, is consistently gripping and believable, as are all the big tragic moments, from the scene in the storm to the death of Cordelia. Despite a problematic back that had to be worked on during rehearsal by a physical therapist, he doesn't falter when he carries on Cordelia's corpse (Mr. Langella had to drag her on), nor does he seem hampered by any other of the role's many physical demands. Lithgow’s tall, slightly stooped posture becomes ever more pathetic and diminished as he dwindles into madness, tearing off his clothes and wrapping himself in a shabby cloth, becoming, like, Poor Tom, “unaccommodated man.” 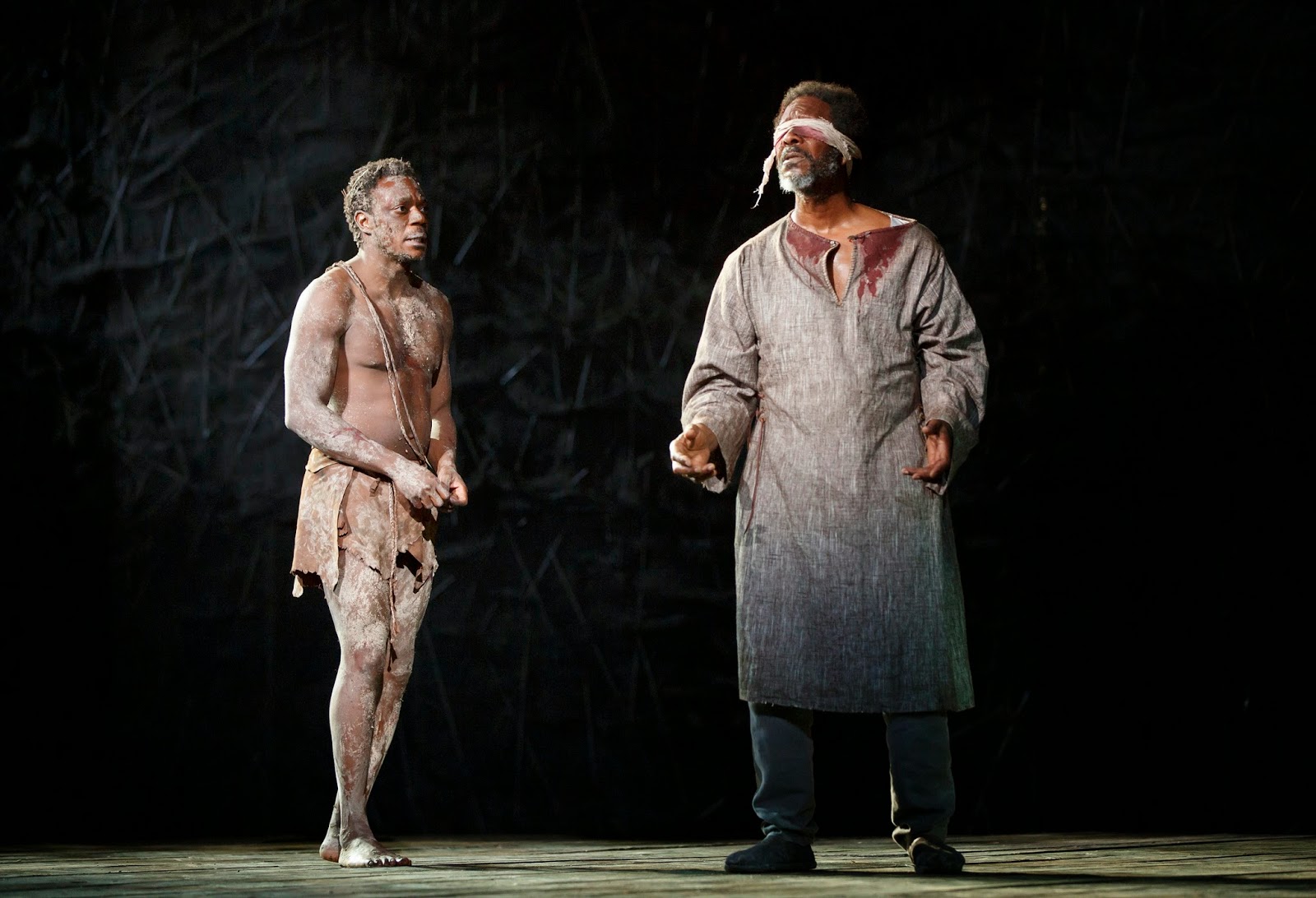 
The role of the Fool is probably one of the greatest challenges to an actor. Let’s face it, Lear’s Fool is simply not funny anymore and actors typically have to resort to sprightly antics, with directorial gimmicks added, to try and squeeze laughs out of archaic lines that only Shakespeare addicts appreciate. Steven Boyer, so brilliant recently in HAND OF GOD, proves very adept in the role, not because he makes you laugh (the audience titters sound obligatory) but because his Fool is so human. In his total commitment to Lear’s well-being he’s one of the few ethically pure characters on the stage. Mr. Boyer, whose short stature in contrast to Mr. Lithgow’s height helps to emphasize the Fool’s childlike qualities, speaks with Lear’s best interests in mind, even when Lear ignores him, and a genuine affection between the two emerges. Except for a few moments of physical comedy, Mr. Boyer doesn’t exaggerate the Fool’s behavior for comical effect, and his own plight thereby becomes moving because he's more a person than a device. 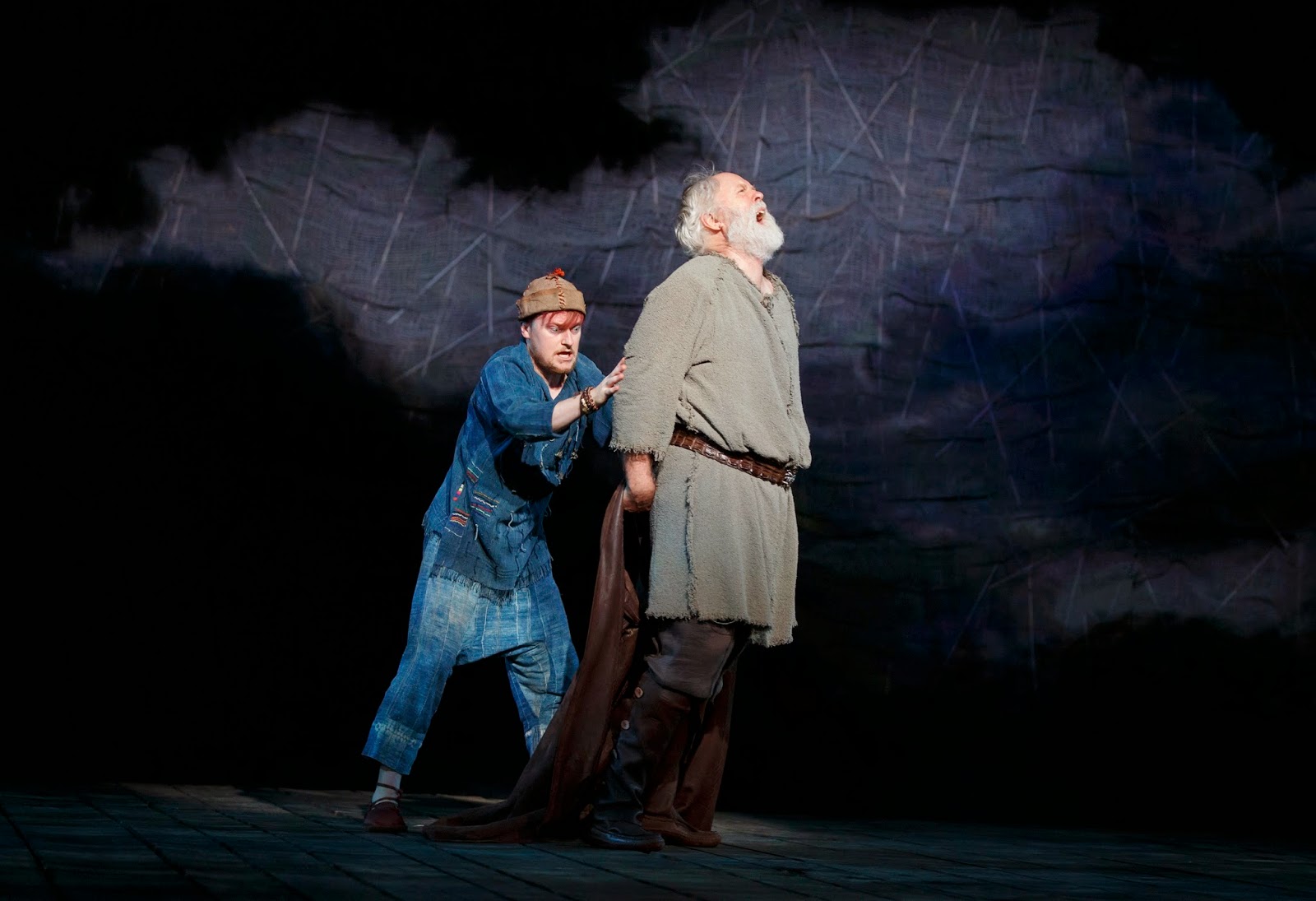 Steven Boyer, John Lithgow. Photo: Joan Marcus.
Jay O. Sanders, one of New York theatre’s finest and most consistently reliable actors, offers the best Kent I’ve ever seen. He takes full advantage of the man’s proclivity for excessive candor, but he does so with an honesty, likability, and humor that make Kent far more than the brutally frank and one-sidedly angry warrior we often see. With his burly physique and spirited presence, he makes every word of Kent’s ring true. Kent’s diatribe against Oswald is a masterpiece of putdown artistry in Mr. Sander’s performance. 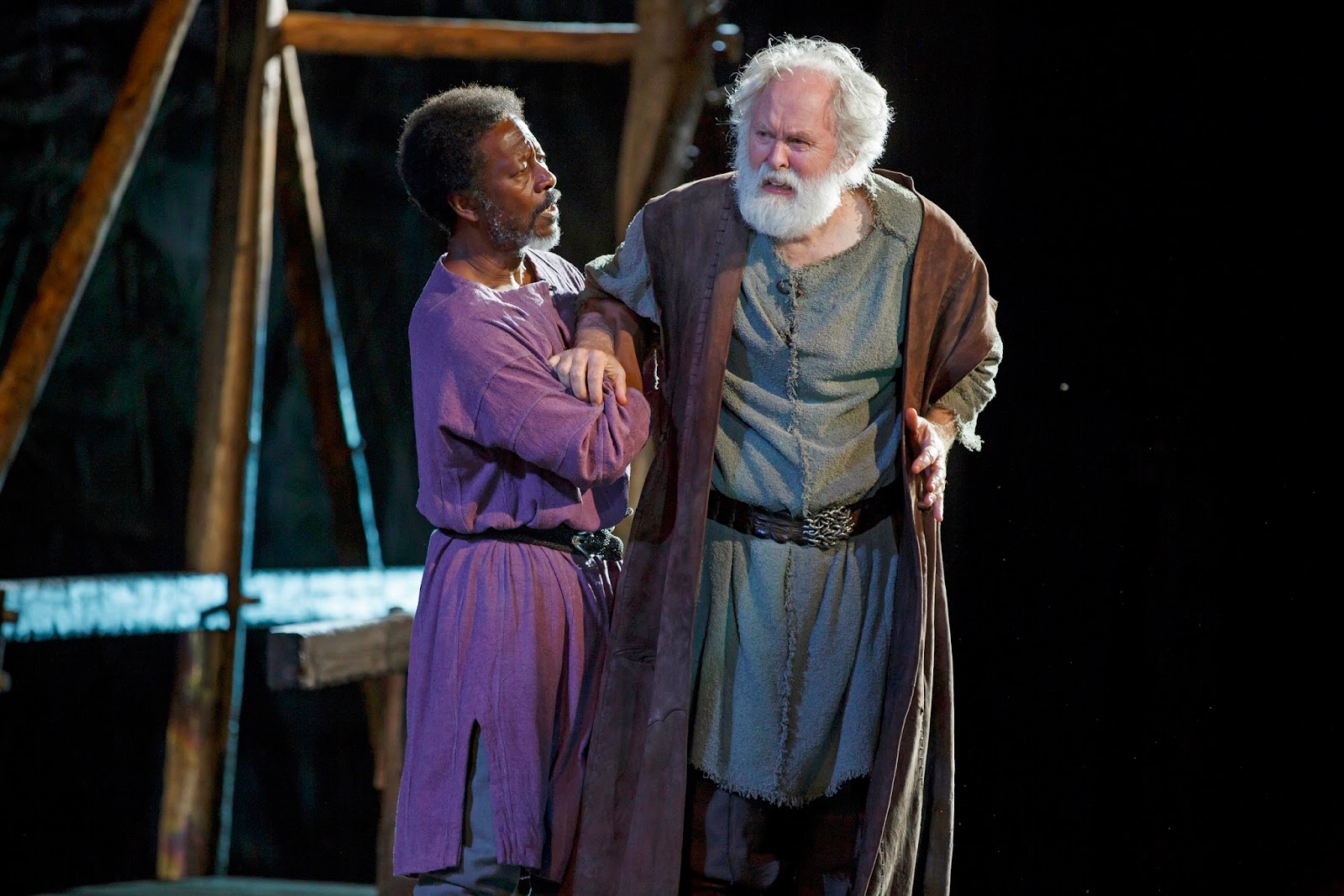 
Chukwudi Iwuji gives a superb reading of Edgar, especially in his Poor Tom guise, and Eric Sheffer Stevens is an acceptably villainous Edmund, although Chandler Williams in the Langella revival and Max Bennett in the Pennington brought more charisma to the role. As Gloucester, the father of Edgar and Edmund, Clarke Peters displays a sonorous voice but he fails to bring much more than dignity and solemnity to the role. 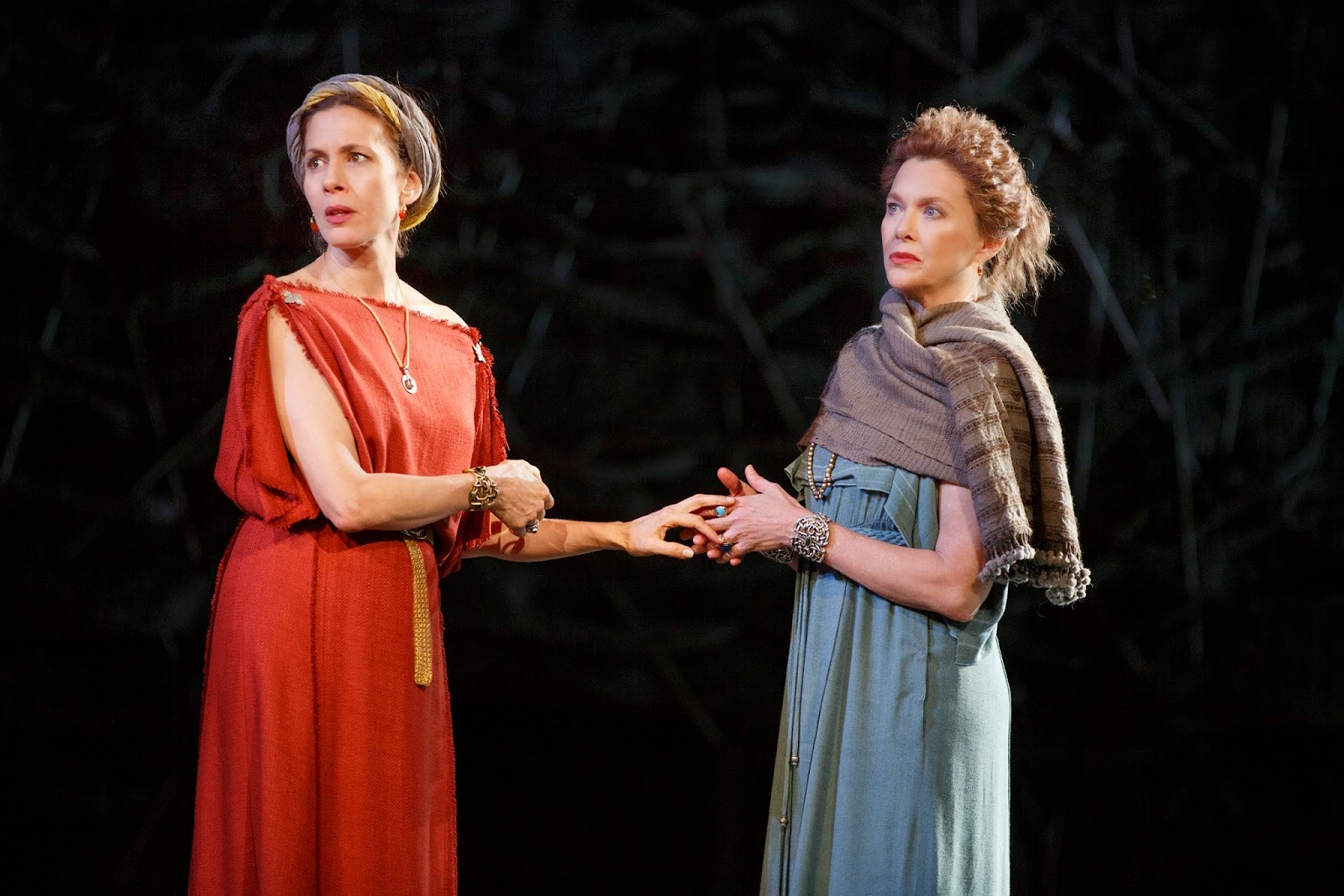 
The biggest disappointments are the two award-winning stars cast as Goneril and Regan, Annette Bening and Jessica Hecht. Ms. Bening, whose slightly raspy voice suggested that she may have been recovering from a cold, is, as usual, lovely, but her Goneril hasn’t many notes, and lacks interesting nuances. The spindly Ms. Hecht, on the other hand,  seems to have wandered in from another era and another play, bringing her well-known quirky mannerisms of voice and movement to the nasty Regan. The laughs she sometimes inspires seem oddly out of place. 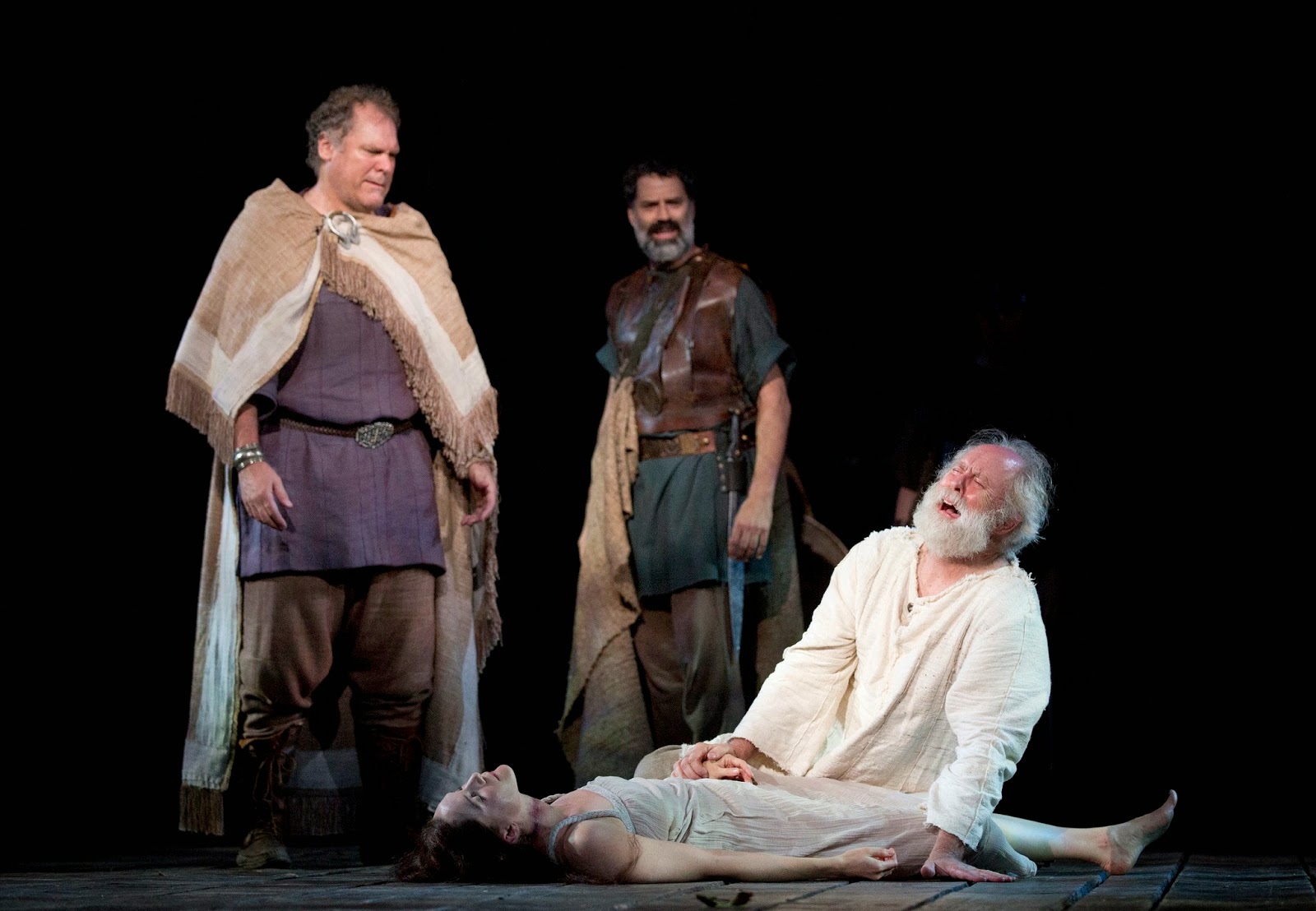 
The remaining cast members are all satisfactory, and the ensemble is strong enough to overcome individual acting gaps. 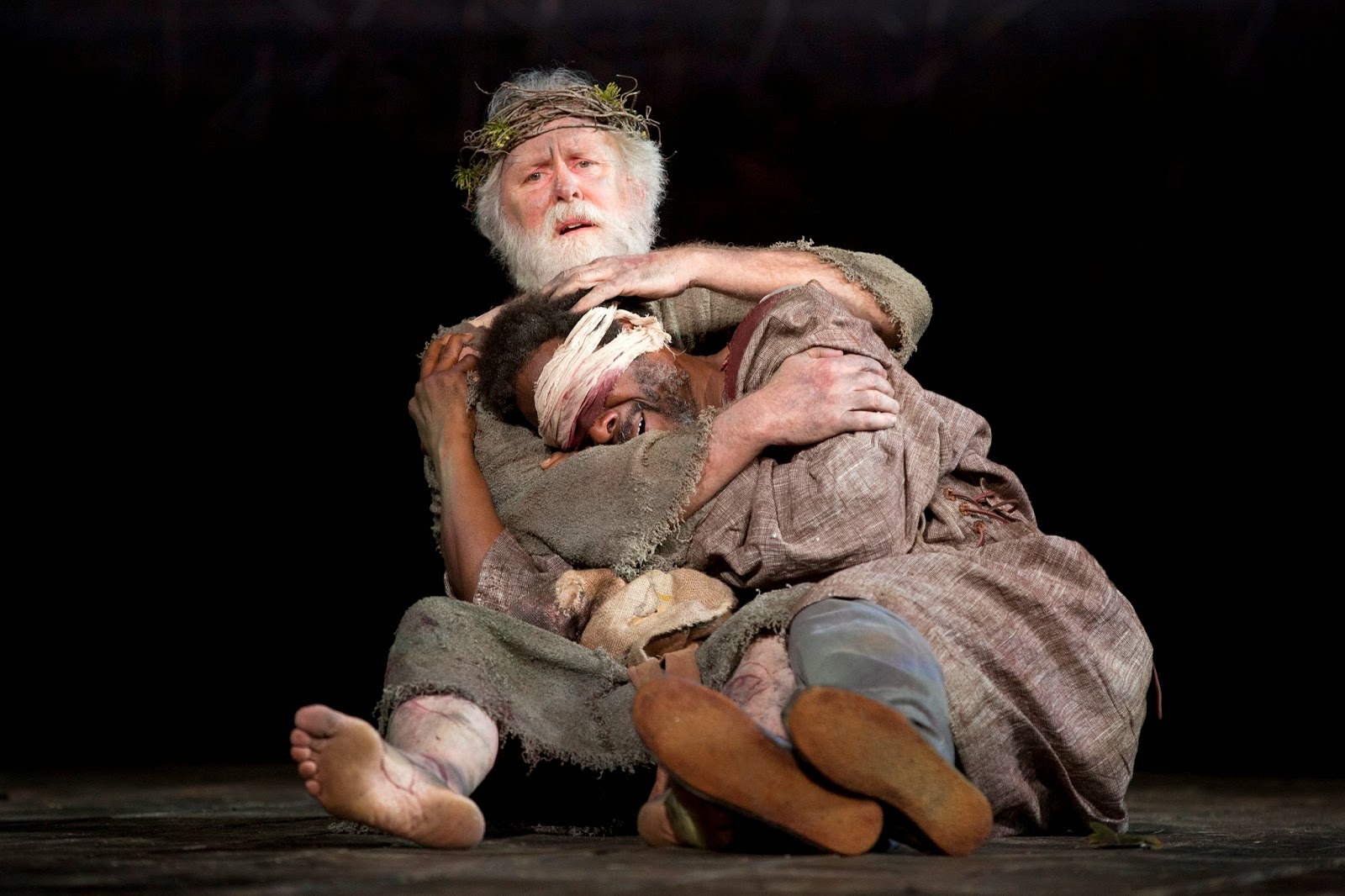 John Lithgow, Clarke Peters. Photo: Joan Marcus.
Susan Hilferty has dressed the production in rough-hewn cloaks and tunics of some generalized medieval time, with Regan, Goneril, and Cordelia, as is common, given simple floor-length gowns, each in a single color. While not being especially novel, the visuals are faithful to the traditional image of the play, an image greatly enhanced by the powerful sound design of Acme Sound Partners and the atmospheric dissonance of  Dan Moses Schreier’s music.

Rick Sordelet provides his usual expertise in staging the violence, although, from what I'd read, I expected the blinding of Gloucester to be more bloody. A Wall Street Journal article discussed how blood would spurt all over Regan, but all I saw on her white gown (a color obviously chosen for the purpose) was a small splotch of red near the neckline. There's a lengthy, complex duel with multiple weapons between Edmund and Edgar, but I rarely find such theatrical combats more than stylishly choreographic exercises lacking in any sense of real danger, apart from what might happen if an actor zigged when he should have zagged. The most convincing stage fight I’ve ever seen was in Franco Zeffirelli’s early 1960s ROMEO AND JULIET for the Old Vic, during the Tybalt-Mercutio-Romeo brawl. Zeffirelli did his own fight scenes. I was spoiled for life.


The Central Park production of KING LEAR is, surprisingly, the first there since James Earl Jones tackled the lead in 1973, at age 42. The 68-year-old Mr. Lithgow, who has been blogging about his experience, worried that he was perhaps too young to play the aged king, but he had nothing to worry about. The production around him may not be perfect, but his performance is mightily good; in this Year of Lear, Shakespeare in the Park gives us the most satisfying version yet.
Posted by Samuel L. Leiter at 5:27 AM