49. BETWEEN RIVERSIDE AND CRAZY 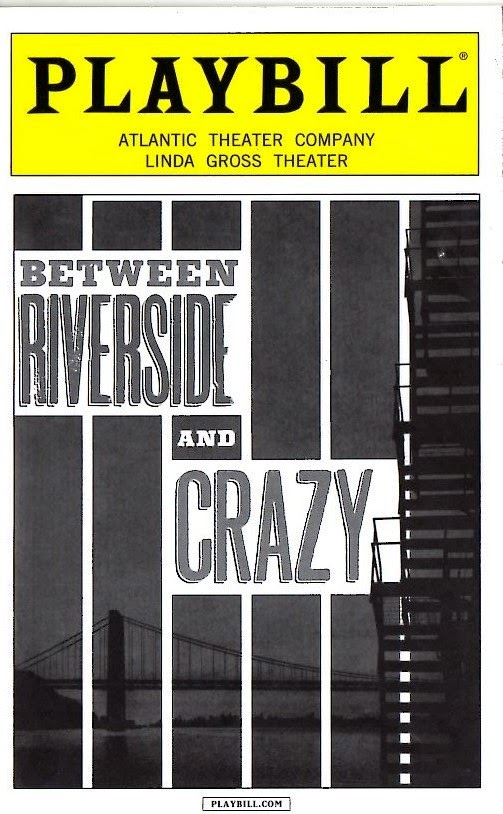 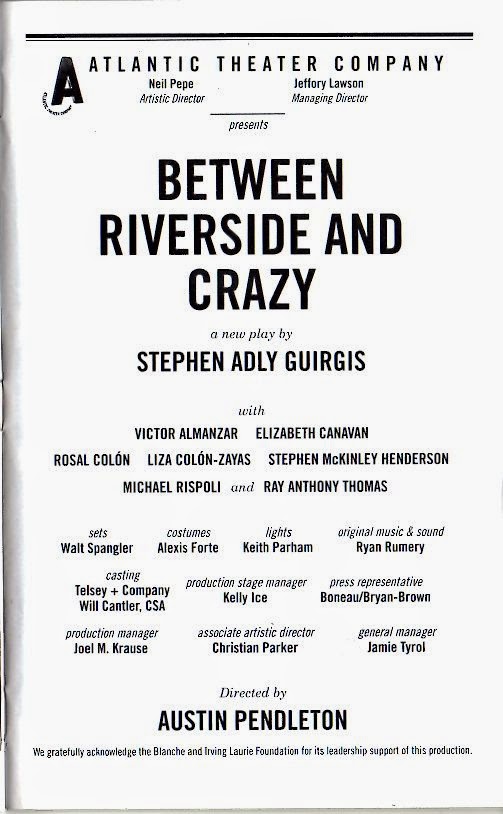 On Saturday night, two no-hit bids were foiled in the seventh inning during the Mets-Giants game at Citi Field. Over at the Atlantic Theatre, Stephen Adly Guirgis’s BETWEEN RIVERSIDE AND CRAZY was taking a theatrical no-hitter even further into the evening, but as the play neared 10:00 p.m. the playwright faltered slightly. The no-hitter was over but Mr. Guirgis still came out a winner. His play, despite a too soft final inning, leaps directly onto the short list of the young season’s best new work, both for the distinctive quality of its writing and the all-around excellence of its production. And, in Stephen McKinley Henderson’s portrayal of Walter “Pops” Washington, it boasts a towering performance worthy of award consideration. The first thing that happens in Austin Pendleton’s expertly realized staging is that the expansive Riverside Drive apartment on New York’s Upper West Side, one room of which we’ve been staring at since taking our seats, begins to slowly revolve, revealing Walt Spangler’s intricately designed set of high-walled, interlocking rooms. It provides an instant impression of why this “palatial” home, despite its rundown condition, is so desirable and why it is, in essence, as much a character as any of the people in the play. When it stops moving, we see the eat-in kitchen, at whose table the overweight, bathrobe-clad, booze-loving, recently widowed Walter, a retired African-American cop, is seated in a wheelchair and conversing with a much younger Hispanic man, Oswaldo (Victor Almanzar). Oswaldo is a close friend of Walter’s ex-con son, Junior, and is staying here rent-free while he tries to get his act together. The middle-aged Junior (Ray Anthony Thomas) also lives here, as does his sexpot girlfriend, Lulu (Rosal Colón).


Despite the wheelchair, which he uses for comfort, not mobility, Walter is perfectly ambulatory; this is just one of many things in the play that show how what we often assume to be one thing turn out to be the other. As Lulu says to Walter: “I may look how I look—but that don’t mean I AM how I look!”


The apartment, in which Walter has lived since 1978, is rent-controlled and, while Walter pays $1,500 a month rent for it, the landlord can get ten times that amount if he finds a way to remove its tenant. Eight years earlier, Walter, while off duty in a sleazy bar during the wee hours of the morning, was shot six times by a white rookie cop. His injuries forced him to retire, and he’s been suing the city ever since, refusing any settlement, insisting that the shooting was racially motivated and that the shooter had called him a “nigger,” although no eyewitness corroborated his assertion. Despite Walter’s bitterly professed certainty, ambiguities about the incident persist.


Of the play’s several plot threads, the principal one concerns the very real possibility that Walter will lose his apartment unless he settles. This becomes especially clear when he has over for dinner his ex-partner, a female detective named Audrey O’Connor (Elizabeth Canavan), who professes enormous admiration for Walter, and her fiancé, the plain-spoken Lt. Dave Caro (Michael Rispoli). Caro, his white officer’s shirt covered in ribbons and brass, is ambitious and has his eye on higher places; if he can convince the obstinate Walter to end his eternal lawsuit, he’ll make a major impression on the powers that be.


As the play wends its way toward the resolution of the apartment problem, it offers a cornucopia of dramatic riches, hilariously comic and passionately serious, with an assortment of complexly detailed and highly colorful characters; each makes a lasting impression based on how he or she interacts with Walter. Oswaldo, a recovering drug addict with father issues, is so fond of Walter he calls him Dad, although Walter’s wary of the guy’s shady past and acquaintances. Oswaldo has an endearing quality, but in this play you have to be careful about people you trust. As he sits at the breakfast table with Walter, Oswaldo speaks in his lively street patois about the importance of eating the right food (almonds and health water for breakfast), because comfort food, like pie, which Walter is eating, gives you “Emotionalisms.” The cynical Walter counters that whatever the so-called experts say is one day going to be reversed: “Almonds: don’t be surprised if we learn sometime in the future that Almonds cause cancer.”


Next we meet the skimpily dressed, physically ample Lulu, who also calls Walter Dad; from where he sits, Lulu has nothing but air between her ears. Told she’s an accounting student, Walter, nobody’s fool, wonders why, if that’s so, she moves her lips when reading her horoscope. One of her responsibilities is to walk the family dog, given to Walter as a companion after his wife died, but which Walter considers a pest, and which, though we never see it, offers opportunities for several funny wisecracks. Lulu says she’s pregnant with Junior’s child, delighting Walter with the prospect of grandfatherhood; however, complications that way lie.


Walter treats Junior, who sells hot merchandise out of his room, with authoritative disdain, although Junior responds with genuine affection and concern for his father’s well-being, begging him to settle his lawsuit and stop paying his “shyster” lawyers. Any advice about ending the case, though, is like lighting a bomb in the old man’s heart, especially when it comes from his son.


When it comes from the two cops, O’Connor and Caro, Walter’s pride, stubbornness, and anger know no bounds. Caro is as friendly, reasonable, and persuasive as it’s possible to be, even with his admittedly selfish motives, but the more he presses Walter the more intransigent the ex-cop becomes, and the more Caro is forced to show his true colors. Both Walter and Caro are poker players; this informs their confrontations, and the conclusion to their debate is essentially one of who’s the better bluffer. Ultimately, Walter raises the stakes dramatically. What he asks for left me feeling considerable distaste for him, yet I ultimately had to agree that in his moral universe, his request, egregious as it is, is perfectly appropriate. It’s somewhat more plausible than the final scene, which ends the play on a note of sentimentality that feels out of keeping with what’s come before. In Mr. Pendleton’s crafty hands, the pacing, energy, and tonal balance keep the perfectly chosen ensemble humming; freshness, conviction, and vigor, combined with authentic character objectives inform one memorable performance after the other. These actors hold you enthralled from the very first words spoken. Among the biggest takeaways are Mr. Henderson and Mr. Rispoli. Mr. Henderson’s rage against all that he’s gone through has Lear-like power, while Mr. Rispoli’s iron fist in a velvet glove negotiations make what could have been an unsympathetic role the opposite.


BETWEEN RIVERSIDE AND CRAZY deserves to be seen widely. It’s filled with dramatic and comedic surprises and twists, like the vivid scene in which a visiting Church woman (Liza Colón-Zayas, terrific) manages to combine the sexual with the spiritual in her ministration to Walter of God’s love. Mr. Guirgis’s vibrant dialogue has a salty quality that sounds like it comes straight from the streets, but is loaded with offbeat phrases and expressions that may sound accidental but that only a master word chef could cook up. As one tiny example, here’s a priceless bit from Oswaldo, speaking to Walter, early in the play, asking him to confirm that Oswaldo’s presence isn’t too much of an annoyance: “So I wanna know whatchu think about that, I mean—if that’s okay, I wanna know if my feelings about your feelings are the actual feelings that’s happening, and also whatchu think about that, like, honestly, so—like—whatchu think about that?” Although BETWEEN RIVERSIDE AND CRAZY’s universal praise is warranted, and it even may have Broadway possibilities, it still seems to be more of a near no-hitter than an actual one. Which doesn’t mean I wasn't crazy about it.
Posted by Samuel L. Leiter at 9:34 AM