54. Review of REVOLUTION IN THE ELBOW OF RAGNAR AGNARSSON FURNITURE PAINTER (August 13, 2014)

54. REVOLUTION IN THE ELBOW OF RAGNAR AGNARSSON FURNITURE PAINTER 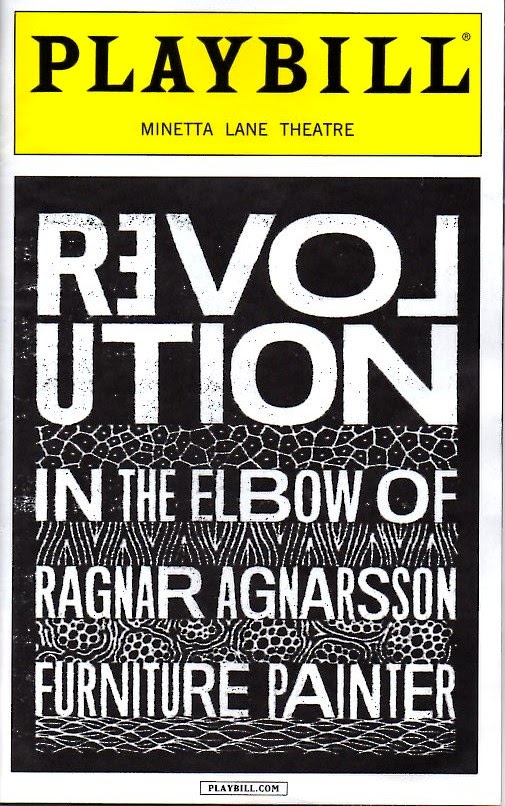 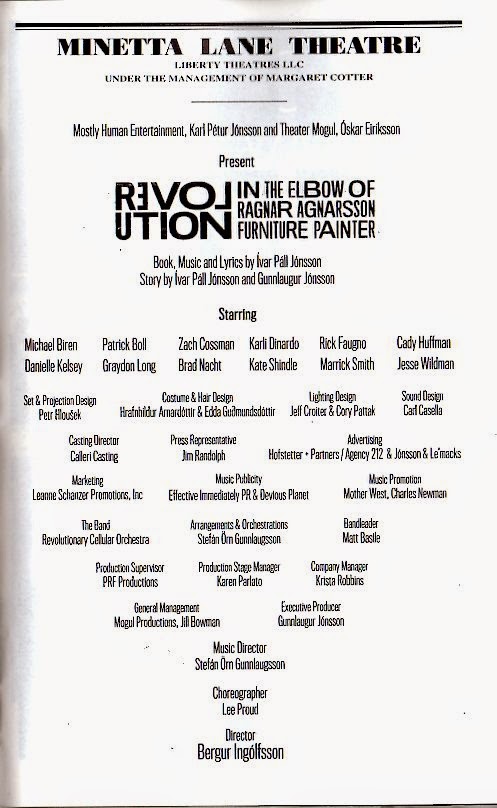 The subject of Iceland’s horrific financial crash in 2008 would seem very far from what one might expect to see dramatized in a New York show, but that’s exactly the inspiration behind a wonderful piece of recent theatre art. Unfortunately, the show I’m referring to, SAGA, was performed locally in March 2013, and, despite being a puppet play, was vastly superior to the innocuous new rock musical based on the same crisis now playing at the Minetta Lane Theatre. This is REVOLUTION IN THE ELBOW OF RAGNAR AGNARSSON FURNITURE PAINTER, a work that never fulfills the imaginative promise of its quirkily overstuffed title, and despite some flamboyant artistic touches strewn here and there, wastes a generally talented cast featuring stalwart Cady Huffman. 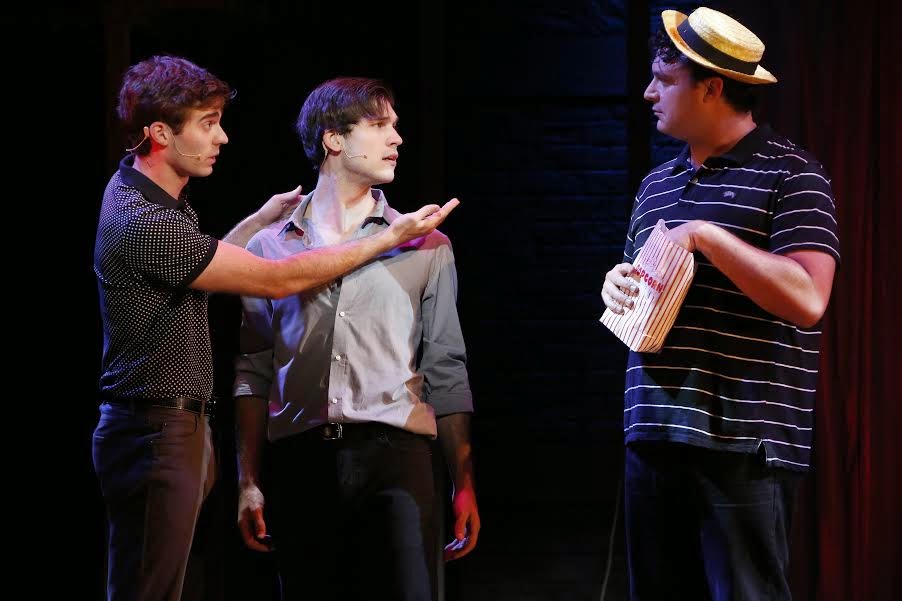 
Both SAGA and REVOLUTION, which I’ll call it for short, are highly theatricalized conceptual works that seek to explore the ramifications of the monetary meltdown via nonrealistic, even surrealistic means. As the show’s author (book, music, and lyrics), Ivar Pall Jonsson, told the New York Times, he wanted to tell the story without referencing “specific details and persons.” Executive producer Gunnlaugur Jonsson, the author’s brother (who also contributed to the story), said it was important to avoid being boring “because you have to explain complicated things. Doing it abstractly in a world that doesn’t exist, you can just get rid of all of that and get to the heart of the story.” All well and good, but when you make such a choice you have to be able to realize your conception in an artistically entertaining way. And sometimes simplicity leads to simplism.


The approach taken by SAGA is suggested in this paragraph from my review of it.


SAGA, at the Baruch Performing Arts Center, is a collaboration between Wakka Wakka Productions and the Nordland Visual Theatre company. The result is an exceptionally powerful puppet play, filled with tragedy, comedy, violence, and sex. Under the direction of Gwendolyn Warnock and Kirjan Waage, half a dozen puppeteers, all dressed in black with huge horse’s heads masking their faces, manipulate hand puppets and bunraku-like puppets that resemble Jim Henson’s creations to tell a story set in Iceland in 2008, when that nation’s three major commercial banks collapsed, creating vast economic turmoil. We see the effects of the crash on one family, the father, Gunnar (Kirjan Waage); the mother, Helga (Andrea Osp Karlsdóttir); and their boy, Oli (Andrew Manjuck). Led on by the predatory lending practices of the banks, the family builds a large house, buys an expensive jeep, and in other ways takes on crushing debt, only to have it all ripped away in the tidal wave of financial ruin that crashes over them. Helga and Oli leave for Norway, where she gets work, and the marriage falls apart. Gunnar, aided by what seems a vengeful spirit of Iceland’s past, goes on a maniacal rampage against the bankers and anyone else he feels created the problem, and bloody mayhem ensues; even the spirit goading him on gets his. The story, although taking place in distant Iceland, could as easily represent our own nation’s recent plight.


In REVOLUTION, when the audience enters it sees a huge video projection on the upstage brick wall, and the metal scaffolding in front of it, showing the middle-aged Ragnar loafing like the giant “couch potato” he’s called in a voiceover. As the voiceover continues, a very elaborate and well-executed series of projections informs us that there are “many advanced societies” inside his body, and we see maps that takes us from “the huge plains of Texass” to places like Eyesockette, Knee York, Hipsburg, and the like, all the way to “the somewhat naïve backwater” of Elbowville, “where the friendly inhabitants make their simple living fishing for gigantic lobsters in the lymphatic channels.” Lobsters are a running image throughout, shown on flags, coins, and even as a collar on an official’s cloak. “Heads or lobsters?” asks someone when flipping a coin. 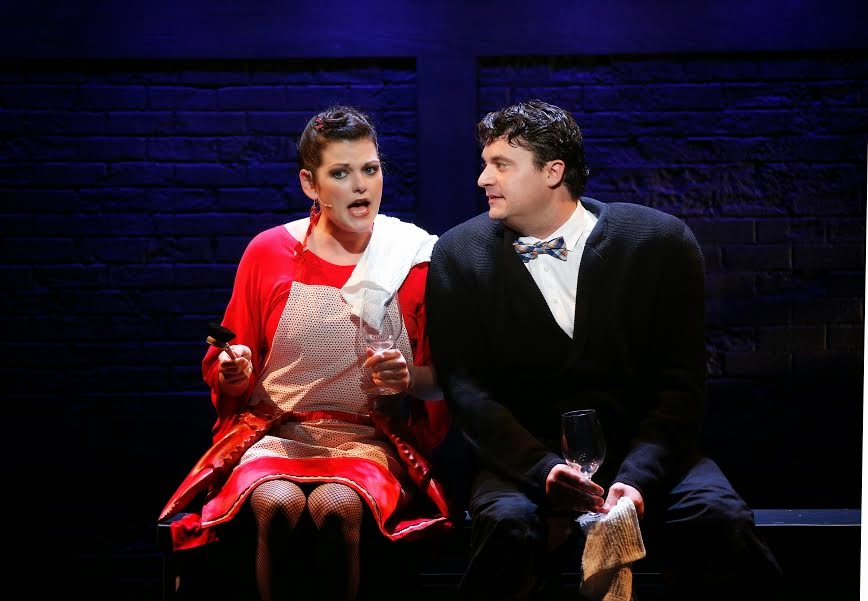 
Once we’re introduced to this allegorical world, the joke quickly wears off and the efforts to milk it for laughs become increasingly stomach-churning. There’s even a twee bit where a cold virus (a bluish beach-ball covered with spiky protrusions rolled on stage by an oddly dressed stage assistant) is treated as a cute pet dog called Gunnar. Nor must I neglect to mention that because Ragnar owns a complete VHS collection of Robert Redford movies, Bob is the god of Elbowville, and lives in a divine place called Hollywood. In addition to the various scenes where his framed image is projected on the rear wall, people are always saying “Oh, my Bob” when something surprises them, or “Thank Bob,” when something good occurs. Of course, some dare to go so far as to deny Bob’s existence. 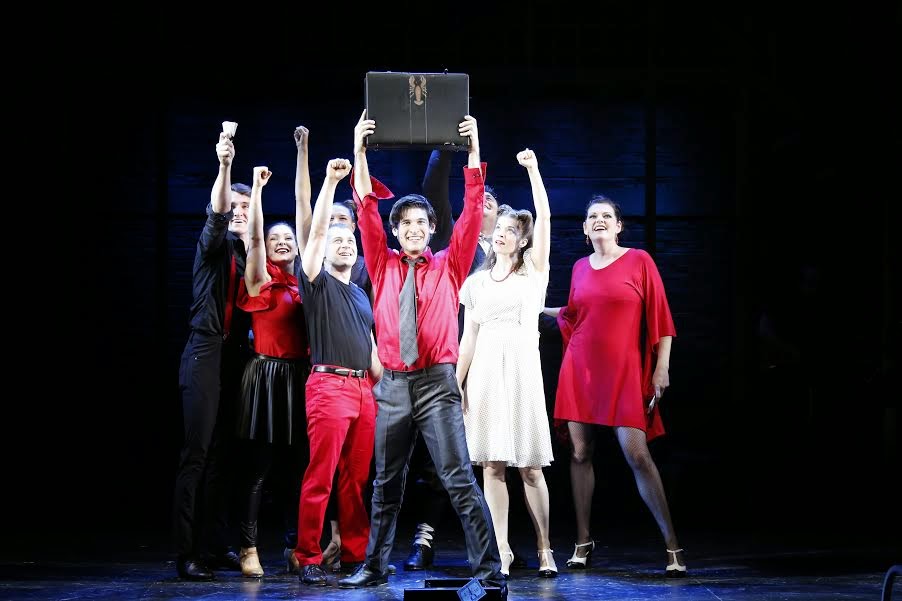 Marrick Smith (front), with cast of REVOLUTION IN THE ELBOW OF RAGNAR AGNARSSON. Photo: Carol Rosegg.


The show begins with a powerful image of someone blowing his brains out. This suicide serves as a sort of frame for the action, and the show returns to it toward the end. Soon we learn of the history of Elbowville, and of its founder’s legacy of “prosperity.”  Enter the three young brothers, Peter (Marrick Smith), Alex (Graydon Long), and Stein (Brad Nacht). A subplot emerges when the shy Alex and Brynja (Jesse Wildman), Peter’s girlfriend, are attracted to each other, setting up a brotherly rivalry. Fraternal relations involving each brother will undergo severe stress because of Peter’s manipulations.


Peter, boastful, self-centered, ambitious, and inventive, convinces Manuela (Cady Huffman), Elbowville's sexed-up blonde mayor (accompanied by Kolbein [Patrick Boll], her yes man), who wants to secure her legacy, to sponsor his Prosperity Machine, which produces Lobster Promissory Notes. “Oh. My. Bob. Oh, my Bob!” enthuses Manuela, who foresees “the age of affluence in Elbowville.” This machine, and its ability to produce promissory notes that can be loaned at will (all you need to do is sign a contract), creates a financial bubble that eventually is exploded when a credit rating company agent blows the scheme sky high as he sings:


Easy money
Is a dangerous thing.
It leads to bingeing and investing in some hare-brained
Schemes.


Everyone, including Peter's brother, Stein, and his wife, Asrun (Kate Shindle), go through an experience not unlike that of Gunnar's family in SAGA. This is Mr. Jonsson’s reductionist method of dramatizing Iceland’s financial panic and, despite the price that Peter eventually pays, the effect is trivialization, a fate SAGA managed to avoid. REVOLUTION goes off in other directions as well, but they only weigh the show down. 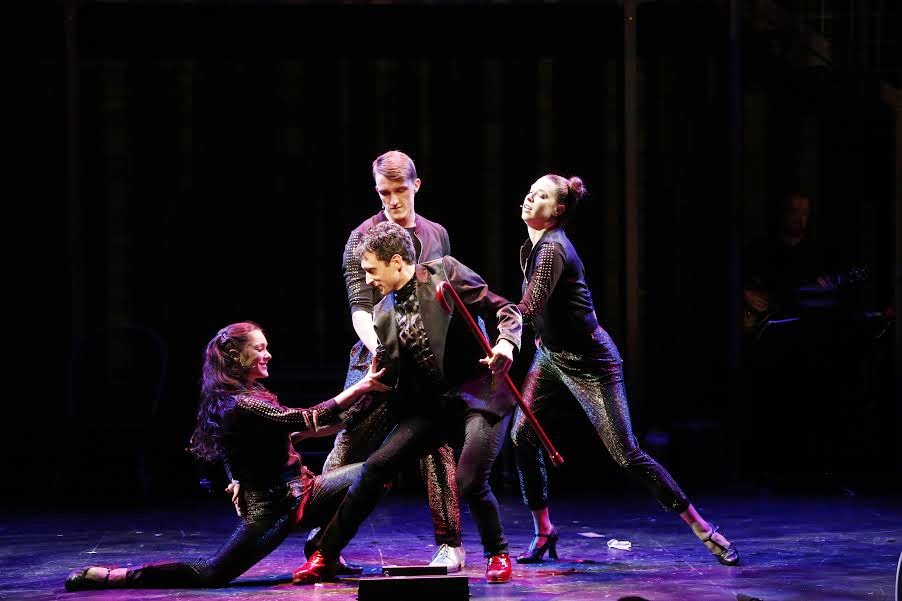 
Director Bergur Ingolfsson’s lively production often has actors entering by rushing down the aisles (keep your feet inside if you're sitting there), and even includes some brief moments of interplay with spectators in the front rows. A five-member band (the Revolutionary Cellular Orchestra), situated upstage left, is led by Matt Basile and includes percussion, guitars, synthesizer, and piano. Mr. Jonsson’s derivative-sounding indie-rock music makes very little impact, and too many of the numbers are of the big-voiced, shouting variety. There’s little positive to say about the lyrics either, like those quoted earlier, or these, in a song the brothers sing when making an oath of mutual loyalty.


And more of the same, including another dozen iterations of “Let’s make an oath” and ending with “Whoah. We are brothers first, until we die. This is our oath.” Song after song remains on this level of triteness. Iceland’s biggest musical hit was MARY POPPINS so maybe they’re not ready for Sondheim yet.


Lee Proud, a British choreographer, is responsible for the various dance sequences, most of which are standard issue Broadway-style routines, but there’s a standout tap dance number. It makes an odd fit in this world, but it has a certain offbeat charm and is well executed. 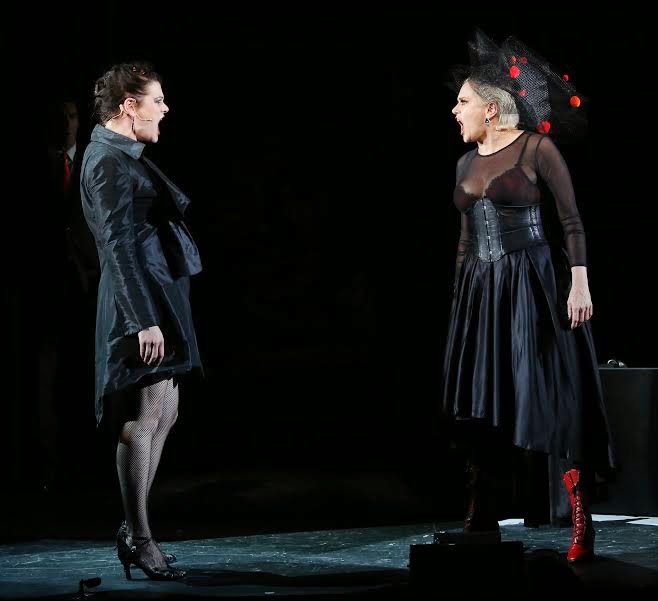 
The dialogue is as banal as the lyrics and, sometimes, painfully unfunny. Oscar Wilde has nothing to fear from remarks like Brynja’s, when asked where her pet cold virus is: “He’s at home. He has a bad cold. There’s snot everywhere. It’s a total mess,” to which Alex responds: “Well, I guess that goes with the territory. Just be careful not to be too sterile. They can easily die if they catch cleanliness.” Biological notions constitute most of what passes for humor, including a piece of art Manuela describes as “my uterus,” which she had bronzed after having a hysterectomy. In Mr. Jonsson’s universe hysterectomies are hysterical.


Most of the performers display strong voices and several, like Mr. Smith, are also skilled dancers. None, however, is able to overcome the cartoon exaggerations of their characters and bring them to life in an interesting way. The Tony-winning Ms. Huffman (THE PRODUCERS) acts and sings with her usual electric vivacity, but her Cruella Deville-like Manuela is a cliché and there’s not much she can do with it. It would be nice one day to see her in a role that didn’t focus on her as a voluptuous sex object. And also in one that doesn’t require her to say things like, “Do you find my uterus sexy?” Kate Shindle as Asrun also sings impressively, but she, too, has to play a character with very little character. 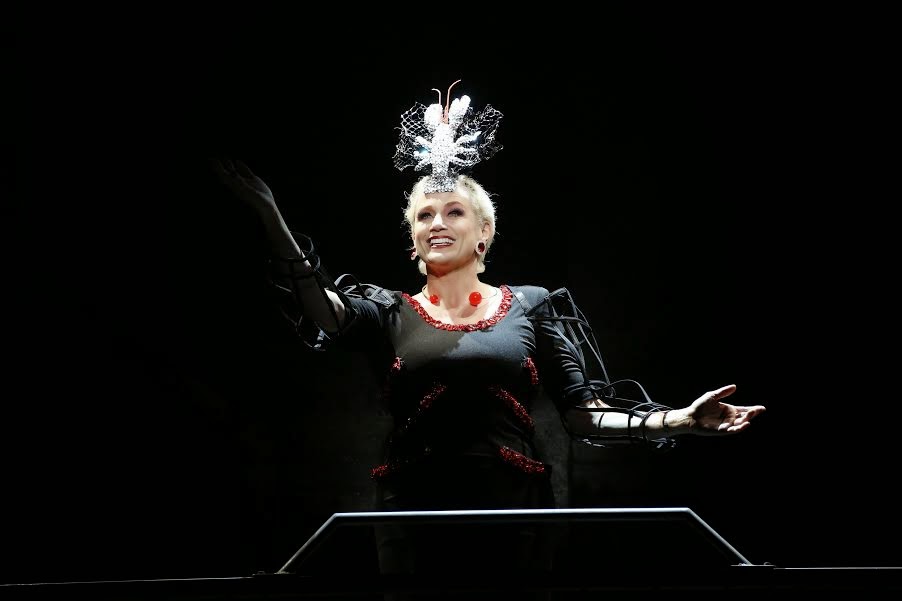 
REVOLUTION’s production design looks more expensive than the average Off-Broadway show’s. Still, Peter Hlousek’s scenic design is the increasingly familiar one of a bare stage backed by a brick wall with bi-level scaffolding and stairs at either side. Mr. Hlousek is also responsible for the extensive and sometimes very sophisticated use of video and still projections, which are often memorable. Kudos go as well to lighting designers Jeff Croiter and Cory Pattak for their creation of a rather complex lighting system in the rock musical mode, including multiple criss-crossing beams of smoky light. A lot of attention has been paid to the costumes, by Hrafnhildur Anardottir and Edda Gudmundsdottir; the clothes, by and large, are in combinations of black and red, with heightened futuristic touches, mainly on the female characters, where black leather is much in evidence. Ms. Huffman’s final getup is more bizarre than attractive, which could also be said of Mr. Nacht’s jacket with its inflated shoulders (his character, we learn, can’t afford real shoulder implants).


What REVOLUTION IN THE ELBOW OF RAGNAR AGNARSSON needs is divine help from Bob Redford. We should all join Alex, Peter, and Stein when they pray to him: “Oh dear Bob of Hollywood, protect us! Oh thou Great Gatsby and Horse Whisperer in the sky. . . . I will be your Candidate even if I’m just Ordinary People. Let a River Run Through It.” I suspect, however, that Bob, if he were listening, might respectfully respond, "ALL IS LOST."
Posted by Samuel L. Leiter at 5:19 PM